Based on the name alone, you can probably guess Twisted Fish is a slightly more advanced version of the classic children’s card game Go Fish (and you’d be right). The basics of the game are the same but there are some rules changes that add some new twists to an old game.

To start Twisted Fish, find the quick reference cards and jokers, set them aside, and then shuffle the deck thoroughly. Pick a dealer who then deals eight cards face down to each player. The rest of the cards are placed in the middle of the table face down to serve as the “fish pond” (the draw deck). 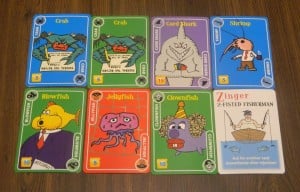 This is a sample starting hand in Twisted Fish. This player can ask for crabs, card sharks, shrimp, blowfish, jellyfish, and clownfish. They also have a zinger card in their hand.

The player to the left of the dealer goes first and asks any other player for a specific type of fish AND color of card. In order to ask for a card, a player must have at least one of that type of fish in their hand (so if they are asking for a card shark they need to have a card shark already in their hand). The player who was asked for a card must truthfully say whether or not they have it and if they do have it, they must give it to the other player. The other player gets another turn and can ask any player (including the same one) for another specific card. They can continue asking until they ask someone and don’t receive the card they asked for. 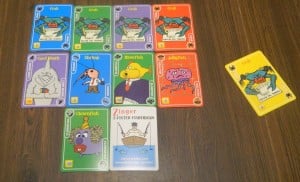 Since this player has four of the five crabs, they decide to gamble and ask one of their opponents for the yellow crab they are missing. Luckily, they had it and the asking player takes it from them.

If the player doesn’t have the requested card, they tell the asking player to “go fish.” That player draws a card from the fish pond and looks at it to see if it is the card they asked for. If it is (this only happened once in our game), the player immediately flips it over, shows all players, and takes another turn. If not, it’s the end of their turn.

If a player has the requested card, they are supposed to be truthful. Untruthful players who get caught “telling a whopper” at any point in the game lose all points they have gained so far in the round. In addition, the rules say they should lose all respect from other players and “be shunned as an unclean outcast.”

As soon as a player acquires a set of five of a kind (five of the same type of fish), they lay the “full basket” down on the table in front of them. These cards are protected (and no longer part of their hand) and will score points for the player at the end of the game. Some types of fish are more valuable catches than others. For example, a full basket of card sharks scores 15 points per card. Whales, blowfish, starfish, and clownfish score ten points each. Barnacles, jellyfish, shrimp, eels, crab, dogfish, hammer head fish, and flying fish are only worth five points. Only cards in full baskets will score points for the player, cards still in hand when the round ends subtract points from a player’s total score. 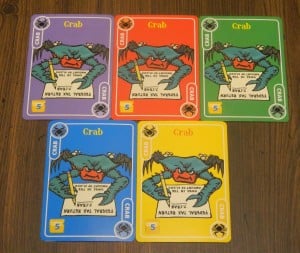 Since the player now has all five of the crab cards, they can place them down on the table to create a full basket.

There are some special cards in Twisted Fish, which are called “zinger cards.” The eight zinger cards allow players to cheat the rules, look at their opponent’s cards, and possibly even steal them. Each card says what it does (I’m not going to describe them all) and when and how to use it. Zinger cards can only be played once and are shown to the group, played, and then discarded face up next to the fish pond.

Twisted Fish ends when a player asking for a specific card acquires it and the card completes their last full basket in their hand (in other words they run out of cards). Players count up all the fish they scored (and subtract the point values of any fish they still have in their hand and -25 points for each unused zinger card). The player with the most points wins Twisted Fish. 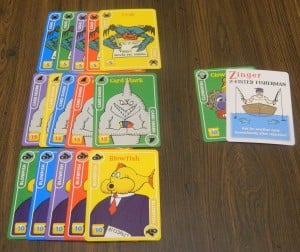 The game has ended and it is now time to tabulate the scores. This player gets 25 points for their full basket of crabs (5 x 5), 50 points for the blowfish (10 x 5), and 75 points for the card sharks (15 x 5). Unfortunately, they were stuck with two cards in their hand at the end of the game. They lose ten points for the clownfish and twenty five points for the zinger card. Since they scored 150 points and lost 35 points, they end up with a score of 115.

The game comes with a small rubber duck and the rules have instructions to visit the publisher’s web site for more details. After a little bit of research, the duck is pretty much pointless. It is simply used when a player knows another player has four of the five cards needed for a set and they ask for the fifth but don’t get it. Players puts the duck in front of the player they suspect is close to a set to let them know they are a “sitting duck.” In other words, it has no effect on the game.

Twisted Fish is slightly better than Go Fish, but that really isn’t saying much. Since Go Fish isn’t exactly a good game (unless you are a six year old), this game would have to make a lot of great improvements in order to pull out an average rating. While I do like some of the changes, they aren’t enough to keep Twisted Fish from scoring just a one-and-a-half out of five from me.

The new mechanics I like are forcing players to make a set of five before banking them and making some of the fish worth more points than others. These changes help add some more memory and deduction to the game. I also would have liked the addition of the zinger cards if they weren’t so lame. While some games have special cards which wind up being overpowered, the ones in Twisted Fish aren’t all that special at all. If the game upped their strength and added more of them, zinger cards would have been a worthwhile addition to the game.

Twisted Fish starts pretty slowly since it is pretty much impossible to guess correct cards until you kind of know what types of fish each player has (and then it becomes a race between players who share the same type of fish to try to complete their sets before the other player steals all their fish). You also have to draw a lot of the cards in the fish pond to make the odds of asking and receiving a card a bit higher. The game does require quite a bit of memory, some solid deduction skills, and even some bluffing (in some cases you might want to ask for a card you already have or for a card you don’t really want that much) to excel at it but the game is ultimately pretty boring to play.

One thing I don’t like about the game is the luck element. With just one bad guess you can basically give away your entire near set to a rival, who will then make a full basket out of them. Towards the end of the game, guessing correctly becomes even more important because it is much easier to make sets once there are less fish to pick from. In our game, I was struggling mightily (I only had one full basket until the end of the game) but came out of nowhere to win because of a couple bad guesses by my opponents. While memory and deduction skills are useful, the game ultimately comes down to guessing, which isn’t really a good thing in gaming.

The art style in Twisted Fish is very, very odd. The fish are drawn so poorly that it’s almost funny. I’m not sure if this was a design choice (to make the game more quirky) or due to a lack of money spent on the art but it definitely isn’t good. However, some of the poorly drawn fish did make us laugh so at least the art wasn’t boring.

The only people I would recommend Twisted Fish for are parents who have young children that love Go Fish. This game is still very easy to learn and at least makes Go Fish a bit more difficult and playable for the adults. The game is pretty cheap on Amazon but is filler at best for other gamers.

Well, I think it is the best game ever made... so, you got that wrong.

Also, it can totally be played by all adults, it is incredibly challenging to remember who had what, especially after a few adult beverages.

Please don't call Jody's art, "...very, very odd" he is a good friend of mine and I don't think he would appreciate that.