Scrabble is one of the most popular board games of all time as most people have probably played it at some point in their lives. Scrabble was popular enough that from 1984 to 1990 as well as in 1993, a game show based on the board game ran on NBC with the obvious title of Scrabble. TV Scrabble is an interesting board game as it is a board game based on a television show that was based on a board game. As the show was canceled when I was pretty young I don’t remember ever watching the show. Without any prior knowledge of the game show, I have to say that I found TV Scrabble to be a pretty boring board game.

How to Play TV Scrabble

Choose the gamesheet you would like to use and if it isn’t already folded fold it in half and then fold it in half again. Push up all the slides on the gameboard and then slide in the side of the gamesheet for round one. Choose which player/team will be the “Champion” and which will be the “Challenger”. The player/team who starts the first round is dependent on what is wrote on the card.

A round begins with the free letter being written in the center star of the playboard and a box drawn around the spaces that the current round’s word occupies. 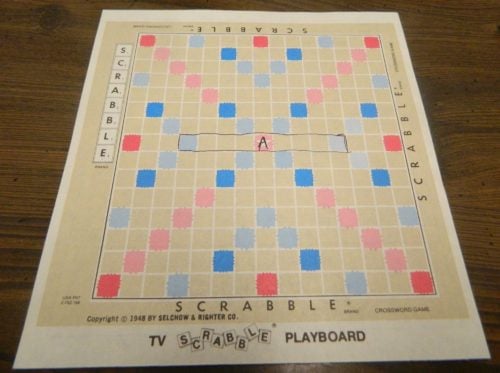 The first word has been setup with the letter “a” being placed in the middle square. The players then outline the spaces occupied by the word.

On a player’s turn they will get to choose two of the numbered slides. These slides are pulled down halfway to reveal two letters. The player chooses which of the two letters they would like to slide down first. 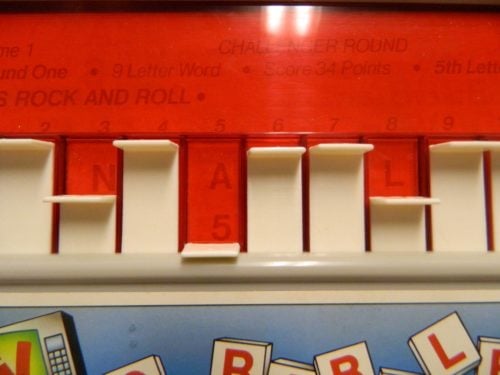 The player has chosen to lower the three and eight slides halfway revealing the letters N and L.

The slide for the chosen letter is slid all the way down. If a number is revealed the current letter is added to the corresponding spot on the playboard. The player can then either make a guess at the round’s word or they can slide down the other slide that is already halfway revealed. If there are no slides that are already slid halfway down, the player gets to choose two new numbers. 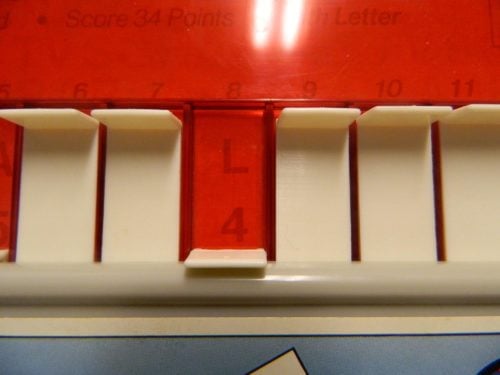 The player chose to reveal the L. The L is the fourth letter in the current word.

If when a slide is slid down it reveals a *, the player’s turn ends immediately. The next player will get to chose one or two numbers to partially reveal so they have two options to choose from. 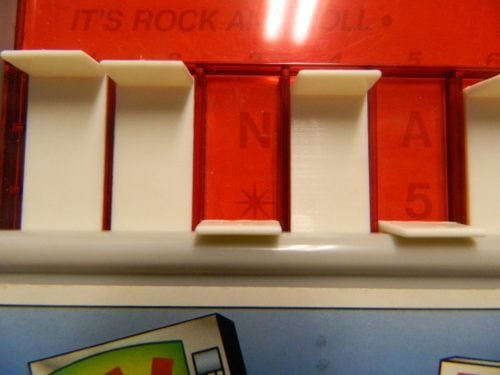 The current player revealed a blocker so their turn ends immediately. 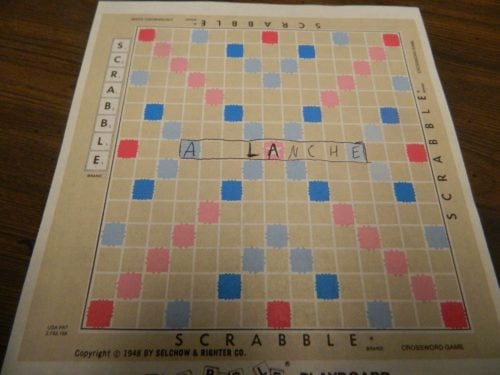 The last letter revealed was the first letter in the word. The player guessed the word “avalanche” so they score the points for this round. Since they guessed after a letter on a light blue space was revealed, they will score 25 bonus points. 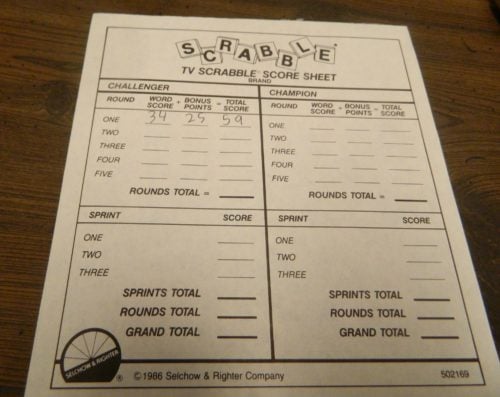 The challenger team was able to correctly guess the word after one of the light blue letters was revealed. The player scores 34 points for winning the round plus 25 bonus points. 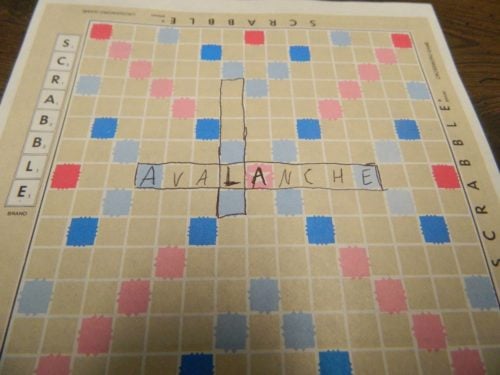 The players have started the second round. The second word uses the L from the previous word.

After five rounds of “Round Play” the game moves onto the “Sprint Rounds.” In a sprint round the players/teams compete to be the first to ring in with the correct word. Place the sprint meter between the two players as it will be used to see who rang in first. The sheet for the next round is inserted.

The first player (the player who lost the previous round) slides down the slide under the number one. If neither player wants to guess the word, the other player slides down the slide with the two above it. Players alternate sliding down the next slide until one of the players think they know the round’s word. The first player to press the button on their side of the sprint meter gets to guess the word. The player reveals their guess and all of the slides are slid down. If the player was correct they get the points for the round. If they were wrong, the other player gets the points. If neither player guesses before the final letter is revealed, neither player scores points for the round. 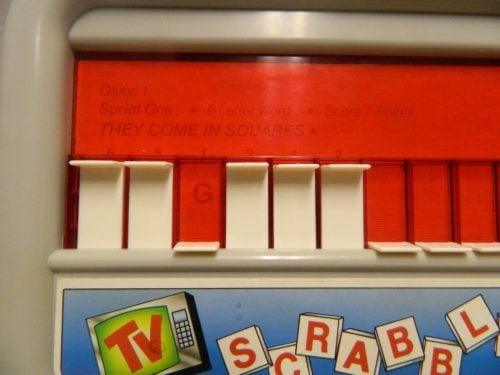 A sprint round has begun. The player has revealed the letter under the number one which was the third letter in the word.

The game ends after eight rounds have been played (five round plays, three sprint rounds). Players tally up their points for all of the rounds. The player with the most points wins the game. 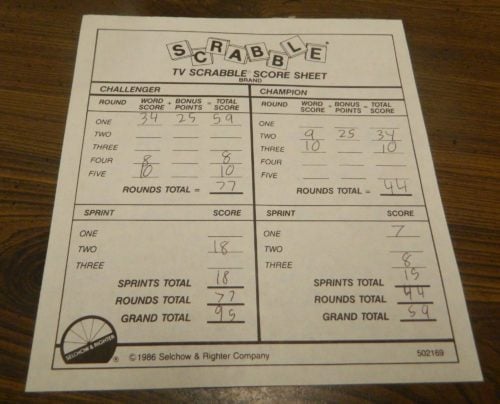 My Thoughts on TV Scrabble

As I didn’t really know anything about the gameshow before playing the board game, I am going to quickly explain the game show to people who like me are unfamiliar with it. For the first five rounds players would choose which of two revealed letters they believed were in the current round’s word. If the letter was part of the word they could either take a guess at the word or they could see if the other letter was in the word. Whenever a player picked a letter that was not part of the word, play passed to the other player. Players would play five different rounds to determine who would face off in the final round. The final round consisted of a speed round where the two players would compete to see who could guess a certain number of words quicker.

Despite having never actually seen the game show, after reading a description of the show I have to say that TV Scrabble seems to be a pretty good representation of it. The main portion of the game seems to play almost exactly the same with only a few slight tweaks in order to make it work as a board game. The final round of the game show appears to have been changed quite a bit though. Instead of both players competing to see who could guess all of the words quicker, both players play at the same time trying to guess the word before the other player.

For people who have never seen the show or played the board game before, I would say that it shares things in common with Scrabble and yet plays quite a bit differently. Instead of using tiles to form words to score points, you need to guess words that have already been chosen for the game. Players are given a clue about the word and then letters are then revealed until one of the players is able to guess the word. After thinking about it for a while I actually think TV Scrabble plays more like Wheel of Fortune than Scrabble.

With no prior experience with the television show I have to say that TV Scrabble is a very generic and sometimes boring word game. In general I don’t really have strong feelings either way about the word game genre. The problem with most word games is that there really isn’t a lot of creativity in the genre. Very few word games do something significantly different than any other word game. TV Scrabble falls victim to this problem since outside of a few unnecessary mechanics it doesn’t do anything that I haven’t seen done in several other word games.

The other reason why TV Scrabble is worse than Wheel of Fortune is that the rules are just too convoluted. Instead of just spinning the wheel and guessing a letter, you have to first choose two numbers. Then you have to choose from one of the revealed letters. If that letter is in the word you then have to add it to the playsheet. There are a lot of unnecessary steps to deal with in order to play the game. While some of the clunky mechanics are due to turning a game show into a board game, I think the designers could have done a better job streamlining the game.

Another problem with TV Scrabble is the fact that the scoring kind of feels like a mess. The problem with the scoring is that some rounds are worth considerably more than others. Not even factoring in the bonus points, in the game I played one team won a round worth more points than two to three rounds won by the other team. The higher valued word was more difficult but it wasn’t that much more difficult. Then you have to factor in the bonus points which mess up the scoring even more. If you are able to guess a word after a letter on a bonus square is revealed you get additional bonus points. While I am guessing this was added in order to get players to guess earlier, these bonuses can be way too valuable. If you are able to get one of the more valuable bonuses you can score more points from one round than the other player could get in all of the other rounds combined. As I don’t really think guessing after one of the bonus letters are revealed is any more difficult, it just seems to add a lot of unnecessary luck to the game.

While this might be partially due to the age, I didn’t particularly care for the components included with the game. Including fifty different games seems like a decent amount but there isn’t a lot of replay value unless you wait long enough that you forget the words used in the games. In addition to the quantity of games, I am not a huge fan of the design of the gamesheets in general. It is kind of a pain folding and unfolding the gamesheets in order to get them to fit inside the gameboard. The biggest problem though is with the gameboard itself. Maybe it was just my copy but whenever I lowered one slide I had to hold all of the other slides in place to prevent them from falling down revealing the rest of the letters. If this happens during the game it will significantly impact the outcome of the round.

I didn’t really care for TV Scrabble but that doesn’t mean that it won’t be for anyone. As I already mentioned the board game does seem to be a pretty good representation of the game show. If you were a big fan of the game show I think you could get quite a bit of enjoyment out of the board game. I can also see the game appealing to people that really like word games. While I think there are considerably better word games out there, if you are a big word game fan you can do a lot worse since outside of some convoluted rules there is nothing terribly wrong with TV Scrabble.

Should You Buy TV Scrabble?

Having never seen the TV show I didn’t have high expectations for TV Scrabble and I really wasn’t disappointed. The biggest problem that I had with TV Scrabble is that it really isn’t that much different from a lot of other word games. I think you could make a good argument that TV Scrabble plays just like Wheel of Fortune but more clunky. TV Scrabble has too many mechanics that just add unnecessary steps to the game. I think these areas could have been streamlined in order to make a considerably more enjoyable experience. Add in that the components are sub-par and I have played quite a few better word games than TV Scrabble. If you really liked the TV show or word games in general though I could see you getting more out of the game than I did.

If you would like to purchase TV Scrabble you can find it online: Amazon