To find the most pairs by the end of the round.

When the tray is removed the game begins. All of the players play at the same time. Players try to find matching pairs of tiles on the gameboard. The matching tiles must have a free side in order to be removed. When a player finds two of the same tiles that have free side, they remove the tiles and place the tiles by them as a pair. 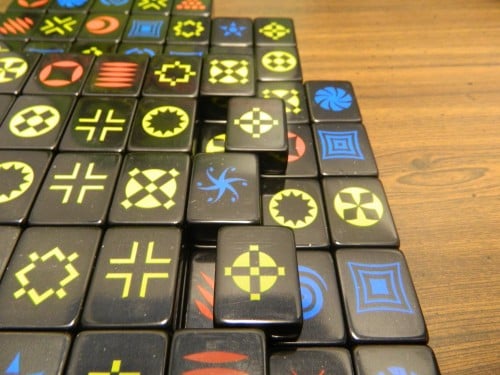 These two tiles that are sticking out are a pair and both have a free edge. The first person to find this pair can claim it and earn a point.

Players need to be careful when they remove tiles though since some of the symbols look similar but have slight differences which make them different and not a proper pair. 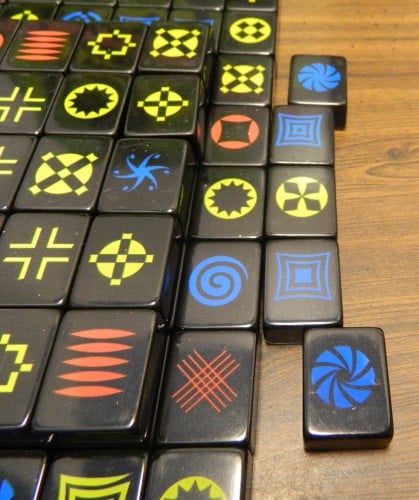 The two blue tiles sticking out may look like a pair but they aren’t since there are subtle differences between the two symbols.

The game ends when all of the tiles have been removed from the board or there are no more matching pairs that can be removed. Players look at all of their matched pairs to determine if they are all correct. If two tiles aren’t actual matches, they don’t count as a pair. Players add up their correct pairs and whoever has the most pairs wins the game.

If I had to describe TurtleMania in just a couple words I would say that it was speed Mahjong Solitaire. For those of you not familiar with Mahjong Solitaire it is an old Chinese game where players lay out Mahjong tiles and try to remove matching tiles from the gameboard. Most people are probably familiar with the free version of the game included on their computer that they occasionally play in order to kill some time. TurtleMania basically plays like that but with multiple players playing at the same time.

Regular readers of this blog will know that I love speed games. There is something about a quick speed game that I find enjoyable. I like the competitiveness of all the players playing at the same time as they are trying to win the game. Most speed games are card games where you are trying to match different shapes, numbers or colors. TurtleMania is a little different in that you are trying to find matching tiles following the rules of Mahjong.

Being the occasional Mahjong fan, I was excited to try out the game since I thought it was a clever idea for a game. I was not disappointed with the game. The game is fun especially if you like speed games. While it plays similar to other speed games, the Mahjong rules make the game interesting since you need to balance speed with accuracy as you try to grab valid tiles. If you like speed games and Mahjong (two totally different games I know), I think you will really enjoy Turtlemania.

Despite coming from a really relaxing game like Mahjong, Turtlemania can be a chaotic game. All of these games where everyone plays at the same time are chaotic but Turtlemania might be one of the more chaotic games. Since everyone is playing at the same time, people will be grabbing tiles from everywhere at the same time. Players’ hands will get in each others way and your view of the board can be obstructed by the other players. This chaos does accidentally move some of the tiles around but the game is fun nonetheless. If you hate these type of free for all games though I don’t think you will like Turtlemania. I only played the game with three people and I can’t even imagine how chaotic the game would be with six players. Based on my experience I probably wouldn’t recommend playing the game with more than four players.

While you are going to want to grab tiles as quickly as possible, you also need to look at the tiles carefully because almost all of the symbols have another symbol that looks very similar but is slightly different. I think the game could have made the symbols a little more distinct but I like that the game forces you to think before grabbing tiles. The one problem with this though is that the official rules have no punishment for grabbing an incorrect pair other than not getting credit for the pair. A house rule that my group adopted is that you lose one point for every incorrect pair. This makes players look more carefully at their pairs before they grab them.

Without a doubt the biggest problem with Turtlemania is the fact that you will spend about as much time setting up the game between rounds then you will spend playing the actual game. The typical game of Turtlemania takes around three to five minutes. I actually like that the game is so quick. The problem is that the setup also takes around three to five minutes. It is not a good thing when a game’s setup takes as long as the game takes to play.

It’s too bad because the game actually does its’ best to try to reduce that time as much as possible. The tray included with the game makes it quite easy to set up the tiles. The process of setting up a new game is quite simple other than trying to keep the same symbols away from one another. You have to purposely separate similar tiles after each game since by playing the game you are sorting the tiles into pairs.

I give the game credit for doing a good job making the setup as simple as possible. Unfortunately there is nothing the game could have done to further reduce the amount of time required to setup the game. The game has to be set up after every game and I can’t think of any way they could have made the process faster. To play the game you just have to deal with the setup time which may drive some players nuts.

In addition to the tray that makes setup really easy, I have to give the game a lot of credit for the rest of the components. The tiles are really nice. The artwork is simple but works well for the game. The only real complaint with the components is that the setup tray is pretty thin and may be susceptible to damage. It is not surprising that the components for TurtleMania are so good since SimplyFun has a reputation of including high quality components with their games.

While you wouldn’t think Mahjong would work well as a speed game, TurtleMania does a surprising good job. The game is fast and chaotic but still retains the skill of finding pairs like in Mahjong. If you like speed games I think you will like Turtlemania as well. The only major problem with Turtlemania is that the game takes almost as long to set up as it takes to play. This doesn’t ruin the game but can get frustrating.

Do you like Mahjong and speed games? If so I think you can have quite a bit of fun with Turtlemania and you should look into picking up the game. If not, I don’t think the game will be for you.