Almost three years ago I looked at the board game Rummy Royal/Tripoley/Michigan Rummy. These three games are variations of the same basic game and have been around since at least the 1930s. The three games still appear to be pretty popular as they still have a lot of fans to this day. If you read my review though, you will know that I wasn’t much of a fan. To me the game just felt like a way to combine a number of card games together, with the end result being a card game that I found to be kind of dull. As I didn’t like the game that it was based on, I can’t say that I had high expectations for the spinoff Tripoley Dice. Honestly the only reason that I picked it up was that it was only $0.50, and I hoped that the dice would mix things up enough to maybe fix some of the issues that I had with the original game. Fans of the original game that find the idea of a dice game intriguing should enjoy Tripoley Dice, but I didn’t really care for the game.

How to Play Tripoley Dice

Tripoley Dice consists of three different games. The players will play all three games in order. The player who scores the most points between the three games will win.

In each of the games you will roll all nine of the dice. You can choose to keep any number of the dice you rolled, and then re-roll the remaining dice.

In Hearts Jokers do not count as wilds. Some cards can also be used in two combinations. For example a Queen can score for the Queen combination as well as the Queen-King combination.

After you have finished your turn you will write down your total in the Hearts column of your score sheet. Points are scored as follows:

The player who scored the most points in Hearts will start Poker. If there is a tie, the tied players will roll the same die. Whoever rolls higher with the die will start the round. Play will then pass clockwise.

Players will get to roll the dice at least twice in the Poker round. If a player rolls a Joker on their last roll and decides not to use it in scoring, they can roll again. If you keep rolling Jokers, you can keep rolling the dice.

Jokers can also be used as wilds in various scoring combinations.

At the end of your turn you will score points for the combinations that you were able to complete. You will write down your score in the corresponding section of the score sheet.

The various combinations that you can roll in the game and the number of points they score are as follows:

These are the dice that the player rolled after their second roll. As they rolled a Joker they can choose to either use it in scoring or roll the dice again. If they choose to score they can score a couple different ways depending on how they use the Joker. If they use the joker as a seven or Queen they will score 40 points for a straight and 10 points for the pair of Jacks. Otherwise they would use the joker as a Jack to create four Jacks which will score 70 points.

In Michigan Rummy the players will take turns trying to roll numbers in sequential order. The round will continue until all of the players together have rolled a sequence from two to ace.

The first player will start by trying to roll twos. They will then try to roll a three and so on. Players can hold dice of future numbers, but they won’t score points if the numbers before them aren’t rolled.

At the end of your turn you will score five points for each dice in sequential order starting with the number that was last rolled before you started your turn. The next player will then try to extend the sequence by rolling the number after the highest number that you rolled. 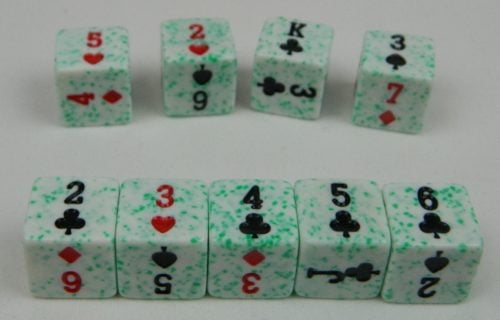 During this player’s turn they were able to roll a 2-6. They will score five points for each of these dice for a total of 25 points. As they rolled an extra two, three and five; these dice will score an additional 15 points for the player. The next player will start their turn by trying to roll a seven.

The round ends once the two to ace sequence is completed by all of the players. The player that completes the sequence can keep rolling until the end of their turn.

At the end of the round the players will tally up the points they scored during the round.

The game ends after all three games have been played. The player that scored the most points between the three games will win the game.

My Thoughts on Tripoley Dice

If I were to describe Tripoley Dice I would say that it actually feels a lot like what you would get if you combined the original Tripoley game with a dice rolling game like Yahtzee. That is not all that surprising with a name like Tripoley Dice. Like the original game the game is broken down into three individual games. Hearts and Poker are actually pretty similar as you score points for rolling certain combinations. Meanwhile Michigan Rummy plays like a climbing game as players try to roll numbers in ascending order. The player that scores the most points between the three rounds wins the game.

As I wasn’t a huge fan of the original Tripoley, I can’t say that I had high expectations for Tripoley Dice. Because of this I would like to preface the rest of this review by saying if you are a fan of the original game, your opinions of the dice game may differ from mine as well. For the most part the game lived up to my expectations. In a lot of ways the game feels very similar to other dice games that I have played that utilize card dice. There is actually a surprising number of these games out there. Some utilize more dice and others use dice with more faces/sides. The gameplay is pretty standard though. Two of the games basically play like Yahtzee with different card combinations that you have to roll to score points. While you have different combinations to roll in each game, the gameplay doesn’t really change all that much.

I found these two games to be okay, but they are far from anything special. They are quite easy to play. If you have any experience with Poker, you basically just swap out the cards for dice. Players basically get a number of turns to try and roll certain combinations. You can choose to keep whichever dice you want and then re-roll the rest. There is a little strategy to these games as you can play conservatively or try for riskier higher scoring combinations. It is usually pretty obvious what dice you should keep and which you should re-roll though. These games are far from deep, but if you are looking for some quick games where you don’t have to put too much thought into what you are doing you can have fun with them.

Probably the game that I liked the least was Michigan Rummy. Part of this was due to the rules not doing a great job explaining how the game is played, in particular the scoring. Unless we ended up playing the game wrong, I just didn’t find this game to be all that interesting. Players basically just take turns trying to roll the numbers next in sequential order. The only strategy in this game is deciding whether to to keep dice that are a couple of numbers away from the current number in the sequence. Otherwise the game relies entirely on luck. Whoever rolls the best will score the most points. All of the players might not even get the same number of turns in the game. I honestly found this game to be kind of dull as it is really basic with nothing particularly original about it.

Ultimately I didn’t find Tripoley Dice to be a great game, but it is not terrible either. The game is easy to play and plays really quickly. If you like traditional card games and think the idea of turning them into a dice game sounds interesting, I think you may enjoy playing Tripoley Dice. The main problem with the game is that it fails to do anything particularly original. I am not sure about the Michigan Rummy game, but the other two games are very similar to quite a few other dice games out there. The game has basically taken Yahtzee and swapped out the numbers with playing cards. The game is okay, but it doesn’t really do anything to stick out among the many other games in this genre. If you own another game in this playing card/dice game genre, I see no reason why you should pick up Tripoley Dice as well.

As for the game’s components I can only comment on the 1997 version of the game, but I was actually kind of impressed. The game just comes with the dice, a dice cup, and score sheets. The dice cup and score sheets are pretty basic. I actually liked the dice though as they are of a higher quality than I expected. The numbers and suits are engraved into the dice so they should last. I liked the dice quite a bit and wonder if they could be used for other card based dice games as they are pretty nice. Otherwise the game’s box is much larger than it needed to be as it could probably have been cut in half pretty easily.

Should You Buy Tripoley Dice?

For the most part Tripoley Dice is what I expected it to be. The game takes the original Tripoley and adapts it to be played with dice instead of cards. In my opinion Tripoley Dice is pretty much on par with the original game. It may be slightly better just because it plays quicker. Two of the games play like a typical dice game like Yahtzee where the numbers are replaced with cards. These games aren’t particularly deep, but you can have some fun if you are looking for a game where you don’t have to put too much thought into what you are doing. I can’t say that I was much of a fan of Michigan Rummy though as players just take turns trying to roll the next numbers in numerical order. This game relied almost entirely on luck and just wasn’t all that interesting in my opinion. Tripoley Dice is an okay game, but it fails to really do anything original. The component quality is pretty good though.

If you don’t really care for games like Tripoley and Yahtzee, I don’t see Tripoley Dice being for you. If you already own another game that utilizes card dice, I don’t see the game differentiating itself enough to be worth picking up. If you are looking for a simple dice game though and like the game’s premise, it may be worth picking up if you can get a good deal on it.