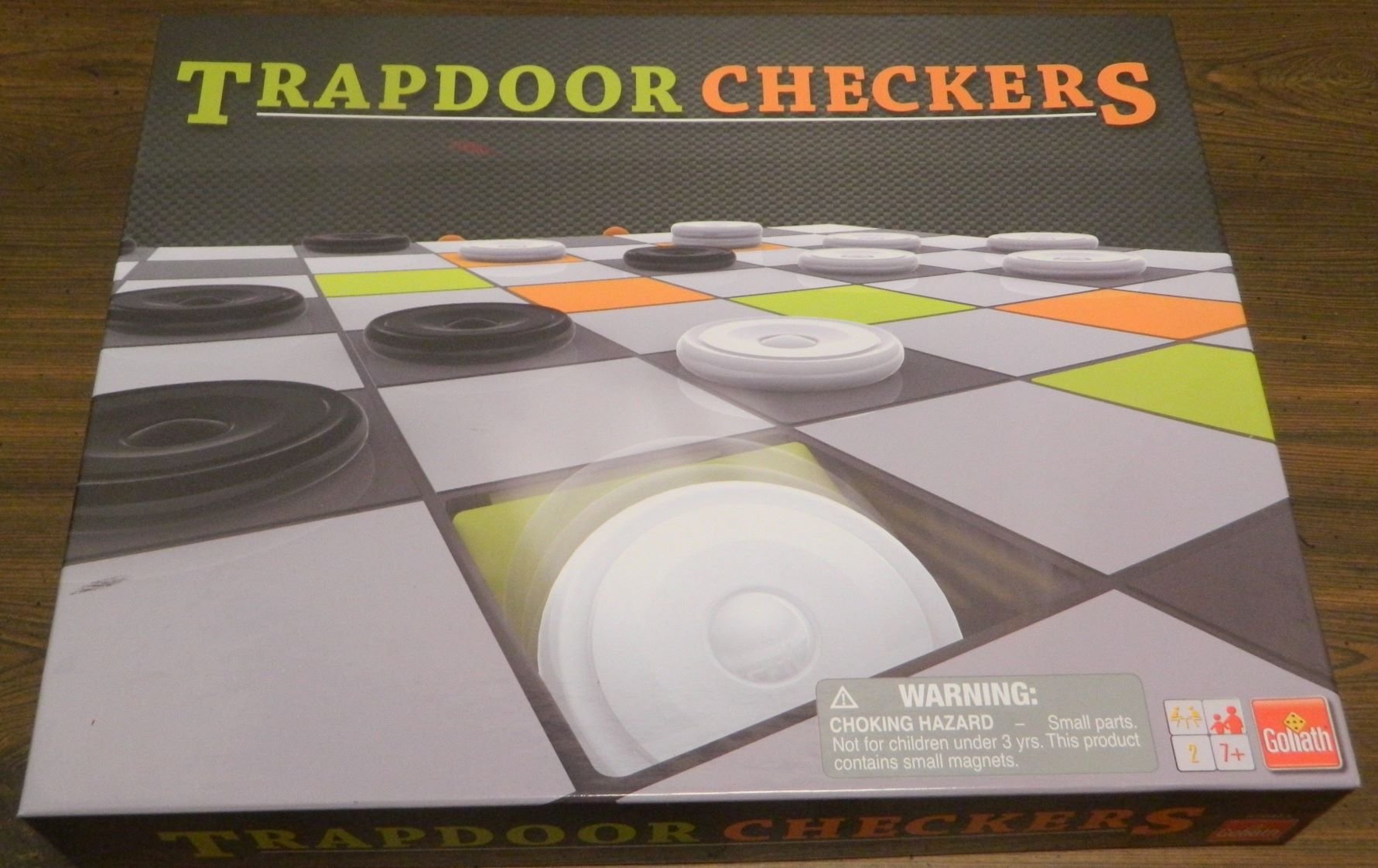 Created over 1,000 years ago Checkers is a classic board game that almost everyone has played at least once in their lives. Checkers is one of the first board games taught to most children as the gameplay is quite simple. At the same time though the game has a competitive scene as there are worldwide Checkers tournaments. I personally don’t have a strong opinion on Checkers. The game is not terrible, but there are many other games that I would play before I played a game of Checkers. With how popular Checkers is there have been quite a few variant games created over the years. Today I am looking at one of those games Trapdoor Checkers. The title for the game is pretty self-explanatory as it is Checkers with trapdoors added into the mix. Adding trapdoors to Checkers was an interesting idea that ultimately fails which makes Trapdoor Checkers worse than the original game.

How to Play Trapdoor Checkers If the player spins black the player will move one of their Checkers like in a normal game of Checkers.

If the randomizer shows green or orange they will pull one of the knobs of the corresponding color.

When using one of the knobs you will pull the knob one position in either direction. By pulling the knob some of the trapdoors will either open or close. After pulling the knob it will remain in that position until a player uses that knob on a future turn.

Any pieces that fall through a trapdoor are lost for the rest of the game.

On each turn the player will choose one of their pieces that they would like to move. Pieces are moved one space diagonally towards the other side of the board.

If a piece is next to an opponent’s piece and the space on the other side is unoccupied the player must use their piece to jump over their opponent’s piece. If this puts the piece in position to capture another piece the player must capture that piece as well. If a player has two or more capture possibilities they can choose which they would like to take. A player must capture a piece even if it would put their own piece on an open trapdoor space. All pieces that are captured are removed from the board.

Once a player’s piece makes it to the other side of the board it will be “crowned”. To crown a piece place a piece of the same color that was previously removed from the board on top of the piece. Once a piece is a king it can move one space diagonally in any direction. When a piece is crowned the player’s turn will end even if they could jump additional pieces.

My Thoughts on Trapdoor Checkers

As pretty much everyone has played Checkers at some point in their lives I am not going to waste much time talking about the Checkers aspect of the game. I don’t hate the game but I probably wouldn’t play it unless someone else asked me to play it. I have never been a huge fan of abstract strategy games as they can be kind of dull. I am also prone to occasional analysis paralysis and play pretty passively which don’t generally work well with these type of games. The Checkers mechanics are left untouched in Trapdoor Checkers. The game basically boils down to playing a traditional game of Checkers on a gameboard filled with trapdoors. This sounded intriguing, but it doesn’t work in action as it actually makes Checkers worse.

One of the selling points for abstract games like Checkers and Chess is that the games rely on very little luck. The players always have perfect information and win by implementing a better strategy than their opponents. This is probably what fans of Checkers appreciate the most about the game. The problem with Trapdoor Checkers is that it basically throws all of this out the window. While the Checkers strategy is still present in Trapdoor Checkers, the trapdoors end up adding a lot of luck to the game.

The reliance on luck starts at the beginning of every turn. Unless you can jump an opponent’s checker you begin each turn by spinning the randomizer. This determines what action you will be able to take on your turn. You may have a great move lined up and not be able to implement it because you don’t spin the right option on the randomizer. An opponent’s piece that you want to eliminate may be sitting on a trapdoor, but you can only eliminate it if you spin the right color. You could also be one move away from setting your opponent up for a move where you can capture several of their pieces. It doesn’t really matter though as luck could not be on your side and block the move you want to make. Checkers relies on players being able to have full information at all times and be able to make whatever moves they want. That is not the case in Trapdoor Checkers as it relies on you spinning the correct symbol for you to even have the chance to implement your strategy.

In some ways I think it would have been better to let players choose which action they would like to take on their turn. This would eliminate all of the luck from the game as you wouldn’t have to rely on spinning the right symbol. The problem is that this would create unintended issues. If an opponent’s piece is on a trapdoor you would obviously choose to activate that trapdoor in order to remove the other player’s piece from the board. I was thinking that you could maybe allow players to always move one of their pieces and then spin the randomizer to see if they could activate one of the trapdoors. This will let you always make a move on your turn and give you a chance to activate one of the trapdoors if you spin the right color. This would still involve some luck but it would eliminate quite a bit of it while still implementing the trapdoor mechanic.

In addition to letting a spinner determine what move you can make on your turn, Trapdoor Checkers encourages players to play even more passively than they normally would. I am far from a Checkers master so I am not sure whether the best strategy is to play aggressively or sit back and play as passively as possible. I know when I play though I always play passively. I try to move up my pieces as slowly as possible where I can keep blockers in so the other player can’t jump my pieces. Generally I don’t like moving pieces into the center of the board unless it is the only option available. This is reinforced by Trapdoor Checkers as all of the traps are located in the center of the board.

The center of the board in Trapdoor Checkers has only four spaces that don’t contain a trapdoor. If you want to play aggressively you have to move your pieces onto trapdoor spaces quite a bit. When I played Trapdoor Checkers though I tried to avoid these spaces as much as possible. I didn’t see any reason to put a piece in more danger than usual for no real reason. With one unlucky spin of the randomizer you could lose one of your pieces and have your strategy blown up. If you have to move a piece onto a trapdoor you want to move it off as quickly as possible. Maybe this is just because I am more of a passive player, but this lead to me wanting to be even more passive than normal. I was hesitant to move pieces into the middle of the board to begin with and with the possibility of losing a piece to a trapdoor I was even less likely to do so.

Between adding luck to the game and encouraging players to be even more passive, the trapdoors can lead to players getting stuck in a situation where they were basically biding time until they are ultimately eliminated. Maybe it was because I made good strategic moves (unlikely due to not really have a good Checkers strategy) but the player I played against in one game had no chance of winning at about the halfway point. I am not exactly sure how it happened but all of their pieces were trapped. This situation got so bad that they regularly had to choose between moving one of their pieces onto an open trapdoor or moving pieces to a space where they would immediately be captured without a return capture. This lead to the player bleeding checkers quickly with no way of salvaging things. At around the halfway point it was a forgone conclusion who was going to win the game.

In a lot of ways these mechanics make Trapdoor Checkers more of a game of survival than an offensive game. Most of the time you are probably better off playing as passively as possible. It is usually better to just try and keep your pieces safe by avoiding the trapdoors than being aggressive and trying to capture the other player’s pieces. This leads to the game becoming even more passive than traditional Checkers. The stalemate issues of Checkers are still present and are even more likely in Trapdoor Checkers as players will try to avoid the trapdoor spaces.

While I didn’t really like Trapdoor Checkers’ gameplay, I thought the component quality was a little better than I expected. The checkers are pretty generic. While the board isn’t much to look at I thought it worked better than I would have expected. The knobs do a good job raising and lowering the trapdoors. When pulling the levers though you need to be careful as it is not that hard to pull them two positions instead of one. The spinners are not bad even though they tend to get stuck from time to time. The gameboard thankfully only has a couple of screws to unscrew allowing you to fix whatever issues you have with the spinners. The components don’t make up for all of the other issues with Trapdoor Checkers, but they are better than I was expecting.

Should You Buy Trapdoor Checkers?

While I have never been a huge fan of Checkers I was cautiously optimistic about Trapdoor Checkers. The idea of adding trapdoors to Checkers sounded interesting as I thought it would add a little variety to the original game. Unfortunately it mostly just adds luck to the game. You begin each turn spinning to determine what move you can make each turn. If you have a move lined up for your turn you better hope that you spin the right symbol or you won’t be able to make it. This ends up adding a lot of luck to a game that otherwise has very little luck. The trapdoors also seem to encourage players to play more passively as almost all of the spaces in the middle of the board are trapdoor spaces which you don’t want to move to unless you have to. All of this leads to players sometimes getting put into a bad position where they have no chance of winning. Ultimately Trapdoor Checkers is worse than normal Checkers.