Top Spin was a handheld puzzle released in 1989 by the Binary Arts Corporation (now known as ThinkFun). Top Spin is a plastic oval shaped puzzle featuring numbered discs from one to twenty. The object of the puzzle is to get all twenty numbers in numerical order. This is easier said than done though as all the puzzle gives you is a wheel which you can use to change the order of the numbers. By sliding the numbers back and forth and using the wheel you can change the order of the numbers to get the numbers in numerical order.

My Thoughts on the Top Spin Puzzle

When I first looked at Top Spin I didn’t really have much of an opinion on it. It looked like every other puzzle game. After playing with it for a while I have to say that I was surprised by it. While they are quite a bit different, Top Spin actually reminded me quite a bit of a Rubik’s Cube. Top Spin uses two dimensions instead of three but the idea of rearranging the numbers feels a lot like moving around the cubes in a Rubik’s Cube. Since it is two dimensions instead of three, Top Spin kind of feels like a simpler Rubik’s Cube.

My first thought when I started playing with Top Spin was how hard could it actually be to solve. There are only twenty numbers after all. In around five minutes I was able to get the first sixteen numbers in order. The basic strategy for Top Spin is actually pretty straightforward that most people should be able to figure it out pretty quickly.

While I wouldn’t call Top Spin a difficult puzzle, I actually had quite a bit of fun trying to solve it. For being almost 30 years old I have to say that I was quite impressed with how well it still works. It is quite easy to move the numbers around the puzzle and spinning the wheel works well. Spin Out works really well as a puzzle game that you can play around with for a couple minutes at a time when you have nothing else to do.

The one problem with Top Spin is that once you figure out how to approach the puzzle, there isn’t much too it. You can mess up the numbers as much as you want but if you develop a strategy you will always be able to solve Top Spin pretty quickly. Basically once you know how to solve Top Spin, the only thing you can really do is try to work on solving the puzzle quicker.

How to Solve The Top Spin Puzzle

If you approach Top Spin thinking that you can just randomly rearrange the numbers and reach the final solution you likely won’t get very far in solving the puzzle. You can make some progress just randomly moving the numbers around but you likely won’t be able to solve the puzzle. To solve the puzzle in a reasonable amount of time you need to create a methodical strategy to follow. While there could be more efficient strategies that could save you time, here is the strategy I used to solve Top Spin. If you don’t want the puzzle solved for you, I would suggest skipping to the next section.

Before you can solve Top Spin you need to be familiar with how the puzzle works. Each time you turn the wheel you will move one piece forward three spaces, one piece forward one space, one piece backward one space and one piece backward three spaces. The two numbers on the outside of the wheel and the two numbers on the inside of the wheel will switch places. To make my strategy easier to follow, I am going to label the different positions inside the wheel so they will be easier to reference later on. The space closest to the area where you are moving numbers towards is position one. The next space is position two and so on. 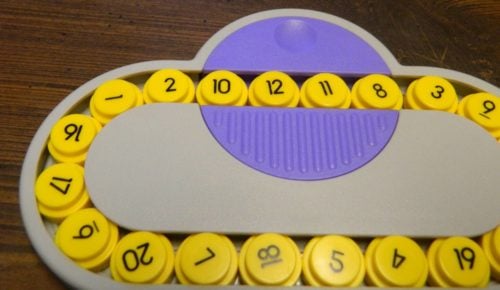 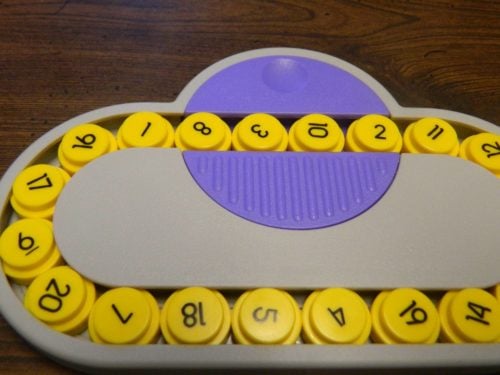 When the wheel is turned the two will be next to the one.

You should now have the first sixteen numbers in order. Now comes the hardest part of the puzzle. Unless you are lucky numbers seventeen through twenty likely won’t be in order or you have already solved the puzzle. At this point if you use the previous strategy you will begin messing up the numbers you already have in order. For these last four numbers you will have to use one of two different sequences of moves. These sets of moves allow you to move a number through the other numbers without messing up their order. For the following two sequences of moves you have to move the next number to these positions and then turn the wheel. The two sequences of moves are as follows: 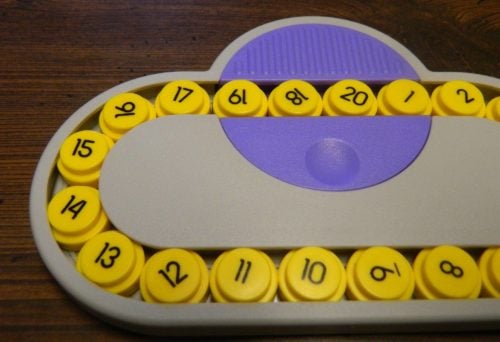 You will have to repeat the process until the number has moved through all of the numbers and has made it to its destination. If one of the sequences of moves doesn’t get the number into the correct position, the other set of moves should work. These two sets of moves should get the last four numbers into position and then you have completed the puzzle. 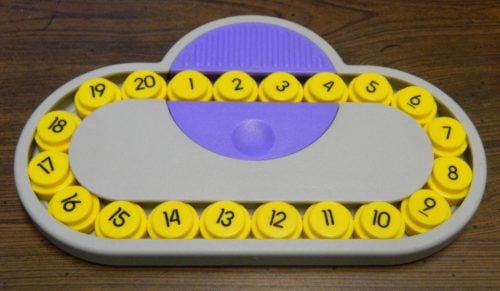 Should You Buy the Top Spin Puzzle

Top Spin is an interesting little puzzle. In a lot of ways it feels like a Rubik’s Cube but simpler. The puzzle actually works surprisingly well for a puzzle that is almost 30 years old. At first the puzzle seems surprisingly easy but you will likely hit a snag towards the end. Once you can figure out a strategy to approach Top Spin though it becomes pretty easy to solve. Top Spin is enjoyable while you are trying to solve it but somewhat loses its’ appeal after you figure out how to solve it.

If you like puzzles like Rubik’s Cube I think you will enjoy Top Spin. It is simpler than a Rubik’s Cube though so if you want more of a challenge it might not be for you. If you are looking for an easier puzzle game you will probably enjoy Top Spin though so I would recommend picking it up.

If you would like to purchase Top Spin you can find it online: Amazon