In the last couple of years I have looked at quite a few stacking games here on Geeky Hobbies. While I don’t mind the stacking genre, the biggest problem with the genre is the fact that so few games actually do anything original. Basically in every game you roll or spin to determine where in the tower you have to add something. Players take turns adding things to the tower until someone knocks it down. The player who ends up knocking over the tower is eliminated or has to take all of the pieces that they knocked down. That is basically all there is to a lot of these type of games which makes most of the games feel like more or less the exact same game. Unfortunately this also is a fitting description for today’s game Tipsy Tower.

How to Play Tipsy Tower

Various versions of Tipsy Tower have slightly different rules which I will try to point out.

Assemble the tower by placing each section of the tower on top of each other (the order of the colors don’t matter) and placing the cap on the top. In some versions of the game the pieces are evenly divided between all of the players. In other versions all of the pieces are placed next to the tower and no player controls them. The youngest player gets to go first.

On a player’s turn they roll the die/spin the spinner. The color rolled/spun determines which ring that the player has to add a playing piece to. If the player rolls/spins “any ring” the player gets to choose which ring to place a piece on. The player adds the piece carefully to the ring as to not knock over the tower. After placing the piece play moves to the next player. If while a player places a piece they accidentally knock off one of the other pieces, they must roll/spin and add that piece back to the tower. 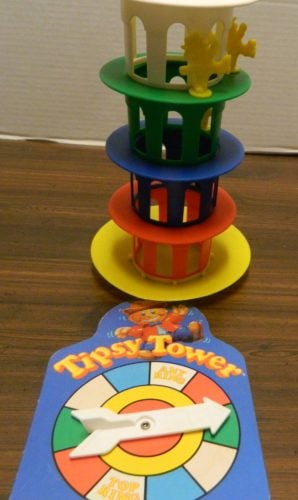 The current player has spun green so they added a piece to the green section of the tower. 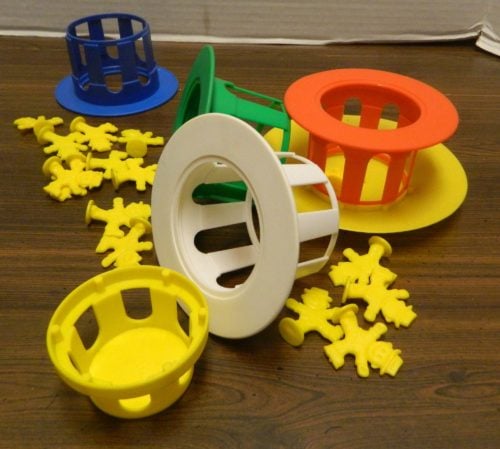 The tower has collapsed. Based on what version of the rules that you choose to use, the player who knocked over the tower is either eliminated from the game or they are forced to add all of the pieces they knocked off to their group of pieces.

If all of the pieces are added to the tower, players roll/spin and remove a figure from the corresponding ring of the tower.

My Thoughts on Tipsy Tower

So I will admit that there really isn’t a lot to say about Tipsy Tower. We have looked at quite a few stacking games in the past on Geeky Hobbies and after a while the games truly start to blend together as very few of these games do anything highly original. Basically Tipsy Tower is like every other stacking game. Players take turns adding pieces to the tower trying not to knock over the tower. Having played so many different stacking games, I honestly can’t think of a single mechanic in Tipsy Tower that I haven’t seen in another stacking game.

Just by looking at the box it should be pretty obvious that Tipsy Tower is a children’s game. With some versions having a recommended age of 3+ Tipsy Tower is a game that is mostly meant for children. The game’s rules are really simple as you just roll/spin and then add a piece to the tower. That is all there is to the game. The only real strategy is to even out the weight when placing pieces to prevent the tower from tipping too far in one direction. With there being so little to the game I really can’t recommend the game to adults unless they are playing the game with young children. The game just has too little to it which makes the game boring for adults.

I think the biggest problem with the game is that it is really hard to knock down the tower. While different versions of the game might differ slightly, the Lakeside Toys version of the game is just too stable. Maybe it is because the pieces are too light or the tower just doesn’t tilt that much. I honestly think we could have played the game for a half hour and it wouldn’t have tipped over once. As long as you aren’t careless when placing pieces and do a decent job balancing out the weight, I don’t see the tower tipping over. We were able to add all of the pieces to the tower, take them all off, and then add them back again and the tower didn’t tip over once. If we wouldn’t have decided to end the game early, we might still be playing the game right now. While a tower that is too unstable is also a problem, a tower that never falls down is very anticlimactic and leads to a dull game.

This is just another example of why I think Tipsy Tower is just for younger children and parents. Young children likely won’t balance out the tower as well as adults would and they likely won’t be as careful placing pieces. Adults playing the game with young children can also play the game more carelessly in order to give the young children a chance at winning the game. If the tower actually fell down with some regularity, the game would be quite a bit better. I still wouldn’t say that Tipsy Tower would be a good game but it would be significantly shorter and thus wouldn’t drag on for far too long.

If you read through the how to play section you might have noticed that there are two different ways that the game can be played. There are some variations on how Tipsy Tower is played because the rules have changed over time. The Lakeside Toys version of the game uses the rules where you are eliminated if you knock over the tower. Meanwhile the Milton Bradley version of the game has you pick up all of the pieces you knock off with the ultimate goal of trying to get rid of all of your pieces. Of the two sets of rules I think the Milton Bradley rules are better. I have never been a fan of player elimination rules which are present in the Lakeside Games version of the game. While a player that knocks off a lot of pieces likely will never catch up, it is still better than just sitting around waiting for the rest of the players to finish the game. Winning the game by getting rid of all of your pieces also creates a set length for the game. This prevents the game from never ending if the players don’t tip over the tower.

As far as the components are concerned the game is solid but not spectacular. For the two versions of the game that I found basically all of the components are made out of plastic. Of the two versions I would say the Milton Bradley version has better components. The Lakeside Toys version has decent components but every piece looks exactly the same and feel a little cheap. What I like about the Milton Bradley version is that the there are several different looking pieces and they have a lot more character than the pieces from the Lakeside Games version. Basically the components work well enough but are nothing special.

One interesting thing I learned after looking into Tipsy Tower is that there have been quite a few versions of Tipsy Tower made over the years. Most of the versions of the game slightly tweak the theme or the rules. I did find one interesting version of the game though. In 1994 Jumbo released the game Super Mario Tower. Super Mario Tower is a Mario Bros. themed version of the game. Instead of adding human pieces to the tower you add Yoshis and Toads while trying not to knock Bowser off the top of the tower. While I am guessing the gameplay is not really any better than the normal Tipsy Tower, being a Nintendo fan I think it would be pretty cool finding a copy of Super Mario Tower.

Should You Buy Tipsy Tower?

Basically Tipsy Tower is a very generic children’s stacking game. You roll/spin and place a piece on the corresponding space on the tower. Rinse and repeat until someone knocks over the tower. Having played so many of these type of stacking games, Tipsy Tower doesn’t do anything that I haven’t seen in many other games from this genre. While I can see Tipsy Tower working pretty well for younger children, it is pretty boring for adults. This is due to there not being much to the game along with the fact that if you are careful it is really hard to actually knock over the tower.

If you would like to purchase Tipsy Tower you can find it online: eBay