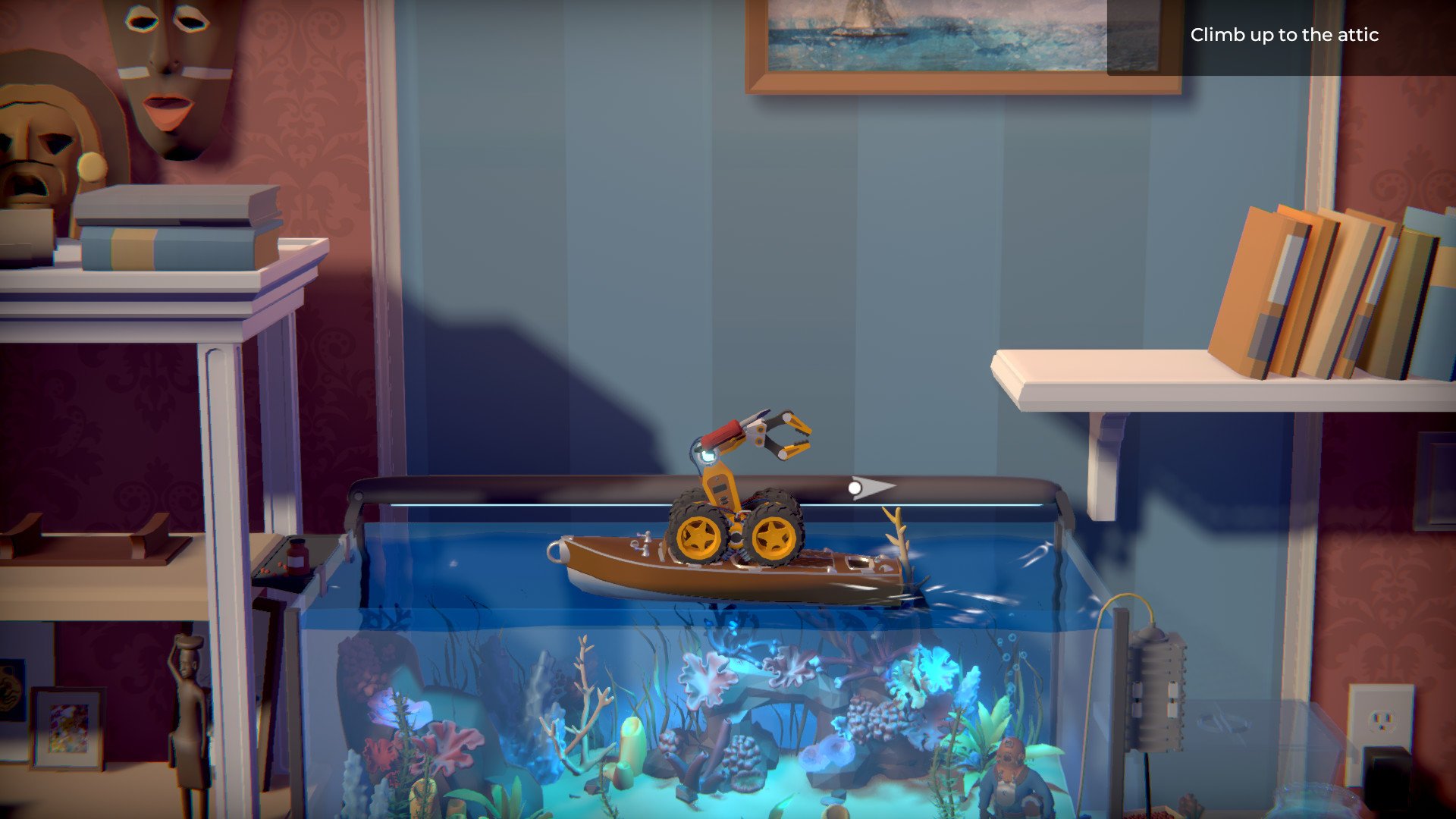 One of my favorite themes is time travel. I am not exactly sure why, but I have always enjoyed a good time travel movie/game. While there are quite a few video games that have utilized a time travel theme, it usually just impacts the story and has little to do with the gameplay. Basically the time travel is a gimmick. This is one of the things that intrigued me about Time Loader as the game is a puzzle platformer that is built around your decisions impacting the future. Being a huge fan of puzzle platfomers, I was really interested in checking out the game. Time Loader is a fun puzzle platformer with some interesting time travel elements that fans of the genre or premise should enjoy.

In Time Loader you play as a little robot. You have been sent to the past by your creator to prevent an accident that left them paralyzed. As a small robot you must find a way to traverse the house and change the events that lead to your creator’s accident. You will discover that every action has consequences though as your actions in the past may have unintended effects on the future. Can you complete your mission and improve the future by changing the past?

If I were to describe the gameplay of Time Loader I would say that it feels like a combination of a platformer combined with a puzzle game. You play as a little robot with limited skills to begin the game. You have an arm that can interact with and pick up objects. You also have a short jump. You must use these two abilities together to create a path forward with the objects in your environment to complete your mission. As you advance in the game you will acquire additional abilities like a higher jump and other abilities which will give you more options to traverse the environment.

As a fan of puzzle platformers I enjoyed my time playing Time Loader. I would say that the gameplay is split pretty evenly between platforming and puzzle solving. Most of the gameplay comes down to you encountering an obstacle that blocks your path. To clear a path forward you need to solve a puzzle by interacting with objects in the environment. In a way a lot of the puzzles act like a Rube Goldberg Machine where you interact with one object which sets off a chain reaction clearing a path forward. While the puzzles are kind of straightforward, I think they were cleverly designed where it feels like you are playing as a small robot using everyday objects to create a path forward for yourself. If this premise interests you at all, you likely will enjoy the puzzle design of the game.

The platforming comes into play to either get you into position to solve part of a puzzle or proceed forward after completing a puzzle. The platforming is quite straightforward as the robot has a little hop where its wheels rotate in the air. Your initial jump is quite short but it get higher later in the game. You can use your claw to grab onto objects which allows you to swing back and forth. I don’t know exactly what it is, but the jumping in quite satisfying. The game doesn’t really rely on precise platforming as the platforms are pretty large where you don’t need precise timing or positioning. The robot has treads which allows you to pull the rest of the robot up if only part of it makes it onto a platform. Time Loader does a pretty good job making it feel like you are playing as a small robot just trying to reach your objective.

I will preface this by saying that of all video game genres the puzzle platformer may be the one that I have played the most games from. With that said I wouldn’t consider Time Loader to be a particularly difficult game. While the puzzles are well designed and pretty clever, they are for the most part quite straightforward. If you just investigate the surrounding area and consider your available tools, the solution for an obstacle that stands in your path is usually pretty obvious. You then just need to complete some straightforward platforming sections. The platforming is never particularly difficult, and should you ever fail a jump you only loose a little progress as you work your way back to the area where you failed. The easier difficulty doesn’t make Time Loader a bad game. I mostly wanted to bring it up so people that play a lot of games from this genre know that it won’t really test your gaming skills.

With the gameplay out of the way, I wanted to move onto the time travel element of the game. I am a huge sucker for anything time travel related so this was honestly the element of the game that I was most intrigued by. A game where you are sent to the past to change events to impact the future intrigued me. I am generally skeptical of games that utilize this type of mechanic as more often than not they are more of a gimmick than anything else. While not perfect I think the game does a good job utilizing the mechanic.

I wouldn’t say that the game is totally open ended. Much of the main path through the game is scripted where you have no impact over what happens. While you are completing the main objectives though, there are a number of things that you can do which will have an impact on the future. These mostly come from optional tasks and you could miss them entirely if you only focus on the main objectives. Most of these events involve either choosing to or avoiding interacting with an object. If you interact with an object it may impact the environment later in the game as well as the future outcome of your creator. While your impact on the future is limited in some ways, I do appreciate the game actually creating sort of a branching storyline where it feels like your decisions matter.

Because of the branching storyline the game actually has a number of different endings. It appears that the game has three different endings with most players likely getting the ending which I believe is due to not correctly dealing with all of these optional tasks. This leads to an ending that I personally found a little unsatisfying. I am not going to get into why I felt this, but the game really encourages you to deal with all of these optional objectives in order to get a better ending.

For this reason I would recommend that all new players really consider diverting from the main path as much as possible. Just heading in the direction that the game directs you will make you miss most of these optional tasks. When you find these optional tasks it is usually pretty obvious what you should do, but there are also a couple where the game kind of misleads you into doing something when it is better to do nothing. I actively tried to find every secret in the game and yet failed to because I missed a few things throughout the game. After you beat the game it does allow you to skip to different sections of the game in order to find and fix the things you didn’t in your first playthrough. Some of these optional things are still pretty hard to find though.

At this point I want to quickly address the game’s length. The length you get out of the game kind of depends on how you approach it. Unless you find all of the optional things in your first playthrough (unlikely), you will likely beat the game pretty quickly. I approached the game with the idea of trying to find every secret that I could while still following the general direction that the game was pointing me in. I ended up finding a decent amount of the optional things, but not all of them. It ended up taking me around 3-3.5 hours to complete the first playthrough of the game. If you just follow the main objectives it will take even less time. If you try to find all of the optional things though it will add time to the game. I still wouldn’t consider the game to be super long, but if you 100% the game it does add a decent amount to the game’s length.

As for Time Loader’s theme and atmosphere I think the game does a pretty good job. I generally thought the game’s story was interesting. It is pretty straightforward for the most part, but fans of the time travel premise will likely enjoy it. As I mentioned earlier though the ending most players will get is kind of underwhelming. As for the game’s setting it relies heavily on 1980s and 1990s nostalgia. Scattered throughout the house is a bunch of items that transport you right back to that era. The game’s visuals are also pretty good for an indie game. While the gameplay takes place on a 2D plane, the game utilizes a 3D graphical style that looks quite nice.

I was initially intrigued by Time Loader due to the time travel premise and the game pretty much lived up to my expectations. The gameplay combines platforming and puzzle elements as you need to interact with objects in order to make a path forward for you to complete your objective. Both of these elements are on the easier side, but are still fun. The puzzle design is clever if not a little straightforward. The platforming is not super challenging, but is still pretty fun. While the main path through the game is scripted, the game does have a number of ways that your choices impact the future which have interesting side effects. This impacts the ending you ultimately get. If you don’t make all of the right choices with these optional decisions the ending is kind of disappointing which encourages you to try and find all of the right ways of impacting the future. I would recommend seeking these out as the game is otherwise on the short side as well.

My recommendation for Time Loader comes down to your thoughts on puzzle platformers and the time travel premise. If you don’t really care for either, I don’t think the game will be for you. Those intrigued by at least one of the two though will likely enjoy Time Loader and should consider picking it up.