How to Play Ticket to Ride Europe

A comparison of short and long routes.

To begin the game each player is given one long route and three normal routes. Each player needs to keep at least two of the cards but can keep three or all four of the cards. 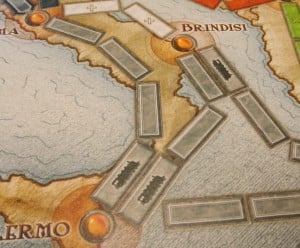 In the ferry routes shown, at least one locomotive/wild card needs to be played to complete the route.

Ferries: If you would like to claim a ferry connection you must play at least as many locomotives (wild cards) as there are train symbols on the connection you are trying to claim. 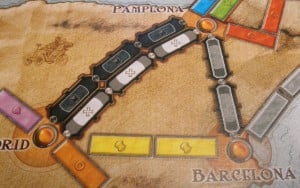 In order to claim the white or black tunnel connection, a player will need to play 3 white/black train cards plus an additional white/black card for each corresponding color drawn from the deck.

Tunnels: If you would like to claim a tunnel (indicated by a black outline around the train symbols on the board) you first need to play as many train cards as there are trains in the connection (following all other Ticket to Ride rules with regards to color and wilds). You then draw the top three face down cards from the deck of train cards. If any of the cards drawn are a wild or the same color as the cards played by the player, the player needs to play an additional card of that color/wild for each card that matches. If the player either doesn’t have enough cards or they don’t want to play that many cards, they can take their cards back and end their turn (they do not claim the route). 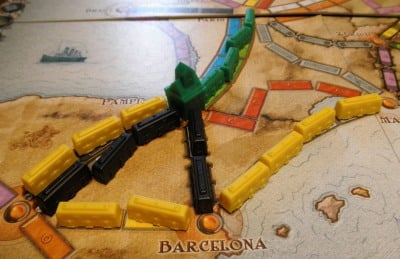 In order for the green player to be able to reach Barcelona, they need to place a train station in Pamplona which will allow them to use the black player’s route from Paris to Barcelona.

My Thoughts on Ticket to Ride Europe

As I have already mentioned, Ticket to Ride Europe is similar to the original. A lot of people might even call it an expansion pack. Europe can be played all by itself though without needing the original game. While the games are similar with regards to the rules, they have a surprisingly different feel to them.

The main difference between the two games in my opinion is that the Europe map is a more competitive/cutthroat than the United States map in the original map. In the original it was pretty easy to find a workaround if someone stole the connection that you needed. It is not so easy in Europe though. I didn’t count to verify this but I think Europe has quite a few more smaller connections (two and three train connections) and there are quite a few key connections that need to be acquired in order to reach certain areas of the map. There is a lot more competition for connections in Europe than there was in the original. This is not a bad thing and actually makes for an experience that is significantly different than you would expect from just a different map.

I think that separating the routes into the long and regular routes is an unfortunate but necessary addition to the game. I always loved getting multiple long routes in the original Ticket to Ride since if you were able to complete the routes you were essentially guaranteed to win the game. I loved getting two routes that when combined created a route that went from California to the east coast since you got points for two long routes and you would always be in the running for longest route. If this happened you almost always won the game in a blowout. Limiting each player to only a maximum of one long route balances out the game though. It wasn’t really fair to the other players when a situation like this came up. Removing the ability to get two long routes also forces you to take more shorter routes which adds to the competitiveness when multiple people need the same connection.

Ferries overall are a decent addition. Ferries main purpose in my opinion is to make locomotives/wilds more valuable. In most games wilds are generally the strongest card in the game since they can take the place of every other card. In the original Ticket to Ride, wilds were a lot weaker than you would expect . In games I have played, wilds were rarely taken while face up since getting one less card was a pretty heavy cost for taking a wild. Unless I absolutely needed one type of color and I wasn’t getting it any other way, I never took face up wild cards. The cost of taking a face up wild is still present in Europe but since you need wilds in Europe there is a stronger incentive to taking face up wilds.

Tunnels add a luck/risk element to Ticket to Ride. Every time you try to take a tunnel, you risk wasting your turn since you might either not have enough cards or don’t want to pay that many cards to claim a connection. If you fail to claim the tunnel you don’t lose your cards but you do lose a turn. In my opinion every turn is important since at the very least you could have used the turn to get two additional cards. In the game I played, on average people ended up having to play one additional train card to claim a tunnel connection. This actually ended up altering the game some since in a couple situations I had enough cards to claim a connection but waited to get an extra card of the color to make sure that I would be able to claim it.

While Ticket to Ride Europe is a terrific game, I do have two small complaints about the game.

First I would not recommend playing with two or three players. I have played Ticket to Ride with three and four players before and four players is much better in my opinion (five might be even better). With three players there are less people competing for connections but the double connections are eliminated. The double connections add quite a bit to the game in my opinion since they give players a little flexibility in their route planning. Without the double routes in one move your entire strategy could be ruined. Playing with only three players is still a fun game and I would still highly recommend it but I would recommend trying to find at least four players.

The second problem I have with the Europe version is that it is sometimes hard to find the cities you are looking for on the map. I think the route cards themselves could have done a better job illustrating where the cities were located. For example on one of my cards the city looked like it was on the eastern border towards the center of the board. The city was actually towards the bottom of the map. Therefore there were a couple times where it took a couple minutes to find the cities that I was looking for since I was looking at the wrong section of the map.

Recommendation: For everyone who is fans of the original Ticket to Ride or is looking for a surprising easy to play game that also has quite a bit of strategy.

[…] to Ride is probably my favorite board game and all of Alan Moon’s games that I have played (Ticket to Ride Europe, 10 Days in the USA, 10 Days in Africa, Incan Gold, Walk the Dogs) were at least above average. […]

[…] Ride is probably one of our top five games (and the gateway game that got us into designer games), Ticket to Ride Europe got a 5/5, and even lesser known games like Incan Gold, 10 Days in the USA, and 10 Days in Africa got solid […]