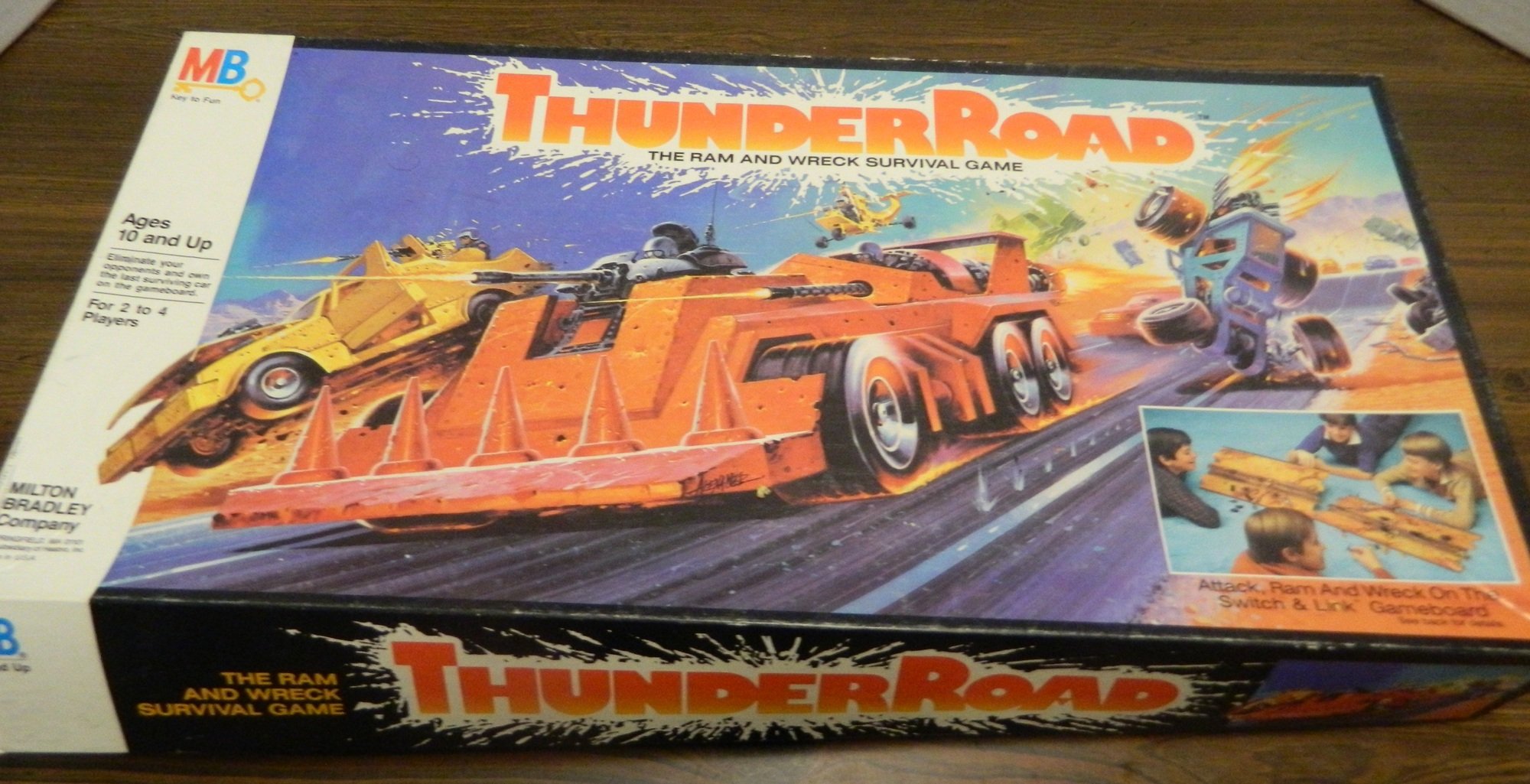 Set up the board by placing the two sections of gameboard next to each other (the section with the game logo on it goes on the right). Place the black wreck cars on the spaces with red x’s. Each player takes all of the cars and the helicopter of a given color. The cars are placed on the corresponding start spaces on the gameboard. The helicopters are placed in front of the player who controls it. Determine who will start the game.

To begin the player’s turn they roll all three yellow dice. Each dice will be used to move one of your cards. The player gets to choose which die they will use to move each of their cars (only one die may be used for each car). If the player has one or more wrecked cars they still roll all three dice and choose which dice to use for cars that aren’t wrecked.

When moving cars a couple rules must be followed:

If a wrecked car (a black wreck or a wrecked car of one of the other players) is in your way you can choose to crash through it. You roll one of the red dice and the outcome is determined by which number is rolled.

In addition to moving their cars, players are able to attack other players.

The first thing players can do is ram other player’s cars if they land on the same space as an opponent’s car (as long as there is not another car on the space). The owner of both cars roll one of the red dice. Each player adds the number they rolled to the value of their car that is involved in the ram (the smallest car is worth 4, the medium is 5, and the largest is 6). Whichever player rolled a higher total wins. If there is a tie the defending car (the car that was attacked) breaks the tie.

If a player lands on a space behind another car, they can try to shoot it. If there are multiple cars that can be shot, the attacking player chooses which car they are going to attack since they can only attack one car. The attacking player rolls a red die and compares the number rolled to the value of the car that is being attacked.

The player then rolls a red die and compares it to the car’s value.

If a player rolls two sixes during their turn, they can repair one of their wrecked cars. After repairing a car, the player moves all of their non-wrecked cars like they would on a normal turn.

When a car reaches the end of the lead track and still has movement points remaining, the gameboard is switched.

The back board is cleared of all cars. The cars that are cleared are removed for the rest of the game. All helicopters on the back board are returned to their corresponding players. All black car wrecks are kept on the board.

The rear board is then put in front of the prior lead board and becomes the new lead board. The player then continues moving the car that reached the end of the track as many spaces as they had left to move.

If a player loses all of their cars, they are eliminated from the game.

The last player with any car(s) running (not wrecked or removed from the board) on the gameboard wins the game.

Although having absolutely nothing to do with the movie, the 1986 board game Thunder Road has long been considered the unofficial “Mad Max” board game. I have watched and enjoyed the Mad Max movies but I wouldn’t say that I am a huge fan of the franchise. I was intrigued by what a board game based on Mad Max would play like though. I never had Thunder Road as a child and since the game is semi-rare (around $50-$100 online) I never planned on playing the game. After finding a copy for $1 (which was missing quite a few pieces) I was able to try the game out. While the game is quite innovative for a roll and move game from the 1980s, the reliance on luck keeps Thunder Road from being a truly great game.

The whole idea behind Thunder Road is a interesting concept for a board game. It plays like most racing games where you try to beat the other players. Thunder Road adds a couple unique elements that makes it stand out from other racing games though.

The first thing that Thunder Road adds is the element of combat which makes things a little more interesting. As a whole the combat is a good idea but is not particularly advanced. Basically you just land behind or on the same space as other cars and roll the dice. There is very little strategy to the combat since whoever rolls better wins the battle. The combat is solid but there are two problems I have with it.

I think giving a punishment for a failed attack is important because if you are successful with an attack you gain a big advantage over that player. Following the game’s basic rules it is too hard to repair  your cars in Thunder Road. If your car ends up getting wrecked, you will likely lose it unless you roll really well. Rolling a pair of sixes quickly is quite hard. Usually wrecking your car means it will fall far way behind which makes it very hard to catch up even if you are able to repair the car in time. I understand why the game made it hard to repair cars since the game would last forever otherwise but they could have made it a little easier to overcome. Board Game Geek has a really good rule to fix this problem which is to allow a player to use any pair rolled that is equal to or higher than the rank of the car that you want to repair. I think this balances the game since it will still be difficult to repair cars and catch up but not so hard that it is very hard to ever recover from a wreck.

Another interesting mechanic in Thunder Road is the idea of the road die. It is nice being able to utilize the road die but I am not sure it is always the best option. You get to move faster using the road but you are also going to end up dealing with more cars since other players will want to utilize the road. This means cars on the road have to deal with more obstacles and are also more prone to be attacked by other player’s cars. At least early in the game you may be better off driving through the desert since you will move slower but there is more open space so you don’t have to worry as much about being attacked by other players. Most of the strategy in the game comes from deciding whether or not to utilize the road which is why I think it is one of the best mechanics in the game.

The final unique mechanic in Thunder Road is the idea of the shifting gameboard. When I first read about this mechanic I thought it was a really clever idea. It actually makes Thunder Road a never ending gameboard since when you reach the end you just add a piece to the end and the road continues. This mechanic actually drives the entire game. It gives players two different ways to win the game. You can stay back hoping to wreck all of the cars or you can try to move as quick as possible hoping to move so fast that other player’s cars are left in the dust. I think this is a creative mechanic for a roll and move game and I am actually surprised that it has never/rarely been used by other roll and move games.

Another thing about Thunder Road that stands out are the components. While the gameboard is just made of cardboard, the artwork does a good job emphasizing the theme and the idea of the changing board is such a clever idea. The board is well designed which makes it a lot easier to shift the boards than you would think. The cars look pretty nice for a Milton Bradley game. Like my copy though I bet most used copies of Thunder Road are missing some or most of the cars as kids played with the cars and forgot to return them to the game.

I had fun with Thunder Road and it is better than a lot of roll and move games. It has some original ideas that make it play a lot differently than most roll and move games. Unfortunately the one thing it shares with most roll and move games is the reliance on luck. While the game has added several new mechanics to the mix, the game will ultimately come down to luck. Whoever rolls the best will win the game and strategy can only do so much to mitigate that. The player who rolls the highest numbers at the right times will win the game. High rolls let you move faster or wreck other cars which will help you eliminate those cars from the game. Due to this high reliance on luck I don’t think the basic game is worthy of the praise that it receives.

Thunder Road is a unique game in that it has developed a significant cult following due to its’ similarities to Mad Max. A lot of people have adopted Thunder Road as their Mad Max game which means that the game has had a lot of house rules/mods made for it. I haven’t played any of these yet but just briefly looking at some of them, you can tell that their creators spent a lot of time on them. People have made unique maps, custom cars, and have even created advanced rules for the game. These advanced rules made by David O Miller look particularly good which include additional cards, weapons, better repair rules, and more. I think these rules will add a lot of strategy to the game and thus will make Thunder Road a much better game.

Thunder Road is an interesting game. The game actually had quite a few new unique ideas for its’ time. Most of these mechanics work pretty well. I like the shifting board since it drives the gameplay making players decide between targeting other player’s vehicles or trying to move fast enough to eliminate cars from the back board. I like the idea behind the risk reward of driving along the road. I even like the idea behind the combat even though I wish there was a little more strategy to it and there was a punishment for a failed attack. While Thunder Road is a good roll and move game, the high reliance on luck prevents the game from being great. Whichever player is luckiest with their dice rolls will win the game.

Thunder Road is fun and probably even better if you use some of the house rules on Board Game Geek. Thunder Road is kind of rare though and thus is somewhat expensive if you want to purchase it online. The game generally sells for $50-$100 online and I personally don’t think the game is worth that much unless you loved the game as a child or plan on implementing a bunch of house rules. If you find a good deal though, love the theme, and don’t mind roll and move games I think you will really enjoy Thunder Road. If you would like to purchase Thunder Road you can purchase it on Amazon here