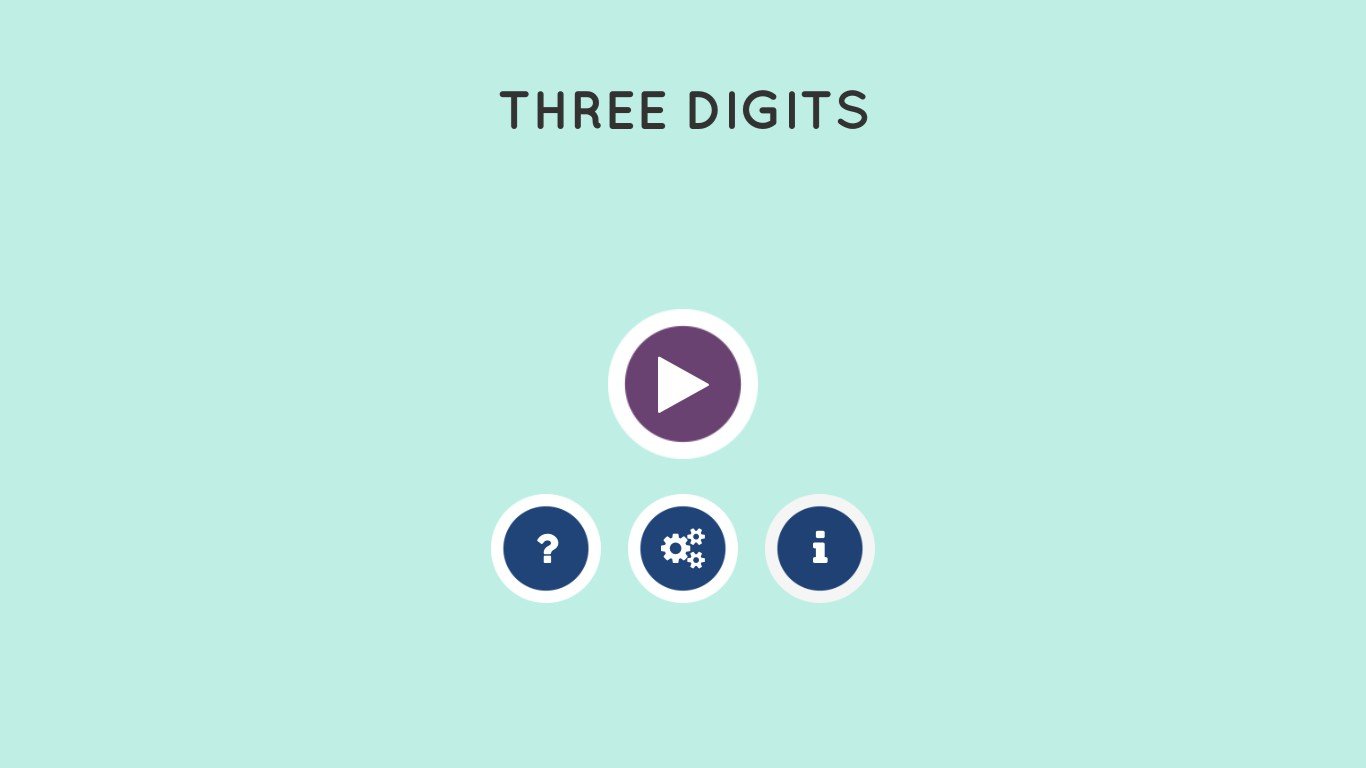 What Is Three Digits?

Three Digits is a 2015 casual indie game sequel to Two Digits (which came out a couple months ago). The concept is very simple, in each of the 300 puzzles in the game you are given fourteen different numbers (ranging from 1 to 999) and you have to choose two subsets of them that have the exact same sum. There are a few cases where you can add two numbers together and it will equal a different number listed (so you only need three numbers to get the two subsets to match). However, in most cases you will need to add (at least) two or three numbers together for each subset in order to get the totals to match. For example, this is the first level of the game.

Good for People Who Like Math Challenges, Not Recommended for Math-Haters:

Not surprisingly, this game requires a lot of math skills to be good at it. If you can’t (or don’t like to) add up numbers in your head, Three Digits is going to be very hard for you. Also, there are a lot of times where not only will you have to add numbers in your head but you will also have to remember another set you added together and compare those two together (so you also need a decent memory as well). Recognizing number patterns is also a valuable skill in this game. You don’t have to have “A Beautiful Mind” or be a math genius, but it definitely helps.

Luckily, math has always been my best (and favorite) school subject. I had no problem with algebra or any other type of math as I was going through school and I am really good at doing math in my head. However, even I struggled with Three Digits at times, mainly because there are so many different combinations you can use the 14 different numbers in. I don’t want to do the math to figure out just how many possible combinations there are, but believe me when I say there are at least thousands. I’m embarrassed to admit that one of the first twenty puzzles took me 15-20 minutes before I finally stumbled upon the answer. It probably shouldn’t have been that hard but there are just so many combinations to look through and it is sometimes very easy to miss the obvious answer staring right at you.

In terms of difficulty, people who don’t like math are going to find Three Digits very difficult if not impossible. This will likely be the equivalent of a casual gamer trying to beat “Dark Souls.” If you can add and compare numbers in your head, you at least have a fighting chance. The difficulty varies from level to level (I found that the levels with at least a couple two digit or low three digit numbers were easier than the ones without any low numbers) though. It’s very likely that math fans will have no problem with five straight puzzles (they’ll solve them in a minute or less), then run into a difficult one that takes them ten minutes to solve. Also, while I haven’t gotten to them yet some of the later puzzle sets sound kind of intimidating. There are sets of “awkward numbers,” sets completely made up of odd numbers, and even some that are all multiples of three. These will probably add an even bigger challenge to the game. Overall, I would say Three Digits is extremely hard (“Dark Souls” hard) for people who aren’t good at math and the game varies from pretty challenging to very challenging for math fans.

I never played Two Digits but I imagine it was much easier than Three Digits (and probably more fun). Two digit numbers are a lot easier to add together and it’s just plain easier to get them to match. Once you move up to three digit numbers, it becomes a lot tougher.

Great Bang for Your Buck:

If you want to complete all of the puzzles, Three Digits is a very lengthy game with great bang for your buck. The game comes with 300 puzzles, which can each take up to ten minutes (or more) to complete. I personally have only gotten to level 35 in three to four hours of play so far (though I often played when I was tired and my brain wasn’t really thinking the best). If you average five minutes per puzzle (some people might be able to do better than that but I’m guessing that’s actually a better than average time), that is 25 hours of content. Add in random mode (which generates random levels using any number range from 1-999 that you want) and you could get a ton of playtime out of Three Digits. The game is also very cheap, just $3.99. If you like the game’s concept, this could be one of the best bargains on Steam from a hours played to price standpoint.

While I think Two Digits is better as an educational tool (Three Digits is a little too difficult to practice math skills on), this game will definitely test a student’s math skills. This is a good tool to help you learn how to add large numbers in your head without the use of a calculator.

So Three Digits Is Hard, But Is It Fun?:

As I said, I love math and wouldn’t have been interested in trying out the game if I wasn’t. Unfortunately, I was slightly disappointed by Three Digits. It isn’t a bad game (and I can definitely see myself playing the game for thirty minutes or so every so often) but it just isn’t a ton of fun, mainly because of the high difficulty. I really thought it would be a fun challenge to make two sets of numbers equal each other but the game was much harder and more frustrating than I thought it would be. I think I would have liked Two Digits quite a bit more than this sequel.

Three Digits is obviously a game made for a niche market (math lovers). If you fit into that niche and you don’t mind a challenge, I’m guessing you will enjoy the game as long as you aren’t easily frustrated. If you played and enjoyed Two Digits, I see no reason why you won’t like the sequel as long as you don’t mind the added difficulty.

I thought I would love Three Digits because I enjoy math and am really good at it. While I don’t love the game, I also don’t hate it. It is a serviceable game that most math fans should at least get some enjoyment out of. However, I think I would recommend playing Two Digits first and seeing if you like that game. I just wish Three Digits was a little bit easier and I’m guessing Two Digits was. If you think the concept sounds interesting and you don’t mind difficult games, you almost certainly will get your money’s worth (you will probably get at least 20 hours of playtime for $4 or less). However, if you don’t like math or aren’t very good at it, you probably should pass. I am giving the game a 2.5 out of 5 because while it definitely isn’t for everybody, there is a small subset of gamers out there that will love it and get an amazing bang for their buck.