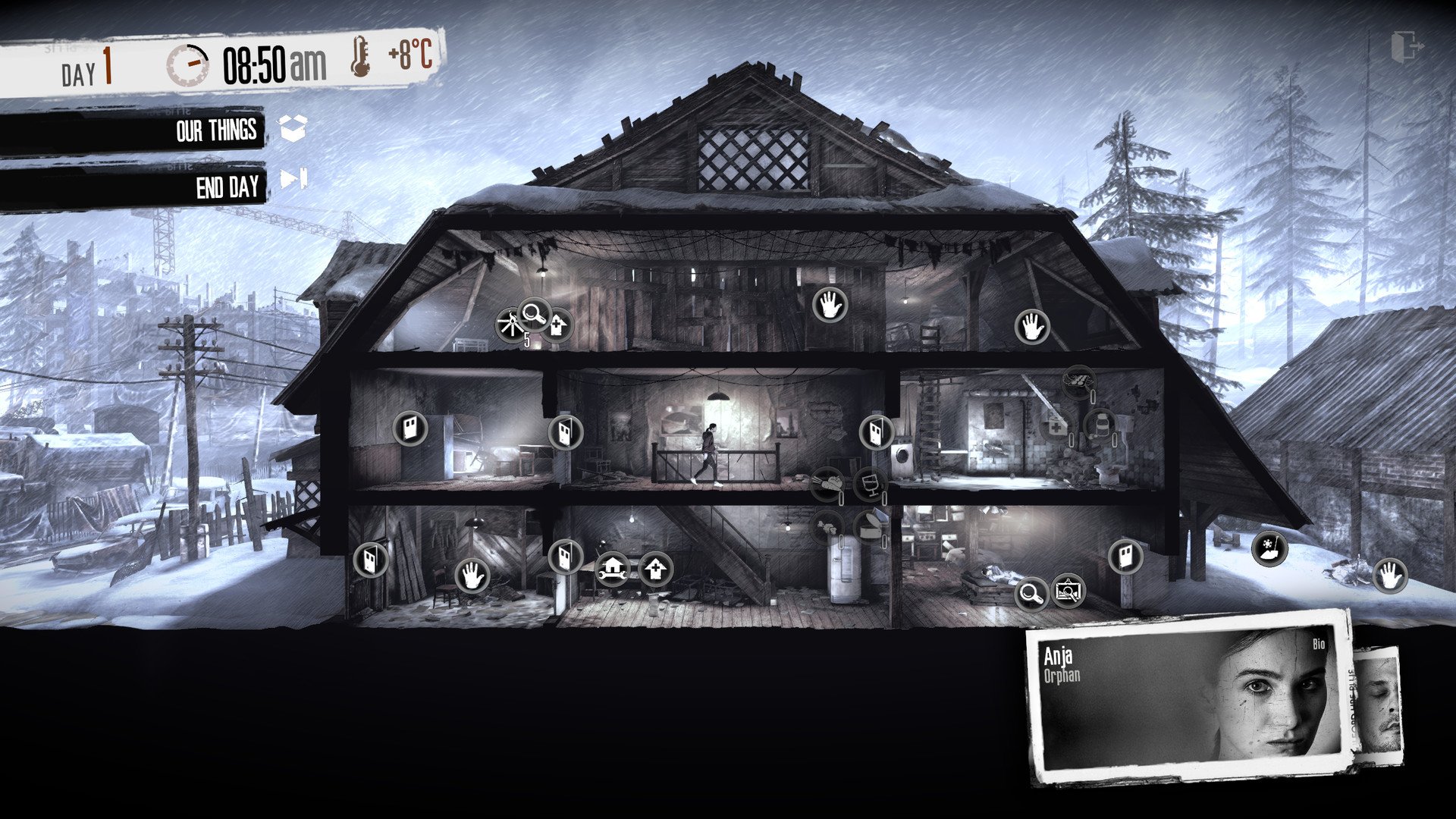 Originally released back in 2014 This War of Mine immediately became a hit winning quite a few awards. What was unique about This War of Mine was that it wasn’t your typical war video game. In most video games that focus on wars you either act as a soldier on the front lines or as a general ordering troops around. Rarely if ever do you get to play as the civilians that have to deal with the consequences of war. Well that is the premise behind This War of Mine as you play as a group of survivors that have to do whatever it takes to just survive. This War of Mine is one of those games that really intrigued me as it seemed to have a deep and thought provoking story along with interesting gameplay. I never ended up playing the game though. With the new release of the third DLC Fading Embers though I thought it was finally time to check out the game. This War of Mine and its DLC Fading Embers are a truly original experience showing the often forgotten costs of war.

With the release of the third DLC Fading Embers, this review will focus on both the original game as well as the new DLC.

This War of Mine

This War of Mine is not your typical war game. War has broken out in Pogoren. The city is regularly bombed and snipers are scattered throughout the city. In this harrowing situation you play as a group of survivors. These survivors must work together in order to survive in a war torn city. Food and medicine are scarce. Normal law and order is gone as it is has become survival of the fittest. To gather the resources needed to survive you need to scavenge the neighboring abandoned and partially destroyed buildings to pick up whatever you can carry to help you in your survival. You are not alone though as you will have to deal with other scavengers. Will your group of survivors last long enough to survive the conflict and if they do what will they lose along the way.

This War of Mine’s gameplay can basically be broken down into day and night cycles. During the day you can’t leave your house due to snipers posted around the city. Therefore you have to use your survivors to do things around your shelter. You have them craft items and meals, trade with other survivors, reinforce the shelter, and take care of one another. At night you can send out one of your survivors to scavenge nearby buildings in order to pick up items that you can use in your shelter. When scavenging you can only pick up enough goods that fit in your backpack. You may also encounter other scavengers that you have to either sneak around or kill before they kill you. You repeat this process each day as you try to improve your base while also just trying to survive.

If I were to explain the gameplay of This War of Mine I would say that it is kind of a combination of a survival game mixed with a crafting game. Basically the goal of the game is to use the nights to scavenge goods that you will then use to craft items for your base. To succeed in the game you need to figure out what goods you need and try to find them. Some goods are pretty abundant while others are pretty rare. Food and medicine in particular are hard to find. You need to focus on your survivors basic needs or they will die from hunger or disease. Next you need to focus on other needs like rest and entertainment to keep your survivor’s moods up.

At the beginning of the game you are just focused on surviving. You need to quickly shift your attention to sustainability though. You might find enough food to survive early in the game, but those resources will run out sooner rather than later. This means you have to build things in your base in order to grow or catch your own food as well as gather fresh water. You also need to create ways to generate goods that you can trade for resources that you need. This includes making cigarettes and alcohol that you can then trade for other goods that you need more. While you will be still scavenging you also need to form your own economy so you can survive long term.

As resources are scarce the game forces you to make tough decisions. At first you will be okay just scavenging abandoned buildings only encountering other scavengers that are harmless. As the war drags on though people including your own survivors will become more desperate. As you run out of resources you will have to make tough decisions or your survivors will die. Will you resort to stealing resources from other people that really need them? Are you willing to kill other people in order to get the resources that you need? Or are you willing to let one of your survivors die so the rest can survive?

This might sound really dark and depressing, which it is. This is one of the main reasons that I really liked This War of Mine though. This War of Mine is a truly unique experience that makes you really think. While a lot of war games have you focus on killing the enemy, This War of Mine focuses on the collateral damage. The game isn’t about killing other people and winning a war. It is about surviving and making the tough decisions that go along with trying to survive in a war zone. Every decision in the game has consequences and you will be forced to make decisions that you don’t really want to make. People who like games that are thought provoking should really enjoy This War of Mine. The game’s subject matter may be too dark for some players though.

In addition to the gameplay being thought provoking, I thought the gameplay was quite good as well. On the surface it might seem like your typical survival/crafting game. You gather items from scavenging which you then use to create items in your house. This gameplay is nothing that hasn’t been seen in other games from the genre, but it works quite well in This War of Mine. As resources are scarce you have to make tough decisions as you can’t make everything. It is satisfying turning your base from nothing to a pretty functional base all things considered. Fans of survival and crafting games should enjoy the gameplay quite a bit.

While I enjoyed This War of Mine quite a bit, it does have one problem. Unfortunately This War of Mine is one of those games that you have to kind of learn how to play. The game has a learning curve that can be kind of unforgiving at times. Unless you are really good at these type of games you may struggle to survive at first. Your survivors will likely die at some point or you will want to restart the game to try and get a better start. As you play the game you start to learn what types of things you need to focus on including which items that you have to build early on in the game. You begin to appreciate your early struggles as they lead to your later success. Failing and having to start over from the beginning is going to frustrate some players though.

In This War of Mine: Fading Embers you play as Anja. At a young age Anja became an orphan. When war comes to Pogoren Anja hides out at her families home which contains her families art/culture collection. Things are rough and get worse when a man stumbles to her door and collapses. Having to take care of herself along with the stranger is hard as resources are scarce. Fuel, food, and medicine are rare as it is the winter. Anja has to make tough decisions in order to survive. While her families artwork/culture are important to her, is it worth freezing over? Can you keep Anja and the stranger alive long enough to survive the conflict?

For the most part the gameplay in Fading Embers is pretty much the same as the base game. You need to scavenge items from buildings to craft and build up your base. The DLC has a different feel to it though. At the beginning you will have only one survivor to use while you will have to take care of the other survivor. Resources are also quite scarce. As Anja can’t carry a lot of items back to the base, you won’t have access to a lot of materials early in the game. In addition to a lack of food and medicine, there is a serious lack of fuel which is key as the DLC starts you in the winter.

Keeping your survivors warm is actually a pretty big mechanic in Fading Embers. It is hard to find wood in the DLC so you are always looking for fuel sources. This leads to one of the new mechanics in Fading Embers. As Anja’s family were artists and collected artwork from the region, they have a somewhat large collection of artwork. These artwork pieces are of cultural significance to the region though so you want to preserve them if possible. In addition while scavenging you will encounter other pieces that you can add to your collection. You will strive to keep these pieces of artwork safe, but things will get dire as you won’t have enough fuel. You then have to debate whether you want to sacrifice some of the artwork in order to keep your house warm enough that your survivors don’t freeze to death. It is hard to send pieces of artwork to the fireplace, but sometimes you can’t help it.

Unlike the main game Fading Embers is quite a bit more streamlined. In the original game you had a lot of different options in what you wanted to pursue. In Fading Embers the game basically gives you a blueprint that you pretty much have to follow. The game gives you a couple different areas to scavenge, but you can’t unlock new areas until you have performed certain actions in different locations. You still have some free will in regards to the order that you want to visit locations and what you scavenge from them. The DLC does have a more curated path though that you have to follow if you want a chance of succeeding.

I think players will have mixed feelings on this gameplay change. On the positive side it leads to a more in depth story which includes cutscenes. I found the story to be quite good despite being kind of dark/depressing. This more streamlined approach also makes it easier to know what you should do at any given time. On the negative side it does take away some of your decision making. There seems to be a right and wrong way to play the DLC as you have to perform certain actions in order to proceed. Players that liked the ability in the original game to play the game how they liked probably won’t like this change to the gameplay.