What was that robot’s name again? Was it Thinkotron? Maybe it was Clanky? Oh now I remember, its’ name was Bob. That might seem like a random opening but it leads into the premise behind today’s game Thing-A-Ma-Bots. In Thing-A-Ma-Bots players play cards to a center pile and when a new robot is played the current player gets to name it. You need to remember those names though because you will need them later in order to collect cards throughout the game. Thing-A-Ma-Bots has some interesting ideas which can lead to an enjoyable game but one mechanic almost ruins the entire game.

Shuffle the cards and deal them out evenly to each player face down. Stack your cards face down to form your play pile. The player whose first name starts with the letter closest to A gets to start the game.

A player begins their turn by playing the top card from their play pile to a pile in the middle of the table. Depending on what robot is pictured on the card one of three things will happen.

If no cards of that robot have been played yet in the current round, the current player gets to name the robot. The player can choose whatever name they want and all of the players have to refer to it by that name for the rest of the round. 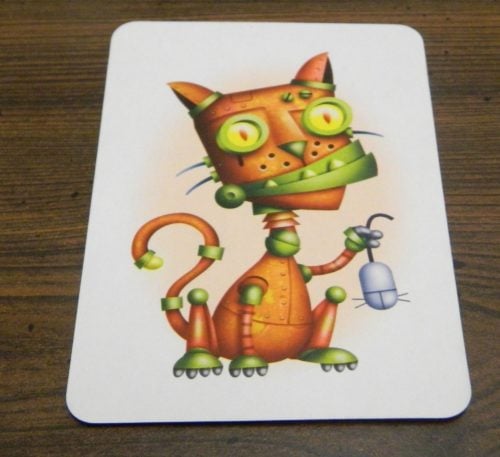 This is the first time that this robot has been played this round. The player who played this card decided to call the robot “Whiskers”. 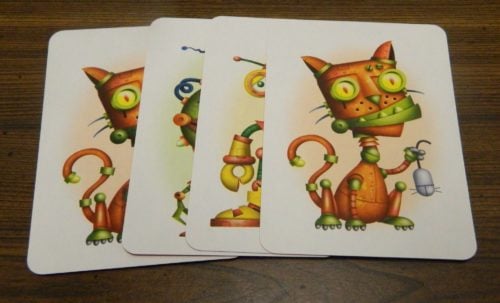 This is the second time that this robot has been played. The first player to yell out “Whiskers” gets to add all of these cards to their wins pile. 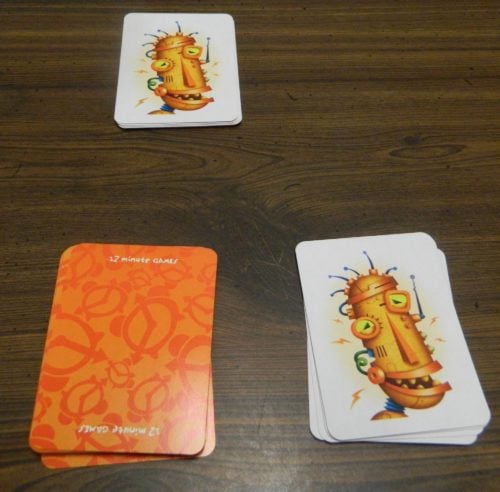 Once the middle pile has been taken by one of the players, all of the names given to the robots are reset and each robot is renamed when they show up again.

Some other additional rules:

The game ends when one player has played the last card from their play pile. Each player then counts the number of cards in their wins pile. The player with the most cards wins the game.

If I had to break down Thing-A-Ma-Bots I would probably classify it as a children’s speed memory game. Basically players take turns playing a card face up on the table. If the card doesn’t match a card already played to the pile, the player gives the card a name and play passes to the next player. If the card matches a card that has already been played to the table though, the players race to remember the name and shout it out in order to collect the cards.

At first glance this seems like a lot of other speed card games. The one unique twist in the game is the naming mechanic. I am guessing that there have been other games that have used a similar mechanic but off the top of my head I can’t think of one. I actually really like the idea behind the naming mechanic. While you kind of have to be in the right mood to get the most out of it, you can actually have quite a bit of fun with it. The mechanic is quite enjoyable when players come up with completely random or funny names.

While I can see adults enjoying the naming mechanic, I don’t really see the game working with serious gamers. While I can see groups of adults getting some enjoyment out of the game, I think the game is going to work best with families as children will probably really like it. The game is pretty straightforward so I don’t see children really having any trouble playing it. The game is also quite short at only around 10-15 minutes so it should keep children interested while longer games might not.

Thing-A-Ma-Bots has some interesting ideas and could have made for a good speed memory game. Then you get to the Thing-A-Ma-Bot rule. In my opinion this rule is terrible. The problem with this rule is that it ruins the rest of the game. Basically the Thing-A-Ma-Bot rule allows players to say a phrase slightly before another player and then they can steal all of the cards that player has spent all game earning. With this rule in place you could earn no cards throughout the entire game and then just steal all the other players’ cards at the end to win.

Playing the game with this rule in place requires all of the players to not care about who wins the game. This rule makes the outcome of the game pretty random. A player could do nothing the entire game and end up winning just because they beat the other players in one round. Now if none of the players really care about winning this isn’t going to be much of a problem. I am guessing most people care about winning though so this rule is going to drive them nuts.

Basically if you don’t want the outcome of the game to be random something needs to be done with the Thing-A-Ma-Bot rule. While I could see ditching the rule entirely, you might also be able to just reduce the penalty. Instead of giving the entire wins pile to the first player to say Thing-A-Ma-Bot you could give that player the top couple of cards. This will allow the rule to stay in play while not totally ruining another players’ game just because they were a little slow. With this rule tweak the fastest player should still win most games which is what should happen.

Other than the naming mechanic I think the best thing about Thing-A-Ma-Bots is the game’s artwork. Thing-A-Ma-Bots’ artwork is well done and is really cute. For example one of the robots is a cat. The cat has a mouse in its’ hand which happens to be a computer mouse. The other robots are also really creative in how they utilize gears and other pieces of machinery. The card quality is basically what you would expect out of a Gamewright card game but with how nice the artwork is you really can’t complain about Thing-A-Ma-Bots’ components.

Overall I would say that I was a little disappointed with Thing-A-Ma-Bots. I never thought the game was going to be great but it showed some potential. The game shares a lot of mechanics with other speed cards games but the naming mechanic is actually quite unique. While the naming mechanic is far from deep, it is enjoyable coming up with silly names for the various robots. The game also has some really cute artwork. The problem with the game is the game’s namesake mechanic. The Thing-A-Ma-Bot mechanic ruins the entire game as you can lose all of your work in the game just because you were slightly slower than another player. Unless you don’t care about who wins this rule needs to either be removed entirely or you have to significantly reduce the penalty.

If you don’t like speed memory games or don’t think the naming mechanic is that interesting, I would pass on Thing-A-Ma-Bots. If you have younger children though and the game sounds interesting it might be worth picking up Thing-A-Ma-Bots if you can get a good deal on it.

If you would like to purchase Thing-A-Ma-Bots you can find it online: Amazon