When I was young I remember seeing ads for the board game Thin Ice and thinking that it looked fun. I never ended up getting the game when I was a kid though and only recently picked it up for $0.50 at a thrift store. While I was interested in the game when I was a child, I have to admit that I didn’t have high expectations for the game as an adult. The lack of expectations mostly came from the fact that children’s games rarely hold up for adult audiences. This felt especially true for Thin Ice since it relied on a really simple premise. While the premise behind Thin Ice is pretty clever, the lack of actual gameplay keeps the game from being very interesting.

How to Play Thin Ice 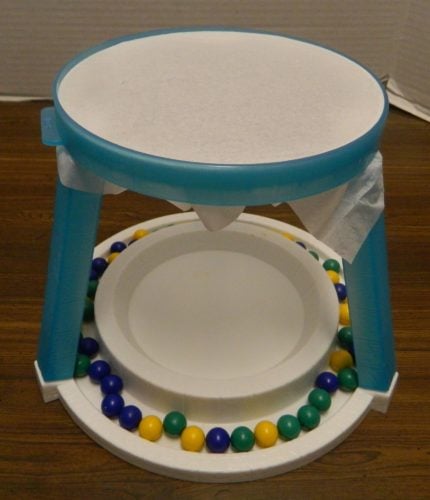 On a player’s turn they take the tweezers and grab one of the marbles. They then have to place the marble somewhere on the tissue. After placing the marble the player passes the tweezers to the next player as quick as possible. 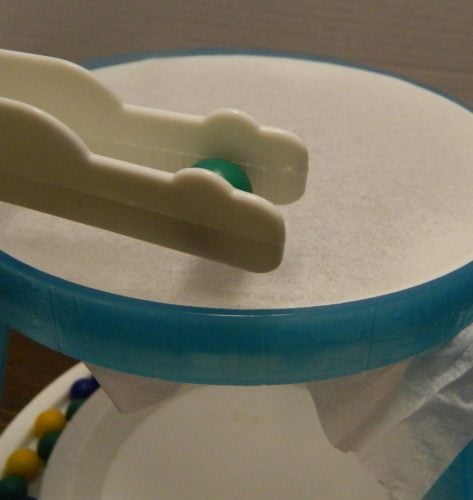 This player is placing a marble on the gameboard. Once they place the marble they pass the tweezers to the next player.

Players continue taking turns until the tissue breaks and one or more of the marbles fall through. Whichever player was holding the tweezers when the tissue broke loses the round. This player will receive a letter. The first time a player loses a round they receive an “I”. They then receive a “C” and then an “E” in subsequent rounds. When a player has received all three letters, they are eliminated from the game. 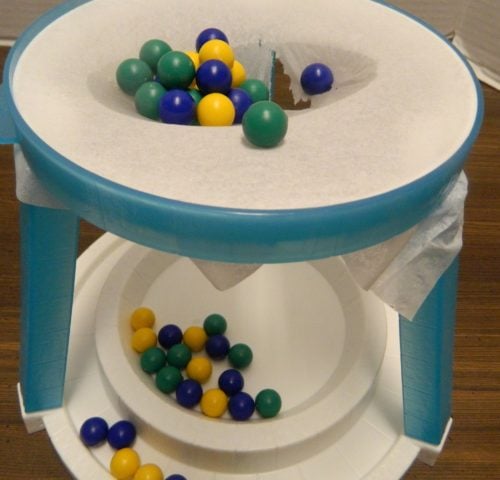 The ice has broken. The player who has control over the tweezers will receive a letter.

My Thoughts on Thin Ice

First developed in 1992 by Larry Harris Jr, Thin Ice was quite a departure from the type of games that Larry Harris Jr is mostly known for. For those of you not familiar with Larry Harris Jr, he made his name by designing Axis and Allies and quite a few other war games. I have to admit that I was surprised when I saw that he designed Thin Ice since a children’s dexterity game is about as far away from a war game that you are ever going to find.

At its core Thin Ice is a children’s dexterity game. The goal of Thin Ice is to avoid breaking the tissue. Players take turns using the tweezers to pick up a marble and place it on top of a tissue that is suspended above the gameboard. Whichever player places the marble that breaks the tissue receives a letter. When a player has received three letters they are eliminated from the game. The last player remaining wins the game.

As I already mentioned when I was a kid I wanted to play Thin Ice. I never ended up getting or playing the game but I think I wanted to play the game because I like dexterity games and in particular I liked the board game Don’t Break the Ice. As an adult I knew that the game wasn’t going to hold up but I will admit that the game’s premise was still intriguing. The idea of placing marbles on a tissue while trying not to break the tissue was an interesting idea for a dexterity game that I really haven’t seen in other dexterity games. I knew the game was going to be far from complex but it looked intriguing enough that it was worth trying out.

Being a children’s board game it is not surprising that Thin Ice is really easy to pick up and play. While I would probably recommend that adults set up the board (at least for the first couple of rounds), Thin Ice is the type of game that pretty much anyone could play. I am guessing the only reason the game has a recommended age of 5+ is the potential choking hazard from the marbles. Otherwise children of any age could easily play the game as you just grab marbles with the tweezers and place them on the tissue. I actually think the game will work best with young children.

So I don’t know how many tissues originally came with Thin Ice but I am guessing that most copies of the game have run out of tissues at this point. I will commend Thin Ice though because the game is designed where you should be able to use any type of tissues that you purchase from the store. The brand of tissue you decide to use could have a significant impact on how many marbles it can hold before breaking though. A thicker tissue is obviously going to hold more marbles than a thinner tissue. Unless you use tissues that are already really thin I would highly recommend following the game’s instructions of trying to split the tissue in half before placing it on the gameboard. We first tried playing the game without splitting the tissue in half and it ended up holding all of the marbles which made the game kind of anti-climatic. After we split the tissue in half it only held about half of the marbles.

Another thing that is key to making the game work properly is to use the water. At first I thought the water was mostly a gimmick but the game is not going to work properly without it. The reason that the water is important is because it will make the marbles wet. The water from the marbles will then be absorbed by the tissue which will weaken it. This makes the tissue sink quite a bit more in the middle and makes the tissue break faster. Without the water I am not sure if all of the marbles would even break the tissue. The wet tissue actually adds some tension to the game because at least with the tissues we used the middle of the tissue sunk a lot before finally breaking. This made it quite a bit harder to tell when the tissue would finally break.

At this point I would give Thin Ice quite a bit of credit. The idea of using the tissues and water to create a gameboard that can break at anytime is a pretty creative idea. As the tissue begins to sag more and more it can become somewhat tense waiting to see when the tissue is finally going to break. The problem with Thin Ice is that there really isn’t anything else to the game. I think you could even make a good argument on whether Thin Ice should even be considered a game.

The main reason you can debate whether Thin Ice is actually a game is that there really isn’t that much to the actual gameplay. Basically all you do in the game is grab a marble, place it on the tissue and then pass the tweezers to the next player as quickly as possible. That is all there is to the game. Unless you are extremely clumsy or careless, there isn’t much skill to actually placing marbles on the tissue. Basically the only strategy is to try and place your marble away from the other marbles. Where you place a marble usually doesn’t really matter as most of the marbles will just end up rolling towards the middle of the tissue anyways.

Instead of relying on skill the game ends up relying almost entirely on luck. After you realize that there isn’t much skill to the game you basically want to pick up your marble and place it as quickly as possible so you can pass the tweezers to the next player. The reason that this is the ideal strategy is that the longer you hold the tweezers the more risk you are in. By quickly placing your marble and passing off the tweezers you limit the amount of time where you are responsible if the tissue breaks. It really feels like the only way you can improve your odds in the game is to go as quickly as possible. Otherwise your fate mostly comes down to luck.

This is why even though the idea behind the game is pretty clever, Thin Ice is just not that good of game. For a game to be enjoyable in my opinion it usually has to involve some degree of skill or strategy. Neither are really present in Thin Ice. While the clever gameplay mechanic can be enjoyable for a round or two, with little player input it becomes boring quickly. Unless you really like silly games that involve little to no skill, I can’t see adults getting much more than a round or two of enjoyment out of Thin Ice.

While Thin Ice is not that enjoyable for adults, I will say that the game will probably work quite a bit better with younger children. The fact that the game relies mostly on luck rather than skill shouldn’t bother children as much as it will adults. This should allow young children to get more enjoyment out of the “ice mechanic” since they will be able to see past the broken gameplay. While I didn’t play the game with any young children, I would guess that Thin Ice would work really well with a younger audience.

For the most part I would say the components for Thin Ice are solid. The components are all made of plastic and don’t show a lot of detail but they are sturdy enough that they should last through extended play. As I already mentioned I don’t know how many tissues originally came with the game. I do appreciate that the game seems to work with any brand of tissues though which is nice as you won’t have to worry about running out of tissues and not being able to play the game. Basically the components serve their purpose but do little more.

Should You Buy Thin Ice?

Thin Ice is a good example of an interesting premise not being enough to make a good board game. While the main mechanic is really simple I actually found it to be pretty clever. Using a tissue to create a gameboard that you place marbles on is an interesting idea for a dexterity game. While most dexterity games are focused on stacking objects, trying to place marbles on a gameboard that is eventually going to break is a nice change of pace from most games in the genre. When you add in the water there is some suspense as the tissue sags further and further until it finally breaks. The problem is that there really isn’t much to the actual gameplay. The game doesn’t really rely on skill or strategy so the outcome basically comes down to luck. While the premise is kind of interesting, the game gets boring pretty quickly for adults. The game should appeal quite a bit more to younger children though as they probably won’t realize the game relies heavily on luck. As for as my final rating, it is kind of a compromise between the ratings that I would give the game for adult and child audiences.

If you would like to purchase Thin Ice you can find it online: Amazon