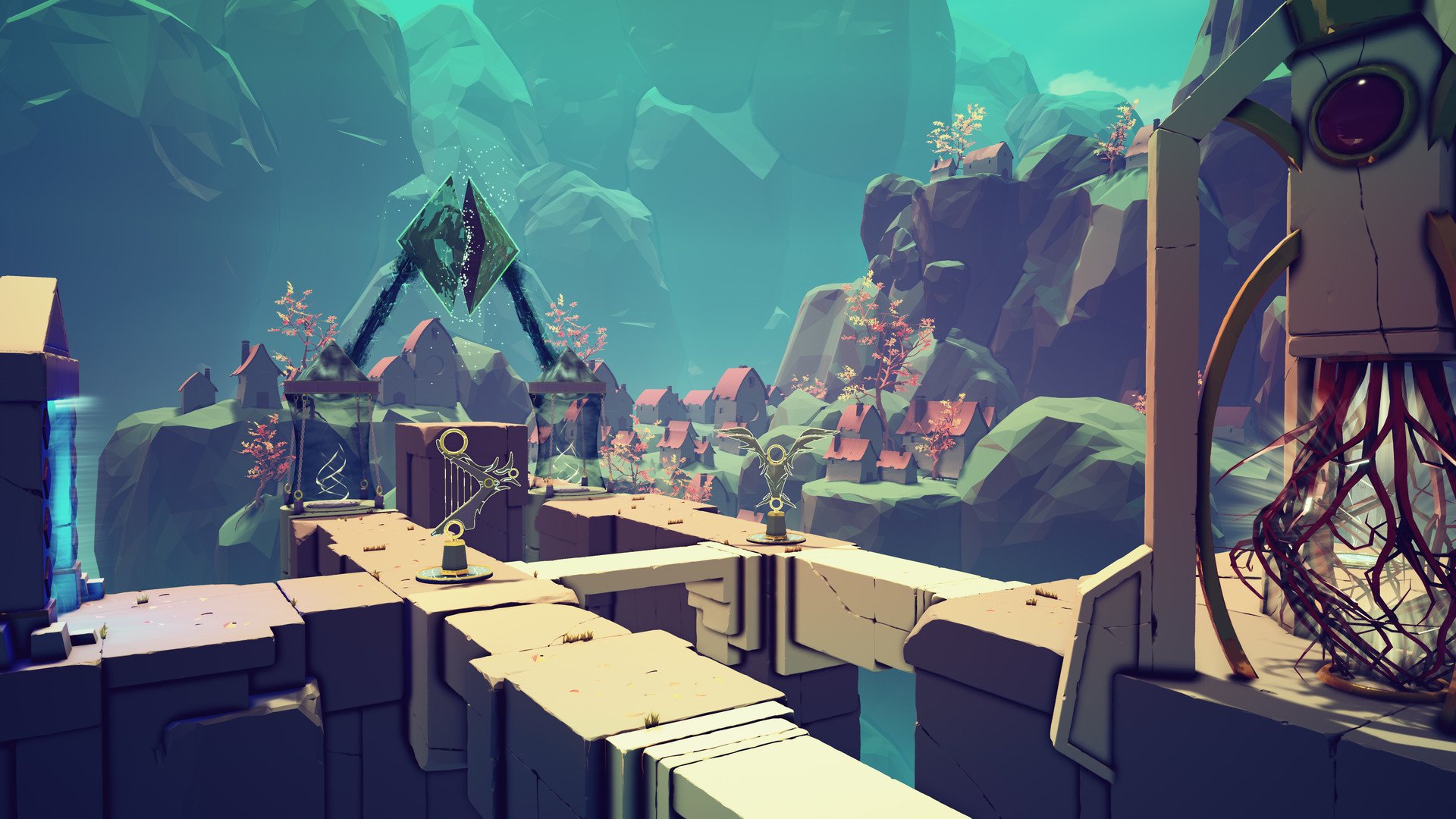 When I first saw The Sojourn I was intrigued as the game looked like something that would be right up my alley. Regular readers of Geeky Hobbies will know that I am a big fan of puzzle games as it is one of my favorite video game genres. Based on the trailer the puzzle mechanics looked interesting as I am always interested in trying out a puzzle game that forces you to think outside the box. In addition the game’s atmosphere and story looked intriguing. Like with all puzzle games though the success or failure of the game would come down to the puzzle design. The Sojourn is a fun puzzle game that takes you on a journey filled with challenging and creative puzzles.

At its core The Sojourn is a puzzle game. The game is broken down into levels/stages. In each stage the objective is to reach a portal. The path to this portal is blocked though so you need to figure out a way to get yourself past the obstacles. The main puzzle mechanic in the game comes down to the conflicting worlds between light and dark. You begin most levels in the light. In the light you can’t do a lot outside of walking towards the end goal and passing through vine barriers that block your path while in the darkness. While usually only temporary, being in the darkness offers you a lot of options to progress through the stage. Each stage has various objects that you can interact with while in the darkness. A statue allows you to swap your current position with it. These statues are used in combination with platforms which unlock gates when an statue is put on them. Then there is a harp that you can play which will bring back a bridge that has long since been destroyed. Being in the darkness also allows you to cross bridges that are only present in the darkness.

At the beginning of the game you can only access the darkness through geyser like platforms. These geysers give you limited access to the darkness which is used up with each step you take. As you progress through the game though you are given access to more ways to control the darkness. Mirrors are introduced which let you redirect the darkness to other parts of the level and create a path of darkness that you can walk through while having access to the darkness. You eventually get access to gemstones that permanently activate the objects they are placed in whether you are in the light or dark. These gemstones can be taken out and moved to other objects, but there are far less of them than you need to control all of the objects. Eventually gates are added to the levels which let you permanently stay in the darkness until you move through another gate. At the end of the game you are also given access to an eye which puts you in the darkness whenever you look at it.

The game mixes and matches these mechanics to form the core gameplay of The Sojourn. Basically the gameplay revolves around figuring out when you need to use the light and when you need to use the darkness. In each level you need to regularly switch between the two to get around the obstacles that otherwise would block your path. Most of the gameplay revolves around figuring out how to manipulate the different objects in order to create yourself a path to the exit portal.

Being a fan of puzzle games this is the one area that really intrigued me about The Sojourn. While the puzzles might not be for everyone, I really liked them. All of the mechanics in the game may seem pretty simplistic and yet the game does a lot with them. The game has at max ten different puzzle mechanics but you would be surprised by how many different combinations the puzzle designers come up with that utilize them. Getting from point A to point B might sound really straightforward and yet it can lead to some really intriguing puzzle design. Some of the puzzles are pretty straightforward while others require quite a bit of out of the box thinking. You might get temporarily stumped by some of the puzzles, but it is really satisfying when you are able to eventually solve them.

As far as the difficulty I would say that it kind of depends. Some of the puzzles can be quite easy while others can become quite challenging. The difficulty seems to vary as some of the later puzzles seem easier than the earlier puzzles. It all really comes down to how good you are at solving these type of puzzles. If you have always kind of struggled at these type of abstract puzzles, The Sojourn will probably be quite difficult and the game may not be for you. I personally found the basic puzzles to range from easy to moderately difficult. I play a lot of puzzle games though and are generally pretty good at figuring out these type of puzzles.

In the last paragraph I mentioned basic puzzles. This is in reference to the fact that I haven’t yet mentioned another element of the stages. In most of the stages there are two objectives. Like I already mentioned you have to find your way to the portal. Once you reach the portal though in most stages a new objective will appear. This additional objective is a scroll that will appear in another part of the stage. Along with the scroll are some pathways and objects that show up that you need to use to reach the scroll. If you want to pursue these scrolls you need to utilize what you learned from reaching the portal in order to work your way through the new pathways to the scroll. It is not necessary to collect these scrolls as you can just leave through the portal and skip them entirely. The scrolls seem to only give you little passages to read, unlock some achievements, and may slightly impact the story (I have no evidence that they actually impact the story). Mostly the scrolls are used to add more challenge to the game.

For the most part the scrolls succeed in their goal as they add quite a bit of challenge to the game. When playing the game I decided to collect each scroll before I exited a level. I can attest that going after the scrolls adds a lot of challenge to the game. While there are a few exceptions, getting the scroll in each level requires a lot more thought than just reaching the portal. You basically have to use the techniques you used to reach the portal and put a twist on them. To reach a lot of the scrolls you need to really think outside of the box as the solutions are usually not particularly straightforward. I would say that I typically spent at least two to three times as much time trying to acquire the scrolls as I did trying to just reach the portals.

Despite some of the scrolls being quite frustrating to figure out, I really liked their addition. I like the addition because they are purely optional. If the game didn’t include the scrolls I probably would have found the game to be on the easier side as outside of a couple puzzles I didn’t have many struggles reaching a lot of the portals. When you add in the scrolls though the puzzles can become quite challenging. Unless you are a master of these type of puzzles they should provide you with plenty of challenge. With them being optional though you can skip them if you don’t want to spend the time trying to figure them out or you just want an easier experience. I would recommend at least trying the puzzles though as they are most of the best puzzles in the game. It is also quite satisfying when you eventually figure out how to reach them.

So at this point you are probably wondering why I haven’t yet addressed The Sojourn’s story. The reason for that is that I don’t really know what to think about it. The Sojourn isn’t the type of game that straight out tells you the story. The story is told more through background elements. Most of the story is told through statues that you walk past as you move between levels. These statues depict the life of a child and the characters they encounter throughout their life. The overall story is about light, darkness and the nature of reality. The story is pretty interpretive/abstract as you will get what you want out of it. I didn’t think the story was bad, but I didn’t really find it to be a selling point either. I could see the story really speaking to some players though. I think the thing that I liked the most about the story was the world that the game builds for itself. The game’s visuals are quite good and they create an interesting world that you want to explore.

While not a huge issue I did want to bring up one thing about The Sojourn that kind of annoyed me. Maybe it was just me but the harps started to really annoy me after a while. I actually really liked the mechanic as it adds some interesting mechanics to the game. The problem is that for some reason the game has only one sound clip for all of the harps in the game. The first couple of times you hear it it sounds pretty nice. It starts to get irritating as you continue to play the game though as you likely will end up hearing the same notes played over a hundred times. I don’t know why the game couldn’t have added a few more tunes to break up the monotony or just ditched the harp music entirely.

For my video game reviews I generally like to give players a good estimate of how long it took me to beat the game. For The Sojourn I can’t give you a great estimate for a couple reasons. First I haven’t quite beat the game yet even though I appear to only have a couple puzzles left. Second The Sojourn’s length is going to depend on a couple factors. The biggest factor is going to be whether you try to pursue the scrolls. The scrolls are completely optional but they add a lot of the length to the game. If you decide to ignore the scrolls the game will be considerably shorter than if you try to acquire all or at least most of them. The length is also going to depend on how good you are at these type of games. My best guess for the length would be 10-15 hours if you try to acquire all of the scrolls and considerably shorter if you don’t go for the scrolls.

For the most part The Sojourn is what you want out of a puzzle game. A good puzzle game relies on creative and challenging puzzles. Both are present in The Sojourn as the game takes its simple puzzle mechanics and mixes and matches them to create good puzzles that are both challenging and force you to think outside of the box. The difficulty can vary at times but the game gives players optional objectives to make the game as simple or as challenging as they want. Fans of these type of abstract puzzle games should really enjoy the game. While I really enjoyed the gameplay I found the story to be a little disappointing. This is mostly because the story is quite abstract as most of it comes from observing statues that you walk past. The Sojourn does create a really interesting world though.

The Sojourn will be available on PC (Epic Store exclusive for a year), PS4, and Xbox One on September 20th, 2019.