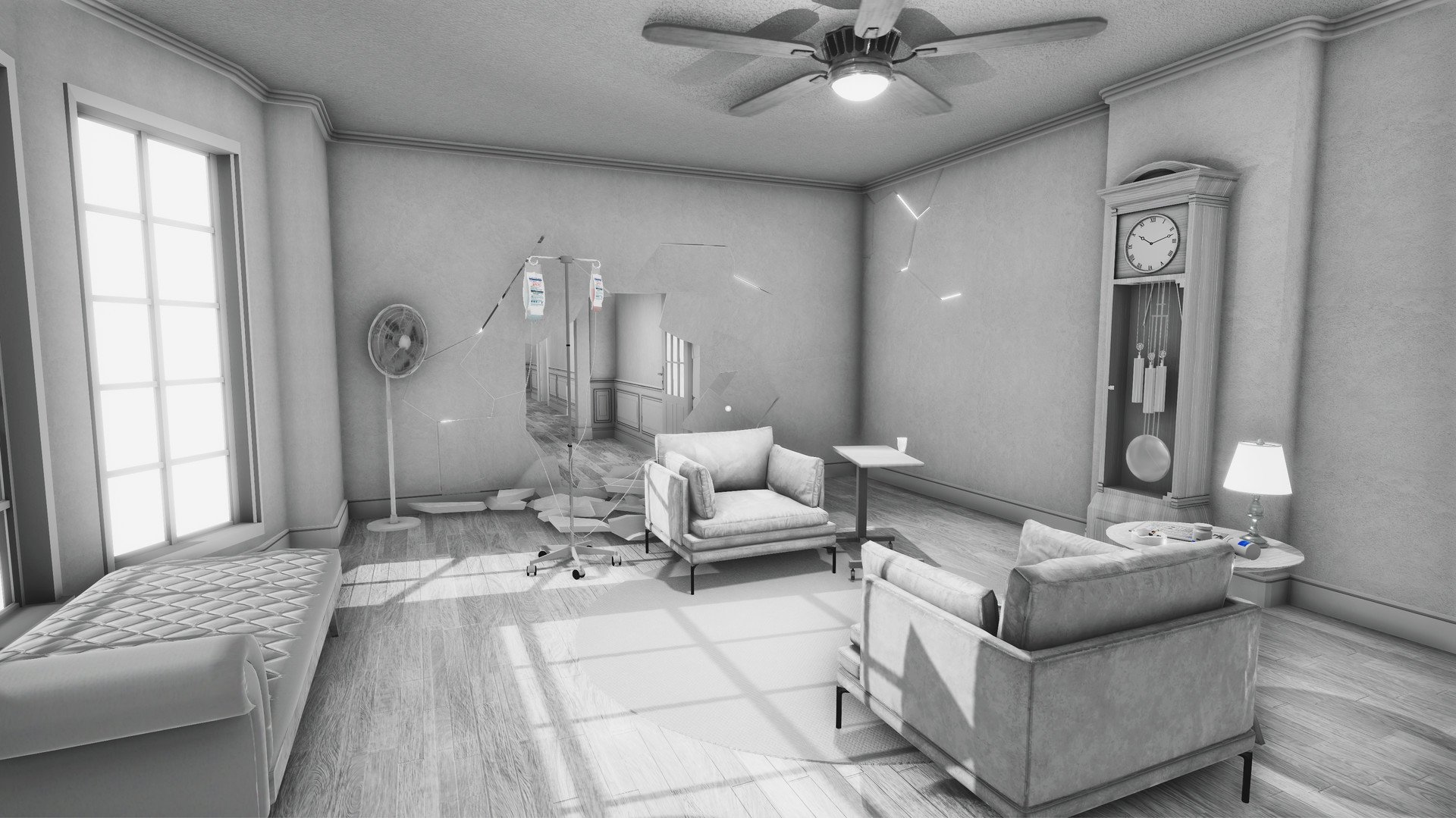 One of the most controversial video game genres that have popped up since the rise of indie games has been the genre referred to as “walking simulators”. I have never been a big fan of the title as it feels like it is meant to be belittling of the genre. I can see why a lot of people don’t like the genre as the games don’t have much traditional video game gameplay. Instead of featuring a lot of action they mostly rely on storytelling as they are more of an interactive story. Today I am looking at The Shattering which looked like an interesting walking simulator with a unique style and intriguing story. The Shattering is not going to be for everyone as it is not your typical video game experience, but it tells an engaging story through immersive storytelling.

In The Shattering you play as John Evans. You wake up in a white room as a doctor asks you who you are. You are suffering from memory issues as you have forgotten much of your life. You are told to follow the doctor’s voice as he tries to guide you through your past memories to figure out who you truly are. As you dive deeper into John’s mind you realize things are not as they first seem. Can you unlock John’s mind to discover what lead him to his current situation?

As I mentioned earlier if I were to classify The Shattering I would say that it most closely resembles a walking simulator. I think this belittles the game in a way, but it is the most accurate genre that I can come up with. For those that are not familiar with walking simulators the premise is pretty simple. Instead of featuring lots of action, puzzle solving, or strategic planning; walking simulators are mostly focused on storytelling. The gameplay in The Shattering is pretty basic. It mostly involves walking around the environment exploring John’s memories. In addition to walking you can interact with various objects unlocking new memories and progressing the story. You are also occasionally given a choice between a number of options. I am not entirely sure how big of impact these decisions ultimately have on the game.

That is basically all there is to the gameplay. The gameplay pretty much revolves around exploring and interacting with objects. There really aren’t any action sequences or tough puzzles that you need to solve. The game is pretty linear outside of some of the decisions you make maybe having an impact in how the game proceeds. I would honestly classify the game as an interactive story. Walking simulators are generally one of the most controversial video game genres as some people really like them while others hate them. Your opinion of the genre will likely apply to The Shattering as well. If you are more into the gameplay than the story The Shattering probably won’t be for you. Those that are interested in an engaging story though should continue reading.

With The Shattering mostly being based around its story it is key that the story is strong. I would say that the story is pretty good for the most part. To avoid spoilers I won’t go into too much detail as it will ruin a game that mostly relies on its story. I will say that the story is mostly about a man suffering from mental illness as he tries to piece his life together to try and figure out what lead him to his current situation. Some people may find this kind of story more touching/difficult to handle as mental illness is something that touches some people more than others.

For the most part I thought the story was good. I don’t think the story will be for everyone as it is a story about mental illness. If this doesn’t seem like your type of game it probably won’t be. Those that think the premise sounds interesting though should enjoy the experience. I am not entirely sure what term I would use to describe the story. I would probably say that the best word would probably be emotional. I can see the story really touching some people. While some elements of the story are fantastical, the overall story is quite grounded and meaningful.

The thing that really helps sell the story and is probably The Shattering’s greatest strength is its storytelling in general. The game genuinely deserves a lot of credit for how it decides to tell its story. The story doesn’t really follow a traditionally linear story. The game is broken down into four chapters along with a prologue and epilogue. Each chapter tells a story about a different part of John’s life. Each chapter uses its own unique way of telling the story. This part of the game is really clever as the designers do a great job setting the mood. From the different transitions to how the game represents events from John’s life without ever actually showing a human being is so creative. After playing the game it is clear that the developers are clever storytellers that have a good eye for telling stories in unique ways.

What helps the story is that the game has a great overall atmosphere. I am far from an artist so I won’t do the game’s graphical style and overall atmosphere justice. For an indie game The Shattering looks stunning at times. The game does a great job balancing between realistic environments and more fantastical elements. The game looks great which creates an engaging atmosphere for the game. The audio is great as well from the background music to the voice acting. Due to the trailer and the fact that the game was labeled a psychological thriller I was curious whether the game was going to be scary/dark mostly because I am kind of a coward when it comes to horror movies and video games. The game can become quite dark at times with some disturbing images, but I wouldn’t say that the game ever becomes particularly scary.

I honestly enjoyed The Shattering as it was a unique experience. Like most walking simulators though it is going to have a specific audience and won’t appeal to everyone. Your enjoyment of the game is really going to depend on your opinion of video game stories. If you don’t usually care for them or even skip cutscenes to get to the next piece of action you will not enjoy The Shattering. The Shattering is the type of game that you mostly just sit back and play while you fully explore the story. People who value story in their games will probably enjoy The Shattering if they think the premise sounds interesting. If gameplay is what is most important to you though you will likely be disappointed by the game.

Other than the gameplay not appealing to everyone I would say that the other biggest issue with the game is the length. This is not all that surprising since walking simulators are usually on the shorter side. This is partially due to the fact that the gameplay mostly relies on the storytelling which means it doesn’t have a lot of replay value. If you want to get all of the achievements or find the alternative ending there will be a little replay value in the game. The amount of time you get out of the game will likely depend on the type of player you are. If you are the type of player to just observe the story and then move on I can see the game only taking around 3-4 hours. Those that really want to explore can probably get around 4-5 hours out of the game. If you want to go through the game a second time it should add a little more time to the game. With a retail price of $20 the amount of value you get out of the game will likely depend on how much you value length when determining when to purchase a game.

The Shattering is the type of game that is not going to be for everyone. Probably the genre that best fits The Shattering is the walking simulator genre. Basically the gameplay involves walking around and interacting with objects. Like most walking simulators the gameplay is not a huge selling point for the game as it feels like more of an interactive story. Therefore people who don’t really care for video game stories are unlikely to get much out of the game. The game’s biggest selling point is the story which thankfully is a strength for the game. The story can sometimes be dark, but it is well told. I would say The Shattering’s greatest strength is the fact that it does a great job presenting the story in an interesting way. Fans of a good interactive story will likely enjoy The Shattering. With it being a walking simulator though it is on the shorter side as most players could probably finish the game within 3-5 hours.