Originally created back in the 1950s the Muppets have a large fanbase. Due to the Muppets popularity, there have actually been quite a few different Muppet board games made over the years. Today I am looking at one of the three The Muppet Show games which was created in 1977. In this Muppet Show Game you are trying to help out Kermit the Frog by getting the cast ready for the show. Your goal is to get your two Muppets and their set in position before the other players. Before playing the game I thought it was going to be another bland roll and move game but then I saw the script and I was intrigued. The designers of The Muppet Show Game tried something new by adding the script which unfortunately only makes the game even worse than your typical roll and move game.

How to Play The Muppet Show Game 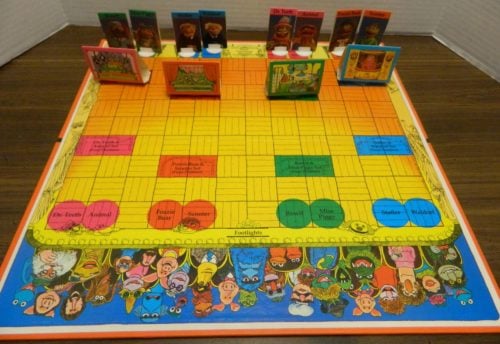 A player begins their turn by passing the script to the player on their left. The current player then spins both spinners. The two spinners will give you an act and scene number. 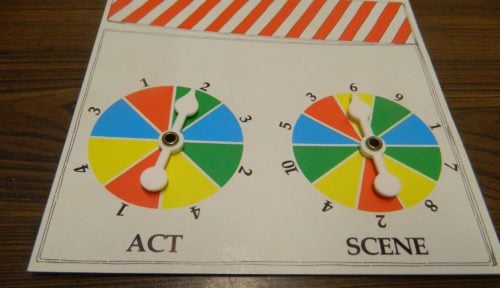 This player has spun act two and scene six so they will look for the corresponding act/scene combination in the script.

The act and scene are looked up in the script to determine what the player will move on their turn. The script is as follows: 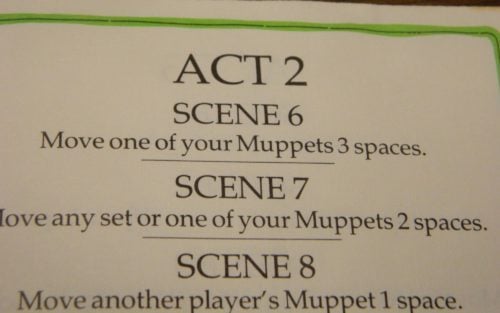 The player spun act two scene six so they will move one of their Muppets three spaces. 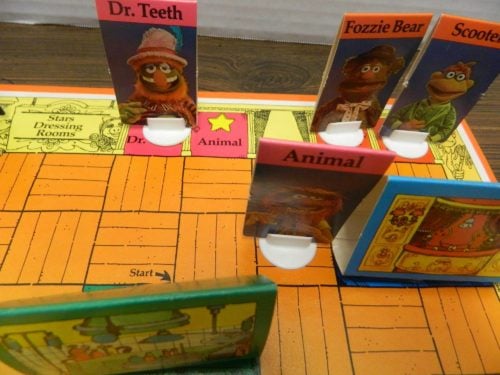 The Animal playing piece has been moved forward two spaces and right one space for a total of three spaces. 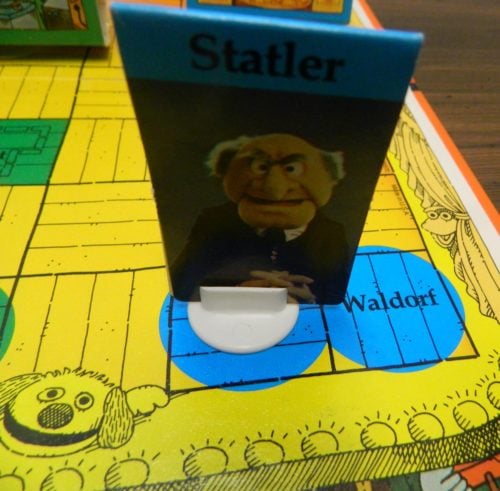 Statler has been moved to his final spot so he won’t be moved for the rest of the game.

The first player to get both of their Muppets and their set into their final positions first wins the game. 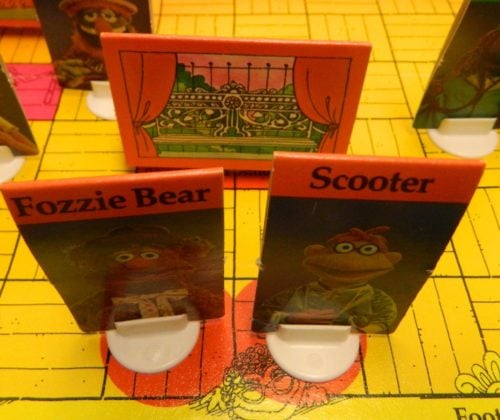 This player has gotten both of their Muppets and their scene into position so they have won the game.

My Thoughts on The Muppet Show Game

While The Muppet Show Game has some unique mechanics (which I will get to shortly), at its heart it is your typical roll and move game. The game technically uses spinners but otherwise the basic mechanics are the same as your typical roll and move game. You are given a number of spaces to move one of your playing pieces with the ultimate goal of getting all of your pieces to their finish spaces.

Unlike a lot of roll and move games, the gameboard is a grid. Instead of just moving in a straight line, this gives players some flexibility with regards to movement. You can move your pieces forward, backward, sideway and occasionally diagonally. While this doesn’t drastically change the roll and move gameplay, it is better than your typical game from the genre since there is actually some decision making to be had in the game. Your decision for any given turn is pretty obvious but the game actually lets you make decisions which is better than most games in the genre. Generally you won’t be able to make decisions that will win you the game but if you make poor decisions you are going to decrease your chances of winning the game.

Before playing The Muppet Show Game I hoped that the game would have more strategy than your typical roll and move game. The instructions proposed the ability to use sets and Muppets in order to block the other players. I thought this would add some strategy to the game as players could strategically block off the other players in order to slow them down. In practice this is possible in the game but it is rarely worth the effort. It is not that hard to block another player but it also doesn’t usually impact a player very much. Blocking a player usually only wastes one or two of that player’s moves which hurts a little but doesn’t have a huge impact on the game.

So lets get to the script which is the one truly unique thing about the game. Before playing the game I was intrigued by the script mechanic as I thought it could bring something unique to the game. Giving players different actions to perform on each turn could have been an interesting addition to a roll and move game. As I began playing the game though I quickly realized that it was going to be more of a hassle than it was worth. You end up spinning two spinners which determines which action you can perform on your turn. All this mechanic does is add another step to the process of determining how many spaces you get to move. This leads to the game taking longer as you have to constantly refer to the script. We ended up having one player be the designated script reader in order to speed up the game a little.

In addition to just being a hassle, the script mechanic seems to add even more luck to the game. As you have no control over what you spin, you have no control over what action you get to take on your turn. If you spin well, you will get to move your set or one of your Muppets quite a few spaces. If you spin poorly you will either get to only move one space or you might only be able to move another player’s piece. Then there is a chance that you will be given a direction to move diagonally when you are unable to. While all games in this genre rely heavily on luck, it feels like The Muppet Show Game relies on even more luck than your typical game from this genre. Outside of a player making a terrible strategic move (which is highly unlikely), the luckiest player is going to win The Muppet Show Game.

All of these problems with The Muppet Show Game are compounded by the fact that the components aren’t very good either. This is not that surprising from a 1970s Parker Brothers game. All the game includes is the gameboard, the script booklet and cardboard pieces. The cardboard pieces are quite thin which leads to them getting creased pretty easily. The sets in particular don’t stay together where the original owner of my copy of the game taped the bottoms trying to keep them standing upright. The gameboard is your typical Parker Brothers board from this era. The one good thing about the components is that the artwork is pretty good and will appeal to fans of the Muppets. The artwork doesn’t offset the other issues with the components though.

Should You Buy The Muppet Show Game?

The Muppet Show Game tried to do something new with the roll/spin and move genre but unfortunately it doesn’t work. The script mechanic could have been interesting but it just adds unnecessary steps to figuring out how many spaces you get to move. You constantly have to reference the script which feels like a waste of time. Since the script doesn’t add much to the game, you are basically left with another generic spin and move game where you try to get all of your pieces to the finish before the other players. The game tries to add some strategy by being able to block the other players but you are usually better off just moving your own pieces. This leads to the game relying almost entirely on luck. On top of all of this, the component quality leaves something to be desired. These issues lead to The Muppet Show Game being worse than your average roll and move game.

Unless you are a big fan of the Muppets I don’t really see a reason to pick up The Muppet Show Game. The gameplay is lacking to the point where I only think children and their parents could have any real fun with the game. If you are a fan of the franchise, I could see you maybe getting a little enjoyment out of the game. I see The Muppet Show Game being more of a collectible than an actual game though. I would probably only recommend picking it up if you really like the Muppets and can get a good deal on the game.

If you would like to purchase The Muppet Show Game you can find it online: Amazon