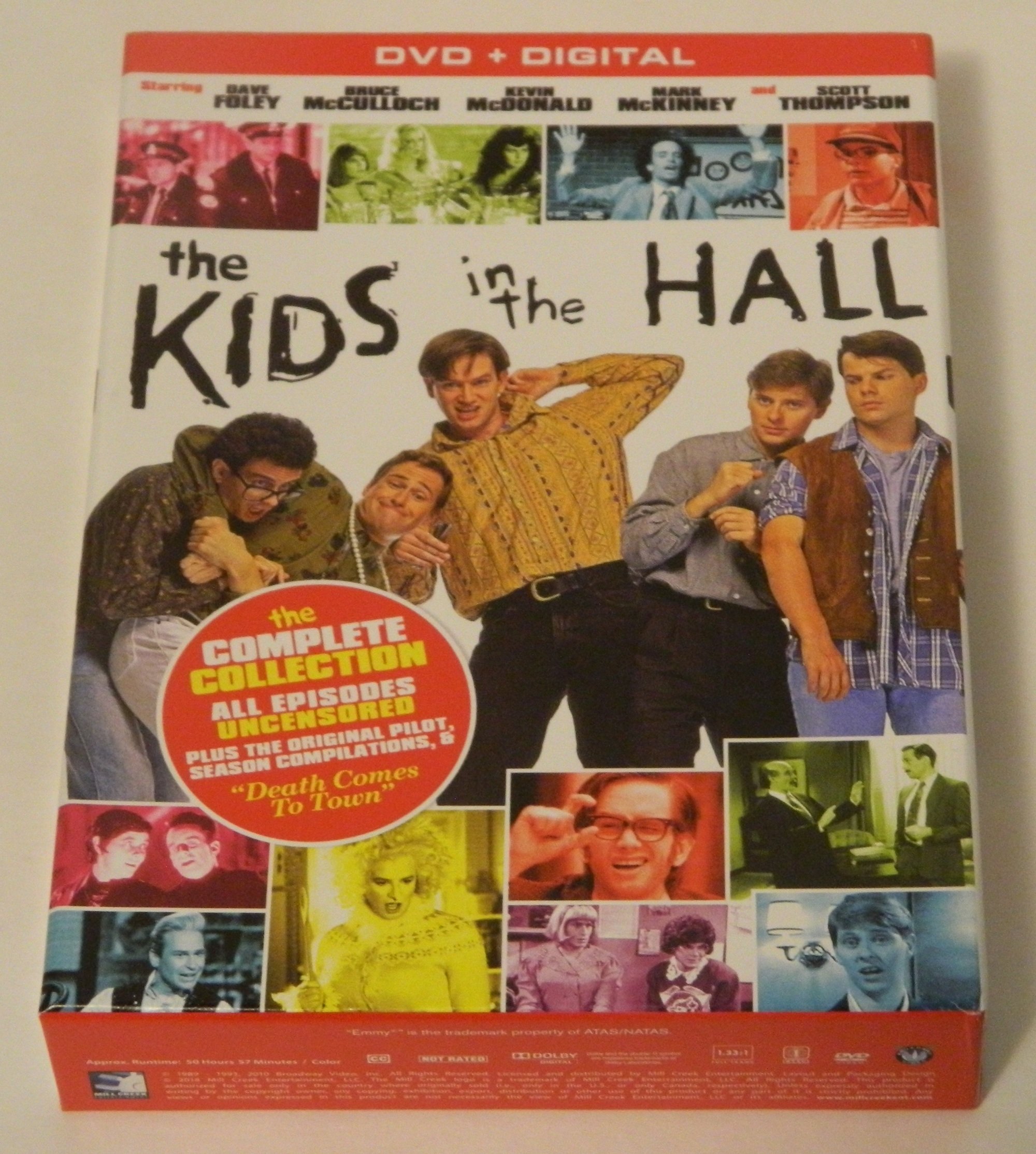 The Kids in the Hall is certainly one of the most well-known sketch comedy shows of all-time but I had never seen an episode of the series until the Complete Collection was re-released recently by Mill Creek Entertainment. Going into the series for the first time, I expected it to be like most sketch comedies; hilariously funny at times but with a lot of “misses” as well. After watching the first half of season one, that’s pretty much exactly what my thoughts were. While some sketches (like “The Daves I Know”) had me laughing out loud, others were boring or even a little offensive (the show started in 1988 but they did have a tendency to heavily use a word that is pretty offensive in today’s world). However, I would say that the funny sketches significantly outnumber the unfunny ones and the series has gotten funnier and funnier with each episode I watch.

As always with sketch comedy shows, every viewer is going to have different favorite sketches (as well as ones they thought were completely unfunny). Another person might think that person’s favorite sketch was terrible and like one of their most hated. That’s just the way sketch comedy is, you can’t please everybody with each sketch. The ultimate goal of a sketch comedy is just to have more sketches that are winners than ones that most people would consider failures. In the early episodes I watched for this review, some of my favorite sketches included “The Daves I Knows” (Bruce McCulloch sings a funny song about his acquaintances that are named Dave), “Explore Scott” (a tourism-like video asking viewers to visit and explore Scott Thompson’s body part “attractions”), “Citizen Kane” (where a character explains a movie he watched last night that is clearly Citizen Kane but he can’t be convinced of it), and “McGuillicutty and Green” (a magician who has the worst straight-man ever). That’s a pretty big mix of comedy styles and all of them managed to make me laugh. This doesn’t even include the short sketches that fill out the episodes (like the Headcrucher and Thirty Helens Agree) that are usually worth a few quick laughs. Most episodes have at least one great sketch, a couple that are good for a few laughs, and of course a stinker or two. The quality of the episodes also keeps rising as the Kids get more and more comfortable with their comedy styles.

The only major problem I have with the show itself is the extensive use of a specific slur I won’t repeat (one regarding gay people). I’m not sure if this is an ’80s thing, a Canadian thing, or what but that word would certainly not be appropriate today. However, since one of the cast members (Scott Thompson) is gay, I know there was no malice intended, it’s just awkward to listen to nowadays. The slur is so distracting that basically every sketch that uses it often (unfortunately quite a few) made me uncomfortable enough to the point where I couldn’t find any humor at all in them. I would usually just find myself hoping that the sketch would end soon and something funnier would appear. I know this was a different time and they weren’t trying to be offensive, but the sketches that use that slur are outdated and kind of awkward to watch. The show also occasionally uses blackface (which I am also not a fan of) but they use it pretty sparingly and usually in a pretty tame way. Even though I know the Kids weren’t intending to be offensive, I wish both of these things would have been left out of the sketches. They aren’t funny at all and they just make the sketches more awkward and uncomfortable to watch.

This release of The Kids in the Hall: The Complete Collection is meant to be more of a budget release than previous times the series was released on DVD. Because of that, Mill Creek went with the dreaded DVDs in sleeves method of packaging. Due to this, if you are a stickler for getting scratchless DVDs, this is probably not the release for you since at least a few of them will probably have them before you even pop them into the DVD player. However, the packaging is slightly better than older Mill Creek Complete Series releases as the outer box is much sturdier, which should help protect the discs a bit more (at least from crushing). This version of The Kids in the Hall: The Complete Collection is also compressed down to 12 discs (versus 22 discs for the more expensive releases from earlier years), meaning the video quality is a bit worse as well. This release does include the original pilot, the season compilation episodes, and the 2010 miniseries Death Comes to Town (which has mixed reviews). As far as I can tell, this is the first time Death Comes to Town has been included in a complete series release of The Kids in the Hall (but it has been released individually). For those who value DVDs that are completely unscratched and like to get the best possible video quality, this is probably not the release for you. I would suggest buying one of the more expensive releases. However, for those of you who factor in price (or don’t really care about scratches or slightly worse video quality), this is significantly cheaper than the other complete series releases of The Kids in the Hall ($32 on Amazon at press time versus $119.99 for the other release). You might have to get some blank DVD cases to help protect your discs but I would take that and the slightly worse video quality over paying almost four times as much any day of the week.

The Kids in the Hall: The Complete Collection is definitely worth a purchase for fans of comedy (especially sketch comedy). Of the episodes I have watched so far, I gave most at least a 3/5 with just a few of the weaker ones dipping down to a 2.5. My grading curve is definitely on the upswing though with later episodes inching up towards grades of 3.5 to 4/5. I expect my average rating to continue to increase as the cast becomes more and more talented and aware of what works and what doesn’t in the later seasons. While this release isn’t perfect (it comes in sleeves and the video quality isn’t great), it is also a lot cheaper than prior releases. Personally, I’m fine with the packaging and the video quality is good enough so I would recommend this Mill Creek Entertainment version.

The Kids in the Hall: The Complete Collection was released on DVD on February 13, 2018.

Pros: Cons: Amazon: Buy The Kids in the Hall: The Complete Collection on Amazon