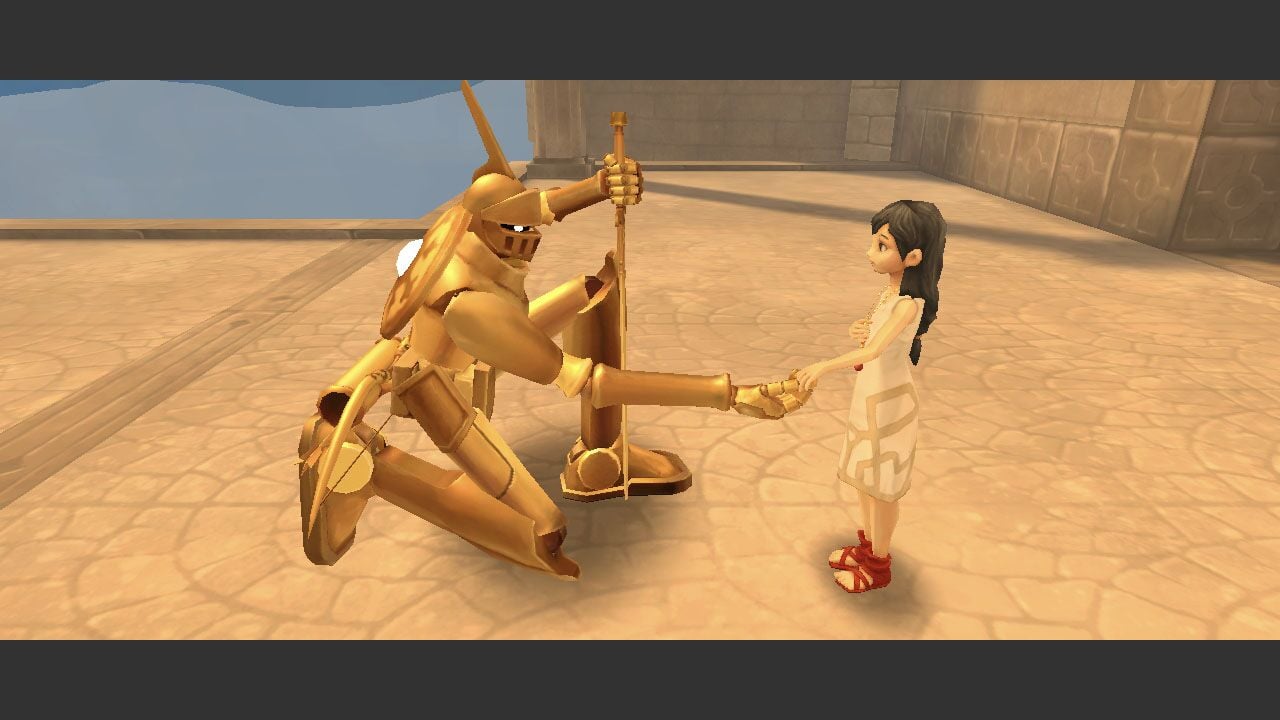 When I first saw The Girl and the Robot it reminded me a lot of Ico. I haven’t played Ico in many years but what I really liked about that game were the mechanics where you used the two different characters together to solve puzzles. While the two games share some things in common, the games also play quite a bit differently.

The first thing that stands out in The Girl and the Robot is the game’s world/atmosphere. Despite being an indie game, I have to give a lot of props to the game’s artwork/graphics/music. The graphics are really good and create an interesting world that you want to explore. You can tell that care was given to designing the world. The game actually uses the environment to tell the story since there is not a single spoken word in the entire game. While the game’s story doesn’t answer all of your questions (more on this later), the game presents a charming story of a girl and her robot friend who are trying to escape the castle that they have been trapped in for a long time.

In addition to creating a great environment, care was put into the game’s puzzles. The puzzles are pretty creative and are well thought out. I love how the puzzles are weaved into the game’s world instead of just being thrown into the world. The basic puzzle structure in the game mostly involves using the girl or the robot to reach switches/buttons which open up a path for the other character. The puzzles involve a lot of switching between the two characters but the game comes up with some interesting ways of using these mechanics. My only problem with the puzzles is that I didn’t find them to be very difficult. I can’t think of any puzzles that really challenged me since a lot of the puzzles are pretty straightforward. If you want to be really challenged The Girl and the Robot probably won’t challenge you that much.

While I liked a lot about The Girl and the Robot, I have to admit that I dreaded every time combat came up. The combat is easily the worst part of the game in my opinion. The problem with the combat is that it is so dull and the controls could be a little more responsive. Basically combat boils down to holding the block button until the enemy attacks. You then just keep pressing the attack button until you kill the enemy. The game has a dodge button but there really isn’t any reason to use it since your block stops all attacks. The robot’s movements are also kind of clunky so I don’t know if it is even possible to dodge enemy attacks.

The bigger problem with the combat involves the girl though. The girl has absolutely no attack ability and gets captured by any robot if it gets close enough to her resulting in a game over. This essentially turns the game into an escort mission whenever combat comes up. When you enter a combat area you basically want to find an hiding spot for the girl. You then keep her there while you patrol the rest of the area with the robot killing all of the enemies.

Storywise I can see why the game did this but I don’t think it works that well from a gameplay perspective. When you get to areas where you have to move the girl without having access to the robot (mostly towards the end of the game), you basically just have to run around hoping that you don’t run into any robots. While the girl is faster than the robots, you still have to pretty much guess which direction to run in. It doesn’t help that the camera at times doesn’t want to cooperate which makes it easy to run right into a robot that you couldn’t see. You basically have a trial and error period as you find out where to run to avoid the enemy robots. While I don’t have a problem with the girl not being able to attack the robots, I think the game should have given the girl a dodge or something which would have let her avoid robots that she randomly runs into.

Overall The Girl and the Robot took me around four and a half hours to complete. If I didn’t have to keep replaying areas where I was trying to run away from robots with the girl and getting caught all the time, I would guess that the game would take closer to three and a half hours. The length is not bad but I was hoping for a longer game especially since the game ends on a cliffhanger with the dreaded “to be continued”. The game ends abruptly like it is supposed to lead into another game. The biggest issue with the short length is that the game was really starting to get going when the game ends. If the game does get a sequel I would like to see how it incorporates the different mechanics introduced in The Girl and the Robot.

I have to say that I am really conflicted about The Girl and the Robot. There is so much I like about the game. I love the game’s world/environment. Care clearly went into designing the game. The story is interesting. The puzzle designs are clever even though they are a little on the easy side. The problem is that every time a combat section came up I dreaded it. The combat is so dull and there are too many situations where it just feels like an escort mission. The Girl and the Robot is also kind of on the short side at only three and a half to four hours.

The Girl and the Robot