Having played so many different board games, I have encountered games with a lot of different themes. The Game of Maze is the first game I have played that has featured hedge mazes though and may be the only such game in existence. The maze theme has proven to be a good theme for games in the past since Labyrinth did a pretty good job utilizing the maze theme. While Labyrinth and The Game of Maze have next to nothing in common outside of theme, I was curious how The Game of Maze would play. After playing The Game of Maze I really didn’t find anything drastically wrong with the game outside of it being really dull.

How to Play The Game of Maze

Each player will choose a color and puts one of their pawns at the beginning of the maze and one in the middle of the maze on the two spaces that are pointed to by the man and woman on the board.

On a player’s turn they roll both dice. They then use the numbers rolled to move either one or both of their pawns. The player can choose to use one die to move both of their pawns or they can use both of their dice on the same pawn. The player can move their pieces in any direction on the board but must move each piece in only one direction each turn.  When using both dice for the same pawn you can move the pawn with one number first and then move the piece with the other die. 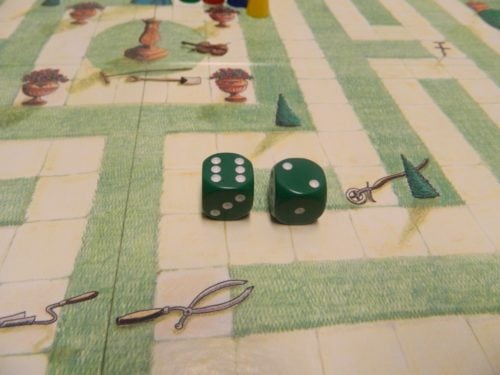 If a player rolls doubles they will get another turn. 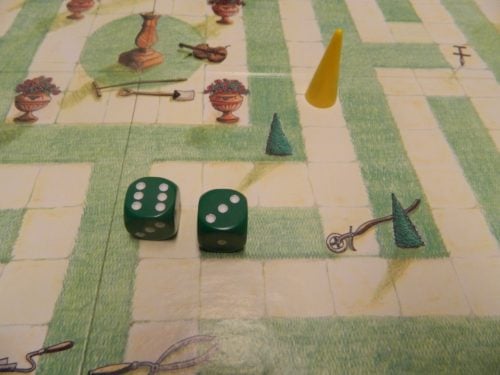 If the yellow player uses their three they will land on the garden implement. They could then use their six to move past it. 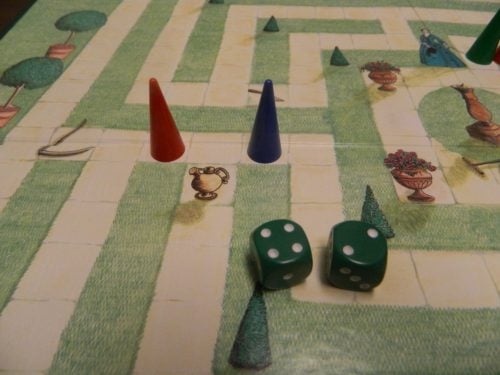 The blue player could use their two to land on the same space as the red piece and thus banish them to one of the corners or the middle of the board.

The first player to get both of their pawns on the same space (by exact count), wins the game. 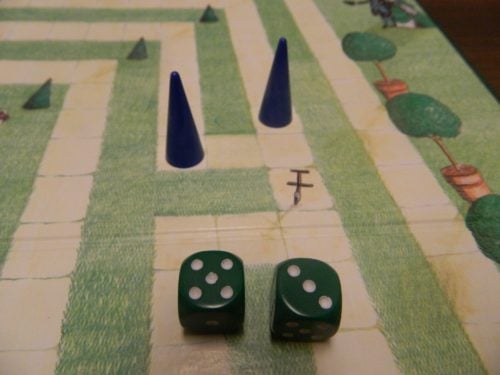 The blue player can use the three to move one of their pieces to the same space as the other piece which would win them the game.

My Thoughts on The Game of Maze

While it should already be pretty obvious, The Game of Maze is the very definition of a roll and move game. You roll the dice moving your pieces around the board hoping to land both of your pieces on the same space on the gameboard. You most likely have already played a game pretty similar to The Game of Maze at some point in your life. Other than just rolling and moving there are two other mechanics in The Game of Maze.

The other mechanic is the idea of banishments. This type of mechanic has been used in Parcheesi, Sorry, Trouble, and quite a few other board games in the past. I would say that it is probably the most important mechanic in The Game of Maze. The reason it is so important is that it can drastically change the game. While you could win the game without using the banishment mechanic I think it will be really hard to. Since you are always so close to the other players it is really hard not to be banished by another player or banish another player. The banishment can be really significant as well since you could be close to winning and then another player could send your piece to the other side of the board basically sending you from first to last in one move.

Since it is so easy to mess up players with banishments, I actually think the easiest way to win is to use the banishments for your own benefit. It is really hard to win the game without the banishments since when you get close another player will likely send one of your pieces to the other side of the board. This means that The Game of Maze could take a long time as players just keep sending one another to opposite sides of the board. The fastest and possibly best way to win the game is to use banishments to move your pieces closer together. Basically you want to have one of your pieces in a corner and then try to banish one of the other player’s pieces. You can then use the banishment mechanic to send your piece in the corner close to your other piece.

Like with all of these type of games, there is a kingmaker problem the The Game of Maze. Towards the end of the game there is likely going to be two or possibly three players competing to win while the other player have no chance of winning. While some games will end with one player just reaching their other piece, it is just as likely that the player(s) that are out of the game will impact the outcome. Since these players have no real chance of winning the game they can decide to banish one of the players and thus help one of the other players win the game. There really is no way the game could have prevented this but it does impact the game.

I would not say that The Game of Maze is a good game but I can’t say that there is anything terribly wrong with it either. It is just another bland roll and move game. There are no broken rules. The game is easy to learn and play. If you want a simple game that you don’t have to put a lot of thought into, you might have some fun with The Game of Maze.

While there is nothing really wrong with The Game of Maze, the biggest problem with the game is that it is just boring. The game is one of the most generic roll and move games you will ever find. You just roll the dice and move your pieces. Then the next player does the same and the process keeps repeating until someone wins. There is a little strategy in deciding which pawn to move and whether to banish people. It usually doesn’t matter though or the best option is really obvious. All of this leads to The Game of Maze being a really dull game.

As far as the components I was both impressed and disappointed. I thought the artwork on the gameboard was pretty good. It works well for the game’s theme. At the same time though I was disappointed with the playing pieces. Next to the game’s artwork the plastic cone playing pieces feel cheap. The plastic is pretty thick but I don’t know why the game couldn’t have used better components. For example using wooden or even plastic pieces that represented humans would have added quite a bit to the game.

Should You Buy The Game of Maze?

The Game of Maze is an interesting game. I didn’t really like the game but there isn’t anything tremendously wrong with it either. It is a very basic roll and move game. The banishments are a little too powerful and could lead to the game dragging on. The game also has a kingmaker problem. Otherwise the biggest problem with The Game of Maze is that it is just boring. On a lot of turns your moves don’t really matter and on the turns that they do the best move is usually pretty obvious.

If you would like to purchase The Game of Maze you can find it online: Amazon