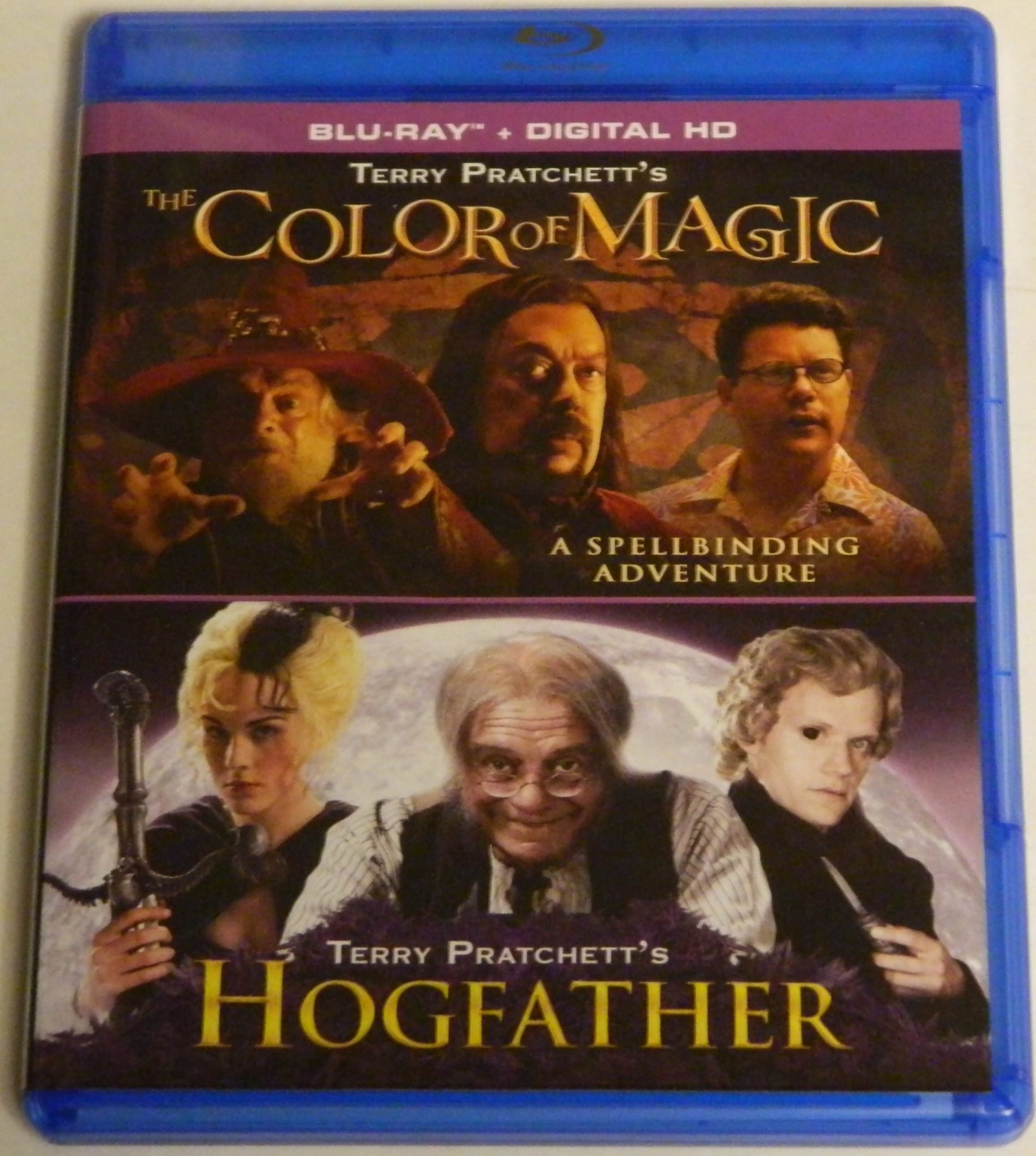 First published back in 1983 the Discworld franchise has developed a strong fanbase over the years. Over 32 years Terry Pratchett wrote 41 different books in the Discworld universe. For those of you who are not aware the Discworld franchise is basically a satirical take on your typical fantasy story. While I have been familiar with the Discworld franchise for a while I have yet to read any of the books. As a fan of fantasy and satirical humor I really don’t know why I haven’t as the series seems right up my alley. With so much source material it is not much of a surprise that there have been various adaptations including video games and board games. Surprisingly the series has not had as many movie adaptations as I would have expected. Today I am looking at two of these adaptations The Color of Magic and the Hogfather. Originally airing on Sky1 in 2006 and 2008 these two mini-series/movies have recently been re-released on Blu-ray by Mill Creek Entertainment. As the series seemed right up my alley I was really interested in checking them out. The Color of Magic and Hogfather are funny and enjoyable fantasy adventures that are faithful adaptations of their source material but suffer from being a little long and inconsistent.

The Color of Magic

The Color of Magic is based off of The Colour of Magic and The Light Fantastic books from the long running Discworld series. As the first ever tourist in Discworld, Twoflower arrives in Ankh-Morpork having no idea what he got himself into. Being a naive tourist he quickly gets into trouble. He soon meets Rincewind who has recently been kicked out of the local wizard university because he has failed to learn a single spell in over 40 years. Rincewind is forced into becoming Twoflower’s tour guide to make sure nothing happens to him as he explores the various “tourist” attractions that he wants to see on his vacation. This leads the pair to go on many perilous adventures. If this wasn’t enough Discworld approaches certain doom with Rincewind being the only person able to save it from destruction. Can the pair survive their “vacation” and ultimately save the world in time?

Due to not being highly familiar with the Discworld franchise I didn’t really know what to expect out of The Color of Magic. As a fan of fantasy and satirical humor it seemed right up my alley. The whole premise behind Discworld after all is that it is a flat world that sits on the back of four elephants who themselves sit on the back of a giant turtle that travels through space. This is compounded by the premise of a tourist exploring a magical fantasy world. Before I even watched it I knew it would be quite silly, but it also sounded pretty clever as well. Ultimately I enjoyed the mini-series even though it has some issues.

While watching The Color of Magic (as well as Hogfather) it gave me a strong feeling of The Hitchiker’s Guide to the Galaxy and other satirical sci-fi and fantasy stories. The comparison isn’t perfect but I think the two series share a lot in common including a similar style of humor. The Color of Magic should not be confused for a serious fantasy story. While it shares elements of your typical fantasy story, these are mostly present in order to make fun of your typical fantasy tropes. The story is just plain silly which becomes apparent really early as the mini-series doesn’t take itself too seriously. The mini-series is striving to be funny which it accomplishes quite a few times throughout its runtime. When it is on The Color of Magic can be hilarious. There were several times during the movie where I laughed out loud. There are some jokes that fell flat, but I would say most of them are pretty funny. The Color of Magic is enjoyable as it creates an engaging and unique adventure.

For the most part I thought the acting was good in both The Color of Magic and the Hogfather. While I thought some of the performances were better than others, I thought the acting was generally really good. This is partially due to the characters being so interesting. The wacky characters really make both of the mini-series. They work because they defy your expectations of typical fantasy story characters. For example wizards are usually wise and yet the wizards in these two mini-series are silly, kind of incompetent, and surprisingly homicidal. Additionally Death is an actual character in both mini-series and is actually one of the main characters in the Hogfather. The characters are quirky but the actors do a really good job bringing them to life.

While there was a lot of things that I liked about The Color of Magic, there is one issue that prevents the movie from being as good as it could have been. As a TV mini-series it is longer than your typical movie. The mini-series is 191 minutes long (the Blu-ray features the longer British version of both mini-series). While this allows the movie to go into more detail than a typical movie, it also leads to the movie dragging from time to time. Three hours is a long story to tell and it unfortunately leads to an uneven story. As I already mentioned when it is good, The Color of Magic is really good. The problem is that due to the longer length the movie feels like it has some filler in it. The mini-series already had to cut some of the adventures from the books (otherwise it is quite accurate to the books that it is based on), but I think it probably should have cut out even more. I think it could have been improved quite a bit by cutting out around a half an hour. You are ultimately left with a mini-series that has some really great moments but also has moments that can be quite boring.

The Hogfather is based on the Terry Pratchet book of the same name. Its almost time for Hogswatch (basically Discworld’s version of Christmas). Every year children eagerly await the arrival of the Hogfather (basically Santa) who leaves them gifts if they have been good. A mysterious organization wants the Hogfather out of the picture though and hires an assassin to carry out the plot. Its a couple days before Hogswatch and the Hogfather has gone missing. In addition to ruining Hogswatch for the children this puts the whole world in danger. As the world needs a Hogfather Death decides to take on the role while his granddaughter Susan tries to figure out what has happened. Can they succeed in saving the Hogfather in time to save Hogswatch?

I have to say that my opinion of Hogfather was actually very similar to The Color of Magic. As a matter of fact you can pretty much take everything that I said about The Color of Magic and apply it to the Hogfather as well. The movie is a clever twist on your typical Christmas story adding in fantasy elements as well as some satirical moments. When the mini-series finds its groove it can be quite funny. The humor is very similar to The Color of Magic where it feeds of its silliness. This can lead to some laugh out loud moments, but it will also lead to some jokes that fall flat. In addition to the humor the acting is quite good as well. Unfortunately with the highs also come the lows. The Hogfather has the same issues with it being too long just like The Color of Magic. The mini-series tends to drag at times where I think it could probably have been thirty or so minutes shorter.

As for which of the mini-series is better I have to give the nod to The Color of Magic. While the two mini-series share many of the same positives and negatives, the Hogfather seems to suffer from the negatives more often. While I enjoyed the Hogfather it was just not as enjoyable even though this might have a little to do with watching a Christmas-adjacent movie in January. I found it to drag quite a bit more as there were even more slow parts where some editing could have been used. There are good moments in the mini-series but they are spread out even further which ultimately drags it down. While I enjoyed both mini-series I preferred The Color of Magic as it features a more entertaining story and doesn’t have as many slow points.

Before wrapping up I want to quickly talk about the Blu-ray release itself. This review is based on the 2020 Mill Creek Entertainment Blu-ray release. The movie has had several releases in the past but this appears to be the first time the mini-series have been released on Blu-ray in the United States. As each mini-series is around three hours long unlike other combo packs each was placed on its own disc. This means that that the video quality didn’t have to be compressed. For the most part I thought the video quality was quite good especially for mini-series that are both over ten years old at this point. For decade old British mini-series I was genuinely surprised that the visuals were better than I expected. From the practical to special effects they are considerably better than you would typically expect from a mini-series that is over a decade old. Discworld looks really good and utilizes its own unique style. Outside of a full remaster I don’t think you could have asked for much more from the video quality of the Blu-ray. While the video quality is quite good the Blu-ray release does not feature any sort of special features. Some of the previous releases have included special features which are not included in the 2020 Mill Creek Entertainment release.

Ultimately I had mixed feelings about The Color of Magic and Hogfather. There are a lot of things that I really liked about them. They are silly satirical looks at your typical fantasy story. The worlds are interesting and they lead to an engaging story. The acting is quite good as well. To top it all off the mini-series can be laugh out loud at times. At their best both mini-series are great. The problem is that both mini-series are kind of inconsistent. The biggest problem with both is that they can drag on at times where it starts to just feel like filler. If they were cut down a little I think they would have been greatly improved.

For the most part I enjoyed both The Color of Magic and the Hogfather. If you aren’t really into fantasy or silly satirical movies that make fun of their own genres, I don’t think either mini-series will be for you. If you are a fan of the Discworld series or fantasy movies that aren’t too serious though I think you will enjoy The Color of Magic and the Hogfather and should pick up the Blu-ray.