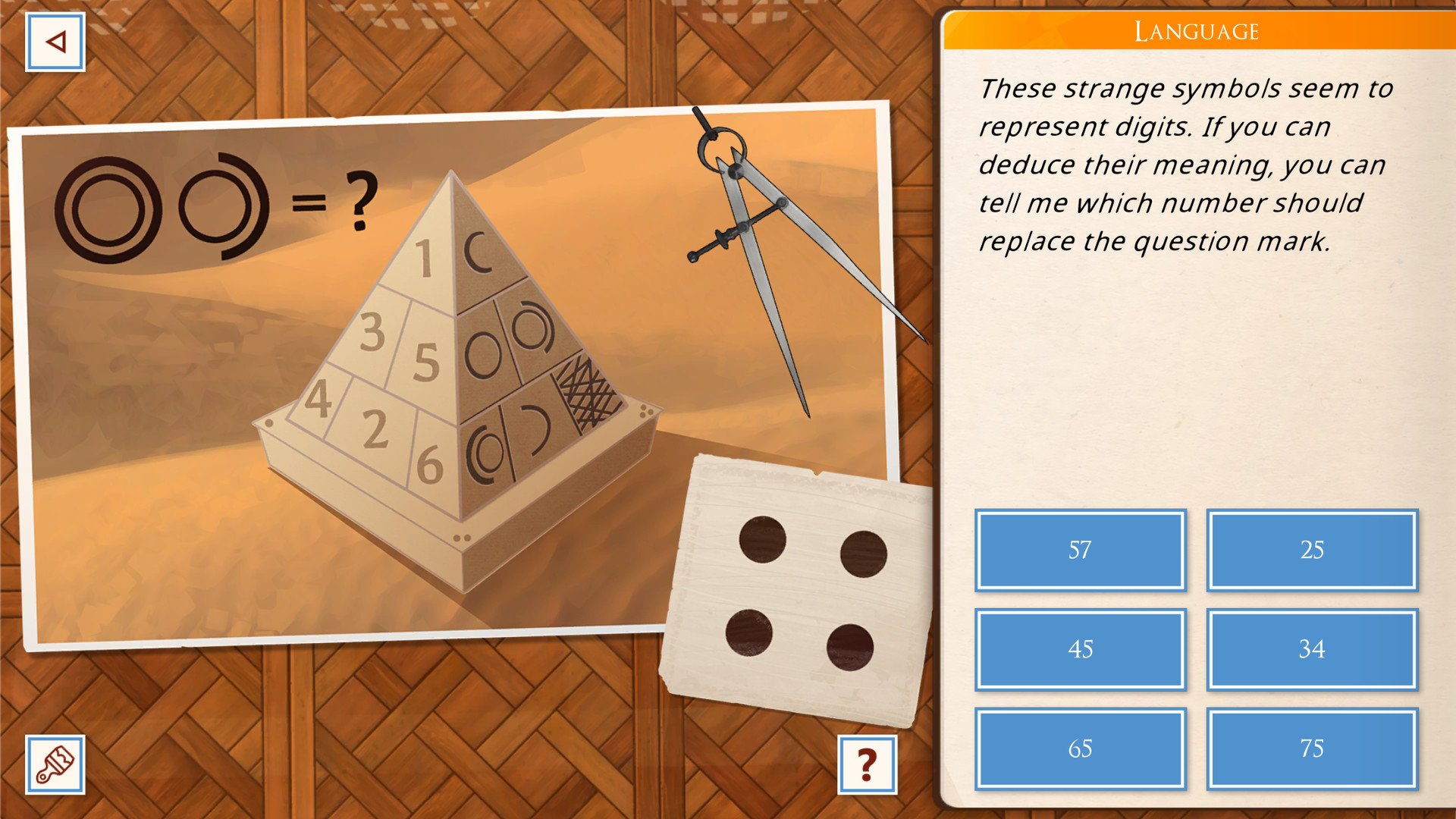 Today I am looking at The Academy: The First Riddle which was developed by Pine Studio who is known for the game SEUM: Speedrunners from Hell. While I had never played their previous game, I was intrigued by The Academy: The First Riddle because it genuinely looked like what you would get if you combined a game from the Professor Layton series with Harry Potter. There are obvious differences, but it is hard not to make this comparison as it is obvious that the developers took inspiration from these two sources. As a fan of both franchises I was curious to see how they would work together in a video game. The Academy: The First Riddle opens its doors to a fun filled puzzle adventure that successfully combines engaging puzzles similar to that of the Professor Layton series with an interesting Harry Potter inspired world to explore.

In The Academy: The First Riddle you play as Sam. The game begins as you receive a letter from the prestigious Academy which is a high school for academic elite. After taking your entrance exam you begin your four year journey at the school learning various academic disciplines from the best teachers. From the outside the school appears perfect, but the school has its own dark past and mysteries abound. The school’s history teacher has mysteriously gone missing and strange occurrences are happening all over the Academy. Can you and your friends figure out what is behind all of the mysterious occurrences and stop them before it is too late?

The simplest way to describe the gameplay in The Academy: The First Riddle is to say that it is very similar to the Professor Layton series. Those familiar with the series should already know what to expect. Basically the crux of the gameplay is based around a set of different types of puzzles. Throughout the game you will be presented with a ton of puzzles that you need to solve from the various classes you attend and to help your fellow classmates and teachers. The types of puzzles vary significantly from puzzles that test your observation skills, pattern recognition skills, math skills, riddles, logical thinking, among others. For each puzzle you are presented with a still image and you need to answer a question based on it. Using your logic skills and the couple tools that the game gives you, you will have to figure out the solution. The solution can either involve selecting the correct answer from a group of choices or placing a pin in the correct place on the picture. Once you have solved the basic puzzle you are then given the option to complete a more challenging puzzle using the same picture.

In addition to the puzzle solving mechanics the game also has a basic exploration mechanic. This is more of a supplementary mechanic as it mostly acts as a buffer between puzzles. The exploration mechanic allows you to move around the school pretty freely outside of certain rooms being closed until you need them for the story. The school itself is a decent size which is utilized for a search and find mechanic. Each day you are given a number of puzzles that deal with the main plot. There are additional puzzles throughout the school each day though that you don’t need to solve in order to progress the story. A lot of the exploration comes from finding these puzzles especially the daily hidden book challenge which can be pretty hard to find at times. Other than finding new puzzles you can pick up chocolate bars which can be used for hints, and you can find other secrets hidden throughout the school.

Thankfully the puzzles are where the game really flourishes. Some of the puzzles aren’t great (more on this soon), but I would say that a large majority of them are quite good. The puzzles in general are quite clever. The game does a really good job mixing in a bunch of different types of puzzles so if you encounter a type that you don’t really care for the next one will likely be quite a bit different. Some of the puzzles are pretty straightforward where you just have to figure out the puzzle’s logic. Many puzzles though have a trick to them. These puzzles will have an obvious solution that is in fact not the correct answer. The key to these puzzles is trying to figure out what that trick is. The puzzle design in general is really good where they challenge you enough that you feel smart when you figure them out, but they aren’t so difficult that they become frustrating.

While I would say that a large majority of the puzzles are really good, there are some duds. Most of the puzzles have just the right challenge, but some fall a little too far on either side of the spectrum. Some are really easy where I figured them out almost immediately and I almost second guessed myself as I thought there must be some trick that I missed. These puzzles aren’t bad, but I wish they were a little more challenging. The bigger problem are the puzzles that are on the other end of the spectrum. These puzzles aren’t necessary difficult, but their logic doesn’t always make a ton of sense. The difficult puzzles can usually be overcome by using one of your chocolates as the clues are usually pretty helpful without basically giving you the correct answer. For most of these puzzles the logic behind them didn’t make a lot of sense though so even the clues weren’t very helpful. I could somewhat see the solution when I finally figured them out, but they could have either been worded or designed slightly differently. Then there are the occasional puzzles where you have to point out a specific part of the picture for a solution. For some puzzles the acceptable area seems too small where you could have the right solution but didn’t place the pin quite right. I ended up missing answers just because I didn’t place the pin quite right. These dud puzzles don’t hurt the experience too much as they are far outnumbered by the good puzzles. They are mostly just frustrating as when you mess them up you will lower your overall score.

At the beginning of this review I mentioned that The Academy: The First Riddle reminded me a lot of Harry Potter. Now this comparison is not perfect as The Academy is not a school of magic. Instead it is based around technology and science. There are elements that seems more mystical in nature as certain elements of the story can’t be explained by science and technology. The story is much more grounded than the Harry Potter series though.

Despite this I thought the game still felt a lot like Harry Potter. Beginning with the acceptance letter to the school, the overall atmosphere and story takes a lot of inspiration from Harry Potter. In many ways it kind of feels like what would happen if you took the magic out of Harry Potter and replaced it with science and technology. The main three characters bare a lot of similarities to Harry, Ron and Hermione. The normal everyday hijinks and even the overall story have a similar flavor as well.

In a lot of ways I liked the story. The game’s overall atmosphere is unique and you want to see what happens. As the game takes place during your first year in a four year school, the game in many ways teases additional sequels. If that were to happen I would really like to see what the series could become. The story is good for the most part even though it can be a little cheesy at times. The overall character design and the Academy itself are pretty well designed. These elements are clearly not going to compare to a AAA studio, but I thought they were pretty good for an indie game. I wasn’t a huge fan of the game’s cutscenes though as it uses animated still images which feel similar to what you would expect from a visual novel.

As for the overall length I can’t give you a definitive length as I haven’t finished the game yet. The game takes place over a total of three chapters and has over 200 individual puzzles. At this point I would say that I am through most of the second chapter and have played the game for around ten hours. The length you get out of the game is going to somewhat depend on how you approach the game though. As a perfectionist I generally tried to be pretty sure that I had the correct answer instead of just making a guess. If you don’t care as much about always getting a correct answer on your first guess you could probably shave off some time. The length is also going to depend on which puzzles you decide to do and which you decide to skip. Between the optional puzzles and the more difficult version of each puzzle you can actually skip around half of the puzzles. If you do the bare minimum it will take considerably less time to finish the game. Finding and completing all of the optional puzzles though adds quite a bit of time to the game as the book puzzles sometimes take a decent amount of time to find. If you complete everything the game has to offer I think you could easily get at least 15 hours out of the game.

Heading into The Academy: The First Riddle I didn’t know exactly what to expect. You generally don’t see a lot of games in the Professor Layton genre/style where the gameplay is mostly based around solving a bunch of brain teasers/puzzles. The whole game is built around these puzzles though so it is a good thing that they are quite good for the most part. There is the occasional puzzle that is either too easy or the logic doesn’t make a lot of sense. A large majority of the puzzles are really good though as they are cleverly designed where you genuinely feel proud of yourself for solving them. The story seems to take a lot of inspiration from the Harry Potter series except for the magic part. The world and story are pretty good for the most part even though it can be a little cheesy at times. Ultimately the game is surprisingly long and is filled with a lot of fun puzzles that fans of the genre should love.

I would say that my recommendation for The Academy: The First Riddle mostly depends on your opinion of puzzle games similar to Professor Layton. If you don’t really care for that franchise or don’t really like these type of puzzles/brain teasers, the game won’t be for you. Fans of the Professor Layton series or these type of puzzle games in general should really enjoy the game though and should definitely consider picking it up.

The Academy: The First Riddle