When you first look at Texas Roll’Em, you probably think that it will be an average poker themed dice game. That generally wouldn’t interest me but Texas Roll’Em was created by Richard Borg, known for games such as Liar’s Dice, Memoir ’44, and BattleLore. Being made by a well recognized board game designer, I was interested to see what Texas Roll’Em was going to be like. After playing Texas Roll’Em it was not what I was expecting as it turned out to be quite reminiscent of one of Richard Borg’s most well known games.

Lay out the felt game mat. Each player takes a dice cup, four white poker dice, eight poker chips, and a player token. Five white dice (community dice) and the red dice are added to the game mat. The players take turns rolling a die. The first player to roll a star is the first dealer. Each player places one chip in the pot.

Each round begins with the players rolling their dice in their dice cup. Players look at what they rolled without letting the other players see their dice. The dealer rolls three of the community dice and places them in the corresponding spot on the play mat. Starting with the dealer, the players take turns making bids on the symbols rolled between the dice on the play mat and under everyone’s cups. Stars count as wilds for all of the other symbols. An example of a bid can be five kings. 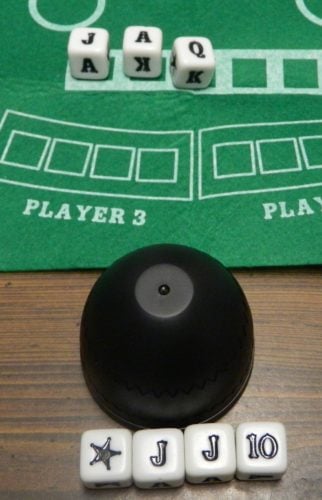 Based on the dice on the play mat and the dice rolled by this player, the player would probably want to bid at least four jacks and could bid even higher if they think the other players rolled jacks or stars.

After the first bid the other players have to raise the bid or call a bluff. Players can raise the bid in a couple different ways: 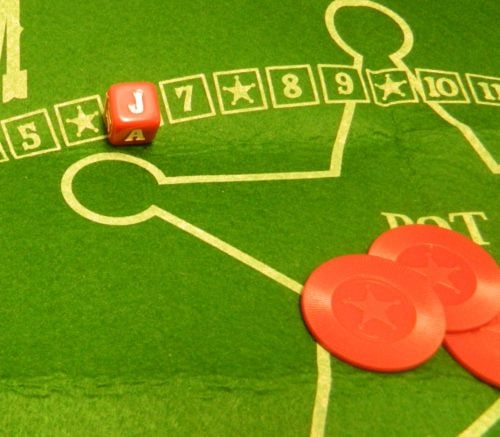 When a player thinks another player has bid too high, they call a bluff. After a bluff is called everyone reveals their dice and the final two community dice are rolled. There are three different possible outcomes.

After a round is resolved, the dealer chip moves to the next player and another round is played. 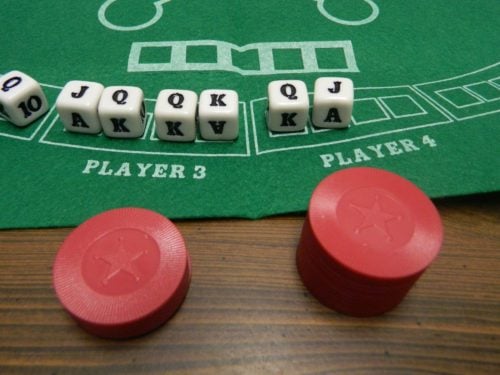 The last two remaining players were player 3 and 4. Player 3 lost their last dice so the two players compare their chips. Since player 4 has more chips, they win the game.

Even though Texas Roll’Em looks like a poker based dice game, the game has next to nothing to do with poker. As a matter of fact the game is very similar to a different dice game called Liar’s Dice that was also created by Richard Borg back in 1987. Liar’s Dice is a pretty popular dice game and it even won the Spiel Des Jahres back in 1993. If you had ever played Liar’s Dice before it should be pretty obvious that Texas Roll’Em borrows heavily from Liar’s Dice.

Liar’s Dice and Texas Roll’Em are a blend of a dice game and a bluffing game. Basically everyone rolls dice and makes bids based on how many of a certain symbol they believe were rolled. Since you can only see the dice you rolled (as well as the shared dice in Texas Roll’Em) each player only has partial information. Therefore you need to try and deduce what the other players rolled while also being able to bluff what you rolled on the turn. Liar’s Dice and Texas Roll’Em are fun dice games if you want a quick game that you don’t have to put a lot of thought into. The games rely heavily on luck though so if you don’t like luck they aren’t going to be for you.

Possibly the biggest impact luck has on the games is that the games actually have the opposite of a catch up mechanic. The players in first have an advantage over the other players and this advantage can lead to them getting even further ahead.  Since whenever you lose a round you lose a die, you know less information than the rest of the players. This means that the player in first has more information and thus can make a more educated guess. This makes it more likely for them to win future rounds. While this mechanic makes sense for the game, I have never loved it since it just makes it even harder to catch up if someone gets out to an early lead.

Another problem with Liar’s Dice/Texas Roll’Em is that players can easily get into no win situations. Most rounds end because a player gets backed into a corner. The previous player makes a reasonable bid and the player really can’t raise the bid without making a obvious bluff. The player ends up having to make a decision which will likely make them lose the round. This is a problem since there is really no way to avoid it and it almost always impacts players that have already fallen behind.

So far I have been referring to both Liar’s Dice and Texas Roll’Em interchangeably and that is because the games share so many things in common including the games’ designer, Richard Borg. While the two games share a lot in common there are a couple small differences between the two games.

First Liar’s Dice just uses normal dice with one wild side. Texas Roll’Em uses playing card symbols and a wild side. This change doesn’t really add anything to the game and just makes it more complicated than it needs to be.

Next the end game conditions are slightly different. In Liar’s Dice players are eliminated when they run out of dice. In Texas Roll’Em you can be eliminated by running out of dice or chips. I like and don’t like the idea of the chips. I like the chips because it punishes players more that either bid way too high or call a bluff that was far from a bluff. I don’t like the mechanic for a couple reasons though. First if you just have one bad round you can lose a majority of your chips and be eliminated. Also the chips don’t really add a whole lot to the game. There aren’t a lot of chips in the game and I don’t see many situations where the last player with dice won’t also be the player with the most chips. I think the chips are just another unnecessary mechanic in the game.

The poker chips did give me an idea for a house rule that could improve both Liar’s Dice and Texas Roll’Em. I think it would be interesting to play these games without losing dice each time you lose a round. Instead you could just use the poker chip rules from Texas Roll’Em. I think this house rule could improve the games because it would eliminate some of the problems where the leaders just keep getting stronger and the players who fall behind have little chance to catch up. If players didn’t lose their dice at the end of a round, all of the players would have an equal shot in each round. While this would change the games quite a bit, I wonder if it would make the games better.

Finally the last new mechanic added in Texas Roll’Em is the idea of community dice. In Liar’s Dice each player rolls their own dice and there are no dice that are shown to all of the players. I personally prefer the Texas Roll’Em rules. I like the community dice because they add a little more public information which evens out the luck of the roll a little and helps the players who have fallen behind. This is a mechanic that I would recommend adding to Liar’s Dice since all you would need to add is some additional six sided dice.

As far as component quality I would say the game is decent but is nothing special. The dice, chips, and dice cups are perfectly fine. They are pretty much what you would expect out of this type of game. The play mat is pretty bad though. The play mat is really not that necessary outside of marking players bets but it is just cheap. It is made out of pretty thin felt and doesn’t want to stay flat after it is folded in order to fit inside the box.

So after comparing the two games for most of this review, which one do I think is better? Overall I would say that I prefer Liar’s Dice but not by a lot. The main reason I prefer Liar’s Dice is that I felt that a lot of the mechanics added to Texas Roll’Em didn’t really add anything to the game and actually just made the game more complicated. At the same time though I liked the community dice which would be something that I would recommend using with Liar’s Dice. Honestly the two games are so similar that there really isn’t a clear favorite so if you already own one of the games I wouldn’t pick up the other.

If you don’t really like dice rolling games that rely a lot on luck, Texas Roll’Em is not going to be for you. Since the two games are almost identical, if you already own Liar’s Dice I really don’t see any reason to pick up Texas Roll’Em unless you can find it for a couple dollars. If you don’t own either game and they sound interesting to you, I would probably just recommend purchasing whichever game you can find for cheaper.

The Legend of Landlock Board Game Review and Rules
Click here to cancel reply.