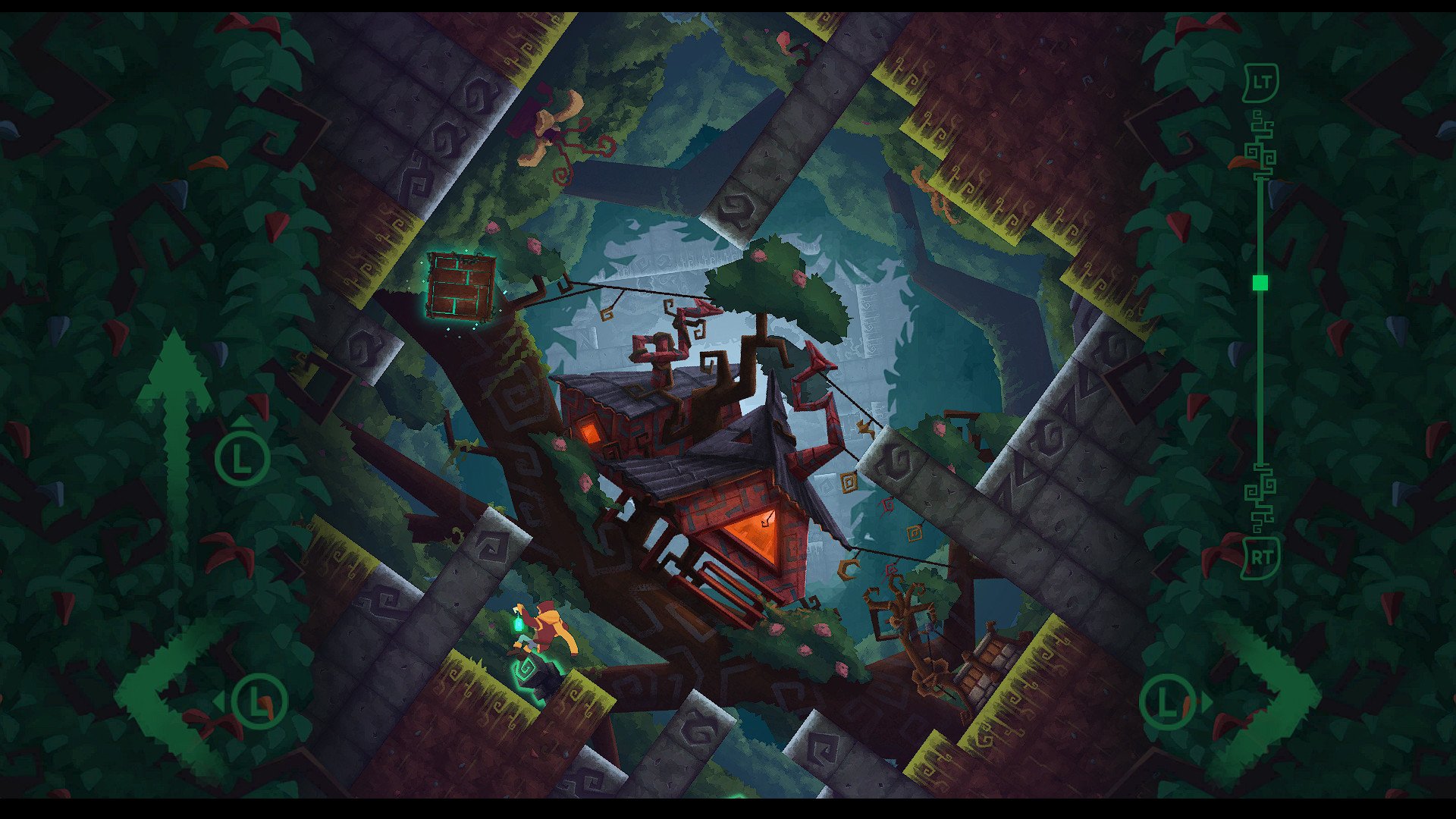 Being a huge fan of the puzzle genre, I generally like to try out most new games from the genre. This is especially true when they have a unique new mechanic that makes them stand out among other puzzle games. Released last week I was intrigued by the new puzzle game Tetragon as it featured the ability to rotate the game world as well as move different sections to create platforms and pathways. Tetragon is an interesting and challenging puzzle game that fans of the genre should enjoy.

In a parallel universe there is a world made of plane realities. These planes float around the sacred jewel, the TetraGen, and have been peaceful since the beginning of time. A mysterious dark energy started to grow in Tetragon though creating a creature that ends up fracturing the TetraGen. You play as Lucios whose his son has been captured by the creature and taken into the world of Tetragon. Can Lucios save his son and restore balance to Tetragon?

To its very core Tetragon is a puzzle game. The game is broken into levels with the ultimate objective of each being to reach the portal that takes you to the next level. Each of the levels are comprised of a grid. In the game you have the ability to move your character left and right as well as climb/jump up onto platforms on neighboring spaces.

This on its own might seem similar to many other puzzle games. Early in the game you acquire two abilities which are ultimately responsible for most of the puzzle mechanics. Throughout each of the levels there will be a number of towers that you can interact with. These towers can be raised or lowered to certain levels. This ability is used to create a path forward for your character. Additionally each level has a number of alters that you can interact with. These allow you to rotate the game world changing the direction of gravity which opens up new ways of moving around the level.

With how many different puzzle games that I have played in recent years, I was kind of curious to see how Tetragon would stand up. I was initially intrigued by the game as it seemed like it had some interesting mechanics for a puzzle game. In a way Tetragon feels similar to other puzzle games that I have played, and yet it feels different as well. There have been a number of video games that have allowed players to rotate the game world/change the gravity. Despite this I still think Tetragon feels like its own unique game. The ability to change the positioning of the towers in addition to rotating the world is the main reason why I think the game stands out. Basically you need to use these two mechanics in tandem in order to finish the puzzles. You will alter the towers in order to create platforms to climb or fall onto. You will then use the rotation mechanic to turn former obstacles into new platforms that you can walk on. These two mechanics actually work pretty well together as they compliment one another.

With all puzzle games, their success or failure ultimately comes down to the puzzle design. For the most part I thought the puzzle design was quite good. Some of the puzzles are more creative than others, but the game forces you to think of unorthodox ways of using the mechanics. There may be a few puzzles where you will immediately see the solution, but in most cases there is some trial and error as you figure out how to manipulate the positioning of the towers and the world itself. Generally I found the puzzle design to be pretty clever. When you are able to solve the puzzles you feel a sense of accomplishment as figuring out many of them requires some work. While the game adds a few additional mechanics as you progress, the game deserves credit for coming up with quite a few unique and entertaining puzzles mostly utilizing two pretty straightforward mechanics. If the game’s premise interests you at all and you are a puzzle game fan, you should enjoy your time trying to solve the puzzles.

With puzzle games being one of my favorite genres, it is sometimes hard for me to give an accurate diagnosis of a game’s difficulty. I personally would say that the difficulty of Tetragon can actually vary quite a bit. Some of the puzzles are quite straightforward where you can solve them within a couple minutes. As soon as I saw these levels it was pretty obvious what you needed to do to advance. Other levels can be quite difficult where you are stuck spending quite a bit of time trying to figure out the one thing that you are missing. I haven’t quite finished the game yet mostly because there is one level towards the end of the game that I can’t quite figure out. The difficulty of the levels seem to swing back and forth pretty regularly between these two extremes. You will likely encounter a couple of levels that are pretty easy, and then get stuck in a level that requires you to really think outside of the box. Ultimately I would say the game is moderately difficult. If you are looking for a really easy or hard puzzle game, the game may not be for you. If you don’t mind the spikes in difficulty, the game should hit the right level where it is accessible to new players and yet challenging enough to keep puzzles fans interested.

While the puzzles and gameplay are usually what I look for in a puzzle game, I did want to spend a little time talking about the atmosphere and story. For a puzzle game I actually thought Tetragon did a pretty good job in both areas. The story is pretty simple as it is mostly about trying to stop an evil threat to save your son. I give the game credit though as most similar puzzle games don’t even bother with a story. The story is interesting enough that I wanted to see how it would end. The game’s atmosphere is better than the story. I don’t know exactly how to describe the game’s visual style, but I think it works well for the game. Along with the audio/music, the game does a good job creating an engaging atmosphere. Many puzzle games that utilize a similar premise to Tetragon don’t even bother to really add a story and atmosphere, so it is refreshing that some effort was put into adding these elements.

Maybe I have become a little spoiled as a lot of puzzle games have started to implement a rewind feature, but this type of feature is sadly missing from Tetragon. This is a shame as the game could have benefited from having one. There were a number of times where I realized too late that I made a mistake while rotating the game world. If you don’t let go of the rotate button you can always reverse it, but once you let go you can’t go back. Few of the puzzles give you a way to reverse out your mistakes, so you are usually stuck having to replay the level from the beginning. Once you make a mistake you likely won’t make it again, but this gets a little frustrating after a while as in some levels it will require a number of moves to get back to the position from before the mistake. The lack of a rewind feature doesn’t ruin the game, but it could have prevented a decent amount of having to replay levels from the very beginning.

So I wouldn’t classify this as a huge issue for the game, but I did encounter a few bugs while playing Tetragon. I ended up playing the game on PlayStation 4 so I don’t know if these issues impact the other versions of the game. There was some occasional issues with the controls not working quite right. I am guessing a lot of these issues are due to my controller which suffers from some slight analog stick drift. Otherwise while playing the game there were a couple times where I suddenly couldn’t interact with the game at all forcing me to close the game and return to the PlayStation menu. Another time the game crashed. These were mostly just kind of annoying as outside of wasting some time getting back to where I was, I wouldn’t say that they broke the game.

As for the game’s length it is going to depend a lot on the individual player. The game features around 40 levels. The levels themselves aren’t particularly long. If you already know what you are supposed to do or can figure it out quickly, you could finish a level within just a couple of minutes. A decent number of the levels fit into this category. Then there are the puzzles that you can’t quite solve. These puzzles can take quite a bit of time to solve if you can’t figure out what you are missing. Thus how much time you get out of the game is really going to depend on how many of the levels fall into each of these categories for you. For this reason I can’t give a good estimate of the game’s length. On the low end I would say that the game will likely take at least four to five hours. On the high end it could take quite a bit longer if you struggle figuring out some of the puzzles.

For the most part Tetragon lived up to my expectations. The game is a puzzle game to its very core which means it likely won’t appeal to those that don’t really care for the genre. In some ways the game feels like your typical puzzle game, and yet in other ways it feels different. The game mostly succeeds because the core gameplay works really well. Between manipulating the layout of the world and the towers, the gameplay is pretty fun. This is supplemented by the fact that the puzzle design is good for the most part where you get a sense of accomplishment for finishing each level. The difficulty is a little up and down as some puzzles can be quite easy while others are really difficult. The game also has a few minor bugs and I really wish it had a rewind feature.

Basically my recommendation for the game comes down to your thoughts on puzzle games in general and Tetragon’s main mechanics. If you generally don’t like puzzle games or don’t like the idea of twisting and turning the game world, I don’t think the game will be for you. Fans of the genre that have at least a passing interest in Tetragon’s premise though should enjoy it and consider picking it up.