At first glance Terzetto probably doesn’t jump out to a lot of people. The game doesn’t have a flashy box but I decided to pick it up at the thrift store because it looked like it had some interesting ideas. I have played a lot of different board games and yet I can’t think of any board game that played quite like Terzetto. Terzetto has some interesting ideas which make for a solid but kind of forgettable board game.

How to Play Terzetto

Each player grabs a gameboard and three marbles of each color (24 total). The first player to name a popular trio starts the game.

To begin your turn shake the shaker. Look at the pattern of the marbles in the shaker. You will place three marbles (of the same color) on your gameboard in the same pattern shown in the shaker. The shaker can be turned in any direction so you can see all four different ways you can arrange the marbles. After placing the marbles, play passes to the other player. 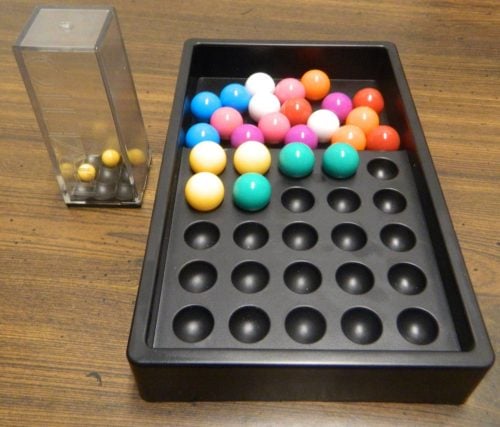 For this round the player has rolled the pattern shown in the shaker. They used the pattern to add the green marbles to the board.

If a player cannot find any area on their gameboard where they can match the pattern, they pass their turn without placing any marbles.

If a player is able to place all of their marbles on their gameboard, they automatically win the game. 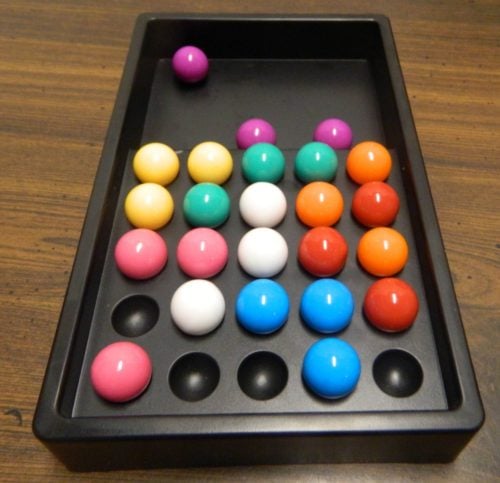 Terzetto Trio is a set of alternate rules that you can use to play the game. Just like in the normal game players take turns shaking the shaker and placing marbles based on the pattern shown in the shaker. Instead of using marbles of the same color each turn, you will use one marble of three different colors. 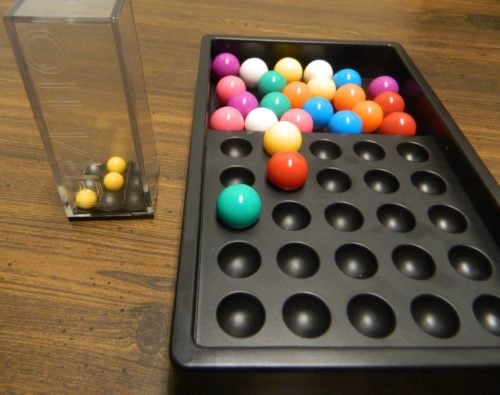 The player has shaken the shaker for the current round. The player chooses a different color for each part of the pattern in the shaker. 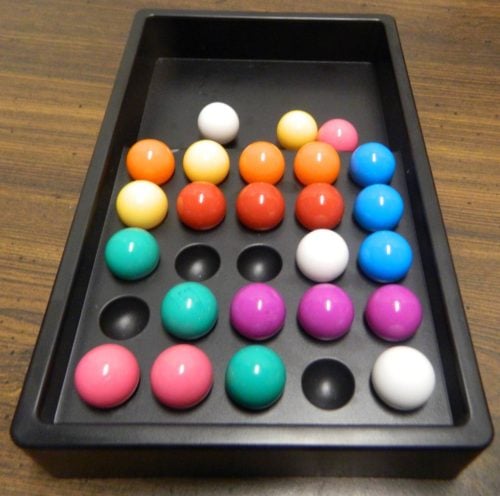 At the end of the round this player has created four sets of three: blue, red, purple, and green.

My Thoughts on Terzetto

Before playing Terzetto I was intrigued because the game’s mechanics sounded interesting. I have played hundreds of different board games and yet I have never played a game quite like Terzetto. I think the easiest way of describing Terzetto is to call it a spatial abstract strategy game. You shake a shaker which has three balls inside. You use the location of those three balls in relation to one another to determine where you can play marbles on your gameboard. The goal of the game is to arrange the marbles in a way where you can play more of your marbles to your board than your opponent can.

With so few mechanics in the game, it is not a surprise that Terzetto is a really easy game to learn and play. It should only take minutes to explain the game to new players. With how easy it is to play, Terzetto is a game that could work well with children or adults that don’t play a lot of board games. The game has a recommended age of 8+ but I think children younger than that won’t have too much trouble with Terzetto.

On the strategy spectrum I would classify Terzetto as a light game. The only decisions you can make in the game is figuring out how you are going to use the patterns you shake. I am unsure if there really is much of a strategy that you can follow in the game. The only obvious strategy is that you need to avoid isolating an empty space to the point where you can’t fill it in. Otherwise you have no idea what you are going to roll on a future turn so you just have to kind of guess what the best move would be for any given turn. My strategy was trying to fill in empty spaces whenever possible. I tried filling in one section of the board before moving onto the next section.

While the base game doesn’t have a lot of strategy, I think the alternate game, Terzetto Trio, has a little more strategy. Terzetto Trio has a little more strategy since you have to plan a couple turns in advance. The goal of Terzetto Trio is to get three marbles of the same color together despite only being able to play one marble of each color each turn. Terzetto Trio is not significantly more strategic than the base game but I think it adds more decision making into the game. You need a strategy for how you are going to try and play the marbles or you will probably run into trouble. Unless you get really lucky you will eventually have to decide which colors to sacrifice in order to give you more chances to match the other colors. While this mode seems to rely a little more on luck than the normal game, I think I prefer it slightly.

There is a little strategy in Terzetto but the game seems to rely more on luck. The key to doing well in Terzetto is to roll the right pattern at the right time. No matter what strategy you have, if you don’t roll the right patterns you will never be able to implement it. Based on my experience it seems beneficial rolling patterns where the balls are next to one another. These patterns seem to work well since they give you more flexibility in future turns. Towards the end of the game though you basically have to roll an exact combination if you want a chance of being able to play all of your marbles.

Usually I would hate that there is such a high reliance on luck but it is not that big of an issue because the game is so short. I would estimate that most games of Terzetto will only take around 10 minutes. At 10 minutes Terzetto is the perfect length for a filler game. At only 10 minutes you can’t be that upset losing a game due to luck. If you have bad luck in one game you can just play another game and will hopefully have better luck in that game.

I would say that Terzetto is a game that you can play without having to put too much thought into. The game will work pretty well if you are looking for a quick game where you don’t have to think too long or hard. You basically just play the game and see who wins. There really is no reason to put too much thought into any move. If you have to analyze every possible move to maximize your chance of winning, Terzetto is probably not going to be the game for you.

The biggest issue that I had with Terzetto is that it is just kind of a boring board game. All you do in the game is shake the shaker and then figure out how you are going to use the pattern to put marbles onto your gameboard. This wouldn’t be so bad except that the decisions you make on any given turn are either quite obvious or just random guesses. This doesn’t make Terzetto a bad game but it does lead to it being kind of dull.

Should You Buy Terzetto?

Terzetto is an interesting game. The game has quite a bit going for it and yet is nothing more than a very average game. The game’s mechanics are pretty interesting and unique. It is quick and easy to play which lets you play the game without having to put too much thought into a strategy. Terzetto does rely quite a bit on luck though. The biggest problem though is that the game is just kind of boring.

If the game’s concept doesn’t sound that interesting to you, I don’t think Terzetto is going to be for you. While the game is a little boring at times, if you are looking for a simple game that you don’t have to put too much thought into it may appeal to you. I would only recommend picking it up though if you can get a good deal on it.

If you would like to purchase Terzetto you can find it online: Amazon