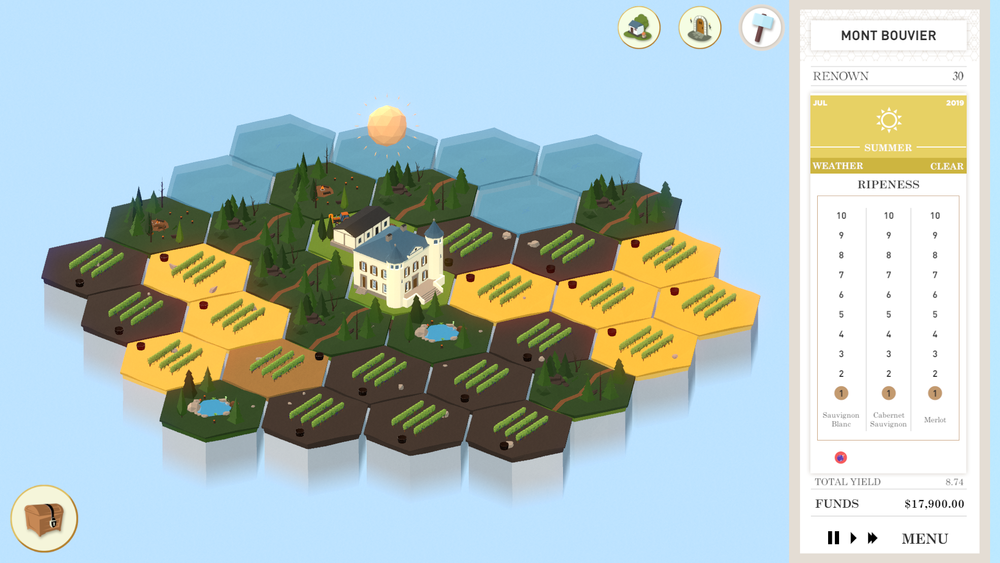 Have you ever wanted to run your own winery? Terroir is a simulation tycoon game that tasks you with creating the best winery that you can.

In the game your winery consists of tiles which can be used to plant grapes or provide various benefits to your winery. At the beginning of the game you only start with a couple tiles but as your winery becomes more profitable you can expand your winery. Players can choose which grapes they would like to plant and then they control the whole process from growing the grapes to turning them into wine. During the growing seasons you need to keep an eye on the weather while keeping the foliage in check and preventing bugs and disease from ruining your crops. This is done in real time so you need to monitor and click on your fields to trim the foliage and spray to get rid of bugs and disease.

After the growing season has ended you will then begin the process of creating your wine. You will craft your wine through crushing, fermentation, pressing and ageing. These processes are menu based and allow you to craft the four elements of your wine how you see fit. This portion of the game is critical as the quality and value of your wine will depend significantly on getting the right mix of these four different elements. After crafting your wine you can get it rated, sell it for a profit, and even submit it to try and win some awards. You then repeat the process every year for 60 years trying to avoid bankruptcy and maximize your score.

Before I get into the rest of the review I would like to point out to everyone that the theme of Terroir didn’t really appeal to me when I first started playing the game. I am not a fan of wine and knew next to nothing about the wine making process. Honestly the main reason why I decided to try out Terroir is the fact that I love simulation/tycoon games. There is just something about tycoon games that really appeals to me. While the theme didn’t really appeal to me at first I have to say that Terroir overcame that obstacle to still be an enjoyable experience.

While this might be somewhat due to the fact that I knew next to nothing about the wine making industry, I would like to warn people that Terroir has a learning curve. None of the mechanics are that difficult but you might be lost if you don’t go through the tutorial before playing the game. This is especially true for people that don’t know the wine making industry since if I hadn’t looked at the tutorial before playing the game I would have had no idea what I was doing.

In addition to learning how to play the game, there is a big trial and error element to the game. Unless you are a wine expert you are probably going to have next to no idea on how to create a good wine in the game. Unless you look at a guide/walkthrough you basically have to guess at the ideal levels of the different elements for each type of wine. You will likely fail more often than you succeed early in the game. It would not surprise me if most people go bankrupt within a couple years. In my first game I went bankrupt within three or four years. The key is to find the right combination of elements for each type of wine to create a five star wine. This requires quite a bit of trial and error as you try different combinations. You likely will struggle until you find your first five star wine combination.

Once you have created that first five star wine though things begin to change in the game. Once you have one of the five star wine combinations you can repeat the process each year in order to create high value wine which will let you start turning a profit. You can then use some of this money to start figuring out the ideal combination for the rest of the wines. While I kind of lucked into finding the combination for my first five star wine, I have to say that it was kind of satisfying since it then makes it a lot easier to start growing your winery.

As far as the gameplay you basically get what you would expect out of a simulation/tycoon game. You spend a decent amount of the game looking through different menus as you try to create good wines and become as profitable as possible. Since I have always liked these kind of games, I actually liked this part of the game. I will say though that people that don’t like tycoon games are probably going to find this part of the game to be kind of boring.

Other than managing the behind the scenes elements of your winery, the other main gameplay mechanics involve monitoring your fields during the growing seasons. For the most part you are keeping track of the ripeness of your different types of grapes while also making sure that they aren’t affected by bugs or disease. This mostly involves you occasionally trimming the foliage around your grapes to make sure they get enough sun while also avoiding getting too much sun that they get too ripe. Your goal is to get the ripeness of your grapes as close to five as you can by the end of the growing season. This gives you better elements to work with when you start going through the wine making process and also leads to more grapes being produced. While these mechanics are quite simple I had fun with them. Figuring out how to get the right ripeness takes some time but once you figure it out the process becomes much easier.

While I liked the mechanics in Terroir I kind of wish they were a little deeper. Once you learn all of the game’s mechanics you mostly end up repeating the same mechanics as you continue to grow your winery. I just wish there was more to do in the game than just growing your grapes, turning them into wine, and then selling them. I fear that the game will get a little repetitive after a while.

While I enjoyed my time with Terroir I am a little concerned about longevity. Probably the most enjoyable part of the game is figuring out the right formula to make the best wine for each type of grape and then selling your wine to make your winery profitable. I can see the game remaining enjoyable as you try to master each type of grape. The potential problem I see for the game is I think the game might get a little repetitive after you know the ideal combination for each type of grape. You will then know what to do to make the best wines and it then becomes a process of just trying to maximize your score. Once you know how to make the best version of each type of wine the business aspect of the game isn’t going to really matter as you are going to be swimming in money. While I can see some people enjoying chasing higher and higher scores, I think it will get kind of repetitive after you have already created a very successful winery.

One last thing I wanted to bring up before wrapping up the review is the game’s graphics. While Terroir uses a minimalist graphical style I actually think it really works well for the game. The graphical style does a really good job supporting the laid back feeling of the game. When you add in the game’s soundtrack Terroir is a game that you can just lay back and enjoy without having to worry too much about how well you are doing.

As I mentioned earlier, coming into Terroir I was only really interested in the game because I am a big fan of tycoon games. I had no interest in wine or wine making. While the game didn’t suddenly make me interested in either topic I have to give the game a lot of credit for creating an enjoyable experience out of a topic that I really didn’t have any interest in. Terroir does have a learning curve especially for people who don’t know the wine making business but if you give the game time you can have fun with it. The mechanics are pretty simple and it is just satisfying making five star wines and running a successful winery. I do wish the tycoon aspect of the game was a little deeper and I fear that the game will get a little repetitive. I have to give Terroir credit though since it truly surprised me.

If you don’t really have an interest in wine/wine making and also don’t care for tycoon games I don’t think Terroir is going to be for you. If you are really into wine and like tycoon games I think you will really enjoy Terroir and should pick it up. For those of you like me who don’t care about wine but like tycoon games it is a little more complicated. If the topic doesn’t really appeal to you I might wait for a sale but I would recommend giving Terroir a chance because it can appeal to people who otherwise could care less about the theme.