Just looking at the box for the 1970 Kohner board game Tension you would assume that it is one of the most tense board games ever made. The kids in the front look extremely nervous like playing the correct disc is a life or death proposition. Meanwhile it looks like the mother is trying to tackle the father in order to prevent him from taking the final space on the game board. Tension tries to turn the classic game of musical chairs into a board game but ends up creating a generic speed game that is past its prime.

How to Play Tension

Tension is played in rounds. Each round begins with one of the players spinning the Spin-O-Matic in the middle of the gameboard. When it stops spinning it will rest on one color. The color that is showing is the color for that round.

Players will race to play one of their discs of the color spun onto one of the corresponding colored spaces on the gameboard. A player cannot touch a disc before the Spin-O-Matic stops and a player cannot hold more than one disc in their hand at a time. If a player breaks either rule they will be given one disc from every other player. 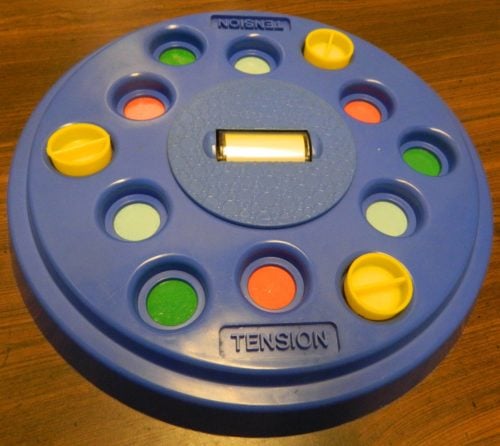 Yellow was spun so each player has to play a yellow disc. The player who didn’t play a disc will take the three yellow discs that were played.

If a player has no discs of the color that was spun, they can place any of their discs on one of the spaces corresponding to the color spun. If a player has a disc that matches the color spun though and the don’t play it, they will automatically lose the round and take the discs played by the other players. 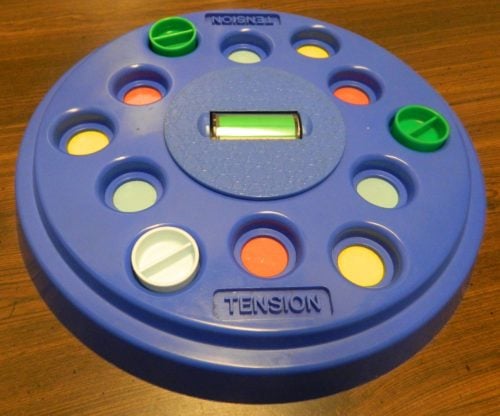 One of the players no longer had a green disc so they played one of their light blue discs.

The first player to get rid of all of their discs wins the game.

My Thoughts on Tension

To get right to the point, Tension is one of the most generic speed games that I have ever played. Basically all you do in the game is spin the spinner and then try to play a disc of the spun color as quickly as possible. If you are one of the first players to play your disc, you get rid of the disc while the slowest player has to take all of the played discs. The first player to get rid of all of their discs wins the game. That basically wraps up the entire game. When you think about it Tension kind of feels like a board game version of musical chairs. Everyone races to claim one of the spots (chairs) on the gameboard and one player is left without a spot (chair) to put one of their discs.

With so few mechanics it is not surprising that Tension is a game that you can can teach to new players quickly. I honestly think you could easily teach the game to new players within a minute. The game has a recommended age of 6+ and that seems right. I could see children younger than six being able to play the game but I don’t know if they would be very good at it. Generally I would say that Tension is probably better for children than adults. In addition to being quick to learn, Tension is also quick to play. I see most games taking less than ten minutes to complete.

Being a pure speed game, Tension is a game that some people are going to be great at while others are going to be terrible. Since the game relies entirely on speed, the player(s) that are best at speed games are always going to win. Meanwhile players who struggle with these type of games are rarely if ever going to win. Unless all of the players are about equally skilled in speed games, this kind of leads to a boring game where one or two players are always going to win while the other players have no chance of winning.

While Tension supports between two and four players I would say the game plays best with four players. With more players there is more competition for the spaces which drives the game’s action. The speed/action is the best thing about Tension so it is more exciting competing against three players rather than one or two. I am not a huge fan of the three player game because there is no way to make the gameboard fair for all of the players. You can spread out which spaces you cover up but each player is still going to have some colors that they are going to have a harder time placing a disc in. We evenly spread out the covered spaces and yet each player had at least one color that they had to reach across the board in order to place one of their discs. If one card is spun more than the others, this player is going to have a disadvantage in the game. While I actually think it would be interesting playing two discs each turn, the two player game is lacking the competitive nature of the four player game.

Tension’s components are pretty basic for the most part. You get the gameboard and some different colored discs. None of the components are much to look at but they serve their purpose. The components are made of thick enough plastic that you don’t have to worry about them breaking. The Spin-O-Matic doesn’t spin as well as I would have preferred though. If you actually want it to spin for a while you have to really spin it or spin it multiple times. This isn’t that big of deal but may put the player spinning at a slight disadvantage if it stops spinning before the player gets their hand back to their discs.

At the end of the day Tension is just an extremely average game. There is nothing terribly wrong with the game but it also doesn’t really do anything original either. It is pretty much the most basic speed game that you could ever find. You can have some fun with the game but it is a game that hasn’t aged particularly well. The game is fine as a very basic speed game but there have been many better speed games created since Tension was released. Designers have found ways to improve on everything that Tension has to offer where I don’t know if it really pays to play what is now an inferior speed game. Tension is an example of a game that is past its prime.

Should You Buy Tension?

Tension is a decent game that is just past its time. The game is quick to pick up and play. If you like speed games you can have some fun with it. If you don’t really care for speed games it is not going to be for you. The biggest problem with Tension is that it is a very generic game. It has just the one basic mechanic and that is all there is to the game. It gets repetitive quickly and is an example of a game that hasn’t aged that well. Since it was released there have been many better speed games released which have improved upon everything that Tension offers.

If you don’t like speed games you most likely won’t enjoy playing Tension as it doesn’t bring anything new to the genre. If you really like pure speed games though I think you can have some fun with Tension. I would probably only recommend picking it up if you can find it for cheap though because there are better speed games out there.

If you would like to purchase Tension you can find it online: Amazon