Dating back to the late 1800s Tiddledy Winks is one of the oldest children’s games that are still in publication to this day. It makes some sense as the game basically involves shoots discs at a target. While Tiddledy Winks is a game that was popular in its day, it is not nearly as popular as it once was. With how simple the game’s concept is though, it shouldn’t surprise anyone that some companies have tried to improve on the original game. That is exactly what Whitman tried to do in 1962 when it created Teeter Flips. Teeter Flips took the basic concept of launching discs at a target and included a launcher. Teeter Flips is a simple little dexterity game that you can have some fun with but that enjoyment does not last that long.

How to Play Teeter Flips

On a player’s turn they place one of their discs in the rounded groove on their teeter. They aim their teeter towards the gameboard. The player then places one finger on the disc while they use their other hand to press down on the front of the teeter. When the player is ready to shoot they release the finger from the back of the teeter which will launch the disc into the air. 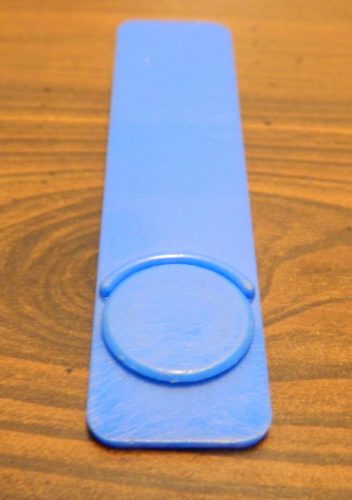 The next player clockwise will then shoot a disc. The players take turns shooting discs until all of the players have shot all four of their discs.

The players then total up their points. Each disc scores points based on what section it landed in. Discs that bounce out of the gameboard or don’t land on the gameboard are worth zero points. Each player then takes back their discs and another round is played. 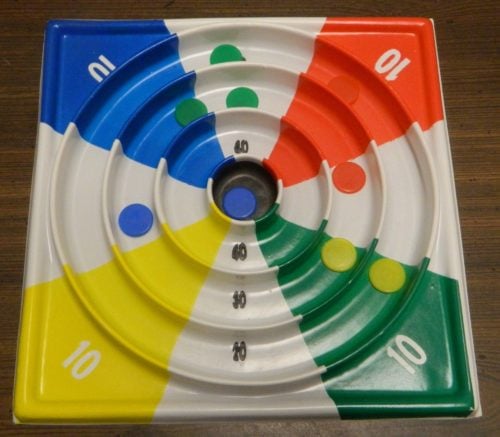 The players will play a total of seven rounds in the game.

The player that has scored the most total points in seven rounds wins the game.

My Thoughts on Teeter Flips

Teeter Flips is the type of game where you get what you see. The whole game involves using the catapults to shoot your discs towards the gameboard trying to score as many points as possible. With the game being so simple you can explain the game to new players in less than a minute. Kids shouldn’t have any trouble playing the game. The only reason that I would put any recommended age on the game is that younger children might put the pieces in their mouth and choke on them. Otherwise I see no reason why the whole family can’t play Teeter Flips.

Despite Teeter Flips being really simple I had some fun playing the game. There is just something fun about launching the discs in the game. I was actually surprised by how far the launchers can shoot the discs if you use the strategy suggested by the instructions. Teeter Flips is just one of those games that are simple silly fun. While Teeter Flips has you play seven rounds (a random number of rounds in my opinion) the game still plays really quick. You can easily play the entire game within 10-15 minutes. If the idea of using a launcher to shoot discs at a gameboard sounds interesting to you, I think you can have some fun with Teeter Flips.

The problem is that your enjoyment with the game may be short lived. Due to how simple Teeter Flips is, it gets repetitive pretty quickly. Basically after playing a couple games you are going to be ready to put the game away for another day. I see Teeter Flips as the type of game that I would maybe play for 20-30 minutes a couple times a year and then not think about again until I bring it out again. The game is a fine dexterity game but is nothing special where you will be itching to play it again soon.

I think Teeter Flips gets repetitive kind of quickly because I don’t think the game involves a lot of skill. Most of the skill in the game comes from aiming and applying the right amount of pressure to the launcher. Otherwise there isn’t a lot you can do to improve your odds in the game. Generally there would be a decent amount of skill to aiming and applying the right amount of pressure but I think the components let the game down in this area. While I could see players developing some skill after a while, the game will still rely pretty heavily on luck due to the launchers not being that accurate. Two shots aimed the same with the same amount of pressure are regularly going to give you different results. Since there is so much variability on how the discs will fly through the air, it seems kind of random where the discs will end up. Basically all you can do is aim in the general area of the gameboard and apply the right amount of pressure and hope that leads to you scoring some points.

Due to the reliance on luck, players don’t seem to score as many points as I would have expected. Maybe after playing the game a lot players will consistently get discs in the gameboard but without a lot of practice players will miss the gameboard more often than you would think. I would say that most of the players in the game I played only got one or two discs onto the gameboard each round. I see this as both a negative and a positive. The problem is that it is much more exciting to score points than to keep missing the board. With players regularly missing the gameboard though, every player is in the game until the very end since a player can easily go from last to first in one round.

Despite Teeter Flips being made in 1962 I still have to say that I was not impressed with the game’s components. The problem is that the components just look and feel kind of cheap. The launchers and discs are made of thick enough plastic that they should withstand extended play. The problem is that the gameboard is not very good. It is made of some of the thinnest plastic that I have ever seen in my life. I could see players easily ripping the gameboard. The gameboard doesn’t even look that nice since it has very basic artwork and some of the numbers aren’t even that easy to read due to the printing.

Should You Buy Teeter Flips?

Teeter Flips is a very basic game. It is basically Tiddledy Winks if you used a lever/seesaw to launch the discs instead of using another disc. This slightly improves Tiddledy Winks but it doesn’t change the game much. Teeter Flips is still a game where you basically just shoot discs at a gameboard. You can have some mindless fun with the game but it gets repetitive after a while where you will probably only want to play it for 15-30 minutes at a time. The game involves a little skill but the component quality tends to make the game rely on a lot of luck since the launchers aren’t very accurate. The gameboard is also really cheaply made.

If you would like to purchase Teeter Flips you can find it online: Amazon