Seeing as I am a board game collector and an avid thrift store/garage sale shopper, I have seen a lot of board games. Most board games are packaged in a pretty generic box. There are some board games that strive to stand out though by utilizing more non-traditional packaging. That was the first thought that came to my mind when I saw Tastes Like Chicken. I have seen weird packaging in the past and yet I had never seen something like a game being packaged in a ketchup bottle. I had no idea what Tastes Like Chicken would play like, but due to the weird packaging and the fact that it was like $0.20 it was hard to pass up. Tastes Like Chicken is a quirky re-themed UNO style game that may appeal to younger families but no one else. 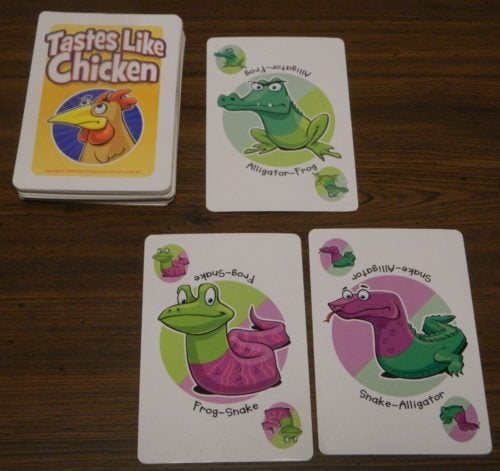 The top card on the discard pile right now is an Alligator Frog. The next player has to either play an alligator or a frog card.

If you don’t have any cards in your hand that you can play you must say “Tastes like ______” and fill in the blank with something you think would taste terrible. You will then draw the top card from the draw pile. If you can play the card that you just drew you will play it to the discard pile like a normal card.

Whether you can or can’t play a card, play will then pass to the next player clockwise.

When playing cards there are a couple special cards that allow you to take a special action.

Whenever a card that features part of a chicken is played the player has to say “Tastes Like Chicken”. The next player (the player to their left) will then have to draw a card from the draw pile and they will lose their next turn. 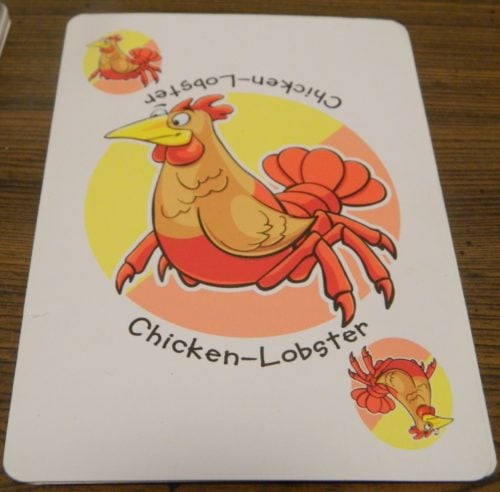 When a player plays this card the next player will have to draw a card and lose their next turn.

If you play a card that has part of a pig on it you must say “Tastes Like Pig”. You then have the opportunity to immediately play another card. This second card does not have to match the previously played card in any way. If you play a part chicken or pig card as your second card, you don’t get to take advantage of its special ability. 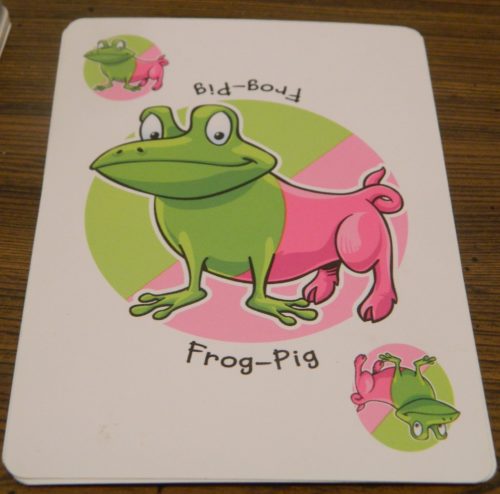 The last card played was a pig card. The player who played the card will get to play another card of any type.

Finally the Wild Rooster cards act as wilds. You can play them on top of any other card. When you play a Wild Rooster card you will choose what animal card the next player must play. The order of play will then reverse from clockwise to counterclockwise and vice versa. 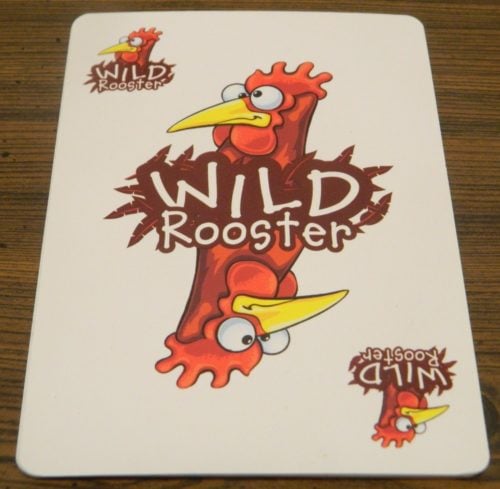 The last player played a Wild Rooster card. The player who played the card will choose what animal the next player will have to play.

The first player to get rid of all of the cards from their hand wins the game.

Regular readers of Geeky Hobbies will know that I have always been a fan of UNO. UNO is far from a perfect game, but there is something satisfying about the game’s simplicity. The game’s simplicity means that it is a game that you can somewhat shut your brain off while playing as you don’t have to put too much thought into what you are doing at any given time. Despite being a fan of UNO, I never could really get into Tastes Like Chicken. I think the main problem with Tastes Like Chicken is that it was built around being for families with younger children. This means that the game was simplified even more than UNO.

A lot of the simplification of Tastes Like Chicken comes from the distribution of the cards. In UNO the game comes with cards numbered 0-9 in four different colors. In Tastes Like Chicken you can only match cards by the type of animal. The game has nine animals and a wild card. As each card has two animals on it you can match either animal when playing a card. I am guessing this was done to simplify the game as you don’t have to factor in two different things when trying to create a match. This makes Tastes Like Chicken easier to play than UNO, but it also makes it less enjoyable.

The biggest problem with the simplification is that it eliminates almost all of the strategy from UNO. I am well aware that UNO has little strategy itself, but there are a few things that you can do to increase the odds that you will be able to play a card on your next turn. For example if you play a card with a number or color that matches another card in your hand, there is a slightly better chance that the other players will follow your lead allowing you to play another card of the same color or number on your next turn. This isn’t really applicable in Tastes Like Chicken as the animals on the last played card will regularly change. This means that there really isn’t any strategy to playing cards in Tastes Like Chicken. Basically you should just find a card that you can play and play it.

Another problem that I had with Tastes Like Chicken is that outside of card distribution the game didn’t even bother to really change the gameplay from UNO. UNO itself is not super original as it borrows heavily from Crazy Eights. I think Tastes Like Chicken borrows even more from UNO though. Anyone who has ever played UNO or Crazy Eights before should have a good idea of what to expect from Tastes Like Chicken as it does little to distinguish itself.

The one area where Tastes Like Chicken could have distinguished itself was with the special cards. It barely differentiates itself in this area either. Basically the chicken cards are draw two cards from UNO except you only have to draw one card. The wild rooster cards are basically a combination of a wild and a reverse card. The only somewhat unique cards are the pig cards. The pig cards are unique as they let you immediately play a second card even if it doesn’t match the previously played card. Thus the pig cards make it much easier to get rid of your cards as they let you get rid of a second card of any type. Pig cards are considerably harder to play than other cards though as it will be hard to match the pig side of the card. When a player plays their second card they are unlikely to play another pig card because they won’t get the benefit from the card. Thus to play a pig card you will usually have to match the other animal on the card.

While Tastes Like Chicken won’t really appeal to adults, I could see the game potentially working with younger children. The game should be easier to play for younger children. The game has less special cards and players only have to worry about matching animals. This means you can teach the game in about a minute and most games should only take five to fifteen minutes. I could see the theme also really appealing to some children. The theme of weird animal hybrids is definitely strange, but there is something about it that I think could really appeal to children.

Speaking of the weird creatures I have some mixed feelings about Tastes Likes Chicken’s components. I found the artwork to be both good and bad. Some of the creature combinations are just so freaky looking. I can see children really liking the art style though. The artwork is okay but I think the game should have found some way to note the special abilities on the cards that they apply to. Otherwise the cards are larger than your typical card game. This was most likely done with younger children in mind so they would be easier to hold. I personally am not a huge fan of the larger sized cards as it makes it hard to see all of your cards if you have quite a few in your hand. Finally I kind of liked the quirky ketchup bottle case. The plastic is solid so it should protect the cards pretty well.

If you don’t have any young children to play the game with I see no reason to pick up Tastes Like Chicken as you are better off just sticking with UNO. If you have younger children who would find the premise interesting though, they could get some enjoyment out of Tastes Like Chicken.