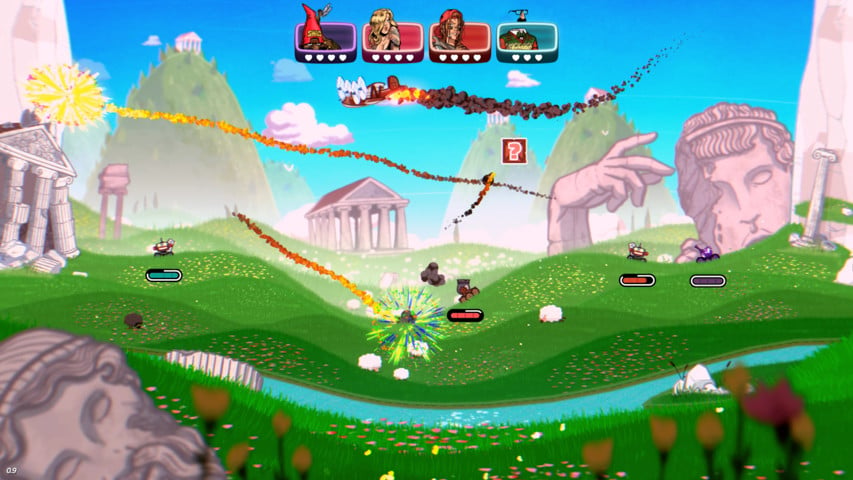 Growing up I was a pretty big fan of the Worms franchise. For those of you who are not familiar with the Worms franchise it is a series of games where you take control of a group of worms that are out to kill one another. With highly advanced weapons as well as some unconventional weapons players take turns choosing one of their worms and shooting one of their weapons trying to eliminate the enemy worms. So why am I bringing up Worms you may ask? As soon as I saw the game that I am looking at today, Tank Maniacs, the comparison was obvious. Tank Maniacs basically looked like what you would get if you took the Worms franchise and made it into a real time combat game. Tank Maniacs is a silly but fun multiplayer arcade game that is best in shorter doses.

Tank Maniacs takes place in the distant year of 20XX. After a nuclear war most of the world has been destroyed leaving few survivors. In this dreadful new world the survivors have little entertainment left. To fill this void the man known as the “Showrunner” creates a show called Tank Maniacs. As most people can’t leave their homes Tank Maniacs transports viewers to exotic locations where warriors in tanks try to destroy one another. In the free for all tank battle will your warrior come out on top and defeat all of the rival tanks?

I began this review by comparing Tank Maniacs to the Worms franchise and after playing the game that comparison was warranted. The two games share a lot in common except that Tank Maniacs takes place in real time and is more action packed than strategic. At its core Tank Maniacs is an arcade battle/party game. Each player is given a tank with the objective of destroying the other tanks, unless they are your teammates. All of the players will play at the same time as each player controls their own tank. You control your tank’s left and right movement and there is also a jump button. Otherwise as you are a tank you have a weapon that you can fire. Like Worms the shooting mechanic is pretty basic. You choose the angle that you want to shoot at and then press the fire button and a projectile is launched. The speed and distance that the projectile will fly will depend on the angle you chose along with the momentum of your tank in the direction that you are firing. You need to try to aim and apply enough momentum on the projectiles to hit enemy tanks while avoiding your teammates and your own tank as there is friendly fire in the game.

This might seem kind of basic, but Tank Maniacs adds in another mechanic that mixes things up. Throughout the match crates will be dropped on the battlefield. When a player drives through one of these crates they will unlock an upgrade to their tank. This replenishes their tank’s health and gives them a new projectile that they will fire. These new projectiles are still fired the same for the most part, but they act in different ways from your normal projectile. Some of the upgrades are pretty obvious like a heavily armored tank that shoots out grenades that explode after a while. Then there are the stranger weapons which include a tank that shoots nesting dolls which are more dangerous each time it breaks and a chicken gun that shoots out eggs. These special tanks are considerably more powerful than your typical tank but most of them have drawbacks as well.

Tank Maniacs features various different modes that you and the other players can compete in. These include being the first to get a certain number of kills, being the last tank standing, and there are modes that add other obstacles into the equation. Each of the modes also include team modes where you can team up with other players or bots. In all of these modes the gameplay basically comes down to trying to destroy your enemies with your projectiles while avoiding their projectiles. Shooting and avoiding projectiles is easier said than done as there are regularly several projectiles flying through the air at a time and tanks are regularly moving around which makes aiming quite a bit more difficult.

As a fan of the Worms franchise I thought the idea of a real time Worms game sounded really interesting. I am always interested in checking out a new quirky arcade party game. For the most part I enjoyed Tank Maniacs. The gameplay is kind of basic but fun nonetheless. It is fun trying to shoot the other tanks while avoiding the other tanks’ projectiles. Tank Maniacs is a game that is not meant to be taken seriously as it doesn’t avoid its silly premise. This will probably turn off some people, but it also makes for a good arcade party game. The game works great as a couch multiplayer game. With how simple the gameplay is players can quickly jump in without a lot of explanation of what they have to do. I really wouldn’t recommended playing the game by yourself as it is much more enjoyable to face off against your friends and family. If Tank Maniacs’s concept sounds interesting you should enjoy your time with the game.

While a lot of the tank upgrades are quite silly they are really important to your success in the game. The normal tanks do a decent amount of damage, but they are inferior to the upgraded tanks. Some of the upgraded tanks will take a while to get a hang of but they deal considerably more damage. Your normal tank takes a couple shots to destroy a tank while an upgraded tank can kill another tank in one well aimed shot. In addition to being more powerful they are just more enjoyable to use as well. I always enjoyed the silly weapons in Worms and that is the case in Tank Maniacs as well. The game has quite a few different types of tanks and they all play differently. Some of the tanks seem to be considerably more powerful than others though. On top of all of this every time you get a tank upgrade you recover all of your health. Thus whenever a new crate is dropped players will race to collect it. You are going to have a hard time winning a round without collecting quite a few crates.

As for Tank Maniac’s atmosphere I found it to be a little hit or miss. For the most part I liked the game’s style. The characters, unique tanks, and the environments are well designed and give the game a lot of character. I think the graphical style works well for the game. It could have done more with the characters though. You get to choose which character you play as, but it doesn’t have much impact on the actual game. Your character choice is only shown along the top of the screen and it impacts the color of your tank. I wish the game would have done a little more to make the tanks represent the character you chose. As for the audio the background music it is solid. At first I really liked the announcer as I found him to be kind of funny and he helped sell the theme that the game is part of a television show. The problem with the announcer is that he will repeat the same phrases over and over again to the point where he becomes quite annoying. After around 20-30 minutes I really wanted to mute the announcer as I was sick of hearing the same things over and over again.

I would say that the biggest issue that I have with the game comes from the fact that it is not the type of game that you play for hours at a time. As the gameplay is quite simple you will mostly be doing the same things in every game. Basically all you do is shoot and try to avoid enemy attacks. This is fun but it gets a little repetitive after a while. Like a lot of these type of arcade/party games it is best in shorter doses. The game is best played for 30 minutes to an hour. After that point the game can get a little repetitive. I mostly see Tank Maniacs as the type of game that you play for a while and then come back to it another day.

While Tank Maniacs is a game that is best in a party situation with three other players, the game does include computer AIs. I wanted to check out the AIs to see if they were any good. I was left with mixed feelings. In some ways the AIs can be pretty good and in other ways they can be pretty stupid. On the positive side the AIs can put up a pretty good challenge when they want to. The computer’s aim is pretty good as they will kill you quite a bit. The problem is that for every time the AIs are smart they can be just as dumb. Enemies will regularly fire projectiles and kill themselves or their teammate(s). In stages with pits and other obstacles the AIs will also regularly just drive into them killing themselves. Ultimately the computer AIs are both smart and dumb at the same time. If you don’t have other people to play with they will be fine, but the game will be more enjoyable with human competitors.

The final issue that I had with Tank Maniacs is that I wish there was an option to take off friendly fire. I am guessing that this was a design choice to add more chaos to the game as you have to avoid shooting yourself and your teammates. I could also see the game being a little on the easy side if there was no punishment for bad shots. I think you should have the option to turn it off though as friendly fire has a pretty big impact on the game. Until you become really good at the game you will likely kill yourself or your teammates almost as much as you kill the other tanks. The fact that you can kill your teammate(s) makes it more likely that you will play passively as you don’t want to shoot into the area where your teammate is in fear that you will end up killing them. A lot of people will probably like this chaos, but I wish the game would have given you the option to turn it off.

Heading into playing Tank Maniacs it felt a lot like what you would get if you made the Worms franchise into a real-time game. Instead of taking your time shooting wacky weapons all of the players play at the same time trying to eliminate their competition. The gameplay is quite simple as you mostly just move around avoiding bullets while aiming and shooting your own weapon. Then you add in the quirky weapons which add another dimension to the game. Despite the simple concept the game is quite fun if you enjoy arcade party games. The game can get a little repetitive after a while though where it is probably best as a game that you play for half an hour to an hour and then come back to it another day. I also found the computer AI to be hit or miss and I think the game should have allowed you to turn off friendly fire. I ultimately enjoyed my time with Tank Maniacs though.