Collect the most chips by the end of the game.

To start your turn you draw one of the character cards from the draw pile. You will play the current round with the player whose character was chosen. If you draw your own character you get to pick who you want to play with. You then roll the twelve sided die and draw the top word card. The target word for the round is the word on the card that matches the number you rolled. Without letting anyone else see, show your partner for the round the card so they can see what the target word is. 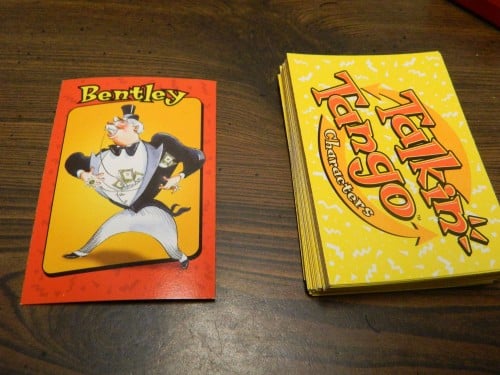 Before starting both of the players must decide on how much time they think it will take to get one of the other players to guess the word. The players can choose ten, twenty or thirty seconds with the amount of time chosen affecting the points earned or lost in a round. 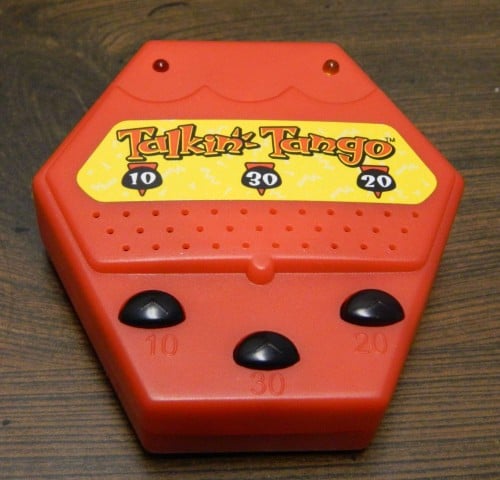 The players playing in the current round must choose how much time they need to describe the word and press the corresponding button on the timer. 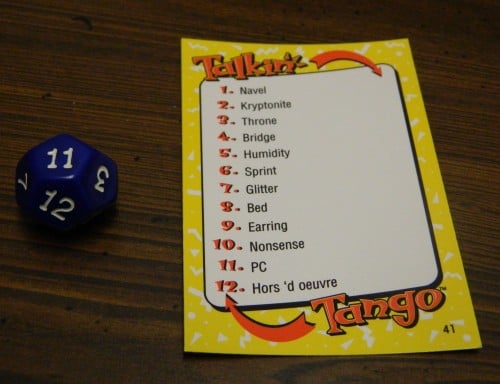 The target word for the current round is “PC”. The two players could form the sentence “A device in your home that you use to surf the internet.”

While the two players describe the word, the other players try to guess what the word is. Players can guess as many words as they want (at any time) since there is no punishment for incorrect guesses. If a player guesses the correct word the round ends with the two players describing the word and the player who guessed correctly earning points (see the scoring section for details). If no player guesses the word before the timer runs out, both of the players describing the word will lose points.

While describing the word the following rules need to be followed:

When players choose how much time they need to describe the word they are also choosing how many chips they are willing to risk on a question. The amount of chips risked for each amount of time are as follows:

If a player successfully guessed the word the two players describing the word and the person who guessed correctly all receive the number of chips risked on the question. If no one guessed the correct answer the two players who described the word lose chips based on how much time they chose. Players can never have a negative amount of chips.

After scoring is completed play passes to the player on the left.

After the designated number of rounds have been completed, all of the players count up their chips. The player with the most chips wins the game. If there is a tie, two players that aren’t part of the tie describe a word and whichever tied player guesses the word first will win the game.

In order to add more challenge to the game, Talkin’ Tango includes a word die. If players want an additional challenge they can start using the die. Players roll the die to start each round and the pair has to start their sentence with the word rolled.

Talkin’ Tango is the type of game that some people are going to be good at while others struggle with it. In order to be good at the game you really need to be in sync with your partner or be quick on your feet to figure out what your partner is leading you to. If you are not good at thinking on your feet you are really going to struggle with the game. The game is pretty easy to play though so most people shouldn’t have too much trouble with the game.

One idea I liked about the game was how partners are chosen. The game could have just had people pick their own partners but that would have been kind of boring since players would probably keep picking the same players over and over again especially if they were doing well with that partner. By having to choose cards the pairs are randomly chosen and each player usually has to play with every other player at least once in every game. The only problem with the card mechanic is that it makes it likely that some players will get to describe more words than other players which makes it easier to score points.

Having pairs randomly assigned actually supports one of the best parts of the game which is the fact that the game can be really funny when two partners are on totally different wavelengths. Usually both players will be somewhat on the same page to the point that both players can work off what the other player says. Sometimes things don’t work as planned though. Things get interesting when the two players aren’t on the same wavelength. It can be pretty funny when the two players try to push the other player unsuccessfully toward their line of thinking. When these rounds end it is funny to see the two players try to explain to their partner where they were trying to lead them to.

While Talkin’ Tango works pretty well as a game, for some people it might work better as an experience where you just have fun rather than keeping score. The game’s mechanics would still be fun even if you didn’t play for points. This might be especially true if you play with really competitive players since you can kind of cheat in the game. A player could purposefully not guess in rounds where the player in first place is giving out clues. By throwing these rounds players could force the player in first place to lose chips which could help all of the players catch up.

While the game claims that it can be played with just four players, it barely is playable. Talkin’ Tango is a game that is probably best with six to eight players. The reason the game doesn’t really work with four players is that the scoring system is almost pointless with so few people. With four players there are essentially two outcomes in every round. Either three players will all move forward the same number of spaces or two players will move back. Unless one player is significantly better or worse than the other players, pretty much every single player will have similar scores. Even if the game worked with four players I would probably still recommend playing the game with as many players as possible. With more players there are more potential different pairings of players and there are more players guessing on every word. Talkin’ Tango is a party game and will thrive with more players.

Overall I had fun playing Talkin’ Tango. It is an interesting idea that does a good job blending a party game with a word game. While not everyone is going to be particularly good at the game, the game is pretty easy to play. It’s not the type of game that I would play all of the time but it is a game that I would bring out every so often. I just wish the game would work better with four players.

If you don’t like word games, party games or the concept you aren’t going to like Talkin’ Tango. If you are looking for a party word game though I think you could get quite a bit of fun out of Talkin’ Tango.

Angel in the Attic Board Game Review and Instructions
Click here to cancel reply.