While not as popular today as it once was, for quite a long time one of the first card games that most children were taught was a game called Slapjack. The basic premise of the game is that players race to slap the pile of played cards whenever a jack is revealed. At this point games like Slapjack are so old that there have been a ton of different variants released over the years. One of those game was Avocado Smash which we took a look at a while ago. Today I am looking at another called Taco Cat Goat Cheese Pizza. I didn’t know what to think of the game before playing it as these games are kind of fun even if they don’t really differ much from each other. Taco Cat Goat Cheese Pizza is a simple and silly game that children should enjoy, but it fails to really differentiate itself from many other similar games.

On a player’s turn they will flip over the top card from their stack of cards. The card should be turned face up away from them in order to prevent cheating. As they are turning the card over they will say the next word in the following sequence: Taco, Cat, Goat, Cheese, Pizza. For example the first player will say “Taco”, the second will say “Cat” and so on. If there isn’t a match the next player to the left will flip over their card. 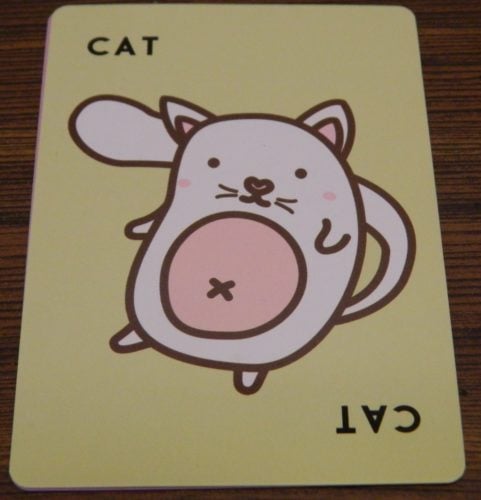 One of the players has begun the game by playing a cat card. As it doesn’t match the word “taco” which was said by the player, a match was not made this turn.

When a player has run out of cards in their hand, they will list off the next object in the sequence on their turn and if it matches the top card in the pile the players will slap the pile.

In addition to being last to slap the pile there are a number of other penalties that players can incur. If a player commits any of these penalties they will have to take all of the cards from the pile.

When a player has played the last card from their hand they have the opportunity to win the game. The next time that there is a match or a special card is revealed, if a player with no cards remaining is the first to complete the action they will win the game.

I have to say that I had some mixed feelings heading into playing Taco Cat Goat Cheese Pizza. This genre of card slapping games have been around for a long time. After playing Taco Cat Goat Cheese Pizza I have to say that the game doesn’t really do anything to differentiate itself from the rest of the games from this genre. The basic premise of the game is really simple. Players take turns playing one of the cards from their hand to the table and saying the next word in the game’s title. If the card they play matches the word said by the player, all of the players race to slap the cards. The last player to slap the pile has to take all of the cards. Every so often a special card will be revealed that forces players to perform another action before slapping the cards. The first player to get rid of all of their cards and be the first to slap the pile wins.

On its surface the premise behind the game is not bad. There is a reason that this genre of games have lasted so long. The game’s greatest strength is the fact that it is so easy to play. The game has a recommended age of 8+, but I would say five or six is probably more accurate. The rules are so simple that the game can be taught in maybe a minute or two. Probably the hardest part of the game is remembering the order of the words. At first you may have to reference the box or the back of the cards to remember which word is next. Many people are probably already familiar with Slapjack or one of the other variant games which will make it easier to pick up the game. Taco Cat Goat Cheese Pizza is the type of game that you can bring out the cards and almost immediately jump into a game. The length is going to vary based on the skill level of the players as some games could go on for a pretty long time. I would say that most will only take around 10-15 minutes though. These two things make the game a pretty good filler game.

The one area where Taco Cat Goat Cheese Pizza differentiates itself is the addition of the special cards. When one of these special cards are drawn players are forced to do a simple animal action which is pretty silly. I will admit that players are likely going to have pretty differing opinions on these cards. I personally found these actions to be really silly and kind of stupid. I thought they just distracted from the rest of the game. I am not surprised by this though as I have never been a big fan of games that force players to perform silly actions.

I can see some people really enjoying these actions though. This is the area where it is pretty evident that the game was designed for children and parents. I wasn’t a fan of them, but I think younger children will love performing these silly actions. Taco Cat Goat Cheese Pizza is game that is just not meant to be taken seriously. In many ways you make a fool out of yourself playing the game. This along with the cute artwork and animal theme will probably really appeal to children.

By far the biggest problem that I had with Taco Cat Goat Cheese Pizza is that it fails to really differentiate itself. If you have played one of these type of slapping games before you have pretty much played all of them. Outside of adding the silly actions that you sometimes have to perform, the game does nothing new. I have played a number of these games in the past and I can’t think of anything that would make me want to play Taco Cat Goat Cheese Pizza over any of these other games. In fact I think it is actually worse than some of the other games that I have played.

To illustrate I want to compare Taco Cat Goat Cheese Pizza to Avocado Smash which is a very similar game. The premise of Avocado Smash is very similar. Players take turns revealing one card at a time. When a match is found the players race to slap the cards trying to get rid of all of the cards from their hands. While the premise is basically the same, it somewhat differentiates itself by giving players a couple different ways to match. While playing cards the players will count up. If the card that is revealed either matches the previous card that was played or the number that is called out by the player, the players will race to slap the cards. By having two different ways to match cards all of the players have more to consider. Having to both compare visually and audibly you are also more prone to make mistakes. This leads to a considerably more enjoyable game. Outside of wanting the silly mechanics found in Taco Cat Goat Cheese Pizza, I see no reason not to pick up Avocado Smash over it as it is just a better overall game.

Ultimately Taco Cat Goat Cheese Pizza is a pretty average game. The game is really simple to play as you basically just slap the cards when the card that the player plays matches the word that they say out loud. The game can be learned in a minute or two and it will normally play pretty quickly. It is pretty obvious that the game was built in order to appeal to children. From the cute artwork to silly actions that you have to perform I think younger children will enjoy the game. The problem is that the game doesn’t really do anything particularly original. There have been many other games that have utilized a similar premise and Taco Cat Goat Cheese Pizza doesn’t really do anything to differentiate itself. I have played a few other games with a similar premise and I personally enjoyed them more than Taco Cat Goat Cheese Pizza. In particular I thought Avocado Smash was a better game.

My recommendation for Taco Cat Goat Cheese Pizza depends on your opinion of “slapping” games and silly game mechanics. If you hate slapping games or already own another similar game from the genre I see no reason to pick up Taco Cat Goat Cheese Pizza. Those that want a silly and simple to play game that should appeal to younger children will probably enjoy the game and should consider picking it up.