Dice games have probably been one of the board game genres that have had the most reviews here on Geeky Hobbies. While they aren’t my favorite genre, I generally enjoy them as they are quick and easy to play. One of the reasons we have looked at so many dice games though is probably because there are a lot of games released for the genre every year. In addition to dice games, another genre that we have looked at quite a few games from in the past have been speed games. I generally enjoy speed games even though they aren’t particularly deep either. Today I am looking at Ta-Da! which is a dice game that features a lot of speed mechanics as well. Ta-Da! is a simple fun little dice game even though it fails to really differentiate itself in any meaningful way.

How to Play Ta-Da!

The game is played in rounds.

Each round begins with each player drawing Spell cards until they have two in their hand.

The top card from the Feat deck is revealed. This card puts a rule in place that must be followed. If a player should fail to follow this rule at any time, they will be disqualified from winning the round. 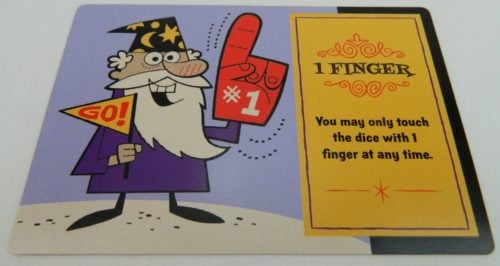 Each player chooses one of the two Spell cards in their hand to play for the round. The card you don’t choose will be kept and can be played in a future round. Once everyone has chosen their Spell card all of the chosen cards will be revealed.

For this round the player has chosen to attempt the Flingo Springo Spell card. In order to win the round they will have to roll the four symbols on the bottom of the card before the other players complete their card.

Once everyone is ready one of the players will shout out “Go” and the round will begin. Each player will begin rolling their dice. As there are no turns, players can roll their dice as quickly as they want. After each roll a player can choose to keep one of their rolled dice that match one of the symbols on their chosen Spell card. They will place this dice on the corresponding spot on their Spell card. The player will then put the rest of the dice back into their dice cup and roll again. 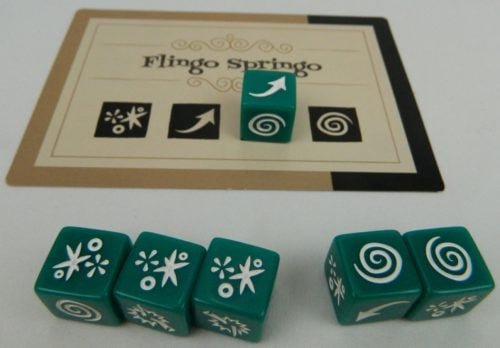 This player has chosen to keep the arrow symbol that they rolled. They will place it on their card and will then re-roll the rest of the dice.

This player has rolled all of the symbols on their chosen Spell card. They will yell out Ta-Da!. Depending on the number of players, if they were one of the first to complete their card they will score a point for the round.

The player(s) that won a round will keep the card face up to remind them that they won the round. Should a player win a round with a card that has an additional action on it, the player will take that action right away. All cards from the players that lost the round will be discarded. 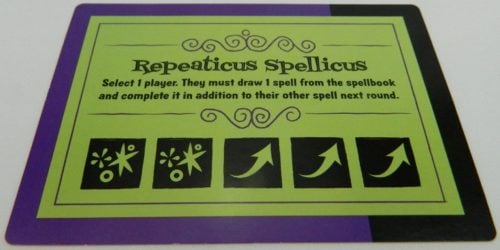 A player won the round with this Spell card. They will choose another player who will have to complete two Spell cards in the next round.

If no one has won the game yet, another round is played following the same process detailed above.

My Thoughts on Ta-Da!

At its core Ta-Da! is basically a speed dice game. Each player is given a dice combination that they have to roll. Everyone rolls their dice at the same time trying to complete their combination before the other players. Whoever is able to complete six of their combinations first wins the game. That pretty much sums up the basic gameplay of Ta-Da!. In a way the game plays somewhat like Yahtzee except that there are no turns, and you can roll the dice as many times as you want.

Having played quite a few different dice games over the years, Ta-Da! is pretty similar to a lot of games from the genre. Off the top of my head I don’t know how many games that I have played that have used this same premise, but it likely has been at least a handful. This is not that surprising as most dice games are built around rolling certain combinations. So it was only natural that games would get rid of players taking turns and just have them compete to roll a combination as quickly as possible. While Ta-Da! does a couple somewhat unique things which I will get to later, the game is not the most original. If you have already played one of these speed dice games before, you likely will already have a pretty good idea on whether you will enjoy Ta-Da!.

While the game is not the most original, I still had some fun playing Ta-Da!. The game is far from deep as there is little strategy to the game. Basically your success in the game comes down to rolling well and quickly. If you can roll the dice quickly and have luck on your side, you likely will do well in the game. If not there really isn’t much you can do to improve your chances of winning. I think the game’s greatest strength comes from the fact that it is a game that you don’t have to put too much thought into. The game takes maybe a couple of minutes to learn and games take maybe 15-20 minutes at the longest to finish. If you don’t really care about who ultimately wins, it is fun just rolling the dice as quickly as possible to complete your combination for the current round.

Maybe the only strategy Ta-Da! has is players choosing which Spell card that they will attempt each round. Each of these Spells have different requirements to complete them. Some even have special actions that you get to take if you complete the card. What card you end up choosing could have an impact on how successful you are in a round. Unfortunately all of the cards don’t feel equal. The cards that give you a special action are harder to complete, but if you can complete them their special actions can be way overpowered. Other Spell cards that have no special actions are also harder than others as well. Two of the symbols appear on two faces of the dice and the other two symbols only appear on one. Some Spell cards only feature the symbols that are on two sides, while others have the symbols that only appear on one side. Statistically speaking it is harder to roll the combinations on the second type of cards. The Spell cards that you are randomly given will have an impact on how well you will do in the game.

Other than the Spell cards, one other area where the game somewhat differentiates itself is the fact that you can only keep one of your dice each roll no matter what. Typically these type of games let you keep any dice which match your current combination. I don’t know how I felt about only being able to keep one dice each roll. It kind of sucks rolling multiple symbols that you need and only being able to keep one of them. I think in a way though this actually exchanges some of the luck from a traditional dice rolling game for more of an emphasis on speed. Since you can only keep one dice each roll, no matter how well you roll you need to roll fast to complete your card before the other players. You can’t get lucky and just roll all of the symbols you need in just one or two rolls.

The last mechanic that I haven’t talked about yet is the Feat cards. The Feat cards are honestly the thing about the game that I am the most torn about. Basically the Feat cards add little obstacles/challenges that players need to deal with while also trying to complete their Spell cards. In theory I like these cards as they add an interesting twist to the game making the rounds feel different from one another. Some of the Feats I really liked as well. The Feats that basically impact your ability to roll the dice were fun as they added more challenge to the game. For example one card forces you to hold your Spell card in the air while balancing all of your kept dice on the card while trying to roll the other dice. Other Feats impact how you can roll the dice or move them around. I found these Feats to be good additions to the game since they add the right kind of silly to the game. They add to the enjoyment of the game.

The problem with the Feats is that for every good one, there is one bad one. The good Feats add to the gameplay by adding an additional challenge to the game. The bad Feats just make the game worse in my opinion. Basically these cards have you do something silly whenever you roll the dice or add a die to your Spell card. These mechanics add nothing to the gameplay other than making the players look silly. I have never been a fan of adding silly mechanics to a game just to add them. I can see these cards appealing to some players, but those who don’t like to make themselves look like a fool likely won’t like them. I personally would like to not use these cards at all, but there aren’t enough Feat cards in the game to eliminate them and still have enough to play the game.

As for Ta-Da!’s components, I liked them for the most part. The game comes with quite a few dice and they are of a pretty high quality. The dice have unique symbols and they are engraved into the dice so they shouldn’t fade off. The dice cups are pretty nice as well. The game utilizes pretty large cards which give you space to lay the dice out on the card. The game’s artwork is pretty good for the most part. Probably the biggest issue I had with the components is just the fact that the box is larger than it probably had to be. For such a simple game the box is kind of big.

Should You Buy Ta-Da!?

Ultimately I found Ta-Da! to be a pretty average dice game. I wouldn’t say that the game is particularly original as in many ways it is similar to your typical speed dice game. Basically all of the players race to try and complete their combinations as quickly as possible. The game is not particularly deep and relies on a lot of luck. The game can be kind of fun though, and is simple and quick enough where you don’t have to put too much thought into what you are doing. The game adds a couple twists to the formula, but they don’t do a lot to really differentiate the game. The Feat cards had potential as some tweak the game in fun ways. Others are kind of stupid though as their only purpose is to make players look silly.