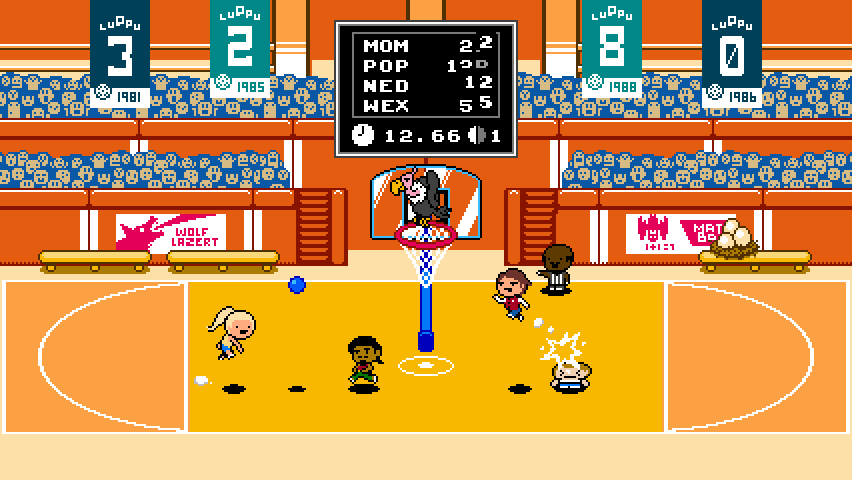 Growing up in the NES/SNES era of video games one of my guilty pleasures from that era was the Olympic/track and field games. You could debate whether they were actually good games but there was just something enjoyable about their simplicity. When I saw Super Sportmatchen on Steam it immediately reminded me of these type of games from the NES/SNES era so I was intrigued to see how well they would hold up today. Super Sportmatchen does a good job recreating track and field games from the NES/SNES era leading to fun but sometimes flawed mini games.

While some of the mini games aren’t highly original, for the most part I had fun playing them. Most of the game require you to only use a few buttons which makes Super Sportmatchen one of those games that anyone can quickly jump in and play immediately after reading the short game description before the event. Super Sportmatchen is a perfect game for a party situation as the game excels when you play it with other people. This is an example of a game that works well in local multiplayer as you celebrate your wins over the other players. This is shown by the fact that I yelled out loud when I made a miracle throw at the end of a Boll Toss game which stole the victory for my team.

While the game includes computer A.I., there are two main reasons that you probably want to play the game against other human players. First this is the type of game that is just more enjoyable playing with other people that are sitting next to you. The other reason is that at this point I would say that the computer AI could use some work. I will clarify that this is based on playing the pre-release version of the game so the computer A.I. could have improved by the time of the final release. The problem with the A.I. is that it is usually either terrible or basically impossible to beat. The game doesn’t seem to have a difficulty slider so you are stuck with whatever difficulty the game decides to give you. While it is not that exciting playing the computer when it is constantly messing up, that is more enjoyable than when the computer acts like it is on steroids. There were several times during the game where it would have been basically impossible to beat the A.I. without being an expert at the games. Even then it would be debatable whether I could have beat some of the computers. Hopefully the developers fix the A.I. as at this point I probably wouldn’t recommend playing the game against the A.I.

I mentioned earlier that most of the games are pretty simple and straightforward which makes them easy to pick up and play. While the games are simple enough that everyone should be able to quickly pick up how to play them, doing well in them is a different story. I did pretty well in some of the games right away but there are a lot of games that require quite a bit of practice in order to do well in them. This isn’t much of an issue if you are just playing them to have fun with some friends but if you want to excel at them you are going to have to put in the work. Without practicing the games a lot, some of the games kind of feel random so players shouldn’t take the game too seriously.

When it comes down to choosing which games you want to play, you have three different game modes. There is a mode where you can choose five different events. Another mode has you play all of the mini games. Whoever or whichever team wins the most games ends up winning the match. I found both of these modes to be fine even though I preferred the mode where you didn’t play all of the games since you could then avoid some of the games that you don’t really care for. The game also has an endless mode that lets you keep playing the same mini game over and over again. The game gives you a score for how well you do each time and the player that scores the most points wins. I like the idea of an endless mode but I wish it either let you choose different games or would randomly choose the next game.

Being a game that obviously took inspiration from the 8 and 16 bit era of video games, I appreciated the game’s artwork. The pixel graphic style works well for the game. The game tries for more of a cutesy style of graphics and I think it works pretty well. I did find it a little weird for animals to randomly appear on the screen though to congratulate you on your success.

One small technical issue that I had with Super Sportmatchen was the fact that the game doesn’t let you skip through the “filler” material between mini games. These might be used to hide behind the scenes loading which is understandable. After you have played each game a couple times though you kind of just want to get to the start of the next mini game instead of waiting through the transitions to and from each event. If these transitions aren’t hiding loading, I kind of wish the game could have included a skip button in order to speed up the time between each mini game.

Basically Super Sportmatchen is exactly what I thought it was going to be when I first saw it. It is a collection of little sports mini games reminiscent of track and field games from the NES/SNES era. The games are quick and to the point where anyone should be able to quickly pick up a controller and join the game. While some of the mini games are better than others, for the most part they are pretty fun for a party style game. I would highly recommend playing the game with other people though since at this point the computer A.I. is pretty hit and miss. Super Sportmatchen is a game that is fun to play in short doses but it is not something that I would play for long stretches of time.