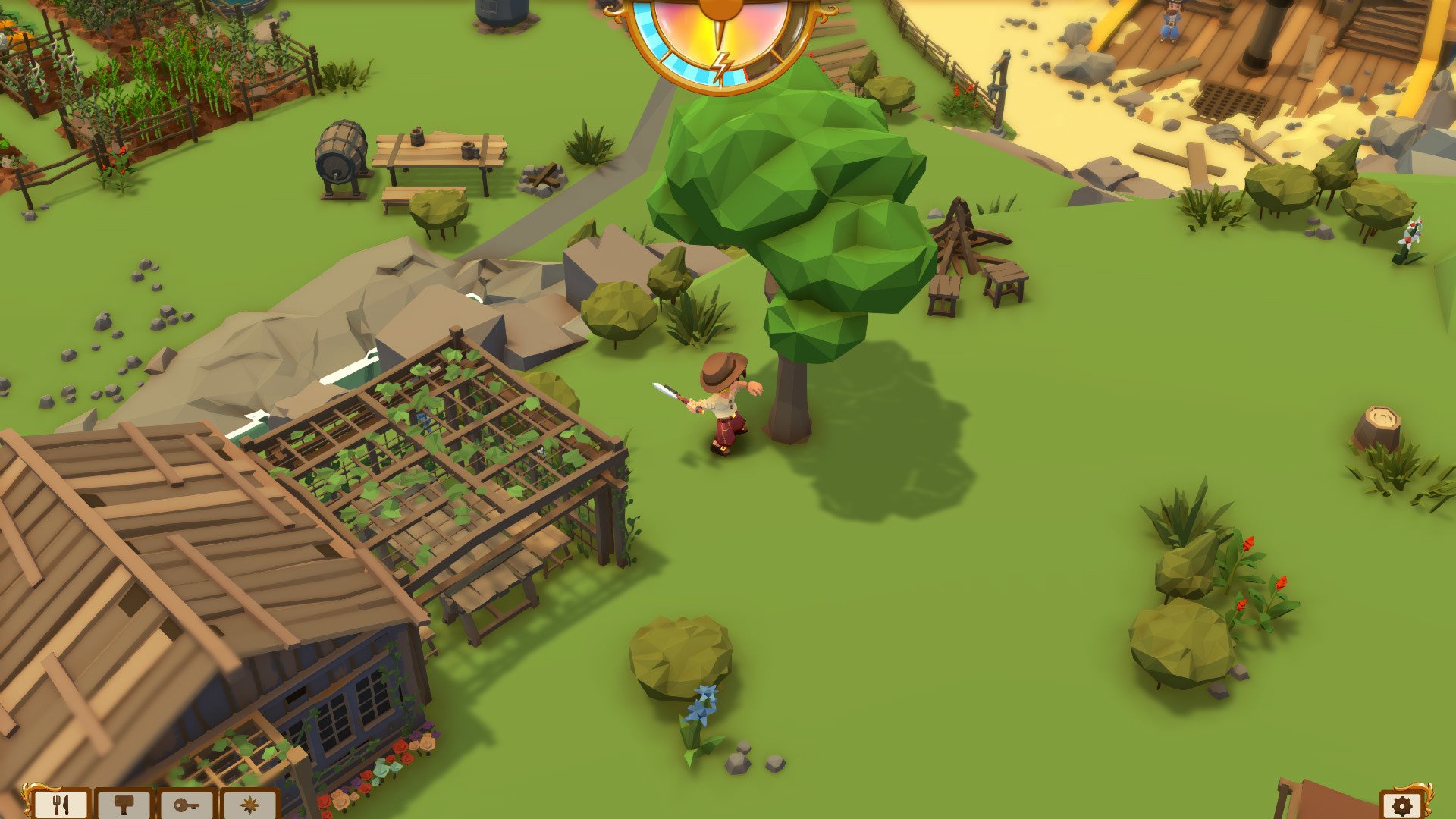 When I was given the chance to review Stranded Sails: Explorers of the Cursed Islands, I thought there was no way the game wouldn’t be right up my alley. I thought it would successfully blend multiple different video game genres I enjoy together into one great package. I was imagining a good mix of farming games like Stardew Valley, adventure games like The Legend of Zelda, with some crafting and open world elements as well. Almost all of the game listed as inspiration for Stranded Sails I’ve either already loved or know I will when I get around to playing them (The Legend of Zelda, Yonder, Stardew Valley, Harvest Moon, Farm Together, My Time at Portia, Super Mario games, and Rune Factory are all listed on the game’s Steam page as inspiration). While the game’s store description now makes it clear in the description of the game (it didn’t at the time I requested my code), I wasn’t expecting it to be so linear. Even worse, the quests given to you in Stranded Sails are almost all fetch quests, making it a chore simulator without the sense of progression or the addictive qualities (in a good way) of a game like Stardew Valley. If you are a longtime follower of Geeky Hobbies, you know that we do not like to give out negative reviews. We rarely have to as we only pick out games we are likely to enjoy and pass on those not really made for us. While Stranded Sails is certainly playable (as long as you really like fetch quests), it is a definite disappointment in my book.

In Stranded Sails, your character is the son or daughter of a ship captain. Your character is on your very first voyage when disaster strikes and your ship is shipwrecked on an archipelago filled with unexplored islands. With your father injured in the crash, you must find the rest of your stranded shipmates, build cabins for all of them, set up a renewable source of food, find random objects people need, and even fight off threats to your camp. You also have an energy bar to keep an eye on, though no real progress is lost should you over-strain yourself.

Even though I don’t have a ton of positives to talk about, I want to begin with them anyway. First up, the art style is pretty cute. It isn’t going to win any awards for style but the game is pretty nice to look at. There’s also a few quality of life improvements over some of the other games in these genres including the ability to sleep whenever you want and work throughout the night if you have enough stamina (your schedule is set in stone in a game like Stardew Valley), a water bucket that can be used as many times as needed until you put it away (in which case it needs to be refilled again), most seeds don’t need to be replanted again, and a few other smaller improvements. Unfortunately, these improvements don’t exactly make up for the loss of other mechanics. Finally, some of the minigames are interesting. I especially found the cooking/Mastermind combination to be surprisingly fun. To discover new recipes, you have to try to match the right ingredients and put them in the right spot to learn them. Not all of these minigames are a success though as Stranded Sails may have the most frustrating fishing mechanics I’ve ever seen.

Unfortunately, those are the only real positives I have to write about with Stranded Sails. Everything else is either too simplistic or doesn’t really have a big impact on the game. Because of the simplicity and cute art, Stranded Sails could be fun for kids but I have a feeling they will become bored of the constant fetch quests. The biggest problem with Stranded Sails is the linear gameplay and the game’s reliance on fetch quests and other chores. Why even include farming when you rarely need to utilize it (its only really useful to cook recipes and stews to get your stamina back before long journeys but if you’re at camp you can also just sleep in your bed to fill up your stamina bar as well)? Nearly the entire game is structured like this: First, you’ll talk to one of your crew members who will give you a quest to find something or someone. You’ll run around (sometimes for a very long time) looking for said person or objects, run back to camp (sometimes this will take a long time though you can also teleport back via the map), and maybe craft something simple before talking to the quest giver again. Then they’ll send you off on another similar quest to the one you just finished. You’ll make yourself some stew (or sleep) to replenish your energy and then you’ll repeat the exact same thing again. Repeat this over and over again and that’s the gist of Stranded Sails. By the way, can’t anybody help your poor character out? While some of them have bumps and bruises (and in one case a concussion), all of their injuries should have healed within a few days yet they still refuse to lift a finger weeks later. Fetch quests aren’t the end of the world and if used sparingly, they are perfectly fine as they’ll give you a sense of progression. However, overusing them or in this case, creating almost an entire game out of fetch quests is a tough ask for your players. Instead of helping players feel like they’re progressing, too many fetch quests just make things boring.

Ultimately, I think Stranded Sails tried to be too many things at once and this decision hurt the gameplay significantly. If the game would have focused on a few things instead of trying to be everything at once, it might have been more than a super long fetch quest where very few of the mechanics are even necessary. For example, you can’t even build stuff where you want. Every cabin, crafting station, etc. goes in a predetermined position which are often far away from each other (leading to even more walking time). You can’t grow food to sell or trade for other goods. You can’t even feed your fellow castaways to help you out with your fetch quests. Outside of growing crops to feed yourself on long journeys, there’s really no point to the farming at all.

Thankfully, at least on Steam a free demo of the prologue is available which should allow you to determine whether or not Stranded Sails is for you before you buy it. I would highly recommend you try the demo before buying as this is not a game for everybody. I like most games I try (or at least enjoy them enough to finish them) but even I struggled to keep playing Stranded Sails. Trying the game before you buy it is highly recommended. I’m not sure what is considered the “prologue” but as the entire game is pretty much the same, you’ll definitely get a good feel of whether or not it is something you should purchase.

You can tell the developers of Stranded Sails tried, they clearly gave it their all. Unfortunately, the repetition, simplicity, and lack of meaningful gameplay add up to a disappointing package. The game is also a bit short in the length department. Some people have finished the game in 8-10 hours, I believe it took me more like 12-15 hours but that’s still a little short for a $24.99 game. You can add in a few hours if you are an achievement/trophy hunter like me but it’s still not enough content to justify the price tag in my opinion. Stranded Sails does have some positives as well, but I would recommend that anybody interested in it should try the demo first. There’s definitely an audience for games like this but there are also plenty of gamers who will be disappointed in the final result (like me for example).