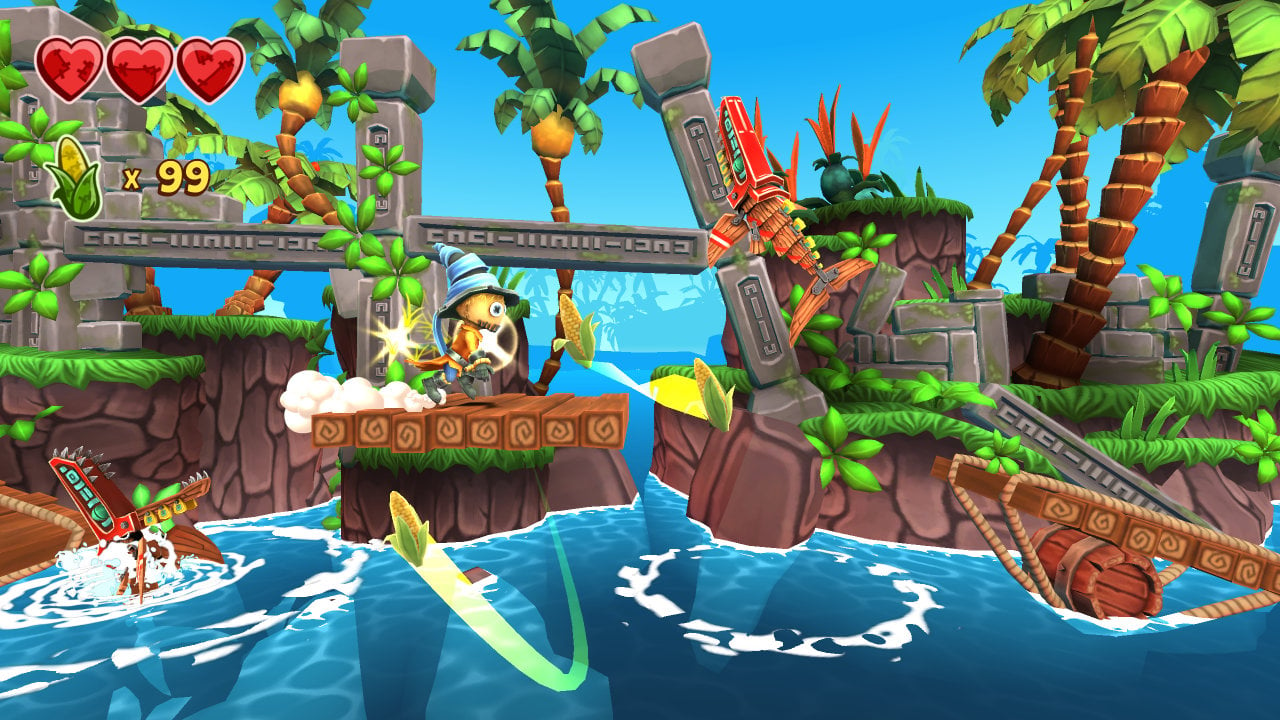 I have always been a pretty big fan of the Donkey Kong franchise. In particular I fondly remember playing the original Donkey Kong Country on the SNES as well as several of the other games from the series. While the franchise shares a lot in common with your typical 2D platformers, the series has its own unique style as well. This was one of the reasons why I was intrigued when I first saw Stitchy in Tooki Trouble as right away it was obvious that the game took inspiration from the Donkey Kong series. I was intrigued to see what an indie studio could do with this type of game. Stitchy in Tooki Trouble is a fun indie tribute to the Donkey Kong franchise that many fans should enjoy even if it can be kind of easy.

In Stitchy in Tooki Trouble you play as a scarecrow. When a horde of Tooki steal all of the corn that Stitchy was supposed to protect, you must go on a quest to retrieve it. Can Stitchy successfully navigate many dangers in order to retrieve all of the stolen corn?

As I mentioned at the beginning of this review, Stitchy in Tooki Trouble’s gameplay shares a lot in common with the Donkey Kong franchise. Those familiar with the franchise should already have a pretty good idea of what to expect from the game. Basically like all 2D platformers the objective of each level is to reach the end of the level without dying. You are given a double jump to jump between platforms. Other than pits that instantly kill you, there are enemies that also stand in your way. To kill/destroy an enemy you can either jump on its head multiple times (depending on the type of enemy), or you can use the jump slam attack. You are given three hearts and will lose one each time you run into an enemy or other obstacle. If you lose all of your hearts before reaching the end of the level, you lose a life.

In addition to your typical platforming, Stitchy in Tooki Trouble also has two other mechanics that should feel familiar to fans of the Donkey Kong franchise. Every so often there will be a level where you ride in a mine cart. The mine cart moves forward automatically and you need to time your jumps well in order to make it across gaps and to avoid running into enemies and other dangers. The game also occasionally brings out barrels that launch Stitchy. You get to control when the barrel shoots, so you need to time it correctly so you get shot into another barrel and not into a pit/enemy.

Those that like the franchise though should be intrigued as I thought Stitchy in Tooki Trouble did a really good job replicating the Donkey Kong franchise. The game does a good job recreating the framework which makes these type of games enjoyable. I wouldn’t say that it is as good as its inspiration (it would be hard for any indie studio to replicate a game made by a large developer), but I think it deserves a lot of credit for giving players a good indie game in this genre of platformers. The main reason why the game isn’t quite as good as its inspiration is that the controls aren’t quite as precise, and the gameplay is a little more limited.

I still had a lot of fun playing the game though. Outside of a few occasional hiccups, the controls are usually quite precise. The jumping feels a little floaty which does make the game easier, but otherwise the platforming is really satisfying. The gameplay as a whole is really fun. It is satisfying jumping between platforms and defeating enemies. The mine cart and barrel sections are a nice change of pace as well. Each world also ends with a boss fight which are quite good. Anyone who likes these type of platformers should have a lot of fun with Stitchy in Tooki Trouble.

I will say though that Stitchy in Tooki Trouble feels like it was made more as a family game than the Donkey Kong games. Those games were quite difficult at times where you would die a lot before you completed a level. Things are not nearly as difficult in Stitchy in Tooki Trouble. I didn’t die all that often in the game. I would attribute most of my deaths in the game to trying to collect the hidden collectibles in each level which unlocks a secret level in each world. Most of the collectibles aren’t that hard to find either. I see this both as a positive and a negative. On the positive side the game avoids becoming frustrating. The game is easy enough that children and even people who don’t play a lot of platformers should be able to play the game. On the negative side, this might disappoint people that are looking for a game that is difficult like its inspiration. If you play a lot of games from this genre, you likely won’t have much trouble beating Stitchy in Tooki Trouble.

The game’s easier difficulty has lead to the game being on the shorter side. The game consists of three worlds. Each world has nine normal levels, one boss level, and a hidden level which is unlocked by retrieving all of the collectibles from each level in the world. The levels aren’t particularly long as most are only a couple minutes long when you factor out deaths. Therefore you likely won’t get a lot of time out of the game. I would say that on average each world took a little less than an hour to complete. In total I beat the game in around three hours. The game has a little replay value in finding all of the collectibles. Each level also has time trials where you earn stars based on how fast you finish a level. These times force you to be constantly moving as you likely won’t get the three star time if you waste time trying to retrieve the collectibles. This adds a decent amount of replay value to the game as you probably won’t get three stars on most of the levels in your first attempt. The time trials also add a decent amount of difficulty to the game as it is much harder to beat these times than just completing the levels. At a retail price of $13 the length is not bad. I just wish the game was longer as I was really enjoying it before it ended.

The developers of Stitchy in Tooki Trouble were trying to create a game based on their love of the Donkey Kong series. For the most part I think they succeeded in that task. Outside of the tweak in the theme, the gameplay is very similar. You jump between platforms and on enemies as you try to reach the end of levels. The game is a little simpler than Donkey Kong and the controls aren’t quite as good, but the gameplay is still quite fun. Fans of this genre of platformer will likely really enjoy Stitchy in Tooki Trouble. I will say that the game is quite a bit easier though as most people likely won’t have too much trouble completing the levels. This also leads to the game being kind of short.