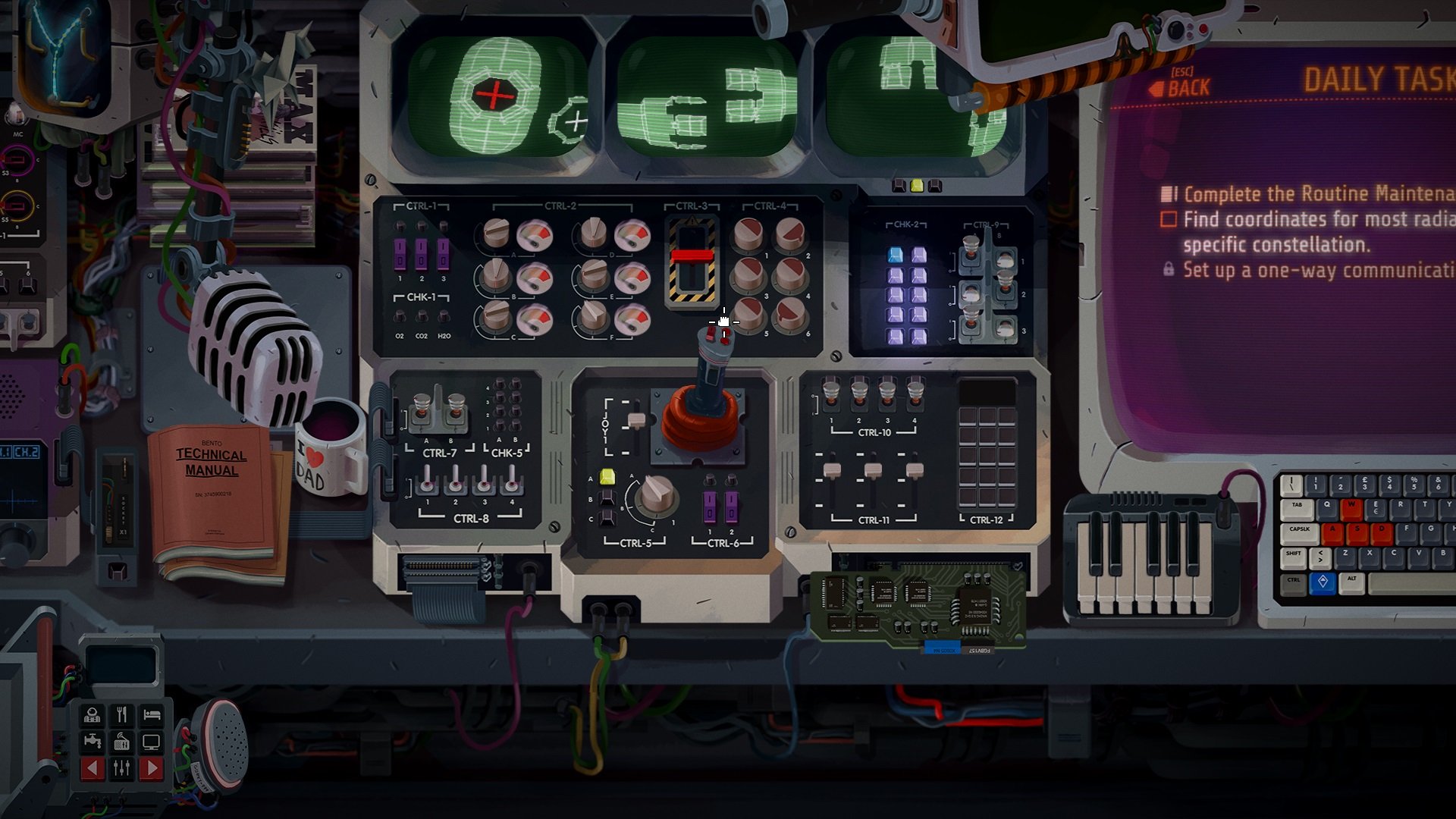 In Still There you play as Karl Hamba. After his daughter’s death Karl decides to take a job on The Bento. The Bento is basically a space lighthouse which is used for various experiments and to relay messages and help other ships that are in trouble. Life on The Bento is pretty solitary as Karl is all alone on the ship with the computer’s AI Gorky. Each day is basically the same as Karl is tasked with performing various scientific and maintenance tasks. Life is peaceful if not a little lonely. That all changes when Karl receives an emergency radio transmission which changes everything.

The best way to describe Still There’s gameplay is to say that it is a combination of a point and click game and a puzzle game. Those familiar with the point and click genre should already be quite familiar with Still There’s gameplay. Most of the time you will be clicking on various objects to either pick them up or interact with them in some way. This is mostly used to turn various switches, or combine objects together. In addition there is a decent amount of dialog where you are given options to choose from. I am not sure how much impact any particular decision has on the overall story, but you are given choices over the dialogs outcome.

While pretty much all point and click games are also puzzle games, the puzzles in Still There seem quite a bit different than your typical point and click game. Quite a few of the puzzles still involve finding the right objects and combining them together. It seems like the game relies on more traditional puzzle mechanics than your typical game from the genre though. Quite a few of the game’s puzzles involve figuring out how The Bento’s various systems work and then performing a certain action with them. This involves quite a few different types of puzzle mechanics including a surprising number of engineering/technology puzzles. Still There just seems to have a bigger emphasis on the puzzles than most other point and click games.

The thing that really distinguishes Still There from other games is the idea that the game does not hold your hand. Basically at the beginning of the day you are given a list of tasks that you need to complete. The game doesn’t really tell you how to complete any of the tasks though. You can ask your computer AI Gorky for some help but the help you receive is usually pretty abstract only giving you a general idea of what you are supposed to do. In many situations the only advice you are given is to consult the technical manual. Yes this game has a technical manual and you will be referring to it a lot in the game. The manual gives you various diagrams and other information that you need in order to use/repair the various systems on The Bento. These are mostly written like a traditional manual where you have to figure out a lot on your own about how the various systems work.

Other than the fact that the game is a point and click game this is the element of the game that is going to have the most impact of your enjoyment of Still There. Most of the time during the game you will receive little direction. You are given a set of tasks and you then have to figure it out on your own. This involves a lot of trial and error as over half of each puzzle is just figuring out how the various systems work. The puzzles themselves aren’t all that difficult. Figuring out how the puzzles work though can make them quite difficult. You need to get good at reading instruction manuals and trying various things until you get a hang of the mechanics. I think some people will really enjoy this and others will find it to be frustrating.

On the positive side the game does give you a challenge. I play a lot of puzzle games and I found elements of the game to be quite difficult. If you are looking for a game featuring challenging puzzles you likely won’t be disappointed. The game makes you really think in order to figure out how some of the systems work. This element of the game is unique where at times it doesn’t even feel like Still There is a point and click game. The puzzle design is really unique as a lot of puzzles deal with utilizing older technology and engineering. I have played a lot of puzzle/point and click games, and I can’t remember a game quite like Still There in this area. People who don’t like when games hold their hands will probably find it refreshing that Still There basically just tells you to figure it out yourself.

This leads to the biggest problem with Still There though. Still There is not like your typical game. The game offers little guidance meaning that you have to figure out almost everything on your own. This leads to a challenging game, but it also can make the game kind of frustrating at times. Some of the systems are easier to figure out than others. Some make little sense though and the manual doesn’t really help. If you don’t have a lot of experience with old technology/engineering you may have trouble figuring out what you are supposed to even do. There will be times in the game where you have no idea what you are supposed to do to proceed in the game. I can understand the game wanting to stay challenging and forcing you to figure things out yourself. At times the game goes too far though.

In these situations you need to either keep trying new things until you finally figure out what you are supposed to do or you need to look for help. The game offers an easy mode for some of the puzzles which simplifies them, but you don’t get the corresponding achievements. Otherwise you may need to consult a walkthrough to see what you are supposed to do. I generally try to avoid guides, but for some of the puzzles I don’t know if I could have ever solved them without a little nudge in the right direction. Usually when you use a guide to get past a difficult puzzle you get that “why didn’t I think of that” feeling. That is not always the case in Still There as there will be times where you may have never figured out how to start using the system properly without some guidance.

In addition to the puzzles the other major element of Still There is the fact that it is a story driven game. To avoid spoilers I am not going to really get into details about the story. Basically the story is about Karl as he deals with the loss of his daughter. This combines with his sense of loneliness as he lives on a small space station all by himself. The story also has an interesting sci-fi feel to it which includes a really interesting twist that I am not going to spoil. I can see the story not being for everyone, but I thought it was well done. The story is well written and has some touching moments. The characters are well developed and the game does a good job creating a world that you want to explore. Still There does a great job setting its mood. Fans of a good video game story should be pleased with this element of the game.

As Still There is a point and click game I knew the game wasn’t going to have a lot of replay value. How much time you get out of the game is really going to depend on how quickly you can solve the puzzles or how quickly you seek out help if you get stuck. I can see some people solving the puzzles pretty quickly. If you can’t figure out what you are supposed to do though things will probably take quite a bit longer. I would guess that most people could probably finish the game within around 5-8 hours. As for replay value it basically comes down to whether you want to get all of the achievements or replay the story. You are unlikely to get all of the achievements in one playthrough as several of them come from performing tasks not on your to do list.

Still There shares a lot in common with your typical point and click game and yet it feels quite a bit different as well. Like all games from the genre you are mostly just picking up and interacting with various objects in order to solve the puzzles. While many of the puzzles are similar to your typical game from the genre, the game also features a surprising number of technical puzzles. This along with the fact that the game doesn’t give you a lot of direction creates a unique experience. Most of the puzzles revolve around figuring out how the system itself works which involves consulting the technical manual regularly. Some people will really enjoy this as it is unique and provides a good challenge. At times though it can be kind of frustrating as you struggle to figure out what you are supposed to do. Outside of the gameplay Still There has a compelling story about dealing with loss which is combined with some interesting sci-fi elements.

If you have never really been into point and click or puzzle games I don’t see Still There being for you. People who don’t like the idea of the game not giving you a lot of direction may also not like the game. Those that don’t mind the challenge though should consider picking up Still There as it is a unique experience.