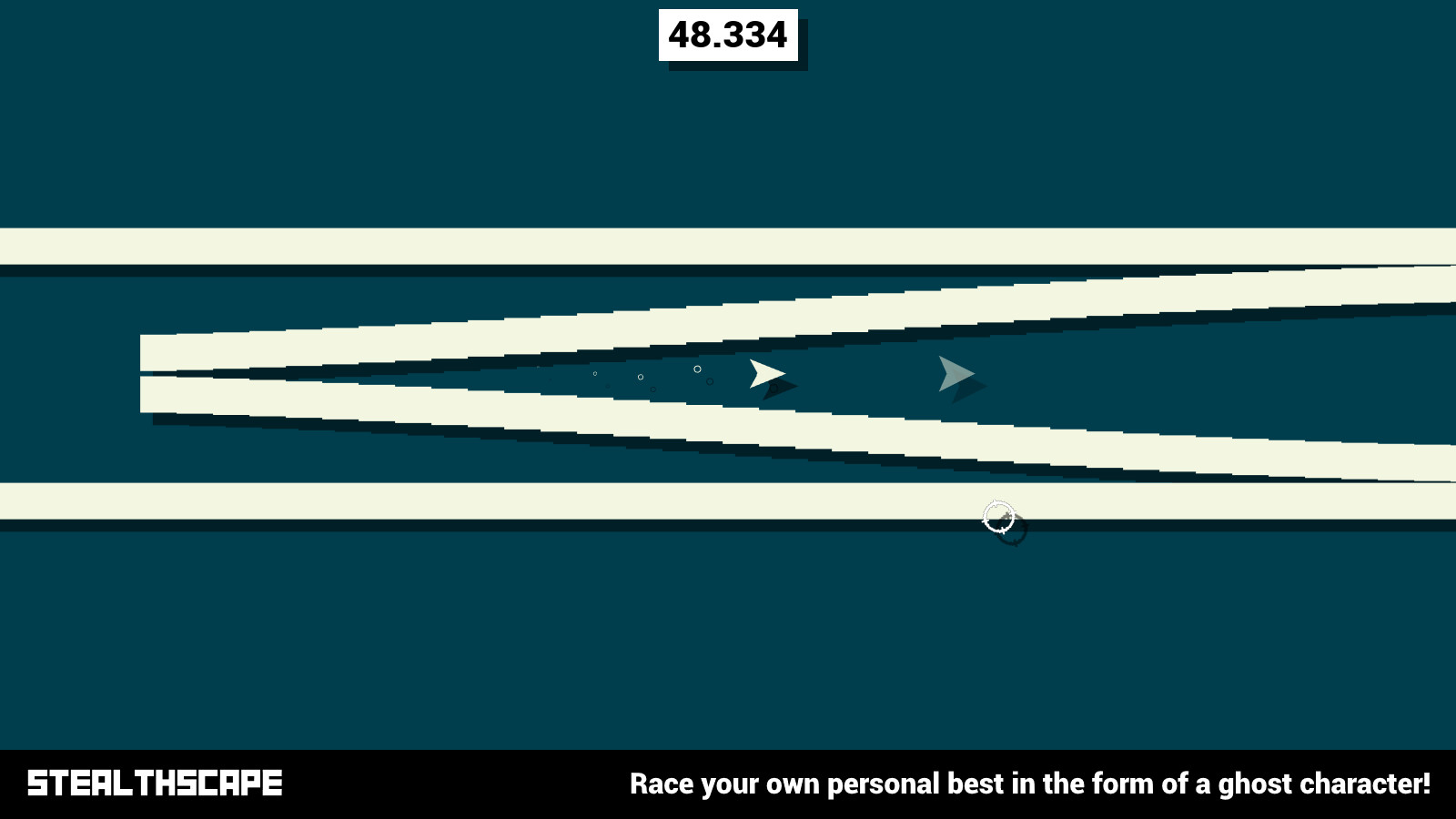 Released into Early Access on March 30th, Stealthscape is a game that intrigued me when I first saw the trailer for the game. While I don’t play a lot of arcade racing games, the game intrigued me because the racing looked really quick. The gameplay also seemed simple with the basic premise of just trying to reach the end of the level. Added to this was the fact that the game included a level editor allowing players to create and share their own levels. I didn’t know exactly what to expect from Stealthscape, but it looked interesting enough that I wanted to check it out. Stealthscape may be a little light on content at this point, but the gameplay is really fun and shows a lot of potential.

In Stealthscape you take control of your very own spaceship. The objective of each stage is to get your spaceship to the portal at the end of the level without blowing up. The mechanics are pretty simple. You control the direction and speed of your spaceship as well as a weapon which can be used to shoot various obstacles that get in your way. You must navigate your ship through the tight turns of the levels to avoid various obstacles. Some will just bounce you around slowing you down while others will destroy your ship on impact. As you navigate around these obstacles you need to press various buttons or deal with other contraptions in order to open up your path to the exit.

Finishing a level in time is not really a concern at least for the levels currently in the game. Instead Stealthscape is more about completing the levels as quickly as possible. Every level in the campaign has a global high score. If you want to place anywhere near the top you need to do more than just complete a level as quickly as possible. The top places are relegated to the players that make few to no errors and collect a bunch of the dots along the way. Most of the top scores have more time left on the clock than what they started the level with.

So you might be thinking if the time limit doesn’t really matter outside of high scores where does the actual challenge come from? The levels in Stealthscape can only take 10-30 seconds, but that is a best case scenario. If you beat a level on your first attempt you can beat it in around 30 seconds. There are some levels in the game where that is possible. These levels are meant to be easy as they teach you new mechanics. They are the minority of levels though. A large majority of the levels are considerably more difficult. Stealthscape is the type of game that is not afraid to kill you. You will die in the game quite a bit as you need some precise timing in order to beat some of the levels. In order to succeed you need to learn from your mistakes to do better on your next run. Each time you die you have a better idea of how to approach a level which means that you should do better on your next attempt.

Normally I am not a big fan of video games that constantly kill you, but I didn’t think it was that big of an issue for Stealthscape. This is mostly because the levels are so short. When you die you are only losing 10-20 seconds of progress so you aren’t losing much. You will want to quickly jump right back into the game hoping that this time you will be able to get further. This might be the thing that I enjoyed most about Stealthscape. The gameplay is pretty basic as you are mostly just flying around avoiding obstacles. The game is enjoyable though because the flying is fast and satisfying. There are some levels where you can take your time, but in most levels you are forced to move quickly in order to avoid obstacles. This keeps up the pace where you want to keep trying until you are successful.

The gameplay for the most part is really enjoyable. Racing around the corridors avoiding obstacles and collecting as many dots as possible is quite fun. The controls are responsive which is key for this type of game as it would be frustrating to keep dying due to the controls not being as responsive as they should be. The ships do control a little different than you would expect though. The ships don’t immediately change direction based on a new input. Instead the ships have a sense of momentum to them which gives them some inertia to sudden changes in direction. For the most part I like this decision as it feels like it adds weight to the ships. It does take some time to get used to though. You will die quite a bit as you adjust to maneuvering your ship correctly to make it around tight corners. The controls feel a little “floaty” at times where I would maybe turn down this momentum a little. Otherwise I thought the controls were quite good.

As Stealthscape is currently in Early Access I was curious about how far the game was in the development process. At this point I would say that the game is pretty far in the process in some areas and early in the process in other areas. At this point I would say that a majority of the gameplay mechanics seem like they are already in the game. The game controls well except for feeling a little floaty at times. I didn’t encounter any bugs and the game works really well at this point.

I would say the area where the game needs the most right now is the campaign. The developer specifically says on the Steam page that this is the area that will be developed the most during Early Access. The campaign currently has 30 levels spread among two worlds. With the levels being pretty short this means that you can beat the current campaign pretty quickly unless you really struggle with one of the levels or you keep replaying a level hoping to get a high score. I would expect most people would be able to beat all of the levels within around an hour. There is not a lot of official content in Stealthscape at this point, but what is currently there is really encouraging. Most of the levels are really fun and can be quite challenging. A lot of Stealthscape’s story is not in the game yet, but what I have seen so far is quite encouraging. I am really intrigued to see what the campaign becomes when it is finalized.

While there might not be a lot of official content in the game right now, Stealthscape includes a level editor. This allows players to create their own levels and share them with other players. I always like when games include their own level editors as it significantly increases the amount of content that a game can potentially have. Some user created levels are not great, but it can drastically increase the playtime of a game. As I am not much of a creator I didn’t spend a lot of time with the level creator. In my limited experience with the creation tool though it looked like it was really easy to use which means that it should be easy to make your own levels. Like all games with a level editor I am really interested in seeing how much of a community develops behind Stealthscape. If users can create a lot of great levels for the game I can see the game having a lot of great content to play through.

Stealthscape is going to be in Early Access for a while as the developer expects the process to take until at least Q4 2020 or even Q1 of 2021. For a game that is going to continue to be refined over the next 6 months to a year I was left impressed with where the game is at this point. The game’s premise is simple as you just try to fly your ship as quickly as possible around the obstacles to reach the end portal. The levels are really short, but Stealthscape is the type of game where you will die a lot as you learn from your mistakes to improve your next run. The controls are good for the most part leading to a fun game that is hard to put down. At this point the game doesn’t have a ton of content though as you can probably beat all of the current campaign levels in around an hour. With the addition of a level creator and more levels being added throughout the Early Access process I think Stealthscape has the potential to be a really good indie arcade racing game.

If the Stealthscape’s premise doesn’t really intrigue you I don’t think the game will be for you. Fans of fast arcade racing games though will probably really enjoy the game. Whether you wait for more content to be added to the game or you pick it up right away, Stealthscape is a game to keep an eye on.