Here on Geeky Hobbies we like to look at board games from all eras. Generally speaking newer board games are better mostly because the industry has really grown in the last couple decades. Every so often we like to check out some older games though to try and find some hidden gems. Today I am looking at the game Steady Eddie which was originally released back in 1962 which was quite a few years before I was born. While there were many games from the 1960s that are still being published to this day, Steady Eddie was not one of them as it appears to have only been printed once. On the surface the game looked like another pretty generic dexterity game, but there was a chance that the game would exceed my expectations. Steady Eddie is a game that is typical of the era when it was made which unfortunately doesn’t hold up today.

How to Play Steady Eddie

The rules for Steady Eddie feature a number of different games that you can play. I will begin by describing the basic rules of the game and then go into details of each individual game.

To begin each of the games you will place Eddie on a flat surface making sure that the ball is firmly placed on the spring. 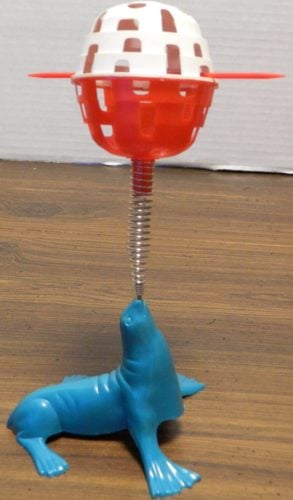 The current player has placed a stick inside the ball on top of Eddie’s nose.

If the stick that a player is trying to insert into the ball falls out the player will have the opportunity to try and insert it again.

All of the sticks will be evenly divided between all of the players. Any extra sticks are inserted into the ball before the game begins.

The players will decide who will go first and play will proceed clockwise. On each player’s turn they will try to insert one of their sticks into the ball. When inserting sticks players must follow the basic rules. 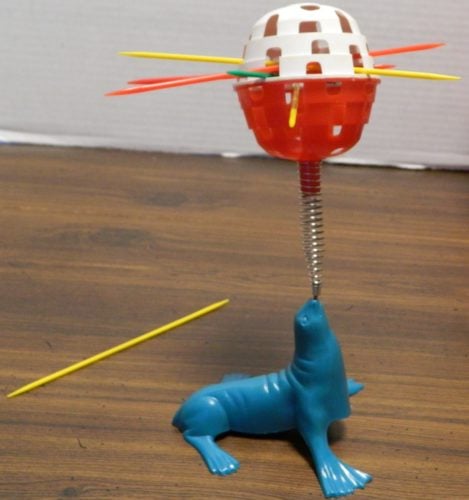 The current player has knocked a stick out of the ball on Eddie’s nose. This player has been eliminated from the game.

If all of the sticks are inserted into the ball the players will start removing sticks from the ball. If a stick other than the one the player is trying to remove falls out, the player is eliminated.

The last player remaining wins the game. If all of the sticks are inserted and removed from the ball, all remaining players share the victory.

In the solitaire game the player tries to insert all of the sticks into the ball and then remove them without having any fall out. If any sticks fall out the player has to restart from the beginning.

In this mode all of the players agree to a time limit for each player.

The players will take turns trying to insert as many of the sticks as they can into the ball. If any previously placed sticks fall out the player’s turn ends.

When the player runs out of time or a stick falls out they will count how many sticks are in the ball. The player who gets the most sticks in the ball wins the game.

My Thoughts on Steady Eddie

Simply put Steady Eddie is a very basic dexterity game. The players take turns placing one of their sticks into the ball on Eddie’s nose and hope that it doesn’t knock out any of the other sticks. Honestly that is all there is to the game. Basically the player with the steadiest hands that can find the right holes to place their sticks in will win the game. If you have played one of these types of dexterity games before you basically know what to expect from Steady Eddie. In fact when I first saw the game it reminded me a lot of Kerplunk. I was actually kind of surprised when I found out that Steady Eddie was actually older than Kerplunk.

With such a simple concept it should surprise no one that the game is really easy to play. The game has a recommended age of 8+, but I don’t know why it isn’t lower. My guess is that they were either afraid that younger kids might try to swallow the sticks or that they wouldn’t have steady enough hands to do well in the game. The game itself is simple enough as you could teach it to new players in around a minute. This all leads to a game that plays really quickly. The length will depend a little on how good the players are, but I can’t see games taking more than a couple of minutes unless players take way too long placing their sticks.

While the game is easy to learn and play, playing the game well might be a different story entirely. I will preface this by saying that the game is quite old and the version I found was not in perfect condition. Based on my copy of the game it was actually quite a bit harder to place the sticks than I would have initially expected. I think this is due to a couple factors. First the holes in the ball are quite large. It is easy to fit the sticks into the holes, but this also makes it much easier for them to fall out. While playing the game we ended up placing quite a few sticks that fell out immediately. Second as the ball is on a spring each stick you place tilts the ball making it even more likely that the sticks will fall out. Finally there just aren’t a lot of angles that you can insert sticks at which will stay firmly in place. Because of these things players were eliminated from the game quite a bit quicker than I was expecting.

As I wasn’t a kid during the 1960s I don’t know how people felt about the game when it first came out. In some ways I could see younger children and their parents enjoying it. The game is easy to play after all and it is the type of game that you don’t have to put too much thought into. In some ways the game still has some of its old school charm. The components as a whole are exactly what you would expect from an early 1960s board game. Eddie is kind of cute and there are elements of the game that were pretty innovative for its time. I can see people that grew up with the game still enjoying it to this day.

Unfortunately I don’t think Steady Eddie aged that well for people born after the game was first released. I could maybe see some younger children still liking the game, but older children and adults will likely find the game to be pretty boring. The game has a sort of charm to it due to its age, but it gets pretty repetitive after a while. Players just take turns placing sticks into the ball. That is all there is to the game. The game deserves credit as it predates many dexterity games. Over the years though there have been a lot of dexterity games that have improved upon it.

One thing that doesn’t help the game is the fact that it seems to rely on quite a bit of luck for a dexterity game. There is a little skill to the game as you need to be smart on where you place sticks. You also need to be careful while placing them. Outside of this though your success seems to depend on luck. There are times where sticks fall and it doesn’t seem to be the player’s fault. Due to how the ball tilts and turns sticks could come out unexpectedly. This makes it easier for any of the players to win, but it feels a little unfair as dexterity games should reward the player that does the best.

Should You Buy Steady Eddie?

In a lot of ways Steady Eddie is a game of the early 1960s. The game is pretty much your typical dexterity game where players take turns placing a stick into the ball hoping to not knock any sticks out. With such a simple premise the game is really easy to play and it plays quickly. I was surprised that the game is more challenging than I expected as well. The problem is that there just isn’t much to the game. It can be somewhat fun at first, but it gets repetitive quickly. It actually relies on quite a bit of luck for a dexterity game as well. At one point Steady Eddie might have been a good game, but it doesn’t hold up today. In the last 50+ years there have been better dexterity games that have been released.

As for my recommendation I can probably only recommend the game to people that remember playing the game as a child. Otherwise there are better dexterity games that you could play that would also be considerably easier to find.