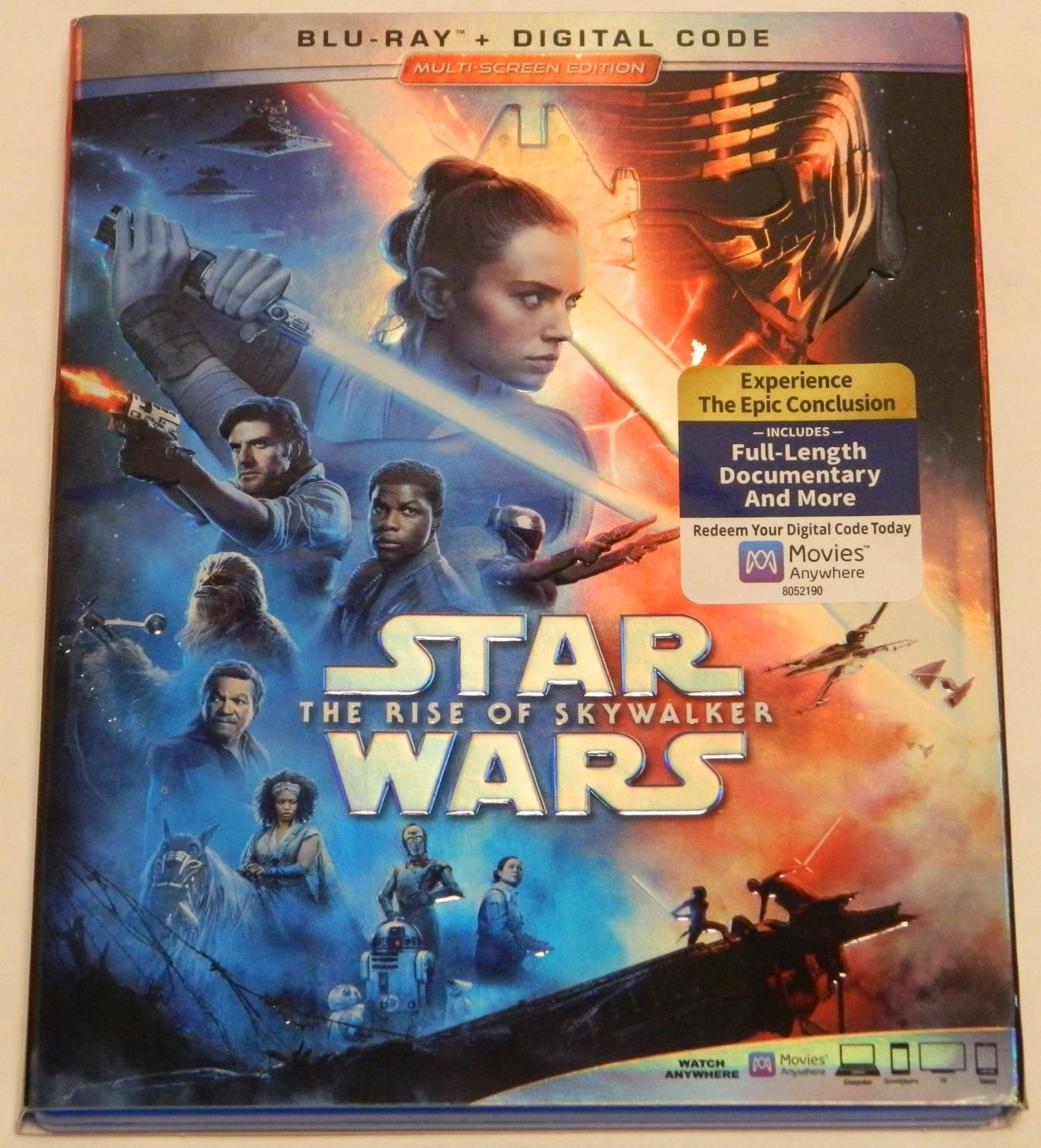 Ever since I was a kid I have always been a huge fan of the Star Wars franchise. I watched the original trilogies when I was pretty young and immediately fell in love with them. As a kid I read quite a few Star Wars books and played quite a few of the games including some that are not seen as particularly good by today’s standards. Then the infamous prequel trilogy came out when I was a teenager. While many Star Wars fans hate the prequels I have always thought that they got a bad rap. They are clearly worse than the original films, but I have always kind of enjoyed them. I thought the prequels would be the last Star Wars movies ever made due to the time it took for the prequels to eventually get made and the fact that many people didn’t like them. Then came the announcement in 2012 that the Star Wars franchise was bought by Disney with the intention of making new movies. I was nervous but excited to see what would happen.

Star Wars: The Rise of Skywalker is one of those movies that many people have very strong feelings about. Being the movie that was responsible for wrapping up the nine film story of the Skywalkers was no easy task and some people were meant to be disappointed as there is no way that it could please everyone. The movie is not perfect as there are some things that I would have done differently. I think a lot of people are too harsh on it though. I really enjoyed the movie as it shares a lot of what makes the Star Wars franchise so enjoyable. I know a lot of people will disagree with my opinion and that is okay. I think most people’s complaints come down to two things.

I think the biggest complaint with Star Wars: The Rise of Skywalker and the sequel trilogy in general is that the movies lacked a sense of focus. While I enjoyed the sequel trilogy I actually agree with this complaint. Looking back at the three films it was pretty obvious that Disney could have spent more time planning out the trilogy before filming began. Instead of each movie leading into the next it felt that each film was basically its own thing and an overall story was never formulated or it kept changing. I am not really sure why the key plot points weren’t set in place before any of the movies were shot. Each movie and director could have been able to tell their own story, but the overall plot should have remained consistent and working towards its conclusion in Star Wars: The Rise of Skywalker. Because this overall framework was never really created we ended up with three movies that in some ways feel like they were made up on the spot without pieces in place connecting them to a larger picture.

Watching the three films it felt like J.J. Abrams had an idea of where he wanted the franchise to go in Force Awakens. Then Rian Johnson took over for The Last Jedi and had his own idea for the trilogy. This was a pretty different take than J.J. Abrams’ vision. While J.J. Abrams told more of a traditional Star Wars story that a lot of people thought was basically just rehashing things from previous films, Rian Johnson took some chances. This upset some Star Wars fans which lead to a lot of people not liking The Last Jedi. Disney responded by giving the franchise back to J.J. Abrams who returned to telling a more traditional Star Wars story in The Rise of Skywalker. This lead to movie that repeated elements from previous films, and a decent amount of time being dedicated to retconning decisions made in The Last Jedi that the most vocal fans did not like.

A good example of this lack of a cohesive overall story is shown in the story of Rey’s parents. In The Force Awakens this was one of the film’s biggest mysteries that fans were really interested in figuring out in future movies. Then in The Last Jedi the mystery was basically thrown away. Fans were not happy with this so in The Rise of Skywalker it becomes a huge part of the story. There are a couple other plots like this in the trilogy where it was clear that there was no long term planning for the overall story. This prevented the story from being as good as it could have been. While I still liked the sequel trilogy this is the one thing that I agree with critics of the films on. For the next set of Star Wars films I really hope they adopt the Marvel model of planning out the overarching stories so there isn’t so much back and forth between individual films.

The other main complaint with Star Wars: The Rise of Skywalker seems to be that people aren’t big fans of the plot. I agree that Star Wars: The Rise of Skywalker probably has one of the weaker plots in the Star Wars franchise, but I still thought it was pretty good. I think many people have two main problems with the plot. First like The Force Awakens the plot does feel like it takes heavy inspiration from past movies. I think the movie could have taken some more chances as it does feel a little samey at times. The other main complaint with the plot is that some people don’t like some of the creative choices made for the story. I may have done things a little differently, but I didn’t mind most of the creative decisions that were made. Some of the biggest twists could have used more time to set them up (this is due to not having an overall plot developed from the start), but I don’t think they were bad decisions. Some of the more criticized choices (which I won’t get into to avoid spoilers) have some basis in the expanded lore where they make more sense. Since the movie has come out these elements have been explained better in other sources as well. I can see why some people don’t like these creative choices though as they are entitled to their own opinion.

This is supplemented by the movie’s great visuals. While the movie relies on quite a bit of CGI, the CGI is really good. The movie also uses a lot of practical effects as well. After checking out the special features (more on this soon) I was genuinely surprised by how many practical effects were used in the movie. The movie creates many new interesting creatures and worlds that you want to explore. The visuals really help the film’s many set pieces. Like all Star Wars films the action sequences in Star Wars: The Rise of Skywalker are very good. Most are visually stunning and have a great pace which keeps you interested throughout. Between the various chase, action and battle sequences fans of sci-fi action should be entertained.

In addition to the visuals I thought the acting in the film was really good as well. I have always liked the new cast of characters and I think all of the associated actors do well in The Rise of Skywalker. The Rise of Skywalker does a good job adding to the backstories of most of the new characters. Like all movies in the Star Wars franchise I also thought the movie did a good job interspersing some funny jokes to lighten the mood. I also appreciate the film adding in many of the characters from the original trilogy. In particular it is nice to see Billy Dee Williams return as Lando Calrissian even if the character doesn’t play a large role in the movie. The only thing with the acting that was a little off was with the scenes with Carrie Fisher. As Carrie Fisher died before filming began the movie ended up having to use footage of Carrie Fisher that was shot for The Force Awakens. The problem with these scenes is that they feel kind of shoehorned it. Leia was needed for the film, but the available shots they had of Carrie Fisher limited what they could do and these scenes just felt a little off. There wasn’t really anything the movie could have done though without using CGI which would have looked off in its own way.

Most people have very strong feelings about Star Wars: The Rise of Skywalker. A lot of people enjoy the movie, but a lot of people hate it as well. I acknowledge some of the movie’s faults as it does have some problems regarding its plot. A decent amount of the plot is devoted to retconning aspects of the previous movie that fans didn’t like which leads to a disjointed trilogy of movies. Some people also don’t like some of the creative choices made for the plot. I may have done things a little differently and the plot is probably the biggest weakness of the film. I still thought the plot was enjoyable though. It may make a few missteps but Star Wars: The Rise of Skywalker still feels like a Star Wars movie including everything that I have always enjoyed about the franchise. The movie does a great job with world building introducing interesting new characters and worlds. The visuals are fantastic and the film is filled with great action sequences. The acting is great as well. Fans of special features should be pleased as well as the Blu-ray’s special features are extensive and well done.

The Skywalker Legacy, Pasaana Pursuit: Creating The Speeder Chase, Aliens in the Desert, D-O: Key to the Past, Warwick & Son, Cast of Creatures