The game is played in as many rounds as there are players. Each round begins with a different player becoming the dealer. The dealer shuffles the cards and then deals the cards face up on the table in any order they would like as long as no two cards overlap. The dealer keeps dealing cards as fast as they want until all of the cards have been dealt which is when the round ends.

While the cards are being dealt out, the other players start looking for cards that correspond to the same animal. The players are trying to grab all three cards of a particular animal to create a complete animal. The player doesn’t have to grab the three cards in a particular order. For example the player can grab the tail, then the head, and finally the torso. When the player grabs a card (only one at a time) they place it on the top of their pile. Players can keep grabbing cards until the dealer has dealt out all of the cards.

Once the round ends, points are counted. If all three different cards of an animal are together in a players’ pile of cards, they score three points for every rhino and hippo. Every rhino or hippo card that is out of place subtracts one point from the players’ total. In the game there are also three pink elephant cards. If a player gets all three cards together they get six points. For every pink elephant card that is not in order, the player loses three points. 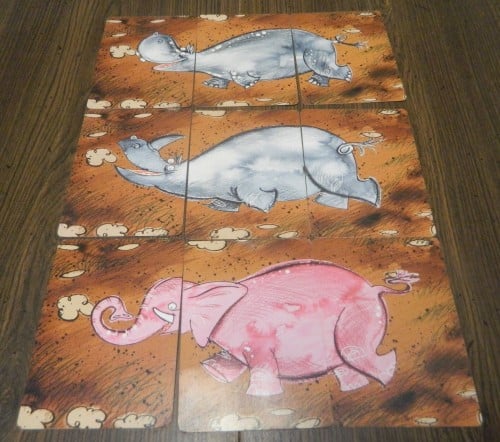 After everyone has been the dealer once (in two player games everyone gets to be the dealer twice), points are tallied. Whoever has the most points wins the game.

In 2003 Gamewright created the game Stampede! as part of their 12 Minutes or Less catalog of games. This series generally consists of simple card games that parents can play with their younger children. Stampede tries to mix a memory/matching game with a fast-paced quick-reaction game. I don’t particularly like memory games but I do like fast-paced quick-reaction games. Unfortunately I found Stampede to be kind of boring.

Stampede is the type of game where you might play it a couple times but you are then likely to tire of it. It is kind of hard to pinpoint why exactly, but the game just didn’t interest me. The game isn’t broken and it plays fine. It just isn’t very fun.

The biggest problem with the game is the artwork. The animals themselves look decent in a cartoony way. The problem with the artwork is that the rhino and hippo look way to similar. Obviously the heads look different but the torsos and tails look very similar. Looking at the cards carefully the only noticeable differences between the two animals are that they are shaded differently, the tail goes the opposite direction, and the hippo cards have some small white circles on them. In the heat of the game the only difference you can really use is the white circles.

I am guessing that the game made the animals look similar in order to make it easier to make mistakes. The problem is that the game is mostly made for children aged six to ten. For children there is not enough distinction between the cards. Even playing the game as an adult you can easily make a mistake if you are rushing to quickly to pick up cards. I didn’t play the game with any young children but I have a feeling they might struggle with the game more than they should.

I generally am a fan of quick-reaction games but Stampede has a problem of being chaotic and out of control at times. Most of these quick reaction games have some structure to them. Stampede doesn’t. The dealer is frantically trying to deal out cards since the faster they go the less points other players can get. Meanwhile players are grabbing cards from all over the table regularly getting in each others’ way. Since everyone is focusing on doing there own thing, players can either unintentionally or intentionally cheat and no other players will notice. If you don’t like chaotic games that lack any structure, you will not like Stampede.

The game supposedly supports between two to four players but I don’t see the game working very well with two players. Since one player has to be the dealer, in a two player game one player is the dealer while the other gets to pick up the cards. Since no players are competing against one another for cards, the two player game comes down to how fast the dealer can deal out cards while the other player tries to accumulate points as quickly as possible. I think this would be quite boring since the players can somewhat take their time picking up cards since they don’t have to compete against another player. The quick paced competition against other players is the best part of the game.

Stampede! is not a broken game but for some reason it is not that fun to play. It is too chaotic and with some of the cards looking so similar the game is harder than it should have been.

Just got it. Garage sale. 25 cents. What a deal. Gonna give it a shot.

Thanks from the review.