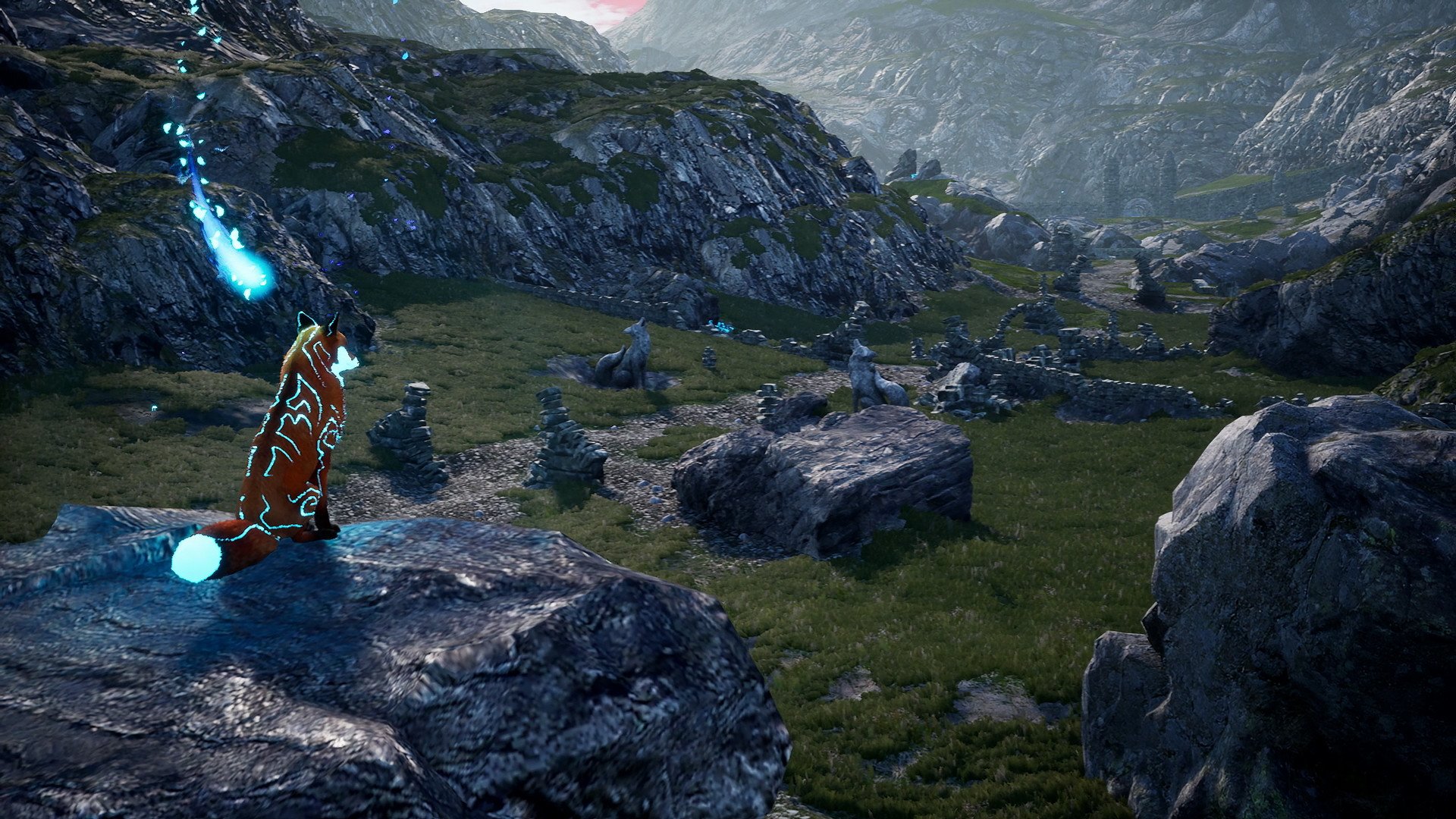 Anyone familiar with my tastes in video games will know that I generally like a bunch of different video game genres. While I am generally more interested in a game’s gameplay over its story and atmosphere, I can appreciate a game that creates a compelling story and atmosphere. I bring this up because today’s game Spirit of the North is one of those games that has a much greater emphasis on its atmosphere than your typical game. Spirit of the North is not a game that I heard a lot about but it looked intriguing. Some people may find Spirit of the North to be kind of boring as it is not your typical video game experience, but between the game’s solid gameplay and great atmosphere it is an adventure worth going on.

In Spirit of the North you play as a normal red fox. The red fox encounters a spirit fox who is the guardian of the Northern Lights. The world has been plagued by an evil that has turned the sky red. As you explore the world you come upon an ancient civilization that has gone into ruin. Based on Nordic folklore (Iceland in particular) you need to use the red fox to cleanse the evil from the world and return it to its former glory.

Spirit of the North is one of those games that are kind of hard to describe. It doesn’t really fit into one of the traditional video game genres. Instead it uses a combination of different mechanics wrapped into an adventure game. Much of the game involves running around and exploring the environment. The game puts you in a lot of large environments and just expects you to explore. Those that like exploring outdoor areas should have fun as the game features a lot of large areas to explore. One reason to explore is to find staffs and the bodies of the deceased former inhabitants. If you can reunite enough inhabitants with a staff you will be rewarded with different skins for the fox. The ultimate goal of exploring though is to find the path to your next destination.

Other than exploring the next most important mechanic in Spirit of the North is the platforming mechanic. The platforming is pretty much what you would expect as you jump over gaps or climb by jumping between platforms. For a majority of the game you are only given a single jump. You will eventually unlock a dash/glide move later in the game that will also help with jumping. You mostly use the platforming to reach the next area or to interact with something that you need to solve your current puzzle. Most of the differences in the platforming comes from the fact that you play as a fox. This means that you are controlling a four legged creature which impacts the jumping. You will occasionally miss a jump due to the jumping being slightly different, but the controls work quite well for the most part.

The final main mechanic in Spirit of the North is a puzzle mechanic. The puzzle mechanics in the game are pretty basic for the most part. Most of the puzzles just involve interacting with various objects. You will eventually be given the ability to transport a blue energy in your fox which you pick up from flowers. A lot of the puzzles involve picking up this energy and transporting it to various stones/totems/walls that have carvings on them. In addition you will also unlock other abilities which are used to complete various environmental puzzles.

I have to say that my opinion of Spirit of the North went on sort of a ride while playing the game. Before playing the game it seemed like something right up my alley. As I started playing the game though I have to admit that I was a little disappointed. In my opinion Spirit of the North starts a little slow. For the first two or so chapters there isn’t much to do in the game. You mostly just run around exploring with the occasional easy platforming section. Other than finding the hidden staffs/former inhabitants it just didn’t feel like there was much to the game. In a lot of ways the game just felt like a nature simulator as you ran around as a fox.

This right here is going to be the deciding factor in whether you are going to enjoy Spirit of the North. Spirit of the North is not going to be for everyone. The game is far from an action packed game. You will have to make some somewhat difficult jumps, but there isn’t any pressure in the game. There are no enemies or time limits. You can’t even die in the game. Instead the game is mostly about just enjoying the journey through nature which looks fantastic by the way (more on this later). Some people will find this engaging while others will find it to be kind of boring. If you don’t like games like Journey I don’t think Spirit of the North will be for you either. Those who like these types of atmospheric games though should read on.

I will admit that I was a little disappointed by the beginning of Spirit of the North as I found it to be a little boring. I am glad I stuck with the game though as it gets considerably better as you get further into the game. While the game’s atmosphere is fantastic I was a little disappointed that there wasn’t much else to the early game. After around the second chapter though the gameplay picks up quite a bit. Spirit of the North still relies a lot on running around and exploring, but the platforming and puzzle mechanics begin to play a much bigger role in the game at this point. Some of the later level design is pretty creative and well designed. Based on my own experience those that are a little disappointed by the early game should stick with Spirit of the North as it gets considerably better as you make progress.

As for the gameplay I would say that it is on the easier side for the most part. Spirit of the North is not the type of game that is meant to be challenging. The game is more about enjoying the experience which means that the gameplay is pretty easy for the most part. You will occasionally miss some jumps forcing you to return to your previous position. You may occasionally get a little lost or the solutions to the puzzles may not come to you right away (mostly due to not seeing what you can interact with). Nothing about the game is particularly challenging though. This is not necessarily a bad thing. If you are looking for a challenging game you will be disappointed. If you want a relaxing experience though you will get exactly that with Spirit of the North.

Speaking of atmosphere it is arguably the best thing about Spirit of the North. While the game’s graphics may not reach the level of a AAA game, I thought the game did a fantastic job with the atmosphere. Much of the game’s locales are large outdoor areas even though there are some man-made locales and caves as well. The game looks really good for an indie game. Even the fox looks and moves realistically. There is not much more that you can ask for with regards to an indie game. The atmosphere in the game is just great overall. This is helped by the game’s great soundtrack. The soundtrack does tend to repeat from time to time, but it includes a lot of orchestral music that really sets the mood for the game. All of this combines together to make Spirit of the North feel like a true adventure.

As for the game’s story it decides to tell it in a non traditional way. There is no dialog or text in the entire game. The only “dialog” in the game is the fox’s barking which sounds kind of weird, but is apparently what foxes actually sound like. Instead of using dialog and text the game tells its story through the environment itself. This is mostly done in two ways. First as you explore the various abandoned buildings/structures you learn about a civilization that went into ruin. You will also encounter various rock paintings/carvings which illustrate the world’s backstory. As the story is told through the environment most players will get what they want out of it. If you don’t pay attention to the environment you won’t get much out of the story. Those that explore and pay close attention to their surroundings though can find an interesting story. Due to how the story is told it requires players to interpret the story themselves.

I generally like to give an estimated length for video games and yet I can’t really do it for Spirit of the North. As I played the game on Nintendo Switch I can only give an estimate of how long it took me as there is no way to look up how long you played a game. The bigger reason is that Spirit of the North’s length is going to depend heavily on how much you explore. If you do the bare minimum the game will be quite a bit shorter than if you fully explore the environment and try to find all of the hidden collectibles. Due to this I would probably give the game a range of about 5-10 hours. If you really rush it may take a little less time. If you just want to spend more time in the environment and find all of the collectibles though it may take a little longer.

Ultimately while I enjoyed Spirit of the North it is obvious that the game is not going to appeal to everyone. Spirit of the North is not really your typical video game. The game is not filled with a bunch of action and is instead more of a journey as you explore nature. The game features a lot of running and exploring. This lead to the game starting a little slow in my opinion. The game picks up considerably though as you progress as the game introduces more platforming and puzzle mechanics. None of these are particularly challenging but they provide a nice change of pace. What makes Spirit of the North is the game’s environment. The game looks good for an indie game with wide open outdoor areas and a great soundtrack. The story is more abstract as what you get out of it will depend on how much attention you pay to your surroundings.

Basically my recommendation comes down to your opinion on atmosphere versus gameplay. The gameplay is solid, but it is not the game’s biggest selling point. People who want an action packed game or don’t really care for a game’s atmosphere probably won’t get that much out of Spirit of the North. Those that crave an engaging atmosphere in addition to the gameplay though should really enjoy Spirit of the North and should consider picking it up.