How to Play Space Shuffle

To score the most points by the end of the game.

Each player is given one space commander ID card which they place face up in front of them. Shuffle all of the planet cards and deal seven cards to every player. The rest of the cards form the draw pile. The players choose who will play first by whatever means they choose.

On a player’s turn they will take three actions.

Every card in the game features a planet, color, and a number. The color and number are used for scoring which is discussed in the next section.

When playing planet cards players have two options on how to play a card.

Players can start a new solar system by playing any planet/sun to a new pile in the center of the table. Only five solar systems can be in play during the game though so once the fifth solar system has been played this option is no longer available. 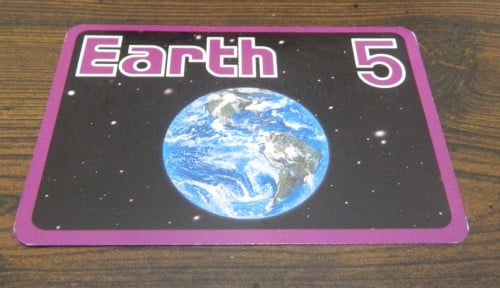 To start a new solar system the current player played the purple Earth card. This is allowed as long as there aren’t already five solar systems in play.

The other option is to play a card to a solar system already in play. To play a card to an already existing solar system, the card has to follow the correct planet order. For reference the proper planet order in Space Shuffle is Sun, Mercury, Venus, Earth, Mars, Jupiter, Saturn, Uranus, Neptune, Pluto, and Sedna. When playing a card you have to either play the planet that comes before the closest planet in the solar system to the sun or the planet that comes after the furthest planet from the sun. When playing cards to a solar system you cannot play a card out of order and two of the same planet may not be present in the same solar system. Outside of scoring the colors and numbers do not matter since you can play any colored or numbered planet card as long as it fits the planetary order. 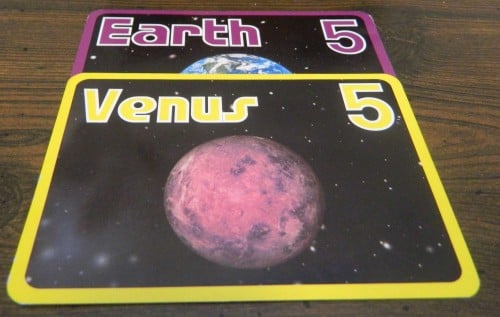 All five solar systems have been started in this game. If a player is unable to add a card to any of these solar systems, they must pass their turn.

The color and the number on the planet cards are key to scoring points in Space Shuffle.

The number on each card is the number of points that the card is worth when played.

The color of the card is also important for two reasons.

The color is also important for scoring bonus points. If a player plays a card whose color matches other cards in the same solar system they will score bonus points. The player who played the card scores points equal to the value of all of the cards that match the color of the card played. For example the green player plays a yellow three card. The solar system that the card was played on also has a yellow two and a yellow four card in it. The green player would score nine points (3+2+4) while the yellow player would only score the three points from the card that was played. 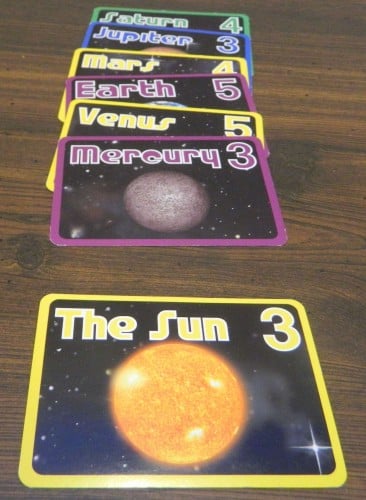 The score earned during each turn is recorded.

One of the bigger stories in the scientific community recently has been the “discovery” of what people are calling the ninth planet after Pluto lost that distinction some years ago. Even though this planet has never been seen and at the time of this review hasn’t even been given a name, it is an interesting story. With our solar system being in the news I thought it would be a good time to review a solar system themed family card game called Space Shuffle. Space Shuffle is a family style card game that tries to be educational while also being fun. While the game has some educational merits (more on this later), what is most important is whether the game is actually fun since it is a game after all. While not fantastic, Space Shuffle is a very solid little family card game.

Space Shuffle is a simple little card game where you are playing different planet cards into groups/solar systems in order to score points. The game play is pretty simple since as long as you know the order of the planets (or look at your reference card) you have most of the game down already. Basically the game involves playing a planet card that comes before or after one of the planets already on the table. Space Shuffle takes less than five minutes to learn once you get down the planet order. The game also plays pretty quickly. While your first game may take longer, I would guess that most games could be completed in around 20 minutes.

The scoring system in the game has its’ strengths and weakness.

I really don’t see the point of why players get points when their colored card gets played. This just seems like busywork and doesn’t really impact the game very much. Basically every player is going to get about the same amount of points from their colored cards being played. I am guessing all of the colors have the same number distribution so the only players who could lose out on points are the players who have cards that aren’t played before the end of the game. Since most of the cards will end up being played, this won’t have much impact on the ultimate score. Since it makes little impact on the final scores and makes score keeping a hassle, I just don’t see the point of this rule. I would recommend just ditching it in order to speed up the score keeping aspect of the game.

Since the score is calculated after each card is played, scoring can become a pain at times. You could end up spending almost as much time with score keeping as you do with the actual game. The scoring is not that difficult but there is just too much of it in my opinion. There is so much scoring in the game that I wouldn’t recommend children play the game by themselves unless they have strong math skills because the score keeping will take a long time if you don’t have a dedicated score keeper or have a player with strong math skills.

Even though it adds a lot of luck to the game, I kind of liked the idea behind the bonus scoring in the game. The bonus points add a little strategy to the game. Since you want to take advantage of scoring bonus points, you are going to want to hold cards of certain colors to add to solar systems that prominently feature that color. It is worth keeping a card around that is only worth two points if you can later add it to a solar system that will end up scoring you 20+ points. The strategy in Space Shuffle is to try and hold cards for the right moment while trying to manipulate the other players into adding cards that you need to a given solar system.

While I like the bonus point idea, it does add a lot of luck to the game. In the game I played a four player game essentially became a two player game. The fourth player had no chance at winning the game at around the midpoint, and the third player only had a slim chance at winning near the end of the game. This happened because of the bonus points. Two solar systems became predominately one color so the top three players were able to take advantage of it while the other player never had the right cards to benefit from it.

I just wish the game had more strategy to it. You can’t win Space Shuffle unless you get a good draw of cards. While you could play somewhat defensively by playing cards to a solar system to prevent it from becoming dominant in one color, I don’t know if there is much point since you are also sabotaging yourself. I really wish the game had some way where players could do a better job preventing a solar system from being dominated by one color.

Being a game from 2004 it is not surprising that the game is kind of outdated in 2016. Space Shuffle was created before Pluto lost its’ status as a planet so it is referred to as a planet even though it no longer is one. The game also introduces the “planet” of Sedna which as you know is not considered a planet. Sedna is generally considered a dwarf planet but you can’t really blame the game for making the assumption that Sedna was a planet since Sedna was discovered in 2003 a year before the game was published. So the game is not highly accurate anymore but you can really blame the game since a lot has happened in the last 12 years.

With that said Space Shuffle has some educational value. It is outdated but it can still do a pretty good job teaching children about the solar system. After just a couple games children should be very familiar with the order of the planets since the gameplay drills that into your head over and over again. Unfortunately the game missed out on a golden opportunity to be more educational by either including a larger fact sheet about the planets (only one page long) or printing facts about the planets on each of the cards. Other than learning the order of the planets, you can’t really learn much more about the solar system from Space Shuffle.

Component wise the game is quite bland. The cards are pretty typical but the artwork on the cards is boring. Each card only features a picture of the planet, the name of the planet and a numerical value. I think the game could have spiced up the cards a little and could have even added some interesting planetary facts that could have taught you something as you stared at the cards.

Space Shuffle is a very average game. There is nothing particularly bad about the game but it just isn’t special either. It is easy enough to play and is a pretty quick game once you get going. The mechanics are not bad even though they rely heavily on luck. The game is fun but just doesn’t do anything special to make it stand out above other games. If someone asked me to play the game I wouldn’t have a problem playing it but I don’t know if I would ever say to myself “I really want to play Space Shuffle.”

If you want a quick light game that could also be educational for children I think Space Shuffle would be a good choice. It could be a better game but it could also be a lot worse. If you like games that require strategy though you might be better off looking for another game unless you can find Space Shuffle for really cheap.