To begin the game the Start/Home cards are passed out as follows:

A player’s turn consists of the following:

The special cards have the following abilities:

When a row reaches 15 exactly, the Start card is flipped to the Home side. No player can affect the card after it has been flipped. All of the cards played on the Home card are moved to the discard pile. Once a player has flipped over all of their Start cards, they have won the game. 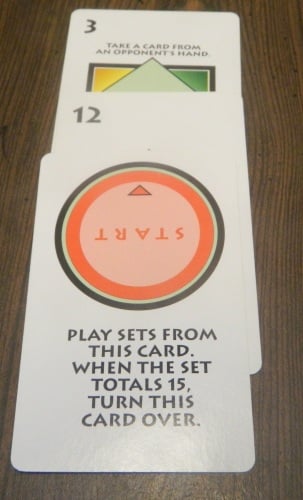 The red player has reached exactly 15 so their card is now safe. They will flip over the start card and place the three and twelve in the discard pile.

As a child I remember really liking the game Sorry. I played the game a lot as a child. I haven’t played the game in a very long time though so I don’t know how well it has held up over time. My guess is that it has not held up well since Sorry is not a particularly deep game. Like with most of their classic games, Hasbro decided to make a card game out of Sorry back in 2002. Sorry the Card Game is not a great game but it does actually improve on the original game in some ways.

Sorry the Card Game is like most card games in that you draw a card and play a card. Due to its’ simplicity, Sorry the Card Game is an easy game to learn and teach other players. If you can read the cards and count up to 15 you should have no problem understanding how to play the game. The game has a recommended age of 6+ and that seems quite accurate. Children with good reading and math skills may be able to play the game before the age of six.

The biggest strength and weakness in the game both relate to the length. On average, games last between five to ten minutes. Of the three games I played two lasted five minutes or less while the other game lasted around ten minutes. You are not going to have to invest a lot of time in a game of Sorry the Card Game.

The benefit of the game being short is that it takes a lot less time than the original Sorry. In the original Sorry, games generally take at least a half hour to complete and even longer if players keep being sent back to the start space. The original Sorry is not a terribly long game but it tends to drag on at times. A lot of people probably don’t like the original Sorry for this reason. Due to its’ really short length, the Sorry Card Game can’t drag on. The game is to the point and doesn’t overstay its’ welcome.

It is good that the game doesn’t overstay its’ welcome but unfortunately in most cases the game is too short. I played the four player version of the game and as I mentioned two of the three games lasted less than five minutes. With such a short game it is impossible to really implement any strategy. Since you can’t really use any strategy, luck determines who ultimately wins the game. If the game lasted longer you may have been able to strategically play your cards on your paths in order to increase your chances of getting to 15. With the game being so short whoever gets cards that combine to 15 first will very likely win the game.

One of the reasons that the game is so short is due in part to the lack of Start/Home cards used in the three and four player games. In four player games you only need to complete 2 home cards. You could theoretically win the game in four turns. Usually you will win the game in at most seven to ten turns. I am guessing that the game chose to only use two cards since they felt the game would be too long otherwise. Based on my experience the game would not have been that long even if the players had to complete four start/home cards. I honestly would recommend playing the four player game with four start/home cards. Unfortunately the game only gives you two yellow and three green cards so you will have to create your own cards if you want to play it this way. I really want to know how hard it would have been to print three more cards and let people decide how many start/home cards they wanted to use.

Adding to the reliance on luck is the fact that some cards are stronger than others. The four card appears to be the worst since you need to discard a card just to be able to play it. Meanwhile other cards let you get additional cards or additional turns which are both quite valuable in the game. Quantity of cards is important in the game since the more cards you have at your disposal increases your odds of getting your pile up to 15. The most inconsistent card is easily the card that lets you draw a “Sorry” card. The “Sorry” cards differ significantly in their value. They are always beneficiary but for example one card lets you complete one of the your start/home cards. Another card lets you take a card from every opponent which will get you quite a few more cards. Other cards have a minor impact on the game.

Sorry the Card Game has some flaws which mostly come from being way too short. This means there is little time for strategy so if you prefer strategic games you will not like the game. On the other hand the game is quick to learn and play. Sorry the Card Game is enjoyable if you want to play a game where you don’t have to put too much thought into your moves. In comparison to the original Sorry, I would say that the card game is better in that it is more concise and doesn’t drag on like the original game. I think the original game has more strategy though which isn’t saying a whole lot since the original game didn’t have much strategy either.