While we haven’t really looked at any building/model sets here on Geeky Hobbies, it is something that I have always been interested in. LEGO has basically been the leader in this space since it was first introduced, but there have been quite a few other systems created over the years. Some of these have been successful while others haven’t. Today I am looking at a new building system just released by PlayMonster called Snap Ships. This system uses a snapping mechanic where different pieces can be snapped together to create spaceships and other vehicles. This sounded like an interesting idea that I was intrigued to check out. Snap Ships could use a little more flexibility in the ship pieces, but the snapping system works surprisingly well allowing for quick, easy and fun assembling of spaceships and other vehicles.

The world of Snap Ships takes place in the distant future. The Komplex is a brutal race of aliens. They have used their advanced technology to take over many planets across the galaxy increasing their strength with each planet they assimilate into their empire. Not content with their current empire they have begun to encroach on Earth and the human empire.

To protect themselves humanity has formed a group of soldiers known as the Forge. The Forge commands a fleet of ships known as Snap Ships. Their ships are fast and are modular in design so they can be quickly altered to be ready for any fight. These ships are the last opportunity for humanity to halt the spread of the Komplex from taking over the rest of the galaxy.

Making the fight more interesting is the lost civilization of Uju Kon. The long lost civilization was way before its time creating advanced technology far beyond the tech of the Komplex and the Forge. This technology includes new powerful weapons and other ship upgrades. These upgrades are so powerful that they could make the difference in the fight between the Komplex and the Forge.

Based on the Opinion Bureau reviews, Snap Ships is a model building system that was recently released by PlayMonster. The product’s name tells you almost everything that you need to know about it. Each set includes around 40 to 120 pieces. These pieces include cubes and other parts which are used to create spaceships and other vehicles. Snap Ships utilizes a modular system which is based around cubes. Basically the system uses the cubes to create the main frame for the vehicle and you then attach other components to that frame. The system utilizes a snapping mechanic where the pieces either feature a peg or a hole (the cubes that form the frame feature both). To attach two pieces you just insert a peg into a hole and press the two pieces together until they snap into place. If you want to separate the pieces you just pull them apart and they will come apart. The sets include a tool that helps with this if two pieces don’t want to separate.

Here is an example of a couple of the blocks. As you can see some of the pieces feature a peg while others feature holes. 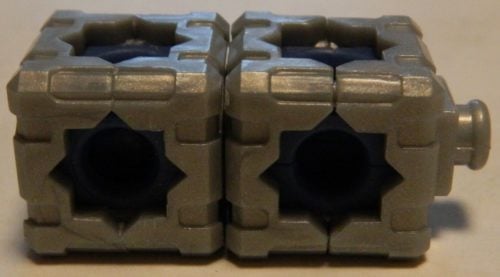 These two blocks have been snapped together using the peg on the left block and one of the holes on the right block.

I have to say that I was impressed with how well the system works. It is surprisingly easy to snap pieces together as you just press the two pieces together, apply a little pressure, and they snap into place. Taking the pieces apart is pretty easy as well. Some pieces are harder to take apart than others, but with the included tool you don’t have one of those situations where it is really hard to separate two pieces. You would think that snapping pieces together or taking them apart would put wear on the pieces. After a lot of use the pieces might show some wear, but the pieces are made of durable plastic where they should last for quite a while as long as you take care of them. I genuinely liked the snapping system and I want to see what can be done with it in the future.

As for the two models that we were sent by PlayMonster (Sabre and Scarab) I thought they were pretty good. They are two of the smaller sets as they have around 40 pieces each. There are other sets that are larger and include quite a few more pieces. The models aren’t super large, but they are a solid size. I thought the finished product was pretty impressive. Each set gives you instructions to build three different ships and vehicles. The instructions for each vehicle involves 10-20 steps with each step adding a couple pieces to the ship. I thought the instructions were well illustrated where it was pretty easy to see what you had to do to make the ship. The construction of the various Sabre and Scarab ships don’t take too long as I would say most will take between five to fifteen minutes. I am well above the target demo though so I am not sure how hard children will find the instructions. I can’t imagine children having any significant issues with them though as they are pretty self explanatory.

For those interested in the Sabre and Scarab sets here are some pictures of the various ships that you can make with the Sabre set. 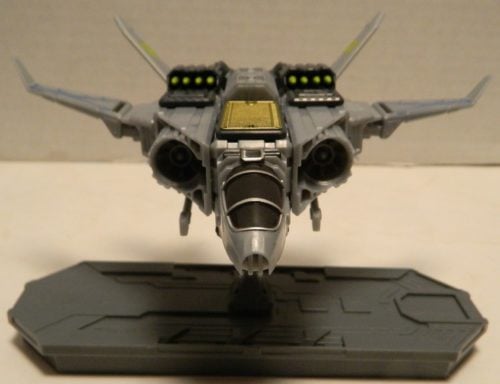 Here is a picture of the first ship that you can make with the Sabre set the Sabre XF-23 Interceptor. 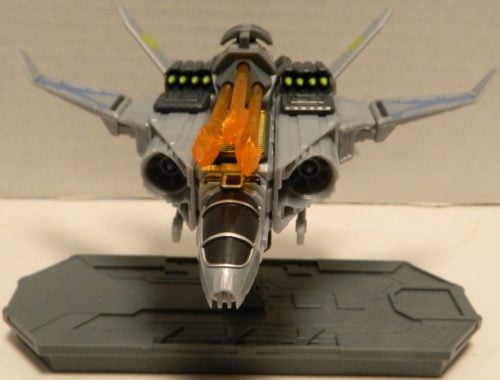 This is a picture of the Sabre XF-23 Interceptor with the UJU tech the UX-3R Hydra Lance installed. The orange parts are projectiles that can be shot out. 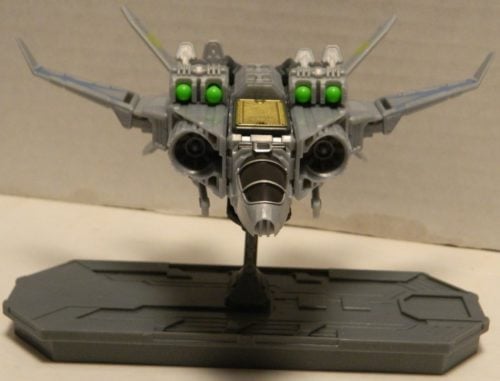 This is another way of altering the Sabre XF-23 Interceptor. The two weapons attached to the top of the ship feature projectiles that can be launched by pressing down on the buttons on top. 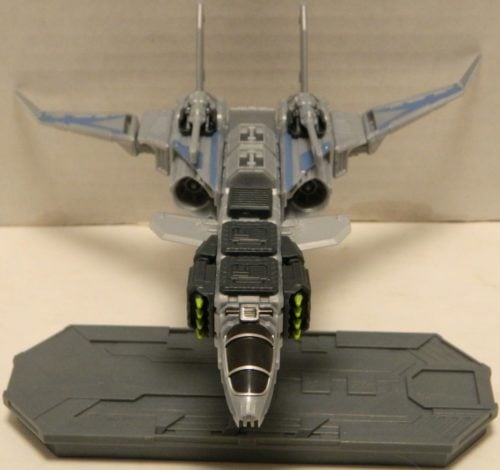 This is the second ship that you can create with the Sabre set the Sabre XB-04 Light Bomber. 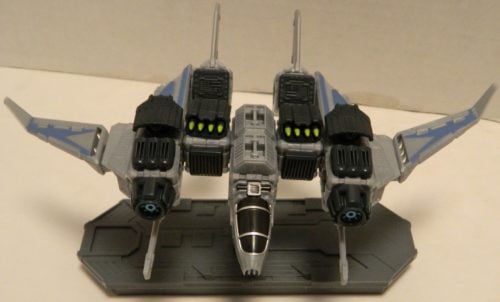 This is the final ship that you can make with the Sabre set the Sabre XR-01 Fast Recon.

Here are the ships that you can create with the Scarab set. 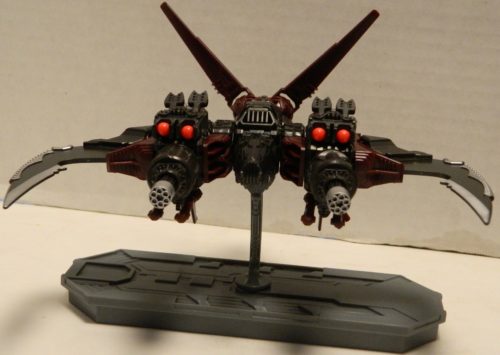 This is the Scarab K.L.A.W. Interceptor. The four orange bullets can be fired by pressing the corresponding button. 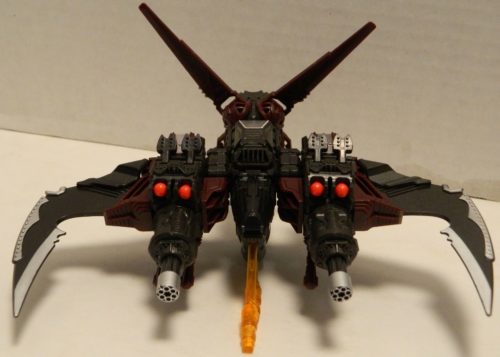 This picture shows the Scarab K.L.A.W. Interceptor with the UJU tech UX-Link Bolo Launcher attached to the bottom of the ship. 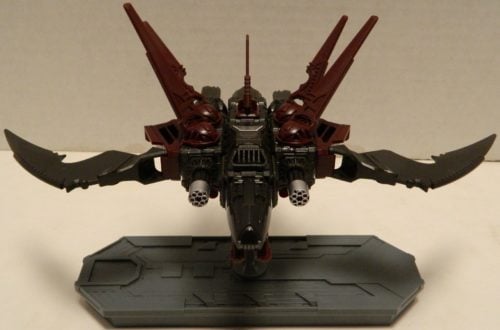 This is the Scarab K.L.A.W. Light Fighter. 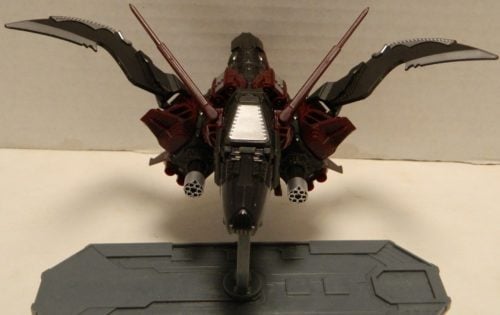 This is the third ship design included in the set the Scarab K.L.A.W. Attack Striker.

Of the two sets I would say that I personally preferred the Scarab set. This is kind of unexpected as I am the type of person to gravitate towards the “good guys”. I preferred the Scarab as it was just a more interesting set in my opinion. The set is a little harder to assemble, but it includes more interesting pieces and the ships are more creatively designed. When designing your own ships I think there will be much more flexibility with the Scarab pieces. Most of the Sabre pieces are stationary where you can’t adjust them. Meanwhile the Scarab allows you to adjust the various fins. The Sabre set was fine, but if I had to pick one I would say that the Scarab set was better.

Due to how the system is designed you have quite a bit of flexibility in designing the ship/vehicle that you want. Outside of the ship designs that come with each set, Snap Ships official website has additional designs that you can make. You can also mix pieces between the different sets to make your own creations including taking pieces from both Komplex and Forge ships. This gives quite a bit of flexibility to people who want to get creative and make a ship or vehicle of their own design. As many of the pieces are specially designed Snap Ships might not have the flexibility of LEGOs, but there are enough options where your creativity can flow.

Snap Ships can be displayed a models as you can use the top box cover as the base for a stand for your final creation. The ships seem to mostly be designed for play though. Kids who are into sci-fi should enjoy playing with the ships. The ships should stay together pretty well as kids play with them as the pieces as the snapping system is pretty sturdy. I would say that they shouldn’t break apart unless you drop or throw them around. The models don’t feature a lot of movable parts, but you can adjust some of the wings and you can rotate some of the pieces. Otherwise the vehicles include weapons that actually shoot out projectiles. The projectiles actually shoot farther than I was expecting. The projectiles that shoot out are kind of small though meaning they might get lost kind of easily. With smaller kids I would also be a little worried that they would shoot the weapons at each other which might cause some issues. The Scarab also features some semi-sharp parts that I would be a bit worried about if I was a parent of younger children that play rough.

Generally speaking for a new-to-market product line I was impressed with Snap Ships. I kind of wish the sets would include a few more pieces that are customizable as the system is not quite a flexible as LEGOs, but otherwise I found the sets to be well made. The snapping system works a lot better than I was expecting. It is really simple to attach pieces together and take them apart. Completed ships still feel quite solid though where they shouldn’t break apart unless they are dropped. With the weapons that launch projectiles I think children could have a lot of fun playing with the ships even though I would be a little leery of giving the ships to smaller children. The included designs are fun and easy to put together. Due to the snapping system though it is also really easy to make your own ships as you can easily mix and match pieces from different sets. If a building system that utilizes snapping pieces together to easily create your own ships and vehicles sounds interesting to you, I think you will enjoy Snap Ships.