Here on Geeky Hobbies we have looked at around 800 different board games. Most of those games were pretty much what I expected them to be. A few games were disappointments while others were pleasant surprises. When I first saw Slam Burger the game’s unconventional box immediately caught my eye. How could you not look at a board game packaged in what looks like a Happy Meal box. I can’t say I had high expectations for Slam Burger though as it looked like a pretty basic children’s speed game. As I learned more about what you do in the game though I was actually intrigued as the game looked interesting. It may not be for everyone but Slam Burger is a truly unique experience that is a hidden gem for families and fans of speed games.

How to Play Slam Burger

Slam Burger is played over a set of rounds. A round begins with the top order card being flipped over and read aloud. The players will then count down from three to start the round. 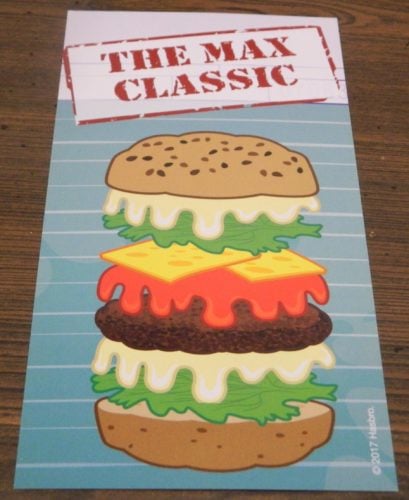 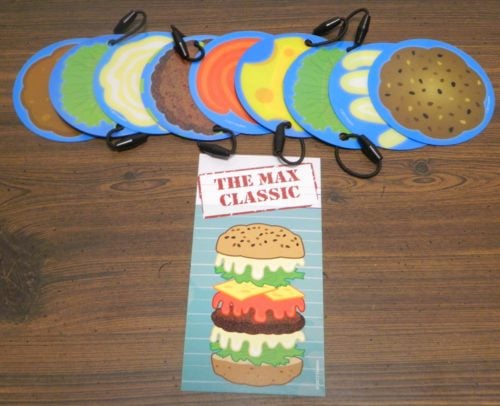 The players will then dissemble their burgers and place the tiles so everyone can reach them. If neither team has earned enough order cards to win, another round will be played.

My Thoughts on Slam Burger

After 800 different board games, it is quite rare to find a game that is truly original. While Slam Burger has some typical speed game mechanics, it is hard to deny that it is a truly original idea. Outside of trying to quickly diagnose a card to figure out what you need to do and then put that into action as quickly as possible, Slam Burger really differentiates itself from other speed games. This all comes from the process of creating your burgers.

I think the reason that Slam Burger succeeds is that the main gameplay is so satisfying. Basically the gameplay in Slam Burger is to create the burger shown on the current order card. Each order card shows a burger with a set of ingredients that have to be placed in a specific order. It is quite easy to place some of these ingredients as you just place the corresponding tiles with the right side face up on the table. Things get more complicated though as some of the ingredients are on gloves that the players have to wear. An ingredient is placed on both sides of the glove with each player wearing one or two sets of ingredients. When you get to an ingredient on one of the gloves a player will have to put their corresponding hand onto the burger with the appropriate side face up.

At first I thought Slam Burger was going to be a straight speed game where the team that moved fastest would win each round. Speed is important to the game but there is more to it than quickly assembling the burgers. This is due to there being a limited amount of each type of ingredient. The game was also quite clever in how it decided to divvy up the ingredients featured on the gloves. While this isn’t relevant for some of the burgers, quite a few of the order cards can be tricky in how they were designed. Some of the order cards require players to use each glove for a specific ingredient or they can’t successfully complete the burger. This is because both ingredients are needed from some of the gloves so you need to figure out which glove has to be used for these ingredients. This adds somewhat of a puzzle aspect to the game. You can’t just throw ingredients into the burger without putting some thought into how you are building it. For the gloves you need to figure out which sides you have to place face up in the burger. If you use one of the gloves for the wrong ingredient you won’t be able to successfully complete the burger. This requires some planning and cooperation with your teammates as you figure out how you need to use each glove. Figuring out how to use all of the ingredients can become a pretty interesting puzzle.

In addition Slam Burger has some dexterity mechanics. The game only allows you to use hands with gloves on them to pick up and place ingredients. This requires some nimble fingers as you try to place the individual ingredients while also using your gloves for ingredients. Early on in the burger making process you should have at least one free hand between all of the teammates which makes it easy to place ingredients. Things become much more difficult once players have used all of their gloves for ingredients. This forces the player to try to place the last ingredient(s) on top of the burger while also having the glove on their hand act as an ingredient. This sounds easier than it is as it can be quite difficult at times. We had quite a few rounds that were decided by which team could get their last ingredients on top of their burger first.

Before I played Slam Burger I thought the game had promise but I was a little worried because I thought the game looked really silly. Therefore I thought the game was mostly going to be for families with younger children.  In action Slam Burger is a really silly game and yet I still really enjoyed it.  I was genuinely surprised by how much I enjoyed Slam Burger as it is one of the better hidden gems that I have found. The game may be made mostly for children and their parents, but it was still surprisingly fun for adults as well. There is just something about the gameplay that is quite satisfying. Racing to assemble your burger before the other team is exhilarating as most rounds will be quite close. The main gameplay is just so much fun and is unlike anything else that I have ever played. The game is never going to appeal to people who think the premise sounds silly, but adults who are young at heart will likely have more fun with Slam Burger than they would have thought.

With how Slam Burger was mostly made as a family game, it shouldn’t surprise anyone that it is quite easy to play. As the game basically only has one mechanic, it doesn’t take long to teach the game to new players. You could probably teach the whole game in a minute or two including a practice round where you physically show what would need to be done to successfully complete an order card. Each round only takes a couple minutes as well which means games usually only take five to ten minutes. While I think you should play to more than three cards, Slam Burger is quick enough that you very likely will want to play a couple games before you put it away for another day.

There is a lot to like about Slam Burger but the game is not perfect.

Other than the game’s silly premise turning off some players, I would say the biggest problem with Slam Burger is the fact that it gets a little repetitive after a while. As the game only has one gameplay mechanic it is not that surprising that it feels like more of the same after a while. I could easily see playing a couple games in a row. At some point I could see the game getting a little repetitive though. At this point you will want to put it away for another day. Slam Burger might not be a game that you want to play for hours at a time, but it is a game that you will want to come back to every so often. Slam Burger will work as a good filler game for when you don’t have a lot of free time or want a break from more serious games.

The other problem that I had with Slam Burger has to do with the components. There are actually a lot of things that I liked about the components. The artwork is good and the game does a fantastic job with the theme. From the box that looks like a “Happy Meal” to the card holder looking like a fry container, I don’t think there is anything more the game could have done to support the theme. The component quality is not fantastic but they are good enough that they should last through extended plays. The problem that I had with the components is that the game could have done a better job differentiating some of the ingredients on the order cards. In particular it is quite hard to tell the difference between the two types of buns. Without comparing the two types of buns to the order cards it is hard to tell which bun goes with each order card. After you play the game for a while you adjust but I think the game could have done a better job differentiating between the ingredients.

Should You Buy Slam Burger?

While Slam Burger is not a perfect game I was genuinely surprised by it. The game’s premise might sound silly and it is, but there is something about the game that is so enjoyable. It is hard to put my finger on exactly why but I had a blast building the burgers. I have always been a fan of speed games and Slam Burger is unlike any other speed game that I have ever played. While the game is foremost a speed game, it also has some dexterity and puzzle mechanics. You can’t just slap your burger together as some of the gloves have to be used in a specific way or you can’t correctly complete the burger. Placing the last couple of ingredients on the burger can also be challenging. With how simple and quick the game is to play, Slam Burger is great for families. It can be a little too silly for some adults and can get a little repetitive at times, but even adults can enjoy Slam Burger. I have played around 800 different board games and Slam Burger is genuinely one of the bigger hidden gems that I have ever found.

If you have never really been into speed games or you think the premise behind Slam Burger sounds stupid, it probably won’t be for you. If you like speed games and either have kids or are a kid at heart yourself, I think you could be surprised by Slam Burger. I know I enjoyed my time with the game and I would recommend it to anyone who is at all interested in the game’s premise.

If you would like to purchase Slam Burger you can find it online: Amazon

May 2022 Blu-ray, 4K, and DVD Release Dates: The Complete List of New Titles