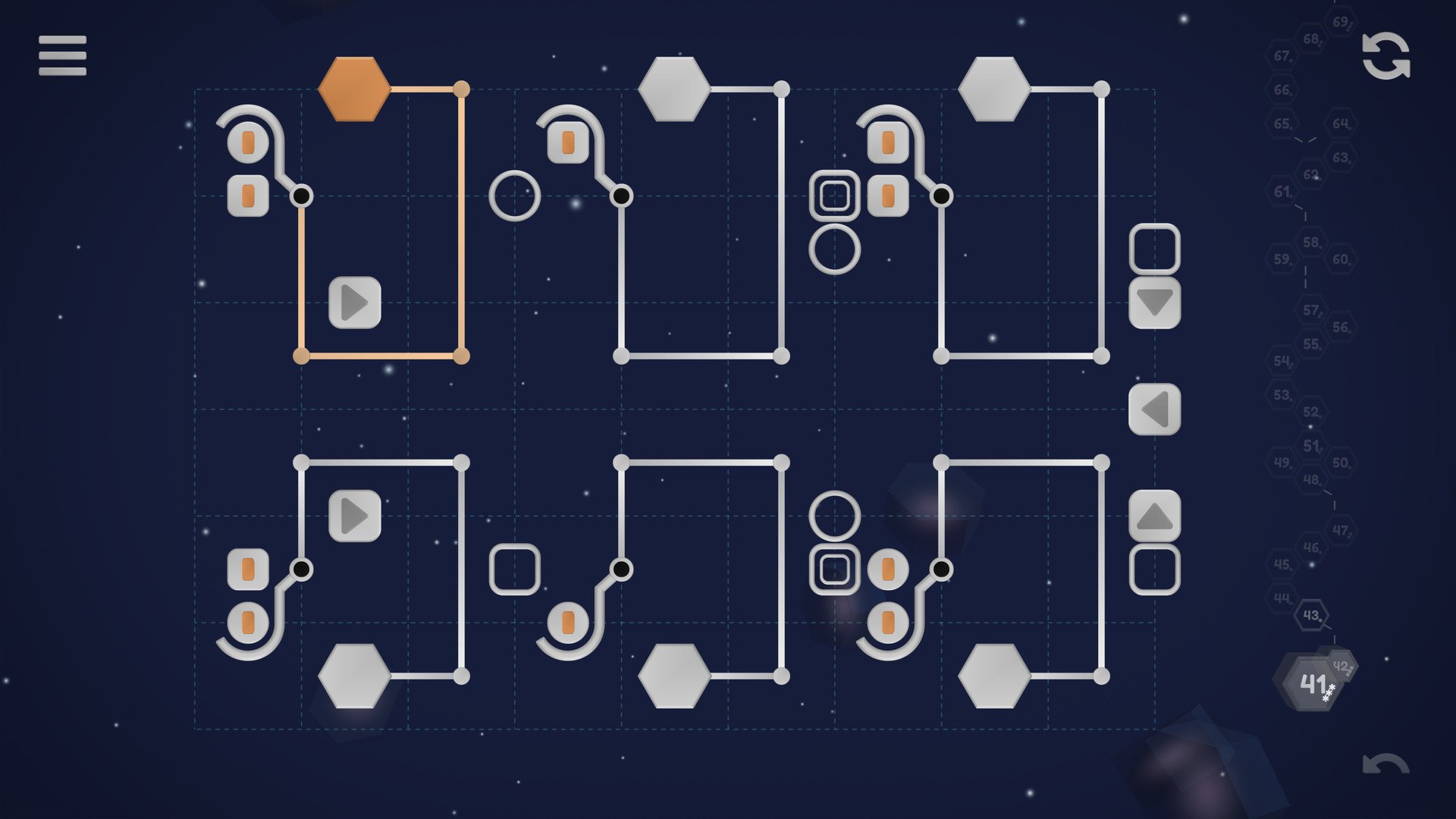 Around a year and a half ago I took a look at the original SiNKR. While the game was not perfect I was actually pleasantly surprised by it. The game may have looked pretty basic, but there was quite a bit of depth to the game. On the surface the game was really simple as you just pulled hooks which moved discs towards goals on the board. The reason why SiNKR succeeded was because the game did a great job using its simple mechanics in creative ways which lead to clever puzzles. The only real issues I had with the original game was that it was kind of easy and short. As I enjoyed the original game, I was excited to try out the sequel which came out today. SiNKR 2 is an improvement over the original game due to its minimalist style and clever puzzle design, but is still kind of short and easy like the original game.

SiNKR 2 is a true sequel to the original SiNKR as the gameplay is pretty much exactly the same. The basic premise of the game is to move square and circle discs towards goals of the same shape. To accomplish this you are given control over a group of hooks. When you press on the end of the hook, the hook will be pulled which will take any discs that it has collected with it. You use this mechanic to drag the discs towards their goal. As you progress through the game you are given additional mechanics which include flipping the position of the hook, blocks that send a disc in the direction the block is pointing, and even teleporters that move a disc to another part of the board. You must use all of these mechanics together in order to successfully move all of the discs to their goals without losing any of them along the way.

For those of you who haven’t played or read my review of the original game, I want to quickly address what I like about the gameplay itself. When you first look at SiNKR 2 it might not look like much of a game. The entire game is basically hooks and some basic shapes. The game’s minimalist style might not look like much, but underneath the surface it is a compelling puzzle game. SiNKR 2 is meant to be a game that you can just sit back and play while relaxing. There are no time limits on the levels as you can take as little or as much time as you need to solve them. The game is also quite simple to play as the mechanics are pretty self explanatory. The game doesn’t even need to use a single word to explain what you are supposed to do. Whenever a new mechanic is introduced the game gives you a couple levels which teach you how to use the mechanic. After those couple levels you should have a good grasp on how the mechanic works.

While I appreciate the game’s simplicity/minimalist approach, the reason that SiNKR 2 succeeds is that it does a great job mixing and matching its mechanics. On their own all of the mechanics in SiNKR 2 are really basic. SiNKR 2 comes up with some really creative ways to utilize the mechanics together though which leads to some really clever puzzle design. You have to think about what you are going to do on every move though as you can’t rewind when you make a mistake. The puzzle design in SiNKR 2 does a good job making you feel good about yourself when you solve a puzzle, while also avoiding becoming frustratingly difficult.

Outside of adding new levels, I would say that SiNKR 2 has two main differences from the original game. The first difference is that SiNKR 2 seems to have more polish than the original game. None of these changes drastically change the gameplay, but they make the experience more enjoyable. The biggest change in this area is that the game doesn’t force you to solve every puzzle in order to move onto the next level. SiNKR 2 has a path system for the levels. If there is a level that you can’t solve you can skip the level and go down one of the other paths to reach the next set of levels. The game even gives each level a difficulty rating so you can see what to expect from the level. While I don’t think any of the levels are too difficult, giving players the ability to skip levels that they can’t solve is a good idea for the game. This allows players to move onto a new puzzle instead of being stuck trying to solve the same puzzle over and over again until they finally find the correct solution.

The other improvement in SiNKR 2 is that I thought the puzzle design was better than the original game. I will preface this by saying that I haven’t played the original game since reviewing it a year and a half ago. While I thought the puzzles in the original game were good, from what I remember I think the puzzles in SiNKR 2 are better. Part of this is because the sequel does a lot more with combining the mechanics together to solve puzzles. Each new mechanic still has tutorial levels, but the game moves through them quickly. This allows the game to spend more time coming up with creative ways of using the mechanics together.

I really enjoyed playing SiNKR 2. Unfortunately just like the original game, SiNKR 2 still shares most of the same issues.

One of the biggest complaints that I had with the original game was that the puzzles were pretty easy. This issue hasn’t been solved in SiNKR 2 as I found it to be pretty easy as well. I do play a lot of puzzle games though so this might not be the case for everyone. I would say that SiNKR 2 is an easy to moderately difficult puzzle game. I would say that I solved around 80% of the puzzles within a couple minutes. Another 10% of the puzzles I solved in around five or so minutes. The final 10% took around five to ten minutes. On the positive side I like when puzzle games aren’t so difficult they become frustrating. On the other hand SiNKR 2 doesn’t give puzzle fans a huge challenge. If you don’t mind that the game is on the easier side, this is not a problem at all. If you wanted a challenge though you may be a little disappointed.

With the levels being pretty easy to solve, it also means that SiNKR 2 is not a very long game. SiNKR 2 is quite a bit longer than the original game though. It has a total of 87 levels. It took me around four hours to complete all of the levels in the game. If you skip some of the levels you should be able to shave off a little time maybe finishing the game in around 3-3.5 hours. If you have some troubles with some of the puzzles I could see the game taking around 4.5-5 hours. While SiNKR 2 is not a really long game, you can’t really complain that much as the game is only $3. Even if the game is kind of short, it is well worth its price if you like puzzle games.

The final complaint I had with the game is kind of nitpicky. The game sorta has a rewind feature that allows you to reverse some of your moves. I never really got the mechanic though as it seemed kind of random when it allowed me to use it. I kind of wish the game had a more robust rewind feature that let you reverse one move at a time. There were times when I would accidentally move one of the hooks one space too many. As there was no way to rewind the last move, I was stuck restarting the whole level. This can be kind of a hassle at times. The good news is that the levels are short enough that you don’t lose too much time having to restart a level.

If you don’t really care for puzzle games SiNKR 2 is not going to be for you. If you like puzzles games though or enjoyed the original SiNKR I think you will really enjoy SiNKR 2. At only $3 I would highly recommend that puzzle fans pick up the game.