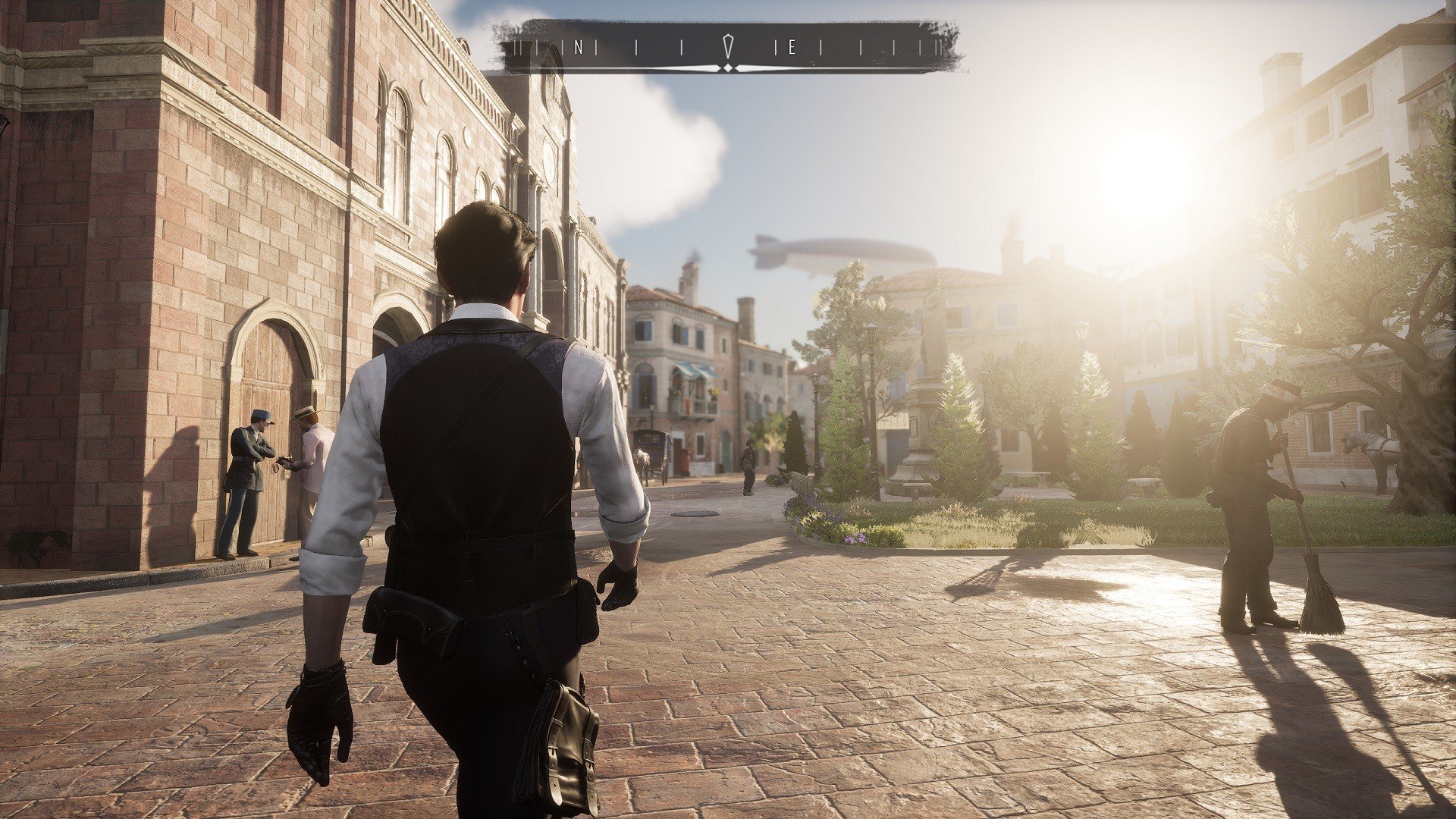 In Sherlock Holmes Chapter One you play as a young Sherlock Holmes. At the beginning of the game you arrive at the Mediterranean island of Cordona. As a child Sherlock spent time on the island with his family until his mother’s death. Years later you have decided to return to the island as something feels off about your mother’s death. Can you finally uncover the truth behind her death and in the process help solve a number of cases around the island of Cordona?

Not surprisingly since it is a Sherlock Holmes game after all, the game’s main focus is on solving various crimes/mysteries around the island. The investigation of each crime features a number of mechanics that you will use in order to acquire clues. You can investigate crime scenes. The game gives you a detective mode which helps point out things that you should investigate. Certain parts of a crime scene you can further investigate as you need to find specific items to interact with. When you find clues you can present them to suspects and witnesses in order to gather additional information. You can eavesdrop on people’s conversations which is a sort of mini game as you try to decipher what parts are actually important to the case. You even need to change your clothes and appearance in order to gain the trust of certain witnesses to obtain necessary information.

As you gather information you will occasionally visit your mind palace which basically works like a giant peg board as you try to connect various pieces of information. You basically choose two pieces of evidence that you have collected that you think are connected. If you are correct a new spot will be opened up in your mind palace and you might gain access to new clues that you can then use in your investigation. As you advance in a case you will eventually reach a point where you can solve it. Sometimes there will be more than one potential suspect and you can pick which one you think committed the crime as long as you have enough evidence to make the accusation plausible. You then are usually presented with options for how you would like the case to be resolved.

I mentioned at the beginning of this review that I never played any of the other Frogwares Sherlock Holmes games so I kind of went into the game not knowing what to expect. In a lot of ways the game plays like your typical mystery video game. You gather evidence and talk with suspects/witnesses in order to try and piece together what you think happened. In a way the game kind of reminds me of LA Noire. Any fan of a good mystery will likely have fun playing as Sherlock Holmes. The cases are mostly well designed where you have to think carefully and use your deduction skills to figure out what happened.

What distinguishes Sherlock Holmes Chapter One from your typical detective game is that it actually does a good job making you feel like a real detective. The game doesn’t hold your hand like a lot of games from this genre. The game basically gives you the initial details of the case and the clues that you have already acquired. You then need to figure out the rest on your own. The game gives you several different ways of acquiring information and even somewhat lets you draw your own conclusions on what actually happened. With how the cases are designed, you usually get a sense of accomplishment when you close a case. Anyone who is interested in a good detective/Sherlock Holmes game will likely really enjoy the game.

The fact that the game doesn’t hold your hand does lead to a few problems for the game though. The first is that the game has a learning curve especially for those that haven’t played Frogwares previous games. It pretty much took me the whole first case to understand the main mechanics behind how you investigate in the game. Basically the game utilizes a pin system where you need to select a piece of evidence/clue in order to use it to get more relevant information for the case. You could be talking with the right person or investigating the right area, but if you don’t have the right information selected you might not get the information that you need. Sometimes evidence or people that you want to talk to aren’t even around if you don’t have the right piece of evidence pinned. This takes some time to get to used to and could lead you to running around in circles if you don’t figure out that you don’t have the right piece of evidence selected.

While solving cases is the majority of Sherlock Holmes Chapter One’s gameplay, there are a couple other mechanics that pop up from time to time. The first is the open world mechanic. The game actually takes place in an open world where you can pretty much go where you want. The game’s map is not super large, but you will actually make your way to the scenes of crimes instead of just jumping from location to location as a case requires. While exploring you can acquire items to spruce up your home, you can hear from the locals about new cases, and you can even utilize the game’s fighting mechanics to take down gangs of criminals.

I had some mixed feelings about the open world elements of the game. On the positive side I do think it helps with the immersion of the game. Instead of just teleporting around from location to location you can actually arrive at the destination yourself. The game even takes advantage of this at times as it doesn’t always give you an exact address as you sort of have to figure out a simple puzzle to figure out where to go. I also think the city looks quite nice and pretty historically accurate. At times it is nice just moving around the city.

The main problem with the open world mechanics is that the game doesn’t do nearly enough with it. For the most part the open world only adds the small puzzles where you have to figure out where to go, and adds to the game’s immersion. Otherwise there isn’t much to the mechanic. Thus the open world feels kind of empty where you are just running through roads and alleys to get to your next destination. The game has quick travel points and you will likely eventually reach the point where you will think it is better just to fast travel to a location rather than run all of the way there. While this doesn’t hurt the game all that much, it kind of feels like a wasted opportunity.

The final mechanic in Sherlock Holmes Chapter One is a combat mechanic. Basically for combat you will occasionally get into fights where you will be ambushed by a number of people. Your goal in these situations basically involves either subduing/arresting or shooting/killing all of them. You are equipped with a gun that has unlimited ammo (outside of having to reload it). When you aim your gun the game will temporarily switch to slow motion allowing you to target highlighted areas of the enemy. Once you have hit all of these areas you can either just shoot the enemy killing them or you can temporarily stun them by shooting a nearby object and pressing a number of buttons in time.

While far from the game’s greatest asset, I personally didn’t mind these combat sections. In a way they kind of feel out of place, but I thought they could also be kind of fun. Basically they work as an exercise of avoiding the enemy attacks while you get rid of their armor and then arrest/kill them. While the game rewards you more for taking enemies alive, killing enemies is much easier and doesn’t have much influence on the game’s overall story. I can definitely see some people not really caring for these sections of the game. The good news is that these sections are actually totally optional as in the difficulty settings you can actually turn off the combat entirely and these sections are skipped.

As for the game’s theme and atmosphere I thought the game did a pretty good job. I ended up playing the game on PlayStation 5. Taking into account that the game was not made by a AAA studio, I thought the game looked quite nice. The locales and characters are pretty realistic. The game also does a pretty good job remaining loyal to the time period it takes place in. This does lead to some questionable stereotypes and mistreatment of minorities/women typical of the time period that the game takes place in. While probably pretty historically accurate, some of these situations were kind of hard to watch/deal with.

I found the story to be pretty good even though I haven’t finished the whole main story yet so I can’t comment on its conclusion. The main storyline is based around Sherlock trying to uncover the mystery of his mother’s death. Outside of this the story has a bunch of small to more substantial mysteries that you have to solve. Some of these are your typical Sherlock Holmes style mysteries, and others are kind of out there. This actually is a good microcosm of the entire game as it swings back and forth between being pretty serious and kind of silly. The characters are interesting. The game features a younger Sherlock who is arrogant and not afraid of saying what is on his mind. You are also joined by Jon (not Dr. Watson) who is the “comedy relief” and doesn’t take anything too seriously.

The length of the game is going to depend quite a bit on how you approach it. I haven’t completed the game yet so I can’t give you a definitive total. This partially depends on how quickly you solve the cases as you could end up taking a decent amount of time trying to figure out what you have to do next in a number of the cases. It also depends on if you are going to mostly focus on just the main storyline or if you are going to get into the optional content. If you are solely focused on the game’s main storyline, it can probably be finished in around 10-15 hours. The game has quite a bit of additional content from extra cases to things to collect. If you do everything that the game has to offer it likely will take closer to 30-40 hours. Generally if you like a good mystery and explore the additional content, I think you will get your money’s worth out of the game.

I haven’t played the other Frogwares Sherlock Holmes games so I can’t directly compare them, but I enjoyed Sherlock Holmes Chapter One. A lot of the game is built around finding evidence and solving cases. The game gives you a number of interesting ways of gathering evidence making you feel like a real detective. The cases for the most part are pretty good as well. The game doesn’t hold your hand though which leads to a learning curve and occasional times where you have no idea how to proceed. Outside of the mystery solving mechanics there is an open world mechanic which adds to the atmosphere but feels underutilized. The combat is interesting and kind of fun, but some people probably won’t be fans as they will find it to be more of a distraction rather than an addition to the experience. The game’s story and atmosphere are generally pretty good. The game’s length is also good if you like exploring the additional content.