When I was young one of my favorite board games was the original Sorry!. I have no idea how many times I ended up played it. As my family enjoyed Sorry! we ended up purchasing a copy of Shakin’ Sorry! at some point. While I remember playing and enjoying the game when I was a kid, I honestly couldn’t have told you much about the game before I recently played it again for the first time in probably 15-20 years. Originally created back in 1992, Shakin’ Sorry! is the first Sorry! dice game that was ever made. The basic goal of the game was to streamline the original Sorry!. As these type of spinoff games are usually not very good, I can’t say that I had high expectations for Shakin Sorry! despite enjoying the game when I was a kid. Shakin’ Sorry! succeeds in streamlining and simplifying the original Sorry! but takes it way too far leading to a game with next to no meaningful decisions.

How to Play Shakin’ Sorry! 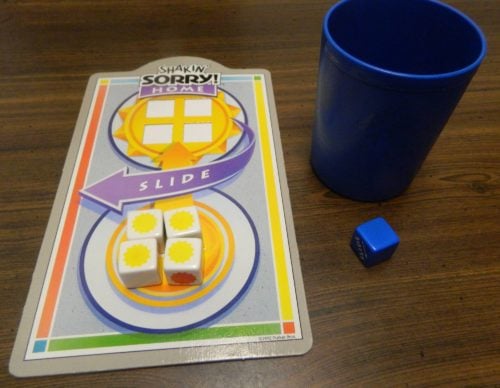 On this turn the yellow player will roll the four dice on their start space along with the blue die.

The player will then roll all of the dice. What is done with the white dice is dependent on what is rolled. 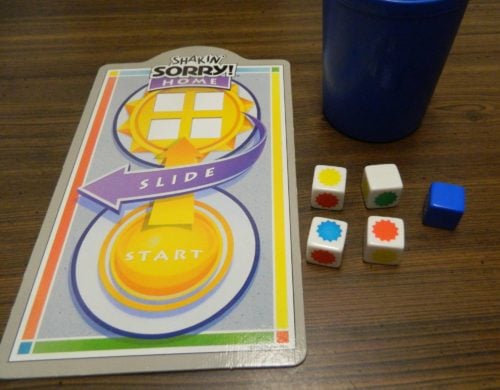 If the current player hasn’t won the game (see below), the next player clockwise takes their turn.

The first player to get four dice on their home spaces wins the game. 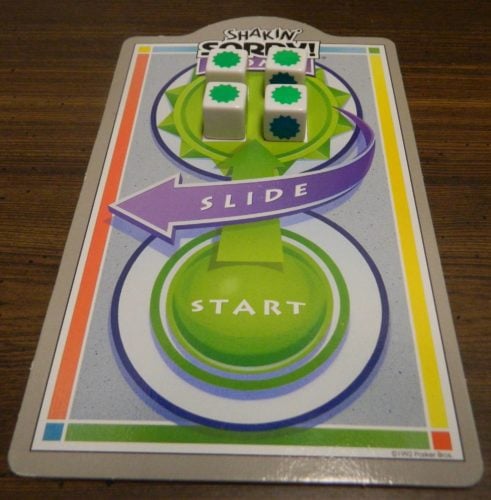 The green player has gotten four dice to their home section so they have won the game.

My Thoughts on Shakin’ Sorry!

As I already pointed out Shakin’s Sorry is basically Parker Brothers attempt to turn the original board game into a quick dice game. Instead of drawing cards to move around the board, you just roll dice to try and get four dice in your home section. It was obvious that this was an attempt to streamline the original game and it definitely succeeds with that goal. The original game normally took around 30 minutes to finish but you can usually finish a game of Shakin’ Sorry! within 5-10 minutes. While the game has a recommended age of 6+, I honestly don’t see how younger children couldn’t play the game as long as they don’t put the dice in their mouth.

The reason why I think younger children could play the game is that there isn’t much to the game when you look closely. The game for the most part plays itself. A player rolls the dice and the dice are moved to one of the gameboards based on what was rolled. Play then passes to the next player. This continues until one player is able to get four dice to their home section. With the game being so simple, it gets repetitive rather quickly as it feels like you don’t do much in the game.

There is literally only one decision you can make in the game and it only comes up about a sixth of the time. The only time you can have any impact on the game is when you roll the Sorry! symbol. This gives the player the ability to choose another player to steal a die from their home section. This decision can actually have a big impact on the game but it is usually a very obvious decision. First there are quite a few times when there is no decision to make as either none or only one of the players have a die in their home section. Thus the decision is already made for you. When there is actually a decision to make it is usually pretty obvious who you should choose. Unless you can somehow see the future and know who is going to win, you are usually better off just taking a die from the player that is in first. The only reason to make another decision is if another player plays earlier in the turn order or has a lot of dice to roll. It is a shame that with only one real decision, the decision is so obvious.

The decision of how to use a Sorry! are pretty obvious but they along with slides can have a huge impact on the game. As you only need to get four dice to your home section to win, losing a dice from your home can be huge. Of the two slides are more painful as your own roll is making you lose one of your dice. The Sorry!’s can be painful as well though as it allows players to gang up on the player that is in the lead. A player that can avoid rolling a slide or being hit by another player’s Sorry! has a very good chance of winning the game.

As there is next to no strategy in Shakin’ Sorry! it is not surprising that the game relies on a lot of luck. The few decisions you get to make won’t have much of an impact on the ultimate outcome of the game. This means the winner is likely going to be the player that rolled the best. Something that contributes to luck is the fact that there is no set amount of dice that you get to roll on your turn. Players who get lucky and have other players roll their color could end up rolling eight or more dice on their turn. Being able to roll more dice doesn’t guarantee getting more dice home but it doesn’t hurt. In most cases the players that are able to roll the most dice, were the players that ultimately won the game. I don’t know how the game should have handled it differently but I personally don’t think it is really fair that a player could end up not being able to roll any dice that could help them on their turn.

Shakin’ Sorry!’s components are nothing special but aren’t terrible either. The dice are decent but the symbols are just painted on instead of being engraved. This makes them more likely to fade off. I give the gameboards some credit as they were smart enough to create indentations on the home section where you could place the dice. Otherwise the gameboards are made of pretty average cardboard. The dice cup is a pretty standard dice cup. The biggest complaint about the components is that the box is considerably larger than it needed to be. The box is not huge but the game could have easily been put in a box half the size of the final box.

Should You Buy Shakin’ Sorry!?

At the end of the day Shakin’ Sorry! is another game that doesn’t live up to its inspiration. The only area where Shakin’ Sorry! is better than the original game is that it is streamlined which makes the game quicker and easier to play. Otherwise the original Sorry! is a better game. The biggest problem with Shakin’ Sorry! is that there just isn’t much to the actual game. Players basically just take turns rolling dice until someone gets four dice home and wins the game. The only time when players can make a decision rarely comes up and when it does it is usually pretty obvious what the player should choose. With few decisions to make, the game relies almost entirely on luck. Shakin’ Sorry! is not a terrible game but it is pretty boring at times.

If you want a dice game where you actually have to make meaningful decisions, Shakin’ Sorry! is not going to be for you. If you have younger children and don’t mind a game that you can turn your brain off while playing, you could maybe have some fun with Shakin’ Sorry!. I would only purchase the game though if you can find it for cheap.

If you would like to purchase Shakin’ Sorry! you can find it online: Amazon