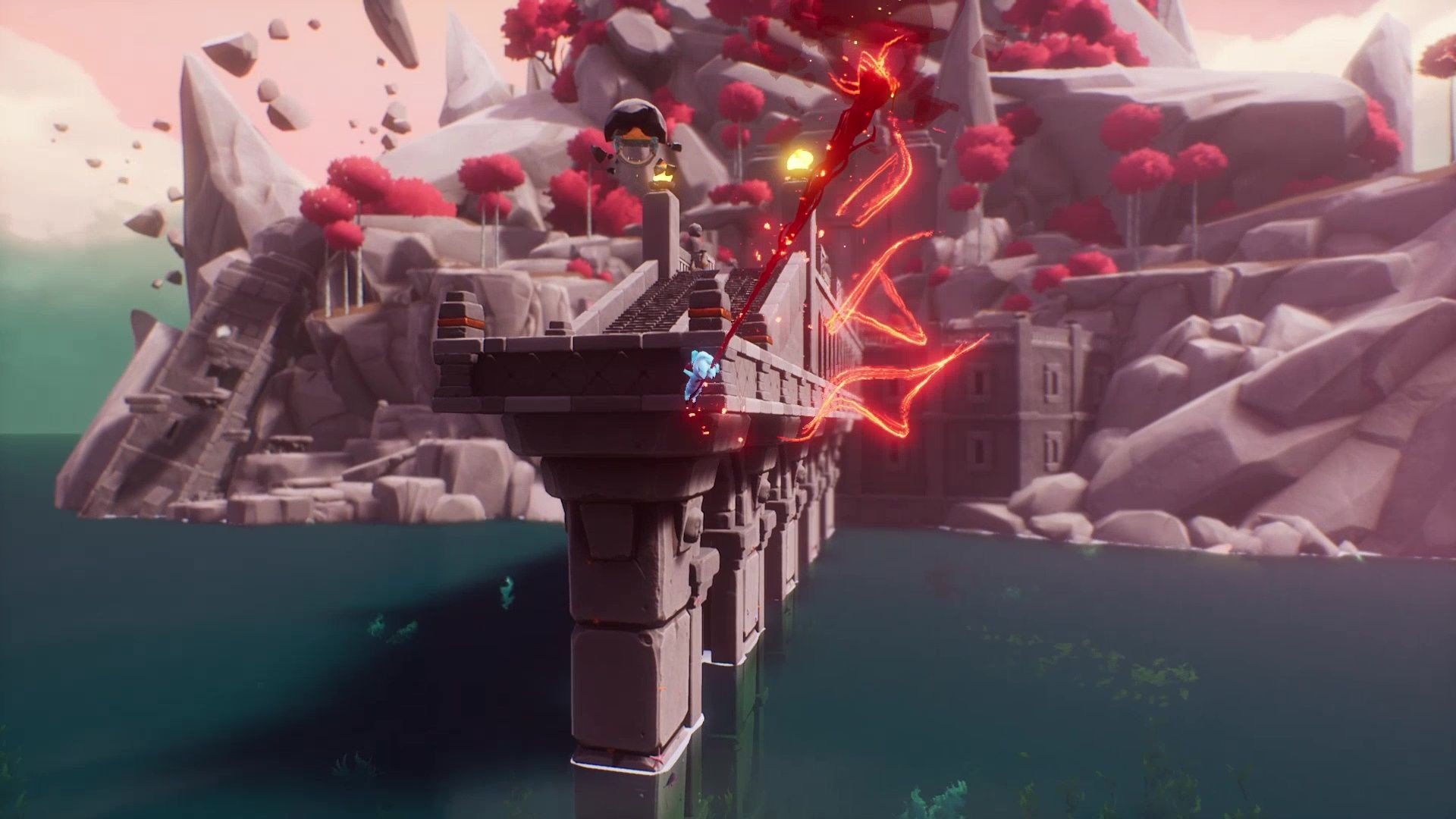 These days I honestly would probably consider myself to be more interested in the indie video game scene than AAA games. A lot of this has to deal with the fact that indie studios are able to make games that large studios rarely make anymore. Growing up I was a huge fan of 2D and 3D platformers which are almost exclusive to the indie scene nowadays. Because of this I like to check out most new games from this genre as long as they seem to have at least something unique about them. Between the style and the premise of using a sentient scarf in a platformer, I was intrigued by Scarf. Scarf combines satisfying gameplay with a colorful world to create an enjoyable game that is unfortunately a little too easy and short.

In Scarf you play as a blue creature who meets a dragon shaped scarf. The scarf has lost its mother as other creatures have taken its power to use for their own purposes. You must traverse three different worlds in order to retrieve the stolen power to reunite the scarf with its mother.

Scarf is a 3D puzzle platformer to its very core. There is no combat in the entire game. Instead the game focuses solely on platforming and puzzles. To begin the game you only have a single jump, but as you advance in the game you gain the ability to use the scarf in a number of different ways. Some of these abilities include a second jump, a glide, a rope, and a slingshot. You will use these abilities to jump between platforms in order to progress towards the stolen sources of power.

Along with the platforming is an emphasis on puzzle solving. The game utilizes a number of different types of puzzles as it doesn’t really have one go to puzzle mechanic. The puzzles include slide puzzles, figuring out the right order to interact with objects, and other types of puzzles.

At the surface level Scarf is not the most original 3D puzzle platformer. Outside of the idea of having a sentient scarf help you in your adventure, I can’t say there is anything gameplay wise in Scarf that I haven’t seen in other 3D puzzle platformers. While I generally prefer when games have some unique mechanics, I don’t see it being a big problem for Scarf.

It may not be highly original, but it didn’t really need to be. The game works because it has all of the elements that make for a satisfying 3D puzzle platformer. The game is simple and to the point instead of being filled with a bunch of basically meaningless mechanics. You have a number of ways to traverse the environment and some different puzzle mechanics to play with.

The main reason the gameplay works is probably because the controls work quite well. The game is pretty forgiving as you don’t need precise timing or perfect jumps to make it to the next platform. The platforming is really satisfying though. For a platformer to work the controls need to be responsive which is the case for the most part when it comes to Scarf.

At this point I want to talk about the game’s story. I am going to try and keep spoilers to a minimum. The game actually has two different endings which are quite different. The ending you get is determined by how many of the collectible inks/paints you collect during the game. If you don’t collect many of them, the ending kind of comes out of nowhere as a lot of the backstory is revealed when you collect the inks. Of the two endings, the ending you get if you acquire enough inks (I believe six) is considerably better in my opinion. That said I would actually recommend getting the “bad” ending first as I think it brings more context to the “good” ending. You don’t lose out on anything getting the “bad” ending first either since you can just load up your save and gather enough inks to get the second ending.

Combined with the story I thought the game’s style was also really good. The game only features three main worlds but each has its own unique style. The thing I liked most about the game is just its use of color. The game is quite colorful which is to the game’s benefit. The game may not have the visual detail/fidelity of a AAA game, but it makes up for that with style.

I enjoyed playing Scarf, but I had two main issues which kept it from being as good as it otherwise could have been.

Lets start with the game’s difficulty. I will preface this by saying that I play a lot of puzzle platformers so that could have had an impact on my thoughts on the difficulty. That said I personally found the game to be pretty easy. The platforming is not particularly challenging as the game is forgiving where you don’t need to make really precise jumps. If you ever fail a jump you will also only lose a little progress so there isn’t much punishment for failure. The puzzles are pretty straightforward as well were I didn’t really have much trouble solving them. The puzzle design is good, but they never really force you to approach them in an unconventional way.

The simpler difficulty leads to the other issue I had with Scarf. The game is on the shorter side. How much time you get out of the game will depend on a few factors. I would guess most players could beat the game within 3-5 hours though. If you take the time to find all of the collectibles it may take a little longer. Once you find all of the collectibles though, there is nothing else to do outside of playing through the game again. The short length itself is not necessarily bad, but I think the game would have benefited from having one more world to explore.

In general I enjoyed the time I spent playing Scarf. The game may not revolutionize the 3D puzzle platformer genre in any meaningful way, but it is still an enjoyable entry into the genre. The gameplay is quite satisfying. This is combined with an interesting and colorful world to explore. The story relies a lot on picking up the collectibles, but if you do the story is pretty interesting. The two main things that hold the game back is the fact that the game is pretty easy which leads to the game being pretty short.

My recommendation for Scarf comes down to your feelings towards the 3D puzzle platforming genre. If you don’t really care for the genre or are mostly interested in games that have a truly original concept, I don’t know if the game will be for you. If you generally enjoy good 3D puzzle platformers though, I think you will get enough out of the game that you should consider picking up Scarf.

How to Play Wonder Woman: Challenge of the Amazons Rules and Instructions